We started in January with Conan the Barbarian (see our stream of consciousness rewatch here) and then followed it up in February with TRON (look back on its legacy here). In March we reminisced about The Secret of NIMH, a classic fantasy from the legendary animator Don Bluth (click here to read all about it). In April we talked about the forgotten gem The Sword and the Sorcerer (we reflect on its overlooked history here), and in May we celebrated the great Jim Henson passion project, Dark Crystal (read all about it right here). June and July featured Sylvester Stallone hits, the First Rambo movie, First Blood, and the third Rocky movie, while August focused on the gem of the Star Trek movie franchise, The Wrath of Khan.

In the fall we turned our attention to Ridley Scott’s sci-fi masterpiece, Blade Runner, as well Steven Spielberg’s ghost-directed ghost-film, Poltergeist. Last month took us to the frozen wasteland of Antarctica and the special-effects mania of The Thing.

Our series ends with a movie that’s not necessarily befitting the winter months; it came out in the middle of June, during the busiest summer of the 1980’s. Several of the movies previously discussed were released right around the same time as this one, but none of them had the impact of this one, none of them resonated with ticket-buyers like this one, and none of them made the bank that this one made: 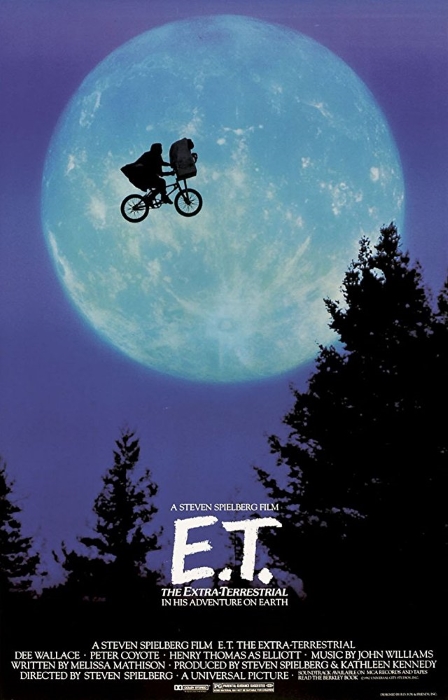 I am a lover of movies. I can sit down and watch Charlie Chaplin one minute, and switch over to Quentin Tarantino the next without batting an eye. I can enjoy schlock, tear-jerking drama, a brilliant spoof like Airplane, a juvenile indulgence like Ace Ventura, an epic like The Godfather or a light-hearted romp like The Mummy (1999). Nothing is off limits; as long as it does what it sets out to do I will enjoy it. As such it’s hard for me to list my “ten favorite movies of all time” because the entries change regularly. Those who follow this site know that my reviews tend to fall on one extreme or the other; I either hate a movie for failing to do anything, or I love a movie for accomplishing whatever goal it set out for itself. I love movies, so when a movie is done well I usually fall head over heels for it.

But if you put a gun to my head and asked me to name my number-one favorite film, I would not hesitate. Numbers 2-10 may flip and flop but number one has been number one ever since I was a five year old boy at his grandmothers house, when someone turned on the TV and I saw a squatty little alien trick-or-treating with a butcher’s knife-murder-victim, a ghoul and a cowgirl. It was well past the half-way point in the film; I had no idea who anyone was, what was happening or why, but I was instantly enamored with the movie due to the perspective that Steven Spielberg used in shooting the trick-or-treat scene. He shot it through the eyes of the alien; you can even see the cut-out eye holes of his costume in front of the camera. Watching that moment unfold through his eyes allowed my five year old self (without understanding what was happening) to relate to something that is, on the surface, so ugly and…well, alien looking.

After finishing the movie I insisted on seeing it again, this time from beginning to end. Thankfully my mother nurtured my love of film, and let me rent a movie from the video store every weekend. E.T. was the choice the next opportunity I had, and after seeing it again, I was hooked.

I’ve probably seen the movie three hundred times since then, and I still fell the same sense of anticipation when Elliot tosses his baseball into the dark unknown only to have it be tossed back. I still feel the same tight-chested sense of dread when the astronauts storm Eliott’s house looking for E.T. And I have no shame in saying I still well-up with tears when the bikes go flying and John Williams’ score swells to its beautiful crescendo. I’m a little teary eyed just typing it

E.T. is rightly considered—by critics and “unbiased” reviewers, rankers, and observers—one of the finest films ever made. It’s one of the rare examples of a movie that dominated the box office, struck a chord with movie goers but also was not a cheap movie that relied on the lowest common denominator of humor or storytelling. The Transformers movies have done huge box office too, but no one’s shedding tears about Bumblebee. 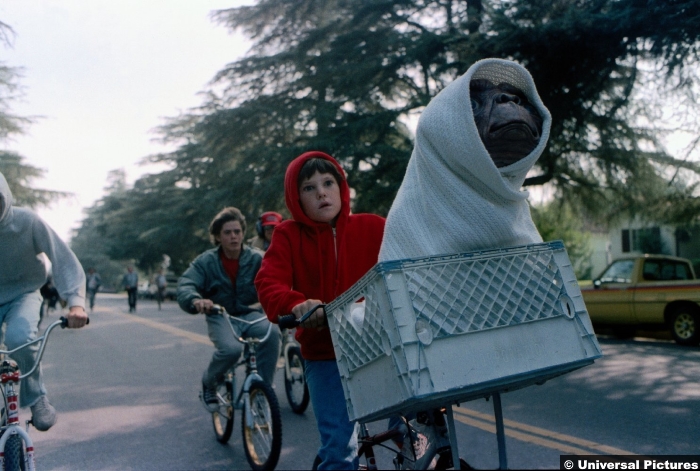 E.T. is a great and highly acclaimed movie to everyone else. It deserved all the awards and recognition it received. To me, it could have been a flop and I wouldn’t care. E.T. is not a movie to me, it’s a time machine. It’s a little window to my childhood, to the sights and sounds of the simpler, happier, era that existed when I came into this world. It’s a movie about a boy who makes a friend and in the end has to say goodbye when his mom comes to pick him up to go home. It’s so primal, so simple, so rudimentary, in lesser hands it might have been ruined with cheesy dialogue, over the top try-hard drama and emotional beats that missed the mark. Instead it was handled with care by the only director who could have made it work, the only director to understand how to package and deliver “child-like wonder” as effortlessly as a trumpet player can play taps.

Other reviewers can talk about Spielberg’s directorial decisions, and praise his camera choices from a clinical, unbiased reviewers perspective. I can’t do that. The movie is too attached to my soul. As a child I didn’t notice that most of the movie was framed from Eliott’s four-foot perspective, where much of the camera work is waist-high (for adults) and where every major emotional beat happens through Eliott or his siblings and not an adult. When he’s lost and near death we see his mother panic but we see it as his little sister sees it. When E.T. comes back to life we experience the joy through the reaction of his older brother. When we must focus on an adult, such as the mysterious “keys” who is hunting the alien, the framing is always distant, tilted upward, as though we are quiet children; companions of Eliott watching everything unfold beside him. If you watched the movie for the first time as an adult, you’d probably shrug and say “yeah that makes sense; what’s the big deal?” It’s hard to appreciate it for the first time as a thirty-year old, but as a five year old it resonates in ways that aren’t going to be understood by a mind that young. But even though a child can’t understand it, he can definitely feel it. As the movie is played through a child’s eyes, the child watching doesn’t just watch it; he experiences it vicariously.

I felt it. It’s been almost thirty years since I felt it for the first time, but I’m thankful I was exposed to it when I was. It has stuck with me all this time. I’ve carried it through elementary school, through high school and college, into adulthood and parenthood and have passed it on to my children, who have had the same wide-eyed terror at the astronauts that I had, the same chuckles at the “release the frogs” scene as I had, and the same palpable euphoria that I had when I first watched with child-like wonder, as bicycles took to the sky.

E.T. is still awesome, thirty-five years later, and as long as I live it will stay that way too.