We started in January with Conan the Barbarian (see our stream of consciousness rewatch here) and then followed it up in February with TRON (look back on its legacy here). In March we reminisced about The Secret of NIMH, a classic fantasy from the legendary animator Don Bluth (click here to read all about it). In April we talked about the forgotten gem The Sword and the Sorcerer (we reflect on its overlooked history here), and in May we celebrated the great Jim Henson passion project, Dark Crystal (read all about it right here). June and July featured Sylvester Stallone hits, the First Rambo movie, First Blood, and the third Rocky movie, and two months ago we looked back on the gem of the Star Trek movie franchise, The Wrath of Khan.

In September we talked about Blade Runner, a film that came out on June 25, 1982. On that same day another movie was released and it too would struggle to stand out against the mighty shadow of E.T.: John Carpenter’s THE THING. 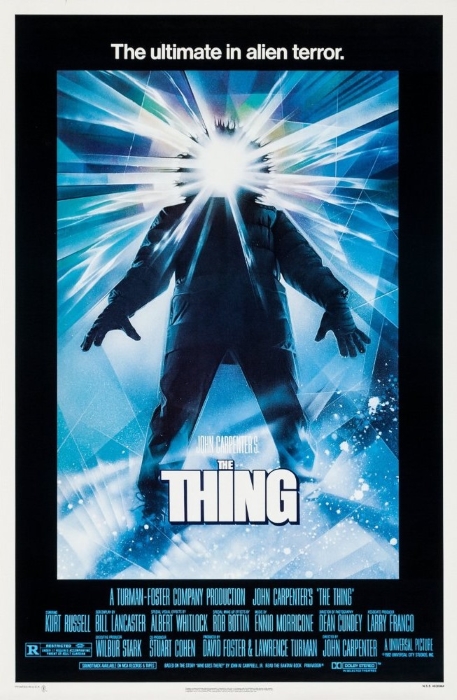 At the time of its release, THE THING was met with disdain from critics and disinterest from ticket-buyers. The film—a remake of the popular 1951 sci-fi—was seen the way many remakes and reboots are today, with people saying “we don’t need this movie” and “the original was better!”

The original was mostly a cold war allegory, drawing on the fear that communist infiltrators could seep into western society and “spread the red” across the United States. In that movie, the titular “thing” was a humanoid-looking alien/monster played by Gunsmoke’s James Arness. The people stationed at the arctic base were a mixture of scientists and virtuous military men proudly waving the red white and blue. Perhaps the biggest contrast between the original and Carpenter’s 1982 remake is the lack of ambiguity or mystery. The villain in the original is not a shape-shipter or body-duplicator and in the end he’s vanquished in a nice and tidy happy ending.

Carpenter laughs at your nice and tidy ending.

His version of THE THING is an open-ended question built around the subject of paranoia and how it cripples us. The movie begins, mysteriously enough, with a helicopter tracking–and trying to shoot down—a husky racing across the arctic frontier. Actually that’s not right: The movie really begins with a spaceship landing on earth, but we’re not given any context relative to that. We don’t know (yet) when in history that ship arrives on earth. It’s a minor teaser before the film-proper begins. The husky manages to elude the shooter and, in what will go down as supreme luck in favor of the dog, the shooter acts a little too hysterical with his rifle and ends up getting himself shot, leaving the crew of the Station none the wiser about the true identity of the canine. 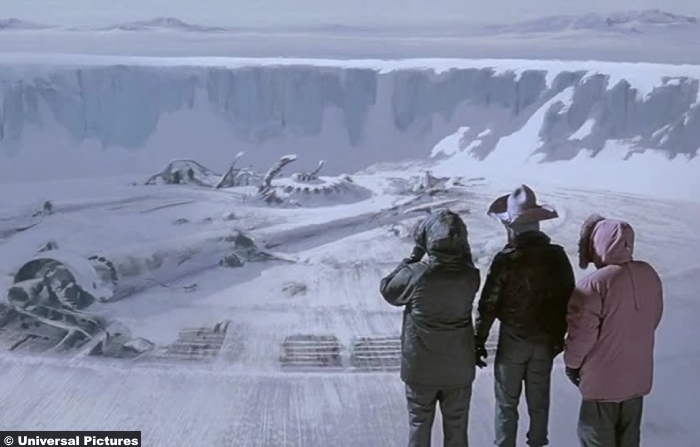 Anyone watching the movie for the first time, with no particular knowledge of what happens next, will likely be shocked at what happens to that adorable dog. The scene where it splits in two and begins assimilating the other dogs in the kennel is abruptly edited, shockingly presented and remarkable effected. It, along with the follow-up scene between Blair and Clark, serve as a template for the rest of the movie. Blair realizes before anyone else that the Thing reproduces a perfect copy of whatever life-form it assimilates, meaning it could duplicate the body of anyone and there’d be know way of knowing who until it was too late. As he says that his gaze drifts onto Clark and lingers for a second too long, causing Clark to turn defensive.

It’s a tense scene that shows how quickly paranoia and suspicion can turn colleagues into enemies.

The rest of the fast-moving film plays like a mystery, only instead of it being a “who done it,” it’s a “who is doing it” as the perpetrator is still at large. And since he can create perfect duplicates, the monster could suddenly be someone who was on “your” side just one scene before. 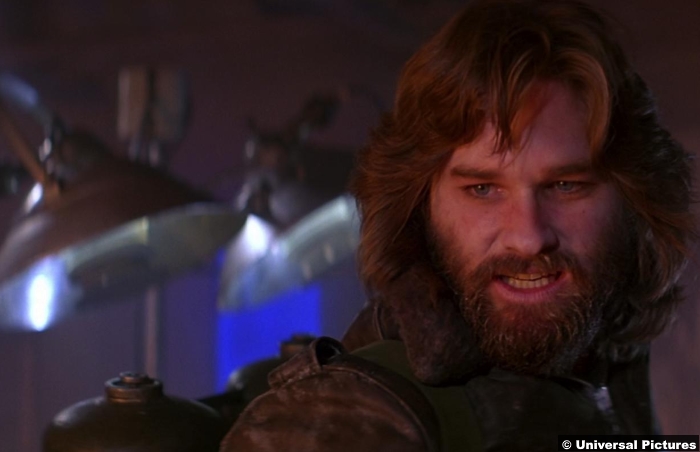 The premise of the movie is so simple (shapeshifter hunts and is hunted by isolated scientists on an arctic research station) and the actual beats of the story are so basic (it’s just a series of scenes where characters shout accusations broken up by scenes were the monster attacks everyone) it really shouldn’t work, but it does because Carpenter gives both sides of the movie their own feel. The shouting/paranoia-fueled scenes are played for maximum tension with Ennio Morricone’s score pounding away at your ear-drums. You think that at any second the shouting is going to turn monstrous, with the Thing lunging for an attack, but that never happens. The Thing only attacks when its cornered or when it’s alone with a potential host. To that end, Carpenter wisely framed each reveal of the Thing in a different way every time; this way it never becomes repetitive and mundane. 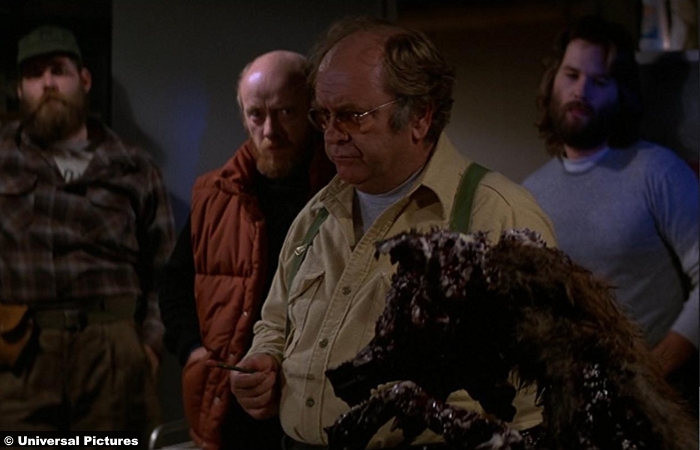 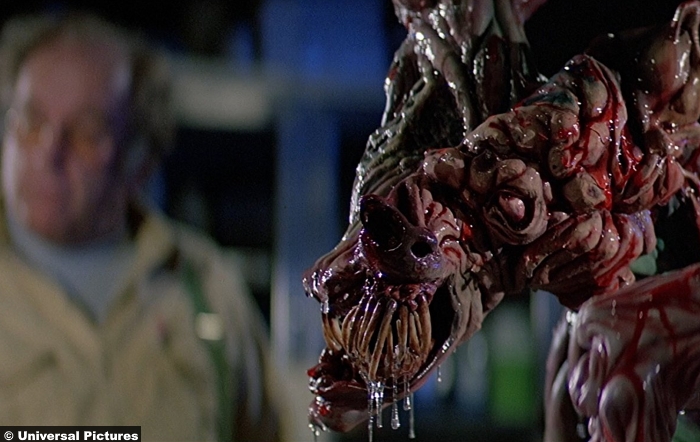 The dog splits open and begins protruding tentacles after an abrupt edit and hard cut. It’s jarring, sudden and we don’t have time to process what we’re seeing before it’s already mid-way completed.  When The Thing takes George it’s obvious what’s happening before we see it. The music and other visual clues alert us to it before we actually see the tentacles wrapped around his body. Vance grabs his chest and winces a few minutes before he reveals himself, so we’re waiting for the shoe to drop but it’s still a surprise when his chest bursts open and takes a bite out of (and off) Dr. Coopers arms. Palmer is revealed during the infamous blood sample scene where you first get a whale of a jump scare (when the blood reacts to the hot wire) before the gross transformation scene afterward. And then there’s Dr. Blair who pops onto the screen and attacks so suddenly he might as well be Jason Voorhees. No two attacks are the same and each one is wonderfully, grotesquely effective (the practical effects work is better and more real than anything you could do on a computer, and the CGI-infested remake in 2011 is proof-positive of that).

But it all comes down to the ending…

All anyone ever wants to talk about is the ending.

Is Childs The Thing? Is Mac? Could they both be? Are neither of them?

People who argue that Childs is will point to his breath (or lack thereof). Mac is spitting steam with every syllable but Childs produces nothing. But what proves too much proves nothing at all; if Childs was The Thing then he’d be a perfect copy of Childs, right down to his breath. John Carpenter himself, who has been very coy about the ending, said that the breath was just a matter of the lighting and other technical issues on set and not some clue one way or another. Furthermore, if you look closely you can see his breath when he first approaches Mac and asks him “are you the only one who made it?” and “Did you kill it?”

The other point people make concerns the bottle that Mac hands Childs. Those who say Childs is The Thing will say he was drinking kerosene or gasoline (from a molotov cocktail that Mac had been making earlier). The Thing would—they presume—not know the difference and thus would drink without reacting to it. That’s why, they say, the music kicks in right as he drinks and why Mac laughs right after. It’s all circumstantial evidence however and doesn’t hold up to scrutiny. If you remember back at the beginning of the movie, Mac is playing chess with his computer and he’s drinking alcohol straight from the bottle…the same bottle featured at the end. Furthermore the molotov cocktail bottles he’d been making were smaller and without a label, unlike the bottle he offered to Childs.

So what about Mac? Could he have been The Thing?

When? How? He was never out of the audience’s sight after the blood test scene. And besides, why would he kill the other Thing in the scene just before? Throughout the movie it’s established that the alien is almost a slave to self preservation instincts. That theory makes far less sense than the previous one.

What about both? Maybe they both were The Thing and they were discussing their plan to freeze themselves and wait to be found. Except the movie very clearly establishes that the various spawns of the Thing work as a hive-mind, which means both Thing Mac and Thing Childs would both know what they were, so they wouldn’t speak so cryptically toward each other, if they’d even speak at all.

Maybe neither of them were The Thing. Maybe the movie ends with the two heroes having defeated the alien but sacrificed themselves in the process. Here’s the problem with that ending: It’s too clean. It’s too pat. It puts the focus of the movie on the “victory” found in killing The Thing when, in my opinion, that’s not the point of the film.

Remember the scene early on, when the Thing Dog enters one of the rooms and we see a shadow turn to face him? Based on the way the movie progresses that shadow is supposed to belong to Palmer but in fact John Carpenter brought in an extra to stand in place of Palmer’s actor because he wanted to throw people off. That goes to show you that the intent of the movie is not to reveal but to mislead. The purpose is to make you question not give you answers.

So about the ending: Personally I think the ending was intentionally written and directed so that there isn’t a clear answer. Every bread crumb trail you want to follow leads to a contradictory conclusion. You’re forced to say it’s one or the other or both or neither without being 100% sure, thus putting you in the role of the paranoid characters of the movie. The movie isn’t about overcoming the Thing, it’s about how the Thing turns you into a paranoid boogieman-chaser unsure who is real and who isn’t. The point of the final scene is to show that, even in the aftermath of a great victory (blowing up the Blair Thing, which was the most souped-up version), the two remaining men refuse to celebrate; they’re too entrenched in distrust and suspicion…and so are we.

But whatever side of the fence you’re on the one thing that’s certain is that you have a side. The Thing brings that out of us. It may have been rejected thirty-five years ago but time has been very good to it. Today it’s rightly seen as one of the very best sci-fi horror films and a masterpiece of atmosphere, suspense and practically-done special effects. It’s one of the best examples of a movie growing into cult status and it’s still awesome…