After three weeks of Ally screaming in our faces, this week we instead got a closer look at how Kai works his magic. For that, we go back to election night.

Beverly (Adina Porter), the local reporter we’ve seen a few times, is covering the turnout. It turns out (ha) that she needn’t be there, because they won’t be using her that night. Meanwhile, the younger reporter Serena (Emma Roberts), who is busy usurping Beverly’s spot, will be with Bob (Dermot Mulroney) back at the station doing election analysis.

Ivy and Ally are in line, as are Winter, Harrison, and Meadow. Everyone casts the votes you’d expect. Ally votes for Jill Stein, for example, and Meadow voted for Oprah. Kai helps in Gary (Chaz Bono), whom we’ve seen as the cashier at Ally’s local grocery. He is bleeding and can barely stand but he’s determined to vote. When he does, we can see that he’s freshly missing a hand. 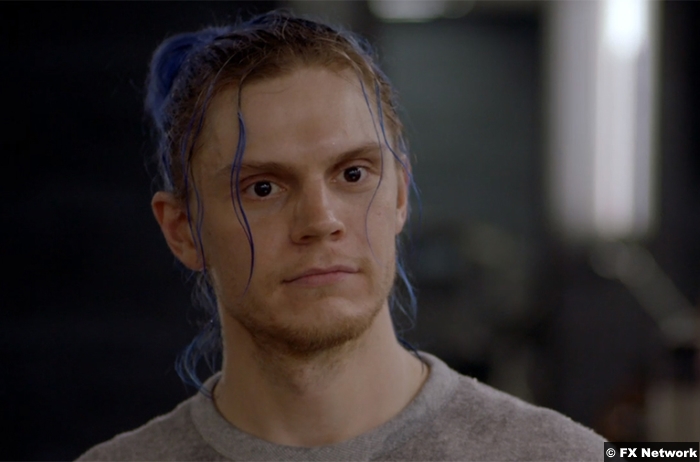 That way is murder. With Kai’s encouragement, Harrison kills his boss. When Meadow comes home to the men in the bathroom of their weekly rental motel room, where Harrison is dismembering the corpse, she’s too devastated by her own life to blink much. She’s just offered to sleep with two randos for a hit off their joint. (Rando #1 just gave her the whole joint, instead.) When she asks Harrison who Kai is, he tells her Kai’s someone to believe in. I’m glossing over this, but this is exactly what I was talking about with the last episode–this is how a cult leader or any master manipulator hooks people. 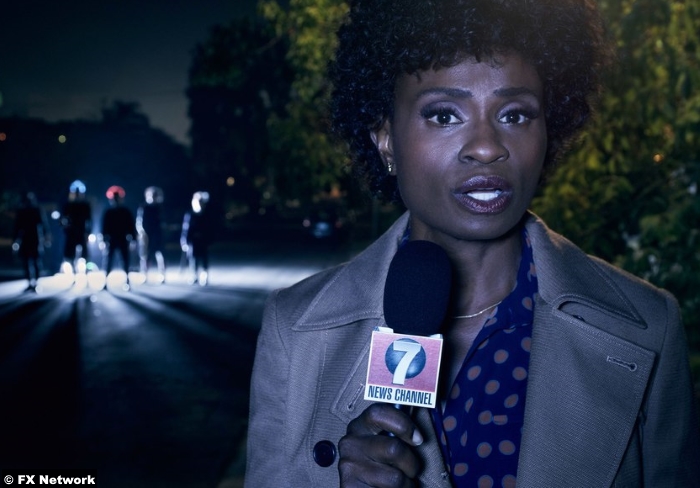 Beverly also needs someone to believe in. She caught Kai’s eye after he found out she’d briefly been checked into a nervous hospital after she got violent on the air. It started when an idiot yelled, “Grab her by the pussy” when she was doing a remote. [Shades of this (NSFW) clip, obviously.] Then other idiots started doing it, until she attacked one live on air. That moment went viral with the full autotuned treatment.

When Kai finds her, she’s slashing Bob’s tires. He offers to buy her a cup of coffee and that’s when he lays out his plan and the plan he has for her. She’s to be the propaganda wing, using her position to promote his message. She brushes him off, because she doesn’t see what he can do yet. He’s talking about world domination, starting at the city council level, but there’s not even a vacancy on the council. 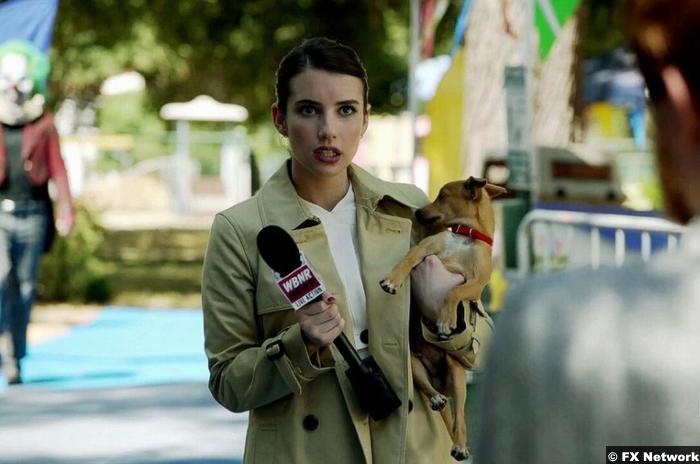 Her brush-off lasts only as long as it takes for Serena to be murdered by a trio of clowns. She’s holding a puppy at the time, as she’s doing a bit on an adoption push, and I’m pleased to report that the puppy is fine. That’s despite the nasty things Serena said about him. Yes, she insulted a puppy and was then killed.

The insane clown posse seems to comprise Kai, Harrison, and Meadow, the latter of which designed those unnerving clown masks and is praised effusively by Kai for her talent. See what he does there?

Anyway, that’s all it takes for her to turn up at Kai’s house, telling him, “I believe in you.” It’s telling, though, that when they embrace and she repeats her goal–“equal power”–Kai’s reassuring her does not seem sincere. He’s not interested in equal power; he’s interested in being the king of fear mountain. She can’t see his eyes, though, so she falls right into place, delivering a news bit about Harrison’s boss’s head being found in a homeless encampment. Should we be worried about the violent homeless?

Going back to the beginning, at a rally the night before the election, Ivy gets into a scuffle with Gary. He grabs her crotch, which gets Winter’s attention. I don’t recommend you grab anyone’s junk, but if you must–don’t–and definitely don’t do it while you’re driving a vehicle with your company’s logo on it. That’s how Winter and Ivy track him down. It may seem odd that Ivy was so easily talked into kidnapping Gary, but the basic plan isn’t that wild. They kidnap him, handcuff one wrist to a pipe, and leave him in a deserted home’s basement for a bit before they call the cops to come rescue him. Just scare him a little.

Of course, the reveal that Ivy knew Winter before hiring her as a babysitter puts a new spin on what happened between Winter and Ally. Unless Ivy knew about it all along, she’s now facing double betrayal. But I think it was all part of the plan and she knew. It gives her a reason to leave Ally alone and scared.

Winter helped Ivy feel empowered and Kai does the same for Gary. He whips into such a frenzy about the humiliation he’s felt because of his politics and his gender and his orientation and his race that it’s Gary who saws his own hand off just so he can make it to the polls. Because after all, the political is always personal.

9/10 – Hoo boy, this is the best episode of the season so far. Getting a closer look at how Kai is building his power and his base may demystify him, but it doesn’t make him any less disturbing. That’s because now we know that he holds no particular allegiance to Trump or any politician–he just wants to build fear.

Now for random details. It’s kinda weird that nearly all of the female characters have names that relate to the natural world–Ivy, Meadow, Winter. That includes Beverly, because I just learned the delightful fact that the name is from the Old English for “beaver clearing,” which makes the incidents that drove her to the brink very on-the-nose. Ally, which is short for Allyson, is the only exception. Are they making a meta comment there on people who call themselves allies?

In an unrelated note, Kai has a prescription bottle on his desk and I have an idea about who wrote that prescription.