This week’s episode was full to the brim, with a brutal murder, feral children, and the truth about the Lost Colony, yet it still didn’t feel like much happened.

We begin shortly after the end of last week’s episode. The police retrieve Flora’s jacket from the tree and then commence a grid search, in which Lee, Matt, and Shelby participate. Lee is the first to find something, and it’s ominous. 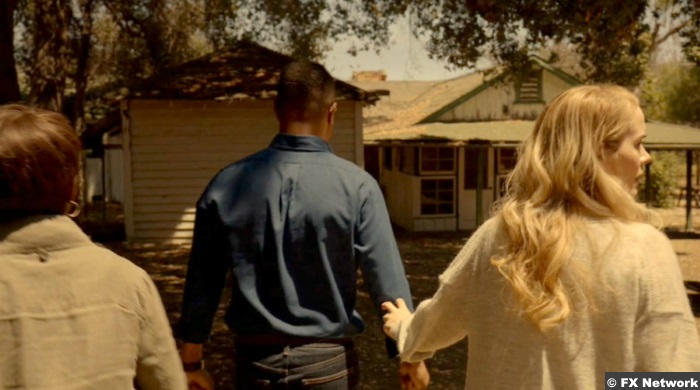 Specifically, she finds a disgusting tableau, with parts of Flora’s doll arranged on the ground with pig parts. They all continue searching the woods and stumble upon a ramshackle farm. The farmhouse looks like it hasn’t been inhabited in some time–there’s a lot of rotting food–but the trio hears noises coming from the barn. In it, they find the aforementioned feral children trying to suckle from a dead sow. It’s more like Porcine Horror Story at this point.

The children are taken to the hospital, but despite the best efforts of a therapist, they’re not exactly founts of information. In fact, they can say only one word: “CROATOAN!” So yep, we’re doing this.

The Millers head back to the house, with Lee’s ex Mason (Charles Malik Whitfield) in tow. He doesn’t believe Lee’s story, thinking instead that Lee is hiding Flora somewhere, using the story of the disappearance as a cover. He doesn’t explain why Matt or more importantly, Shelby, would also participate in the coverup. Instead, he just storms out, intent on sharing his suspicions with the cops.

The next thing we know, the police are indeed calling, but to tell Matt that they’ve found a body. It’s Lee who identifies the (burned and tied to…a wheel?) body as Mason and in all the hubbub, Matt doesn’t pay attention to the notifications from the motion detectors at the house. When he watches later, he sees Lee leaving shortly after Mason and returning four hours later. Lee denies she had anything to do with Mason’s murder, but where was she, then? 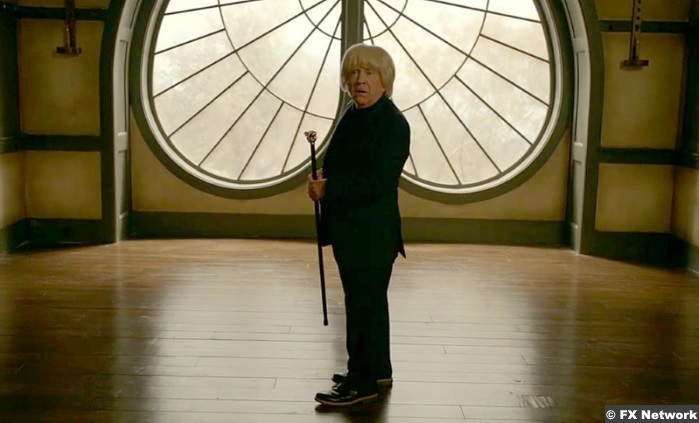 While they’re all yelling about this, enter Cricket Marlowe (Leslie Jordan). He’s a psychic, with a hairstyle that looks like a more subtle version of Gary Spivey’s. Or when Frank became an artist on It’s Always Sunny in Philadelphia. Or Coconut Head from Ned’s Declassified School Survival Guide. You get it.

Earlier this week, I inhaled the first episodes of the podcast In the Dark. It’s about the investigation into the 1989 abduction of 11-year-old Jacob Wetterling.. In episode 4, The Circus, the show talks about all the people, like psychics, who came out of the woodwork to descend upon the Wetterlings. Jacob’s mother Patty said that people would ask if they’d contacted psychics and she said that you don’t have to go looking for them. They find you.

This is what I was thinking about after Cricket appeared: the vultures that appear in the wake of traumatic situations like missing children. A law enforcement officer on the podcast related that police will sometimes listen to alleged psychics because they may have actual info on the case and are trying to distance themselves by claiming they saw it in a vision. So at its worst for the police, it’s a waste of time. For families, I’m not sure the possible damage is measurable. Think about Amanda Berry’s mother dying with the belief that Amanda was dead, because “psychic” Sylvia Browne told her so. (Or think about any of these other examples.) There may be (and probably are) alleged mediums out there that have good intentions. But what’s the road to hell paved with, again?

Of course, AHS is a world in which we know that fantastical things are true. However, the characters don’t know that yet, so accordingly, the Millers are skeptical of Cricket. They do allow him to hold a seance, though, particularly because he tells them that Flora is not with the living–she’s with a dead girl, Priscilla. (That’s her imaginary friend from last week.) He tries to contact Priscilla, but keeps being blocked by Kathy Bates’s character.

Cricket would be pleased as punch to go on helping Lee, with just the small matter of payment. It’s a mere $25k and he takes all major cards. The Millers are aghast at this and order him to leave, but not before he says something to Lee that shakes her. Shelby thinks it might be about Lee’s first daughter, Emily, who went missing at four and is now apparently dead. Not a great track record, Lee.

Lee does end up going to Cricket and giving him the money, where we learn Bates’s character’s identity. She’s Thomasin White, the wife of the governor of the Lost Colony. She is homicidally attached to the land. This doesn’t make sense to Lee, because they’re inland and every schoolkid knows that the Colony was on Roanoke Island.

But that’s not the real story! When Governor White leaves for England for more supplies, he puts his wife in charge. The colony is on the verge of starving, which leads to mutiny. Some of the men, including Thomasin’s reluctant son Ambrose (Wes Bentley), banish Mrs. White to the wilderness to die. She’s saved by a woods witch (Lady Gaga), to whom she pledges her soul. Then she returns to the Colony, earning herself the nickname “the Butcher” when she slaughters a few men, and announces that the Colony is moving inland. They’ve been there in some form ever since, they’re not very friendly, and they really hate pigs, apparently. 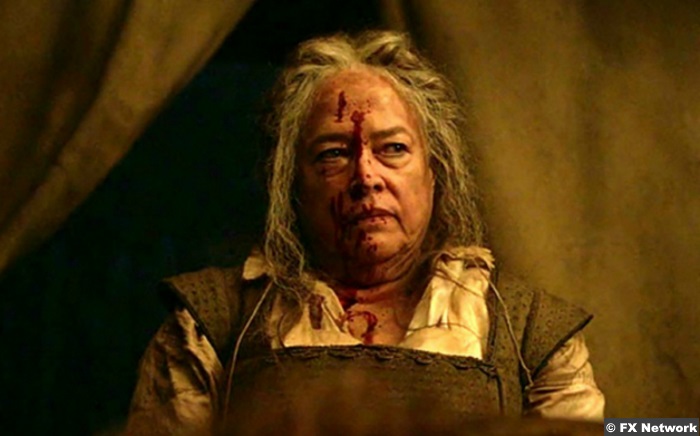 Cricket leads the trio into the woods to broker a deal with the Butcher. The Millers will leave the land and burn down the house in exchange for the return of Flora. Shelby is livid at this last detail, but Lee says that Matt agreed. Matt, however, has left the scene. Shelby finds him, in a trance-like state, having sex with Lady Gaga the witch while two local yokels watch. The real Matt claims no memory of this. Shelby returns to the house, where she seems to be more upset about the potential loss of the house than you know, her husband’s bad romance. Is the witch’s magic at work, too? In fact, Shelby’s so mad that she’s told the police about Lee’s absence during Mason’s murder, and they haul her off to jail as the episode ends.

7/10 – It feels like a lot happens in this episode, but it’s all smoke and mirrors.  Or smoke and pigs, rather. The plot advances very little. However, the reveal about Emily comes with a glimpse at the inner workings of the show within the show, offering a possible preview of where the season is going from here.