At this point in a typical American Horror Story season, everything has gone off the rails. This season, they’ve apparently decided to lean into that instinct with the much-discussed Big Twist that would take place during the sixth episode.

Surprisingly, it works. Directed by Angela Bassett, the episode is by far the best episode of the season. The twist itself is pretty whelming, but the overall effect is kind of hilariously brilliant. It was guessed by many viewers that the twist would be that we would see the voice behind the camera/the reality show behind-the-scenes stuff. They were right in that we did see that, but they had no way of predicting how bonkers it got.

But first, let’s check in with AHS superfan, my sister.

“So, what do you think of this season?

“Good. I like it so far but I’m still trying to figure out what’s going on.”

So it’s like any season of AHS. I’m glad we checked in! 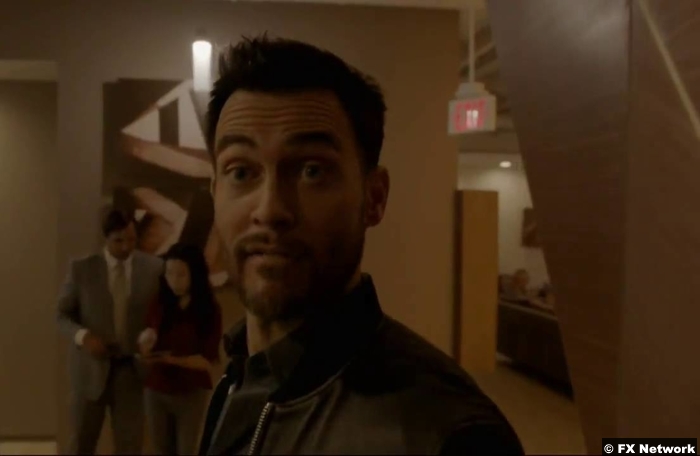 In this episode, we officially meet Sidney James (Cheyenne Jackson), the producer of My Roanoke Nightmare. We’ve heard his voice in previous episodes, asking questions of the real Millers during their segments of the show, but this is the first time we actually see him. And he’s a maniac. Apparently, MRN has become a cultural phenomenon and Sidney is driven by the quest to make the followup an even bigger smash hit. As for the blueprint for the followup, one of the characters references Big Brother, but it feels more like The Real World to me. Basically, he wants to cram the Millers and most of the reenactors from the show in the Roanoke house during the Blood Moon [sigh], and see what happens when ghosts stop being polite and start getting real. In the journey to this, we meet the reenactors as their true selves. Sarah Paulson is a British actress named Audrey Tindall, who’s recently wed Rory Monahan (the actor played by Evan Peters). Meanwhile, Matt’s actor, Dominic Banks (Cuba Gooding, Jr.) has recently been making time with the real Shelby Miller. (The Millers are apparently estranged in real life.) Finally, Angela Bassett’s true character is an actress named Monet Tumusiime. They all will be living in the house with the Millers and with Lee, who reports that Flora’s paternal grandparents are now petitioning for custody. Not invited to the house but likely to show up anyway is Agnes Mary Winstead (Kathy Bates), who took her role as the Butcher straight off the deep end.

They are all gathering in the house for Return to Roanoke, the new show, where Sidney plans to record what naturally happens and obviously, serve as an agent provocateur to make things interesting. We’ve seen this, the machinations behind the scenes of reality shows on programs like Unreal, but this is American Horror Story, so expect everything to get real weird real fast. Of course, there are the foreboding incidents before filming even starts. In a scene that echoes the accident that troubled the construction of the house, a crew member operating a chainsaw appears to turn the machine on himself. Of course Sidney doesn’t take this as the warning it is and instead, pushes ahead with production. This incident is, however, enough to frighten off Sidney’s business partner Diana (Shannon Lucio), who flees the property. She records her flight, because why would you do something if it were off-camera? 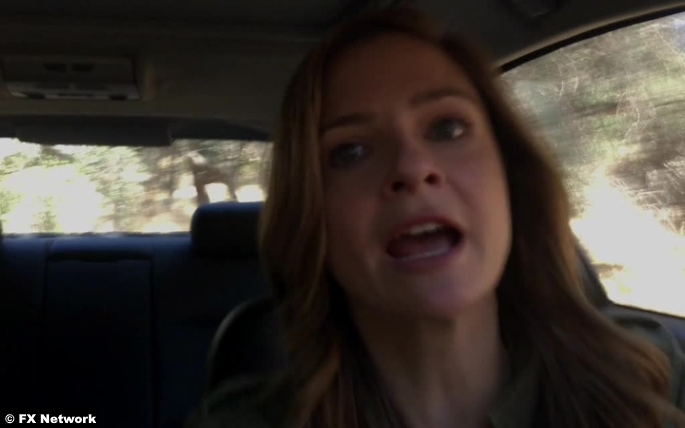 She sees Priscilla as she’s leaving, but she smartly doesn’t get out to investigate. Unfortunately, that doesn’t save her, because the Piggy Man is in her backseat. Goodbye, Diana. The crew has rigged the house with fake scares, but a circle of fetal pigs outside the house takes them by surprise. So we’re back to Porcine Horror Story, I see. Sidney blames the pigs on Agnes, who claims she knows nothing about it, and then drops the news on her that she is not invited to the Return to Roanoke. So she will almost certainly show up.

With the cast and their inspirations assembled in the house, it doesn’t take long for things to get even weirder. Matt and Dominic immediately get into a fight, which must have the producers salivating. Someone runs around the outside of the house banging on the walls. It’s assumed to be Agnes, but you know what they say about assuming. Audrey is startled in the shower by the Piggy Man, but is it really him or as she believes, Sidney? Rory goes upstairs to check it out, where he’s quickly dispatched by the angel of death nurses. Aw, they finished their word! 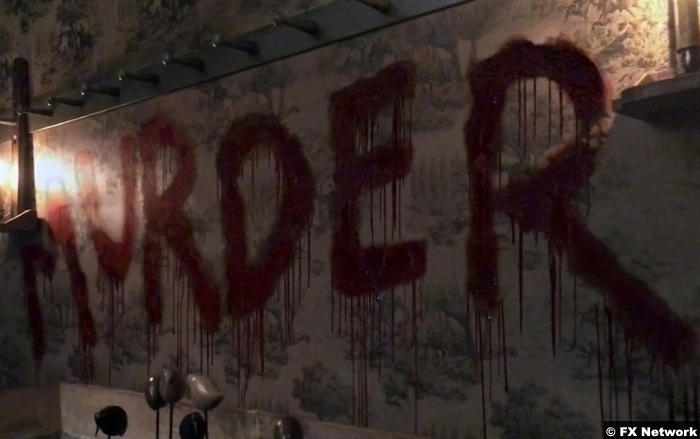 Matt informs the rest of the group that the R has appeared, signaling that the only person in the house with an R name is dead. And that is the end of the episode.

Oh, wait. I forgot to tell y’all about the real twist. You see, this is all kind of found footage. Everyone in the house died. Except one. Now that’s a twist.

9/10 – Finally, the show does something surprising and it works out well. Like I said, this was definitely the best episode of the season and if they can keep this up (I know, I know), it will put this season up there with the best.