After stagnating in the first half of the season, then kicking things into high gear with the Big Twist of last week, momentum c ontinues unabated with this week’s outing of American Horror Story. As promised last week, everyone but one person dies on the Roanoke property.

And if you were thinking that airing those kinds of events was in exceedingly poor taste/exactly the kind of thing that Sidney would do, you were half-right. Sidney, along with a cameraman and another production person, are quickly dispatched off this mortal coil by Agnes.

Back in the house, Audrey refuses to believe that the R in “MURDER” is for Rory, believing instead that he jetted off to LA for a big opportunity audition. The pool of blood? Sidney’s manipulation. 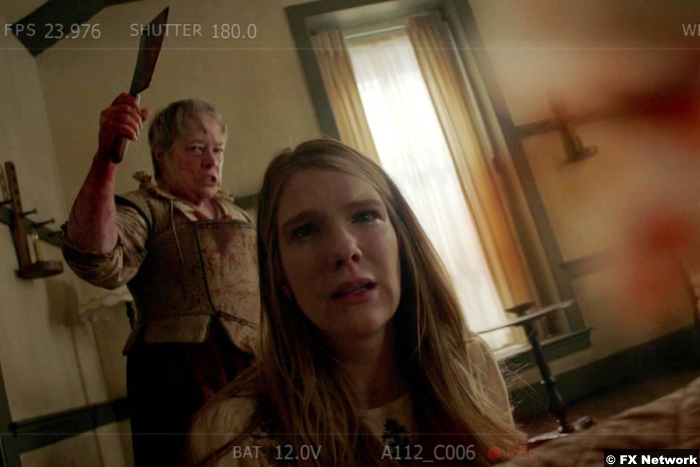 And they could go on thinking it’s all part of the game, until Agnes shows up and tries to butcher Shelby. Nothing kicks things into a higher gear than attempted murder! Shelby is saved at the (very) last moment by Dominic, which is really contrary to his brand, because as he’d told us in the confessional, he’d come on the show to be the antagonist. People may hate the villain on reality shows, but the villain gets camera time.

And again, that’s all most of these people seem to want. When Agnes is finally taken out by the real Butcher, those are her last words. “I just wanted to be on TV.” 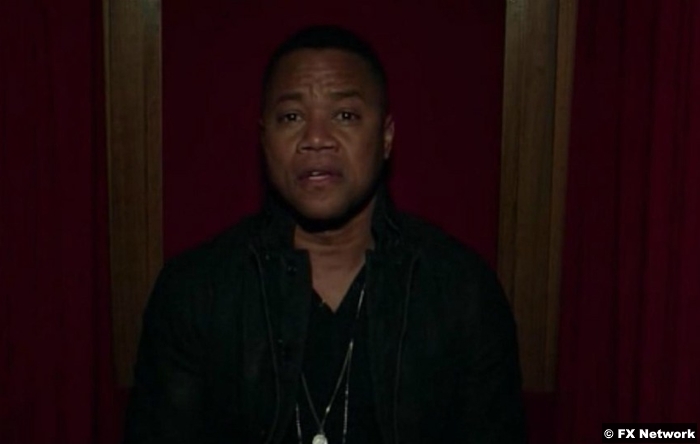 What, then, do the Millers (and Lee, whom I’ve been mistakenly calling a Miller) want? The reenactors have their contracts to blame for their return, but it boggles the mind why our original occupants would want to return to a place where they were very nearly killed. Well, Lee wants to prove that she’s neither crazy nor dangerous and ultimately, get Flora back. Shelby’s motive seems to be to reunite with Matt. But does he feel the same?

The answer to that is revealed in a scene where Scathach returns. Shelby descends to the root cellar to find Matt again having dead-eyed sex with the woods witch. Shelby thinks he doesn’t know what he’s doing, but he defies her assumptions, telling her that Scathach is the reason he came back. Then Shelby Negans him, while Dominic looks on. Later he will tell her that he couldn’t do anything, which echoes the Millers, particularly Shelby herself, earlier in the season. I’m reminded of that scene in Capote where he says that he couldn’t have done anything to save the condemned men and Ms. Nelle Harper Lee tells him, “Maybe not. But the truth is, you didn’t want to.”

That’s probably giving these characters credit for more self-reflection than they actually do, though. In reality, no one is really examining the situation in which they find themselves, preferring to view it all through a literal lens. (They’ve been given phones, but they’re disabled save for their cameras.) That can be a safer way to see the world, but not when your actual safety depends on your getting the full picture.

The occupants start to get it when Shelby is attacked. Agnes had planted a cleaver in Shelby’s shoulder, a non-fatal but still serious wound. They use Mott’s tunnels to get out and find the ghost himself. Lee shoots him with the gun that of course, she brought. He disappears briefly, but come on. He’s a ghost. Monet, Lee, and Audrey go to the production trailer for assistance that really should have come by now and find the bodies. The trailer is also void of phones or laptops, which is their most immediate concern until Agnes shows up. Lee shoots her, too, and she actually goes down, which seems to disprove the notion that she was one of the ghosts there, too. (Also disproving that notion: The scene where she removes the bullet with heated pliers and oh yeah, the scene where she actually dies.) 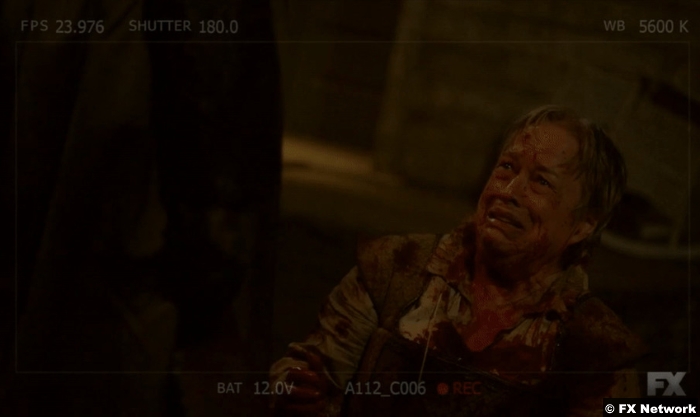 The ladies manage to dodge the colonists who are on their umpteenth torches and maybe pitchforks walk to the house, but are caught up by the real life Polks. Sadly, they were not an invention of the show, but actual cannibals with a surprisingly sophisticated (marijuana) grow op. They find Lee appetizing, apparently, and butcher part of her leg. She’s probably not dead, though, because we know from My Roanoke Nightmare that Mama can keep people alive for a while. (Inasmuch as we can believe what reality shows tell us, of course.)  In fact, Lee is my pick to be the Final Girl. We’ve barely learned anything about Monet, though, so it’ll probably be her, because that’s the kind of non-sense that AHS loves to make.

By the end of the episode, Audrey is being force-fed Lee and Monet is being forced to watch. It’s not great for them.  Shelby and Dominic are not in much better straits, as the colonists are right outside, but at least those deaths, if/when they come, are quick. They don’t involve torture, cannibalism, and smelling the Polks.

So that’s five people down this week if we count Agnes and we presume that Lee is still alive until we’re shown otherwise. That leaves five to go. Who will make it, you think?

8/10 – Another solid episode, which is unusual for AHS, whose quality again, tends to wane in the latter half of its seasons. The torture scenes might have been a bit much, had we not all got Negan-ed this week.