This week, we learned the “real” story behind the Lost Colony and we learned a lot more about Lady Gaga the woods witch, as well as the history of the house. Also, we said farewell to a few new friends, but you probably don’t care about them.

First, though, the Millers don’t get a moment of respite after watching Lee being taken away by the police, because the pig man has returned. As in, he’s in the house, chasing Shelby around. Matt tries to come to her rescue, and they manage to get piggy’s knife away, but he’s still pretty menacing. It’s Elias Cunningham, who’s apparently still alive, who comes to their rescue, burying an ax in the foul beast and banishing him with “Croatoan!” He’ll be back, though, Elias tells them.

And then he tells them a lot more. He used to own the house himself, until he couldn’t pay the property taxes and it was sold at auction to the Millers. But during his ownership, he gathered a lot of info on the history of the house and its other former residents. We’ve seen the homicidal nurses before, but thanks to Elias, like Paul Harvey, now we know the rest of the story. (One sister had her arms ripped off and the other was beheaded.) He also tells them about the Chen family, who immigrated from Taiwan and were living the American dream in the house until they disappeared. Then there’s the story of three hunters who stayed in the house until they turned their rifles on each other. And so forth.

Finally, he tells them that the colonists always kill during the same lunar cycle in October. Apparently, Native Americans call it the “dying grass moon.” What Native Americans are those, exactly? Because the ones I know call that moon the Harvest. Because that’s when we harvest souls. Wait, no–we don’t do that, but the colonists surely do, because that’s when the veil between the worlds thins out and they can pass through.

Anyway, if you’re wondering like I am why the house’s live residents can’t just leave then and come back when it’s over, Elias doesn’t answer our questions. Instead, he ends up leading the Millers to a clearing where Flora is with the poor, unfortunate souls who died on the property. The Millers try to retrieve her, but they’re held back by Elias, who ends up getting arrowed by the approaching colonists for his trouble.

When the Millers return to the house, Cricket is there. He chides them for making a liar out of him in Thomasin’s eyes, but he still thinks he can negotiate something. He leaves, ostensibly to go parley with the Butcher herself, but when he returns hours later, it’s with news that he met with a different broad. He met the woods witch! And now we know the rest of her story. Sort of. First of all, we’re experiencing a mild case of the same problem as last week, where we’re seeing a reenactment of a story told secondhand. In addition, I’m no history buff–I have a degree, so I prefer to be called “history swole”–but the accuracy of her story is a bit dubious. I know, I know–an unreliable narrator on THIS show? It’s more common than you think. Anyway, every part of her story sounds like it should be told with rising intonation. She was a stowaway? And when they found her onboard, they were going to kill her? But she killed them first because of dark reasons? Now she swears by the old gods and the new. No, that’s another show. 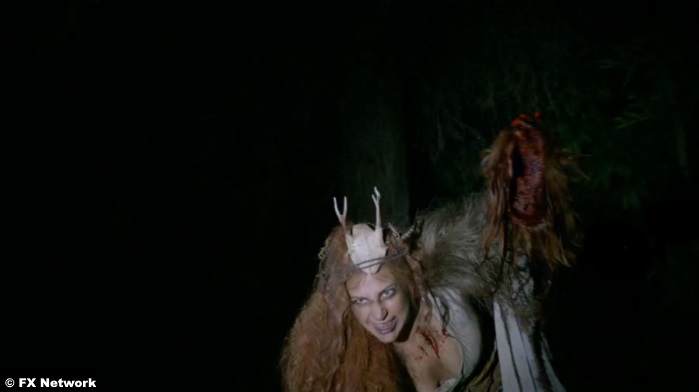 After she reached down, gripped Thomasin tight, and raised her from perdition, everything was milk and honey for the colonists, if you ignore that the colony is basically Shirley Jackson’s “The Lottery.” That’s right, they practice human sacrifice. That’s what felled Priscilla. The colonists live with this until they can’t. They try to rebel, but as usual, Thomasin thinks there’s no problem that bloodshed can’t cure. She herself is sacrificed by Scathach (Lady Gaga), whose name we know thanks to closed captioning. Now the colonists’ souls are in thrall to Thomasin and they’ve haunted the land ever since.

Cricket thinks he knows a spell to get rid of them, but how will they get Scathach to leave them alone, too? It turns out she wants some more Matt. The Millers are not thrilled about that part. Later, Cricket is Ubering back to his motel to get his supplies when Flora darts out in front of the car. Cricket, who’s apparently never heard of bait, chases after her, and the next time we see him, he’s being disemboweled in the Millers’ front yard. Before that, though, Priscilla stops the Butcher from hurting Flora, who managed to make it to her aunt and uncle at the door. But who cares, since they apparently never lock it, anyway? 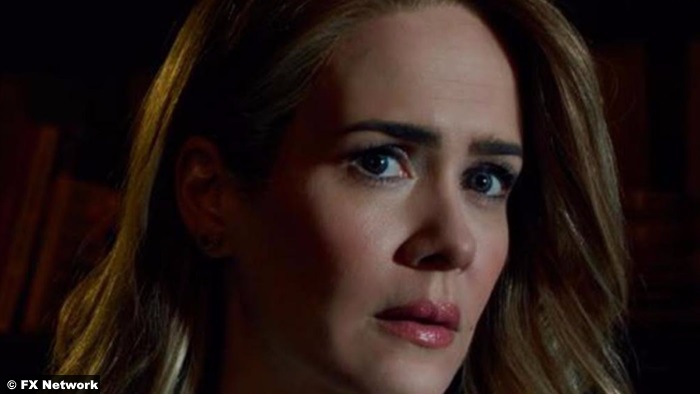 “Who cares?” sums up this episode. Like, Shelby tells us that there was nothing they could do, as the colonists rip out Cricket’s intestines. But they never do anything. They don’t leave, they don’t call for help, they don’t lock the damn door. If they don’t care enough to save other people or even themselves, why should we?

6.5/10 – This was another week of a lot of sound and fury that ultimately signified nothing. Not only do our protagonists seem too frozen to act like normal folks, but the show is also falling back on a bad habit from previous seasons. To wit, they introduce so many new characters that we can’t possibly care about all of them. Or even most of them.