It’s easy to see how some people get drawn into cults. Find someone who’s vulnerable, who’s going through a rough patch or who is still deeply wounded about something that happened to them, and they’re ripe for the picking. It works over and over again, from Weimar Germany to 1960s California to 1970s Guyana to 1980s Japan. Or Waco. Or San Diego.

Ally probably never thought of herself as someone who would be drawn into a cult. And as of this episode, she hasn’t been. But the conditions are there. 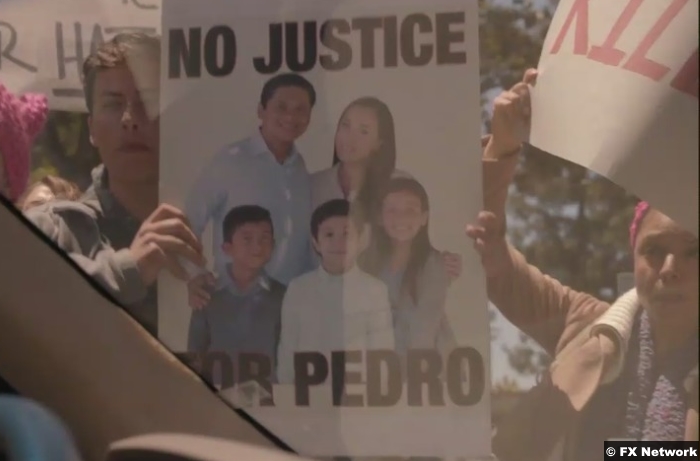 After the fatal shooting of Pedro, Ally has become a near-pariah. Protestors swarm the sidewalk outside The Butchery, where they call her a “lesbian George Zimmerman.” She wants to meet with them, to protest that she’s one of them, that she didn’t kill Pedro out of anything more than the fear she felt when she opened her door to find a figure standing in the dark. But she can’t even get to the front door of the restaurant.

That’s when Kai appears. He talks in soothing tones, almost hypnotic, as he promises her he can make it all go away. She doesn’t exactly take him up on his offer, but we can see that it’s tempting. 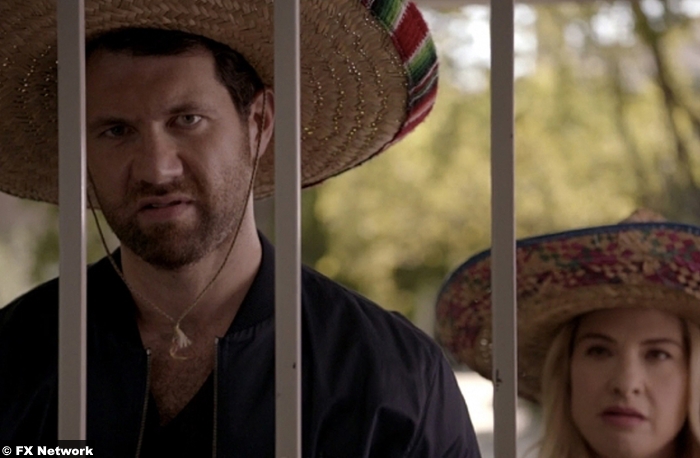 And that’s not to mention the strange trucks going down the street at night, spraying a fluorescent green gas. The city claims not to have authorized it, so who sent them and what are they spraying? 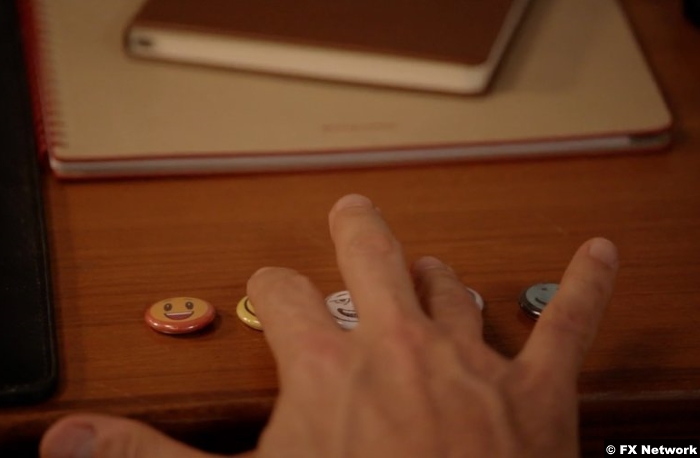 Ally could dismiss the deaths of the Changs as the murder-suicide the police say it was, but she’s seen that bloody smiley face in her neighbors’ house. The smiley face pops up again and again in this episode. One is sprayed on her door and on the side of the Wiltons’ house. A couple she doesn’t know is killed when they’re both locked into coffins and one is left at their home. Dr. Vincent plays with smiley face buttons.

Is he on it? It would seem so, especially since the female half of that murdered couple was one of his patients. Her fear was claustrophobia. It seems awfully coincidental that Vincent’s patients are now being confronted by their phobias.

And it wouldn’t be too far to consider that people are working together in ways we’ve haven’t realized yet. Detective Samuels (Colton Haynes), who’s always around when Ally and Ivy are talking to the police, is a friend of the Wiltons. And speaking of the Wiltons, both of them have met with Kai and played his little pinky swear truth-telling game.

He tells Meadow everything is someone else’s fault, which is not the greatest life philosophy, but not the worst, either. Like, why was there a delay with this review? Blame Calvin Coolidge.

I know some viewers suspect that Ally isn’t safe even inside her home, because they think Ivy’s up to something. In this episode, she’s up to leaving, because “somehow” (thanks, Winter) a video of Winter and Ally in the bath ends up on Oz’s computer. She’s in the middle of storming out with Oz when they hear a commotion from the Wiltons’ house.

Outside, they’re confronted by Harrison, who accuses Ally of doing something. She and we don’t know what, just that it involved Harrison waking up to blood everywhere and Meadow missing. The police, as is their jam, tell Harrison to calm down, which he is not interested in doing.

So here we are, Meadow is missing, and just about everyone seems to be in a clown cult. It’s not looking good for fragile Ally.

8/10 – This episode was quite entertaining, introducing “alm up” into the lexicon, and I don’t have much in the critical way to discuss, so let’s talk about theories. Does the dyed hair mean anything? Kai has blue hair, Winter has gray, and Det. Samuels, who’s not confirmed to be down with the clown, has near-white blond. Also, in his session with Kai, Harrison confesses that he wishes Meadow were dead. Is what happens at the end wish fulfillment?