When we last left our not-so-merry band, Shelby and Dominic were alone in the murder house, while the other ladies had been taken captive by the Polks, no one’s favorite cannibalistic weed growers.

Well, that adventure with the Polks didn’t last long. Lee, left alone with Jether (an unrecognizable Finn Wittrock), conned him into an intimate encounter that was, of course, a ruse. A naked mole-rat could have seen it coming from miles away, but Jether is…special. She manages to kill him, but not before recording a message for Flora in which she confessed to killing Mason, Flora’s dad. How’d she get him up on that wheel? Also, how are we seeing all of this from multiple angles? Found footage plotholes strike again! 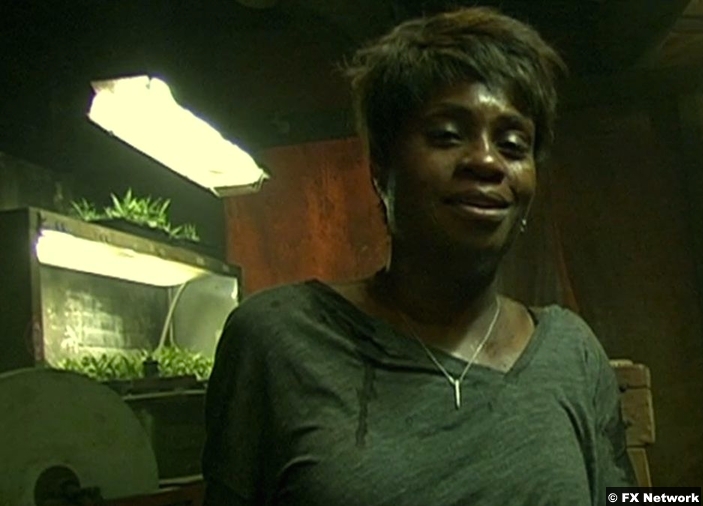 Meanwhile, Audrey and Monet are still dealing with Mama Polk. She tries to take one of Monet’s teeth, but the actress fights back and escapes. She does get one of Audrey’s, though, and after some understandable screaming, Audrey uses the distraction of Lee’s appearance to kill Mama. [Discussion time: Wouldja rather have a tooth pulled with no anesthesia or have parts of your thigh shaved off (with no anesthesia)?] 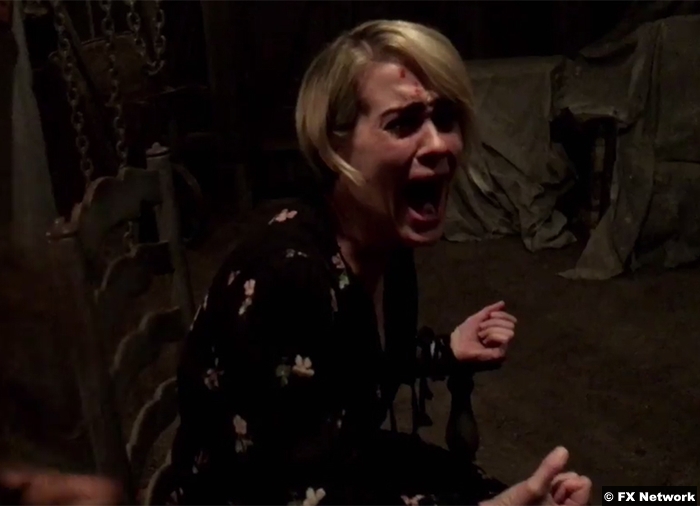 So now Monet is in the wind and Audrey and Lee return to the murder house for some reason. I say “for some reason,” but this is one of those things that is obviously done just to further the plot, since Lee later wants to return to the Polks’ and hotwire one of their cars. Why not just do that at the Polks’ house to begin with?

Because presumably, then Lee and Audrey wouldn’t return to the murder house through the tunnels, where they find Matt’s body. And then they wouldn’t confront Dominic, who tells them the truth: Shelby killed Matt after finding him in flagrante with Scathach and when the realization that she’d killed her only love hit her, she killed herself, too. Then Lee wouldn’t be there to disbelieve Dominic–he is, after all, holding the bloody knife Shelby used–and assume that he’s covering up that he killed the couple. She also wouldn’t be there to doom Dominic in return (by pushing him into the hooves of the Piggy Man). Easy peasy.

History Break!: This week in American History Story, we learn that the Polks became cannibals decades ago out of necessity–hobos ate their only food source (pigs), so they ate the hobos, as one does–and also, the first Piggy Man was a Polk.

After this, as I mentioned, Lee wants to return to the Polks’ house for a vehicle and to destroy the footage of the women offing the local yokels. Audrey doesn’t understand that last part, opining that no jury would convict them as their actions were indisputable self-defense. Obviously, though, the real footage that Lee wants obliterated is that little film of her murder confession.

It’s daytime by now and the women go to leave, only to find Mr. Piggy outside the front door. They immediately start to attack him, only for him to pull off his pig head and reveal himself to be Dylan (Wes Bentley), the reenactor who played Ambrose, the Butcher’s son. 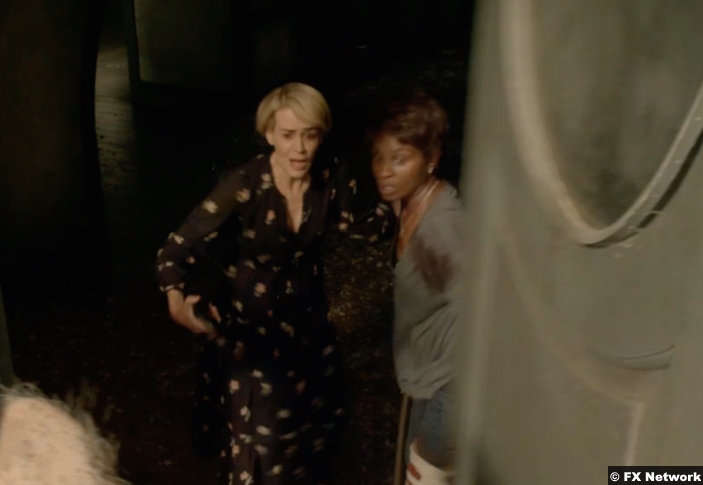 And that’s where we are as the episode ends. Shelby and Dominic are dead, leaving Lee, Audrey, and maybe Monet still alive. I don’t know if we should count Dylan or any of the other reen/actors Sidney may have set in motion for the show. We definitely shouldn’t count the Polks, as they are not part of the show, despite Jether’s disappointment and insistence that they should have been. Plus, I wouldn’t even know how to begin to count them, since like a certain Bible story (that also involved pigs), they seem to be legion. Let’s just say that there are two of them left, the two tasked with tracking down Monet.

And speaking of two left, there are now two episodes left in the season. If this episode is any indication, the next two episodes should be packed full of action.

7/10 – It wasn’t a bad episode, but there wasn’t much there there. Not much actually happened and even under duress, the characters didn’t respond believably. Rather, they acted in ways to serve a storyline. The promo for next week indicates that we’ll be getting some new blood (and more found footage–yay), so maybe it will be more entertaining.