So Roanoke it is, according to the voiceover man on FX. It’s still unclear at this point whether we’ll spend the whole season watching “My Roanoke Nightmare,” the show within the show, but that’s where we still are in episode 2.

Specifically, we’re in the woods with Shelby right after she’s encountered that poor scalped man. He’s not the only unusual activity in the woods, either. Shelby stumbles upon the woman she hit and a group of other folk in old-fashioned dress. They’re having a charming little human sacrifice party, as you do. You know, just slap a hog’s head on some dude and set him on fire. After Lee finds her and takes her to the hospital, they’re informed that the police did not find any traces of ritual sacrifice. 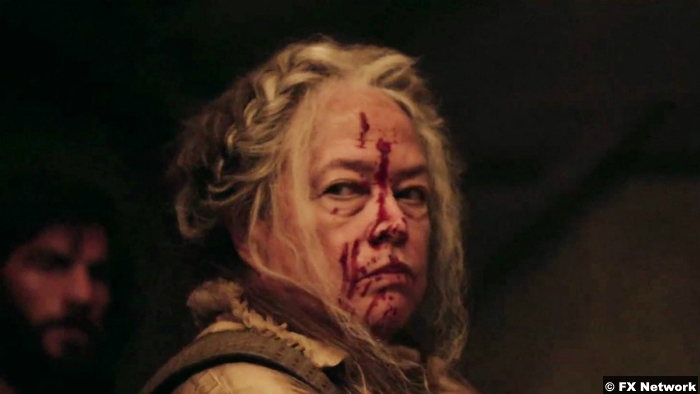 I’m not sure anyone in this town can find anything, because Matt and Shelby have lived in the house for a while now, but just now notice the door in the yard to a cellar. In it, they discover yet another video tape. It appears to be made by the same fellow in the piggy video from last week. He is Dr. Elias Cunningham (Denis O’Hare), an academic turned true crime author who’s hoping to write a classic of the genre like Helter Skelter. (Look at all the little piggies…references.) It’s unclear if he was at the house to investigate multiple incidents or just the one he details, but something in the house scared him so much he was hiding out in the cellar.

The story he details is the saga of sisters Miranda and Bridget, two 80s era nurses with a taste for homicide. They’d dabbled in death in their previous jobs, but didn’t really kick it into high gear until they established a nursing home in the house. They chose elderly victims by their first initials, so they could spell out “MURDER,” which they were painting on a wall for some reason. They didn’t make it all the way, just to “MURDE.” Something happened before they could finish their work and Dr. Cunningham thinks they were taken down by something in the house. And now they haunt the house! 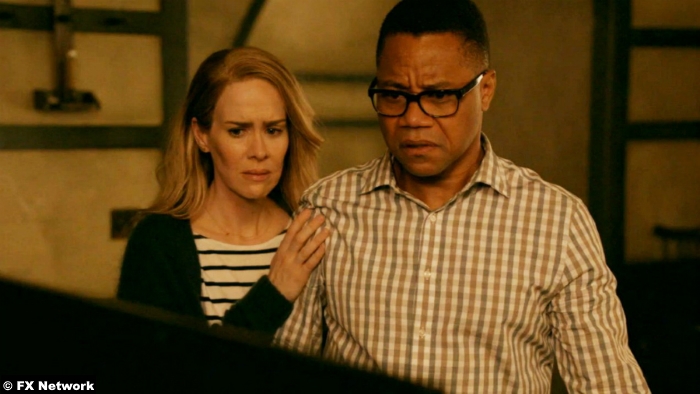 Shelby had dismissed the strange goings on as harassment from the locals they outbid, in a reversal of her feelings last week, which, of course, led to her fleeing the house. It’s hard to ignore “MURDE” painted on your wall, though. (It was hidden under the tasteful wallpaper.) However, she’s determined to stay, motivated by their literal sunken cost.

Meanwhile, Lee’s daughter Flora (Saniyya Sidney) comes to visit and immediately makes an imaginary friend named Priscilla. When Lee’s ex comes to pick up Flora, the little girl is playing hide-and-seek and negotiating for their lives. “They’re going to kill us all and save me for last,” she matter-of-factly announces. Lee’s ex freaks out, taking Flora and vowing to get sole custody as he leaves. I understand, but c’mon. Children say weird, unnerving stuff all the time. Ask my mom about my sister talking about the “woman who floats down the hall.” My point is, we know there’s probably something real and real scary about what Flora is saying, but her dad doesn’t. So his reaction seems a little over-the-top. 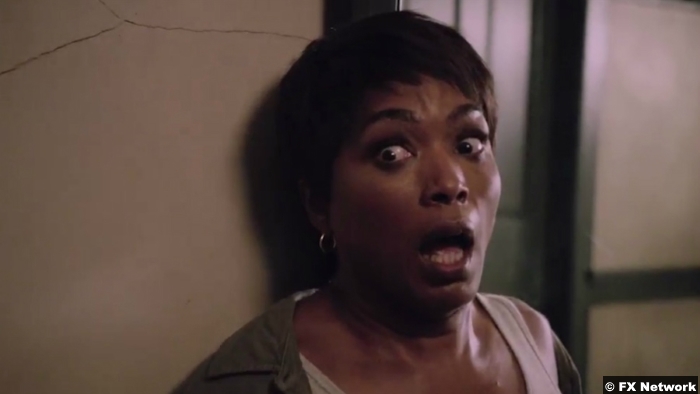 Nevertheless, in her grief, Lee dives headfirst off the wagon. The strange incidents that occur in the wake of her break from sobriety are chalked up to her alcoholic behavior, but we know better. This is purely anecdotal, of course, but I can’t say that when I’ve been drunk, I’ve seen wriggling pig tails nailed to the wall, thank God. Lee’s visions go beyond tails, though, as she also sees that pig-headed individual from the video in the hallway. She takes to her bed after that. Miranda and Bridget hover over her, but we know they don’t kill her, because she’s talking to us now on My Roanoke Nightmare.

And that’s maybe a flaw of the design of this season. We know that all three may be unreliable narrators, but we know that they survive, at least up until this point. We’re seeing them right now. The only regular character whose fate is in question is Flora. After Lee got over her porcine encounters, she got Flora. As in, she kidnapped her. Shelby manages to talk Lee’s ex, Mason, into not calling the cops. In all the hubbub, though, Flora slips outside. Or maybe she’s lured. All we know is that when the trio goes looking for her, all they find is her hoodie high up in a tree. Is she playing hide-and-seek again or is there something more sinister at work? We’ll (maybe) find out next week.

8/10 – This episode got a little slow at times–there’s only so much “And then another wild thing happened!” I can take before it all blends together. However, it still feels scarier than previous seasons. AHS has a tendency to start out solid and then careen off the rails later in the season, so the promises of something shocking to come make me wary. So far though, I’m buying what they’re selling.