This season of American Horror Story marks the first that began without a clearly defined theme a la Hotel or Asylum. There’s been plenty of chatter and rumors, which AHS took advantage of with a premiere night contest: correctly guess which promo actually has to do with the season and be entered to win. (Congratulations, Maranda W.) The sets were kept locked down tightly enough that little info about the season has escaped. Except for one thing. 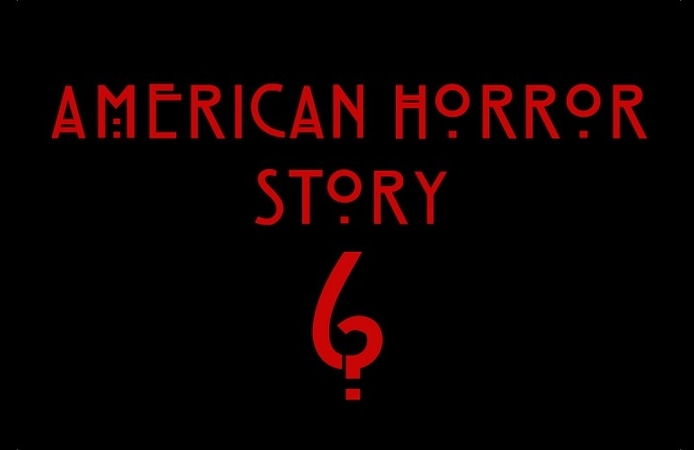 The word “Roanoke” was spotted on set and immediately the rumor mill started whirring. Could this be a reference to the Roanoke Colony and their infamous disappearance? There seemed to be supporting evidence for this theory, since Ryan Murphy had said that season 6 would tie into other seasons, and in season 1, Sarah Paulson’s psychic character had made a reference to the colony.

However, that’s not the only possibility. It’s not even the only Roanoke. There’s one in Alabama, for example. When a friend of mine was little, he mixed it up with the famous one and was afraid to go there, lest he disappear. Roanoke, AL is a couple of hours away from Verbena, where, my aunt maintains, lives an old man who eats naughty children. What I’m saying is that the South ain’t for the weak.

But it is seen as a respite for Matt (Andre Holland, who is also from Alabama) and Shelby (Lily Rabe), who moved to North Carolina after Matt was assaulted in Los Angeles, their previous home. They’re telling the story of their “Roanoke Nightmare” on one of those heavy-on-reenactments supernatural TV programs, like When Ghosts Attack, which, fun fact, featured my mom’s house in an episode. Playing Shelby and Matt in the reenactments are Sarah Paulson and Cuba Gooding, Jr, who, of course, faced off as defendant and opposing counsel in the incredible American Crime Story this summer.

Their life in NC is idyllic at first. First, they find a way-too-good-to-be-true house in the middle of the woods. It’s enormous and supposedly dates from the 18th century, but appears to be in no disrepair. And it sells for $40k at auction. Even for a rural property, that doesn’t make any sense, unless it needs a LOT of work, which it doesn’t appear to. It’s got to have a catch. 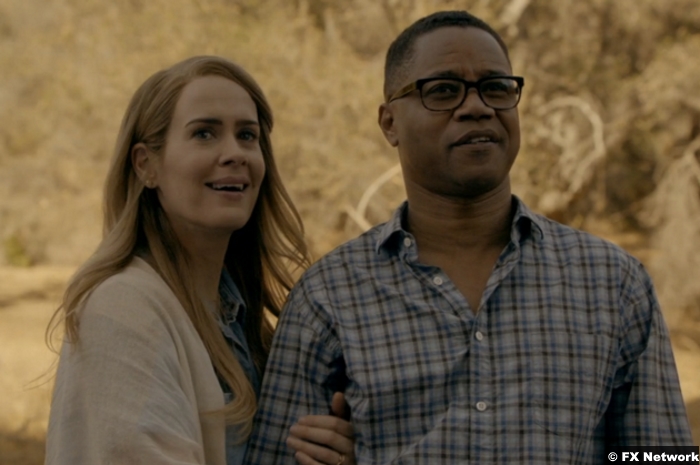 It does! One evening, as our new friends are enjoying an evening together, they hear a terrible racket outside. Something has clawed through one (metal) trash can and tosses another a good distance through the air. City folk Matt thinks it might be a raccoon or bear at first, but neither are known for their overhand throws. He suspects it might be the locals they outbid.

Then while Shelby is home alone–Matt is a traveling sales rep–it begins to hail. For some reason–city folk–she goes outside and the hailstones are actually teeth. This is unnerving enough, but then later, Shelby is attacked in the hot tub, held underwater by a group of costumed individuals she doesn’t see clearly. The police are little help and then Matt finds a dead pig outside, so he installs security cameras and his sister Lee (Adina Porter, played in reenactments by Angela Bassett), a former police officer. 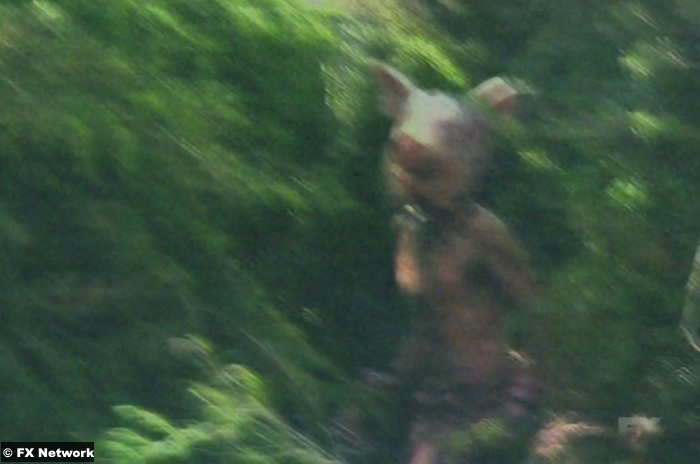 Strange incidents continue to occur, increasing the tension between the two women, who already don’t get along. They’re too busy bickering one night to notice activity outside or hear the call from Matt, who’s spotted an actual mob with torches on the security app. The ladies finally hear something in the house and follow the noises to the basement, where a TV is playing a video that feels very Blair Witch, but seems to refer to season 1’s Piggy Man story. When the women return to the main floor, stick figure dolls–shades of Blair Witch again–are hanging everywhere. [Please stay tuned for our Blair Witch coverage this weekend.] 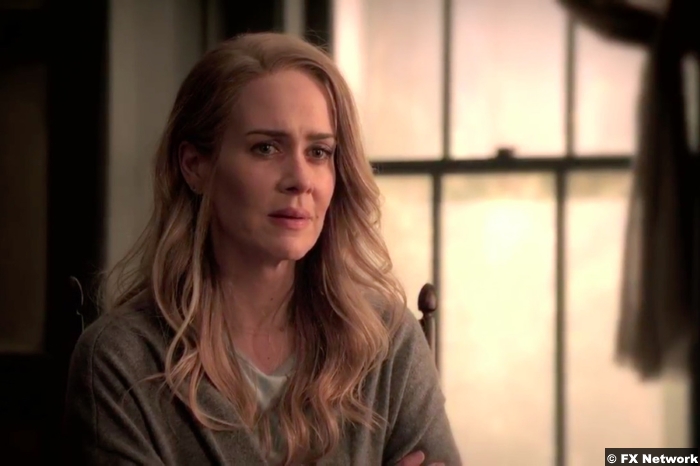 Matt arrives home after the police have been there and surveys the scene. The police have chalked it all up to vandalism and Matt is inclined to agree, believing it’s more harassment from the locals who wanted the house. In frustration and anger, Shelby flees the house. She’s answering a call from Matt when she looks up and sees a woman (Kathy Bates) standing in the road. There’s a crash of impact, but when Shelby gets out, the woman is walking away into the woods. Shelby follows her and is close behind, but loses the woman almost immediately. She does find her way to a copse where more stick figures hang, though. She stumbles and falls to the ground, where she notices that the ground is rippling and the very fabric of her perception seems to be shifting. After getting to her feet, she’s further horrified when a terrified scalped man runs into the copse. He’s dressed in a very old-fashioned manner. Have we just opened a portal to another time? Find out next week here with me.

9/10 – With a return to form–a variation on a haunted house story, a grounding in reality, and three unreliable narrators, AHS season 6 presents a story with some actual horror this time.