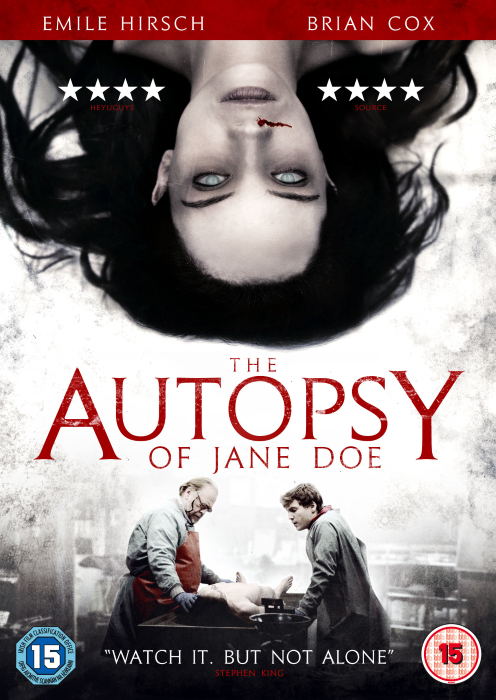 Investigating the murder of an entire family, a Sheriff and his deputies are left confused when they discover the half-buried body of an unrelated female in the basement that does not fit to the crime scene.

The Sheriff brings the corpse of the oddly alluring ‘Jane Doe’ to the coroner, Tommy Tilden, and requests an autopsy to determine the cause of death by the following morning so he can provide answers to the media.

The coroner’s assistant, who is also his son Austin Tilden, is set for a trip to the movies with Emma, his girlfriend, but decides to stay to help his father in the autopsy.

All through the stormy night, they discover strange and unsettling secrets about the victim. But how far are they willing to delve to uncover the truth?

After a fantastic previous stint in the director’s chair with the wonderful Troll Hunter, there was a lot of expectation going into André Øvredal’s next film, especially as it also marks his first foray into Hollywood.

A small-scale cast in what is, for the most part, a three-hander with one of the main characters being an oddly alluring and sexually magnetic corpse (played brilliantly by Olwen Kelly), the film relies on quality acting, a great script, wonderfully gruesome effects work and an engrossing mystery that unfolds before our very eyes, beginning with how a body with no outward signs of physical trauma can be so damaged on the inside.

Essentially starting out as a very Scandinavian-esque murder mystery, things slowly eek into the supernatural until all semblance of this being a standard matter is tossed out the window in a flurry of gore, scares and terror.

This is a movie you are best going into with as little knowledge of the specifics as possible. The acting, scripting, direction and cinematography are all on point, with Brian Cox anchoring things as the great character-actor he is and Hirsch more than holding his own.

If you like mysteries and horrors, this is right up your street.