Review: THE BELKO EXPERIMENT forgot that movies must make you feel

Not every movie is supposed to be “entertaining.” You really can’t watch, say, Schindler’s List and come away feeling “satisfied.” But even Schindler’s List had something of a happy ending. I mean, some of the Jews were saved. There’s a silver lining to be found. There’s something to make the pain worth it. Nevermind the fact that it’s a masterpiece of pacing, acting, photography and direction.

This is all very basic stuff.

The Belko Experiment is categorized, unironically, as an “Action & Adventure, Horror, Mystery & Suspense” movie. That’s a lot of genres. If I didn’t know better I’d say that sounds like a movie that didn’t know what it wanted to be. Now that I’ve seen it I realize that’s not the biggest problem. 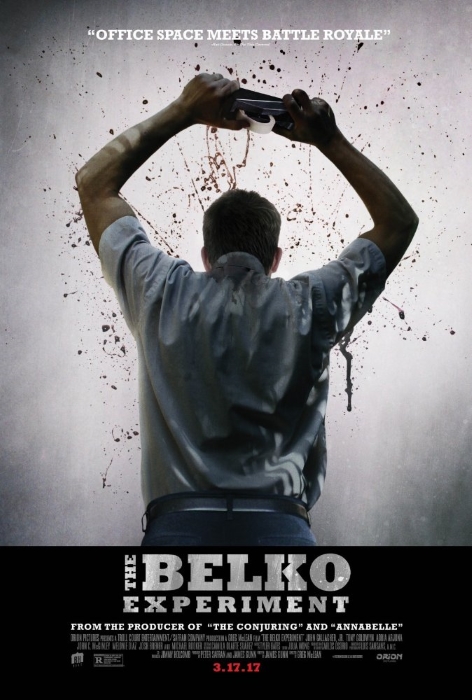 The biggest problem is the movie didn’t know how or what to make you “feel.” And if I can’t feel anything, it’s hard to pin down just what it was the movie was doing with my 90 minutes.

The plot of the movie, as outlined by a trailer that was much more intriguing that the final product, explains that the eighty employees of the suddenly-locked down Belko office building will be killed unless they kill themselves, bringing the number of their survivors down to a more manageable fifty. If they don’t comply then they will be executed (from on high by whatever power locked down the building in the first place) down to an even-smaller twenty. Thus begins a game of rationalizing, hunting and being hunted.

The trailer doesn’t give away the end-game, nor does it reveal how the screenwriter (James Gunn, who wrote and directed Guardians of the Galaxy, for crying out loud) will write such a improbable scenario out of the corner it will clearly find itself in. 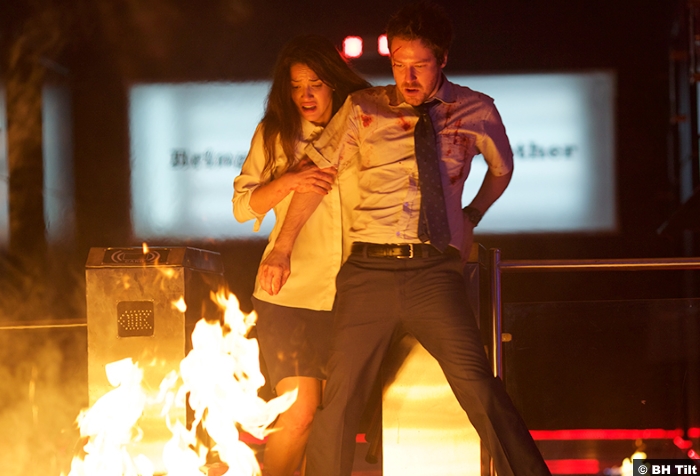 To be clear, there is no “action” in this movie, unless you’re defining “action” as simply, “people scream, get shot, die and occasionally punch or stab each other.” A good action movie needs a little more than that. It needs “set-pieces.” It needs tension. It needs a clearly defined hero and villain. I have no inherent problem with violence in a movie. I adore Reservoir Dogs, for example. But that movie had meaning. It had a story that went somewhere. This movie wasn’t action. It had no meaning. It went nowhere. It was just loud. Furthermore, there is no “adventure” to be had here. The very idea is laughable.

Is there horror? No, because you’ll never be scared. It’s more “violence porn” than horror. You might compare it to “Saw” in that regard, but Saw actually had some creativity and ingenuity to its more gruesome moments. Not to mention the two primary actors in Saw both acted their tails off despite very limited (by design) space in which to work. This movie is far too one-dimensional to compare to Saw. This felt like a movie made by a child, who snuck downstairs late one night to watch Saw against his parents’ permission, and thought “I wanna write my own one of those.” And the end result is a movie that’s not just childishly idiotic, it’s also raw, cold, nihilistic, hollow, repetitive, repetitive, repetitive and tedious. It makes Saw look like something from Hitchcock.

Is there “mystery”? Only in the blandest sense. There’s a “mysterious” voice talking throughout the rooms and hallways of the office building, via the intercom system. And you might occasionally wonder “just who is that guy?” but the movie doesn’t give you much time to think, and certainly doesn’t give you much reason to either.

Is there “suspense?” No. Once the killing starts it’s just non-stop shooting, stabbing, poking, punching, killing. It sounds sadistic to say, but I know no other way to put it: There’s no creativity to how the movie kills people. Is it too much to ask for some imagination? At least give me something visually stimulating.

The amount of times the camera cut to a close up of someone’s head being mutilated went from obscene, to ridiculous, to something that made me think they were going for parody, only it couldn’t have been, because parody is naturally clever. Cleverness never shows up in this movie.

It occurred to me, midway through the proceeding that maybe I’m just too old for this sort of thing (I’m thirty-two). But then I thought, I would have hated this movie a decade ago too.

After the first wave of killings is passed, there’s still a good forty-five minutes left, at which point Mr. Intercom returns to add a new wrinkle to the game. And then, once that’s finished, there’s another wrinkle added, like it’s being made up as it goes along. It was like a third grade story my son might write: “And then dinosaurs…from outerspace…who teleport!”

The movie is loaded with characters, many of whom are played by “hey it’s that guy” actors. A few of them are allowed to live long enough for the beginnings of an attachment to form, only to have their deaths come in meaningless and pointless ways. I suppose that’s the “message” of the movie. Something Something the real enemy is humanity’s survival instinct and natural brutality blah blah blah. Message or not, the only times the movie ever sparked a response from me was when I was annoyed that a character I was just starting to like was blown away senselessly.

In the end, fear not, the culprit behind the mayhem is revealed, and he’s a cross between the Santa Claus guy from the end of The Matrix and Hans Blofeld. He has no backstory, no great revelation to offer the viewers. His explanation for all the carnage is exactly what you assumed it was half an hour into the proceedings. He offers a couple minutes of exposition, tacked on to the end of the movie. By then you’re too dead inside to care. 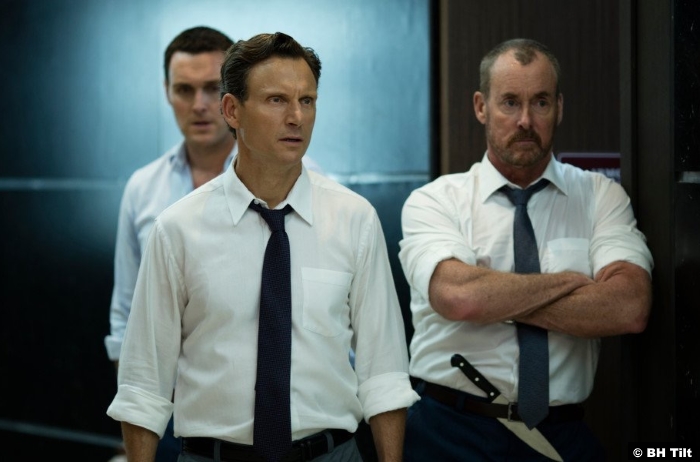 I’ve seen bad movies before, and I’ve even seen movies that were more terribly put together, but at least I could tell that they were trying (unsuccessfully) to do something with their terrible story. They had enough respect for ticket buyers to try and make them feel something…anything. The Belko Experiment has no such ambitions.

0/10 –  I’ve not seen a movie this needlessly, pointlessly, ugly in quite some time.