2016 has been and promises to continue being a great year for scary movies. Conjuring 2 released last month to glowing reviews (including right here on CoW). August 26th (my birthday!) will see the release of Don’t Breathe, with it’s very clever premise and terrifying trailer. A pair of scary films are in September: The Woods (which has potential to be as scary for this generation as The Blair Witch Project was to mine) and Before I Wake (which was released months ago in Europe and is finally getting a US release in mid-September). I skipped the first Ouija movie but the sequel, due out in October, looks to be a much better film. Bye Bye Man and Strangers 2 will finish out the year with December releases. And then there movies like 10 Cloverfield LN. (great movie) and The Purge: Election Year (pass) which had terrifying moments throughout. It’s been a good year to go to the cinemas and wet your pants.

Which brings us to Lights Out. 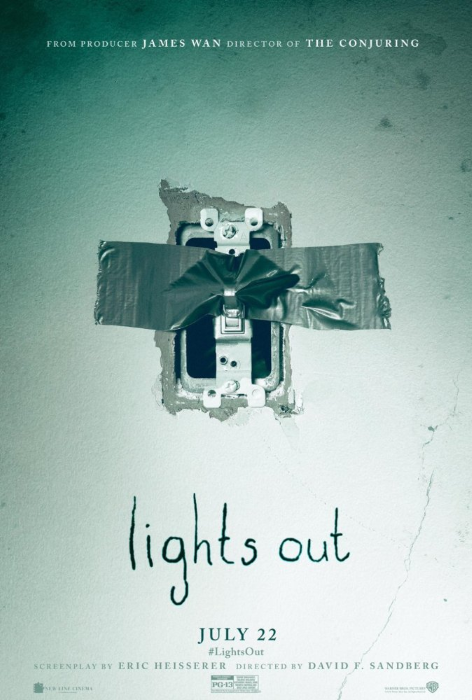 Take a dash of The Ring, add in a little of Del Toro’s Mama and give it a James Wan production, and you have the recipe for a great horror film. This one is based off a short movie from 2013 (directed by the same man who helmed the full-length version, so good for him!). The premise is simple enough: There’s a monster that is only active in darkness. That sounds like most movie monsters, but in this case it’s by design. Turn the light on and the monster disappears. But if the lights suddenly go off…it’s game on.

The short film maximizes the premise perfectly but sometimes what works in a short doesn’t translate to a full-length film (the animated movie 9 is one, the horror film Mama is another). In this case, director David Sandberg and writer Eric Heisserer did a great job expanding the concept and making it work for feature-length. Probably because it was a short-film adaptation the movie only runs an hour and twenty minutes. There’s not much down time, very little stopping for exposition and almost no moment where you feel completely at ease.

If you’ve seen the short (it’s only a couple minutes long) don’t think that you know how the movie is going to go: The villain is almost entirely different. All the short does is introduce the basic concept (a boogeyman that can’t go into the light). But even the short cheated at the end of it, when you see the baddie in all its glory in the bright bedroom. The movie doesn’t cheat; it sticks to the concept and finds every possible way to milk it for the duration of the picture, often to terrifying (and sometimes very inventive) results.

Unlike other horror movies, which have plots so thin and worthless they make the slow moments a chore and the exposition a laugher, the story here is actually very good. Because of that, on the rare times that the movie actually stops to let you catch your breath and let the characters talk out what is going on, you don’t complain. Not only because those times are rare, but also because there’s a well-developed backstory to help explain the origins of the monster. It’s a lot like The Ring in that respect, and the monster’s secrets are revealed concurrently with a steady increase in tension and horror. It all builds to a crescendo of scares in the final twenty minutes. 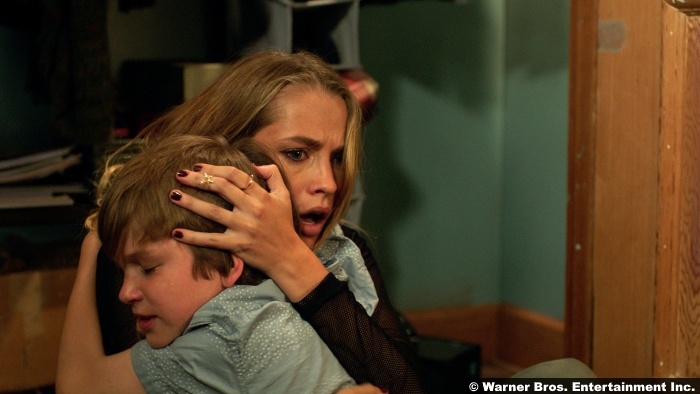 Seeing it in a full theater is a delight. You have your chatterboxes (who try to keep their own anxiety in check by cracking wise every ten seconds), the pointers (who see something in every shadow), the armchair quarterbacks (who shout helpful advice to the hapless characters in the film). They’re all there, but unless you’re Ellen Ripley this movie is going to scare you and odds are you’re going to do one of those three things a time or two during the film. But when the final act begins and all heck breaks loose it’s a nonstop barrage of shrieks coming from the theater’s speakers and shrieks coming from the guy next to you (and shrieks coming from your own mouth!). The Conjuring and Insidious movies really upped the bar for “non-stop terrors in the final act” and this movie (produced by the current master of the genre, James Wan) continues the trend.

Is the movie perfect? No. As with any horror movie there are the usual minor quibbles:

Characters continually make dumb decisions solely so that they can remain in danger for our twisted satisfaction. When you have a monster that is only susceptible to light (and who demonstrates the ability to kill the power in your house) your most logical solution should be “battery-powered flashlights.” I don’t mean little rinky-dinky AA-powered flashlights you can pick up in the check-out line at Wal-Mart. I mean some big mamajama halogen lights from the Home Depot. You place those strategically around the house and keep one on you at all times (with a smaller backup nearby). That’s it. You may not necessarily kill the monster, but you at least reach a stalemate. Instead, for most of the movie not one flashlight is ever used. When the time finally comes…it’s a windup emergency flashlight. To be fair, there’s great tension in watching a character frantically wind up the charger to get the light back on, knowing the monster is closing in, but in terms of logic…there is no logic: get some halogens fool! 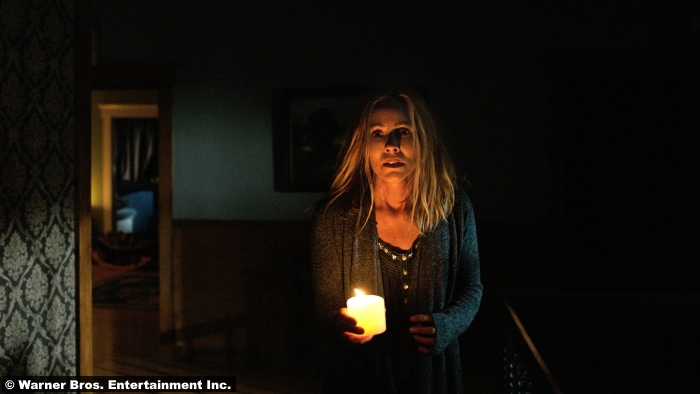 Another annoyance was the fact that, in between moments of terror, everyone seems to be perfectly fine. There’s no lingering sense of panic on their faces, in their voices, etc. I don’t just mean quiet moments in the daylight. There are parts when the terror pauses in the middle of a dark room at night, and characters decide to go to sleep or flirt with each other, or leave to investigate a noise (like they DON’T know what’s causing it!) and act like it’s all okay because they put out a few candles. It was laughably naive.

Also, apparently there’s an unwritten rule in ghost movies that no one has ever seen a ghost movie, because half the movie features characters being attacked by this thing (sometimes with physical wounds to show for it) and then saying things like “I don’t know what happened to me…I don’t know what it was.” Are you serious? It was a freaking ghost that bit you girl, be real! Again, those are minor quibbles and don’t really bring down the movie all.

There are specific points of praise that need to be mentioned:

Without spoiling anything, the way the heroes learned to hurt the monster was a clever idea, and it led to one of the best jump scares I’ve had in a movie in years. Speaking of, there are plenty of Jump Scares (where the baddie goes BOO!) and plenty of Window Scares (a phrase I coined last year, where the baddie is hiding motionless in plain sight, unnoticed by anyone until it suddenly, slowly, starts moving toward the hero) mixed throughout, so the spectacle of being scared to death never grows tedious or repetitive.

The beginning of the movie was a little short film in and of itself and it had a payoff that not only tied in to the rest of the plot, but also did something few horror movies do: It revealed the extent of the monster’s powers. Within the first ten minutes you basically learn everything about how the monster interacts with the regular world. You learn about it’s inability to go into light, its ability to control power (to shut off lights) and, most importantly, you learn that it’s not just a boogeyman who goes “BOO!” but actually can do real physical damage. This shows the audience that this monster is not limited to one haunted house, isn’t just a paper tiger and is definitely capable of doing terrible things to your mind and body. In this movie, when you see a hand reaching out for someone’s shoulder in the dark, you know that if it grabs them there will be blood.

The short film basically used one gimmick: Turning the lights on (no monster) and then off (monster!), back and forth, over and over until BOO! it’s right on top of you. This is how the beginning of the movie goes too, but as the film progresses Sandberg shows off many different ways to play around with the gimmick. The most creative involved the flash of a firing gun. It created a strobe-like effect as the poor dumb victim kept firing rounds into a phantom, that flickered in and out of sight, steadily approaching. There’s another one that uses the flickering of a neon sign. Whether or not there will be a sequel is up in the air (the movie seemingly has a very concrete ending, but eagle-eyed watchers may notice a shadow creeping around during the final shot), but if there is you can be sure that this creative team will have many more ways to creatively milk a seemingly one-note gimmick.

This is a perfectly paced film, with good acting, a great screenplay, clever direction (from a first-time feature filmer) and more scares than you can imagine packed into a breezy runtime.

A must see in theaters.