Review: THE MUMMY doesn’t just fail to launch a series; it just fails

There’s nothing Hollywood loves more than copying itself.  If something works, expect ten more attempts to mimic it by the next summer. Everything from genres to character-types, anything that catches lighting in a bottle will find a dozen Hollywood executives running like mad with open bottles in their hands, trying desperately to catch some of their own. Even trailers themselves are shamelessly copied. Chris Nolan’s Inception trailer was so impactful with it’s teeth-rattling, heavy reverb “braaawwwwmmmm!” that drives the two minute preview, it was copied endlessly in every action movie that followed. Now, after Guardians of the Galaxy broke the trend with its first trailer, suddenly everyone’s in love with slapping a retro song on their teasers, even when doing so makes no sense at all.

So when Marvel risked basically everything it had in the tank to start its own inter-connected series of movies (called a “shared universe”), they were laughed at, warned, and presumed dead. And when Marvel’s gamble paid off in a big way (the MCU is the biggest movie “franchise” in cinema history) suddenly everyone and their brother wanted to get in on the act. But unlike Marvel, who put in the work, building their universe of movies patiently with Iron Man, The Incredible Hulk, Thor and Captain America, others are too quick on the release. The recent King Arthur reboot was supposed to be the first in a six-film franchise, but it bombed and will likely never release a second film. The same goes for Universal. Even before this weekend’s debut of The Mummy, the studio released Dracula Untold in 2014, a turd of a movie that did nothing for Universal, their ambitious plans for a “monster movie universe” or the Dracula character itself. After the movie bombed they decided to pretend the whole thing never happened (a wise choice) and announced that The Mummy will now be the start of their new “Dark Universe” that brings together all the monster movies the studio has been making movies about for almost a century. 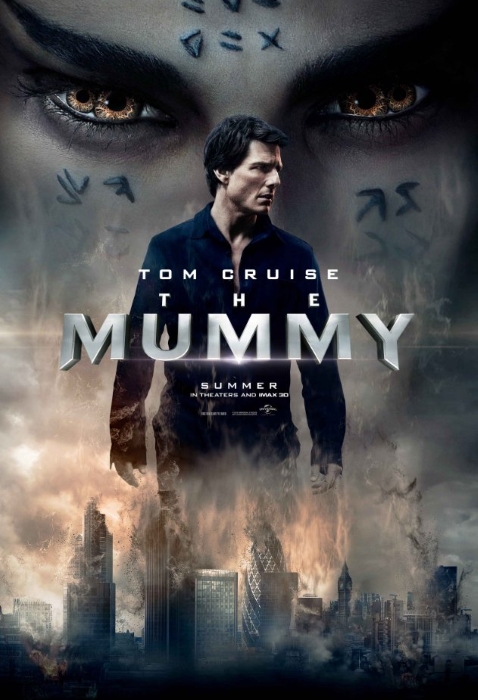 The problem Universal is having, which also plagued King Arthur, and to a lesser extent the recent Power Rangers and DC Superhero films, is that there was too much focus on laying the groundwork for the future, and for telling everyone all the big plans they had for the second, third, fifth, tenth movies still to come, that they forgot to make the debut feature good.

Remember the first Iron Man movie? Even after fifteen films in the MCU, the first still ranks among the very best. Start with a great movie and then make another one that just happens to be set in the same universe. Then do it again. And then, after you’ve put in the work, then you can bring them together for a party. When studios forget to make “movie one” any good, and/or they they try to shoe-horn in too many references to movies yet to come, the whole enterprise collapses.

The Mummy‘s biggest problem is that it’s simply not a very good film. Incidentally, that’s also Universal’s biggest problem, because they’re betting heavily on it being a hit and for people to get excited to see another movie in the “Dark Universe.” It’s projected, however, to come in a distant second this weekend, behind Wonder Woman, and the poor reviews it’s garnered plus more movie competition for the rest of June (Cars, Transformers) make it likely to end up a King Arthur sized bust.

So what went wrong? If the movie had been well-made it might expect to have better box office legs, instead it’s dead on arrival, and as a result, Universal’s ambitious plans are now in jeopardy. Why? The first movie wasn’t any good.

1. IT HAS A WILDLY INCONSISTENT TONE 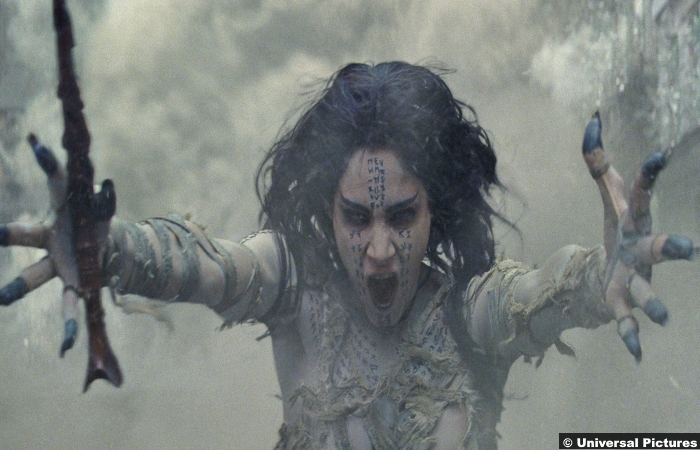 The biggest problem that plagues everything else about the film is the woeful job that director Alex Kurtzman did helming the feature. As director it’s his job to realize a particular vision for the movie, but instead he’s tossed to and fro on the wild waves of a “screenplay hackjob.” Half a dozen writers (including Kurtzman himself) lended a hand in writing this movie and it shows: There is not one clear narrative direction to any of it. It feels like a bunch of ideas taken from very different stories, stitched together like Frankenstein’s Monster. Take the humor in the film for an example; there’s no rhyme or reason to it and its presence in almost every scene is out of place relative to what’s going on in the foreground. There are times when light-hearted, quippy, try-hard humor lines are spoken over supposedly-intense chase scenes while foreboding music plays. It creates a disconnect with the audience where you’re not sure if you should laugh or grip the edge of your seat. Instead you just sit there, emotionless.

2. THERE ARE THESE LITTLE RANDOM ACTS OF STUPIDITY

Nick is bitten by a spider early in the movie, and moments later is walking around looking all putrid, with green veins all over his face, and one eye gone completely white. And nobody. Literally no one. Says anything about it. People look right and him and converse with him, and no one says a word about why his face looks like Joffrey during the Purple Wedding. It’s not till he’s lingering over the sarcophagus trying to cut a rope keeping it shut does anyone bother questioning him.

Speaking of, they find the sarcophagus at the bottom of an elaborate pit, having been lowered there by a simple pulley system. Our female expert on these sorts of things gives a line-reading right out of a soap opera by saying “they’re not keeping something out…they’re keeping SOMETHING IN!” But that raises the question, if the ancient Egyptians wanted this mummy down in the pit forever, why did they use a pulley system? Why use a simple machine that can easily bring the box right back up?

There’s also a tired and cliched “the bad guy is captured but that’s exactly the bad guy wanted!” trope that The Dark Knight did well, and then Spectre 007 did poorly and so did Avengers and Star Trek Into Darkness (also by Kurtzman). I thought we’d moved past that, but apparently enough screenwriters still think it’s an effective plot-turning moment. It isn’t. 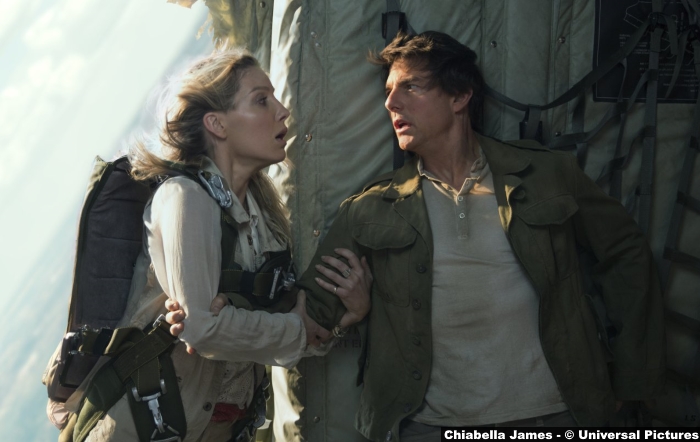 Tom Cruise runs a lot, because it’s a Tom Cruise movie so of course there’s multiple scenes of him running. There’s a classic-“Tom Cruise does a crazy stunt that costs a lot of money and is very dangerous and is really the only cool part of the movie so here, we’ll put it in every trailer and commercial until release” spot, where he flies around in zero-G while a plane is in freefall. It’s the only cool spot in the movie, but of course I’d already seen it in the trailers. There are zombies (in a Mummy movie), close-combat fight scenes, action scenes in a car, action scenes in water, action scenes in the city, action scenes in an abandoned church. But there’s no joy in any of it. There’s no good story to give those scenes any connective tissue that makes them all worth watching. It’s empty. It’s pointless. And after a while it’s just noise.

4. BRENDAN FRASER’S 1999 VERSION HAS RETROACTIVELY BECOME A GREAT MOVIE THANKS TO THIS

The 1999 Mummy movie was never considered a brilliant picture. It was dumb popcorn fun, but nothing more. Watching this movie, with its misplaced humor and drab, washed-out look, made me appreciate the Brendan Fraser-led cheesefest. That movie had spunk. It didn’t take itself so seriously. It was Indiana Jones-lite, which is not a bad goal to shoot for. This movie took itself way too seriously to try and emulate Indiana Jones or the 1999 Mummy. And anytime a bad movie also takes itself too seriously the movie is going to be mocked that much worse. The 1999 film was silly but it winked at its own silliness so you never felt right mocking it; you were always laughing with it, which makes it a nice movie to go back to on occasion. I would never go back to this movie, not unless these guys were there too.

5. THE EMPEROR HAS NO CLOTHES 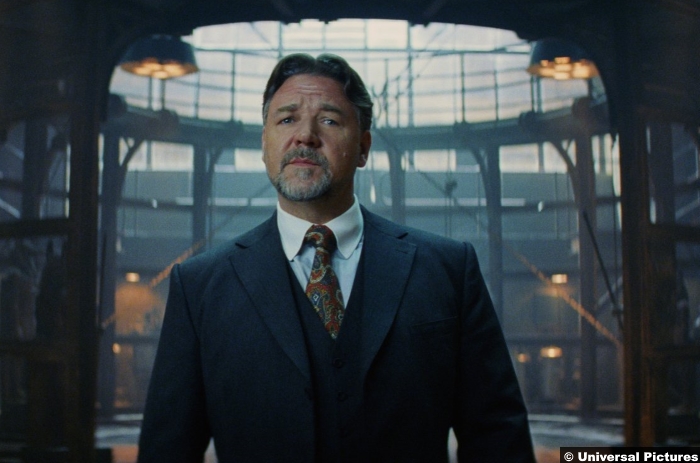 The movie opens with a big spinning globe, just like Universal Pictures movies always do, except this one is darkened and ominous, and then the words “DARK UNIVERSE” appear, letting you know you’re watching a film from their new “shared universe” of films. It’s awfully presumptuous; one movie does not a universe make. And yet, if the movie had turned out to be good, no one would have cared. At the end, however, after the movie spent two hours sucking, Russell Crowe (who plays Dr. Jekyll, because “SHARED UNIVERSE!”) goes on a speechifying tear about how we’re entering a whole new world of monsters blah blah blah. It just came off as self-aggrandizing and way too in love with itself, which is only made worse due to the fact that the film simply isn’t good enough to warrant any such pomp.

2/10 – Just because you have a plan for a big interconnected series doesn’t mean I have to care. The movies themselves have to be good. This wasn’t.

6: THERE WAS A GUY NAMED NICK IN THE MOVIE AND JAKE JOHNSON WAS ALSO IN THE FILM, BUT JAKE JOHNSON DIDN’T PLAY NICK.

Nick Miller is my spirit animal.