There were several moments during Don’t Breathe when I peeled my senses away from what was happening just long enough to think to myself how nearly flawless the experience was. This has been a very disappointing summer for Hollywood. There have been a few standouts, but the vast majority of releases have disappointed tremendously. If there is one genre, however, that has stepped up and carried the film industry on its back this year it’s been horror movies.

I think I’ve seen more scary movies this year than the past decade combined, and almost all of them have been great. From the quasi-sci-fi (10 Cloverfield Ln.) to the grounded in reality (The Shallows); from the supernatural (Lights Out) to the surreal (The Conjuring 2), scary movie after scary movie has released throughout 2016 and each of them brought something great to the table. Now along comes a movie like Don’t Breathe, which succeeds at being greater than all of them thanks to a tight screenplay, a perfectly-realized premise and enough twists and surprises (both big and small) to ensure one of the most fun movie experiences you’ll have this year.

Let’s breakdown everything that makes this movie so great. 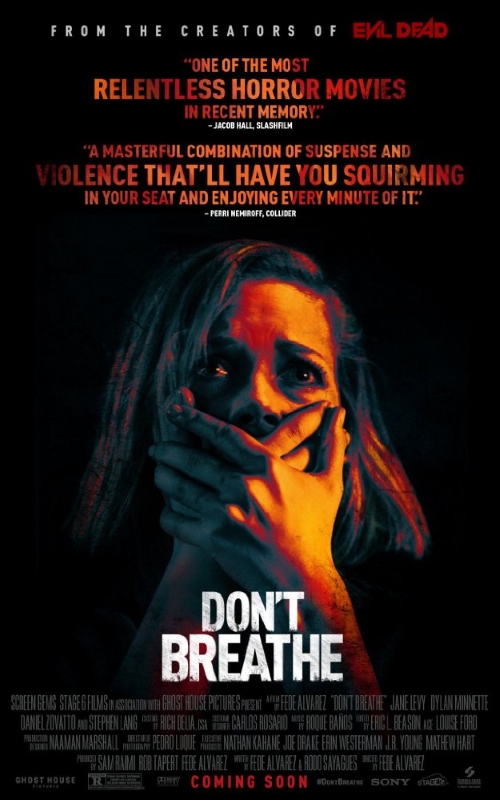 Most 90 minute movies have about 80-90 pages of screenplay. I’d bet this one was only about 50 pages, and most of the dialogue was front-loaded in the opening act. The greatest sin a horror movie can make (apart from not being “scary”) is being “boring.” Films that rely too much on set-up, exposition and world building often lead to an antsy audience that’s ready to get to the scares already. Some movies spend so much time talking and so little time scaring they don’t deserve to be called a horror movie (The Purge: Election Day comes to mind). Don’t Breathe however sets all its pieces in place with only three or four scenes.

We meet our trio in one scene, learning that they are burglars working in Detroit’s crime-ridden, cop-deprived inner city. They are aided by one of them being the son of a home security technician. He supplies the codes used to break in, always allowing for the burglary’s to take place when the home-owners are away, thus there’s never a need for guns or violence.

In another scene we learn that they are trying to score enough money to get out of the hell hole of their city to move to sunny California. They find what they think is the perfect score in the house of a lonely old Gulf War (1990) vet who happens to be blind (it’s implied his blindness was the result of chemical warfare in Iraq).

Another scene shows us the home life of the female lead: she has a daughter she wants to better provide for, she has a mother who is a deadbeat and a mother’s boyfriend (who lives with them) with a nazi swastika tattooed on his hand. It lays it on thick, but it serves to bring sympathy onto her as a counter-balance to the fact that she’s agreed to rob a blind war veteran. Even the son of the home security tech is written with care, as he initially refuses to help rob a blind guy and only agrees to do so because he’s sweet on the female burglar and on the obligatory promise that this is “the last one then I’m out.” It’s not much but you can sympathize somewhat (and really the female lead is the star of the show). 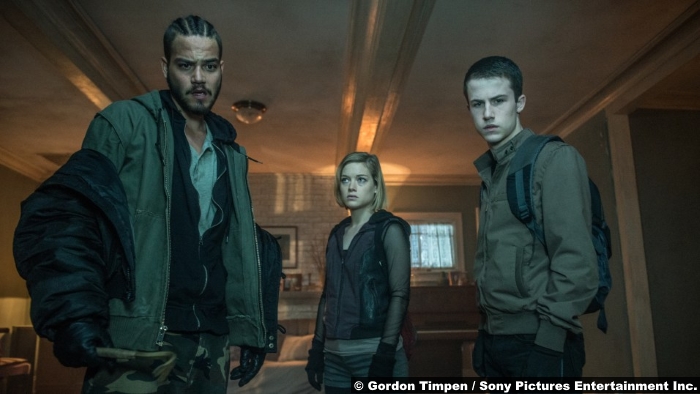 The only one of the three who doesn’t get any kind of a softening or a moral motivation is the “wannabe gangsta” who goes by the name “Money.” If you’ve ever watched a horror movie before you could probably guess that he was destined to be the first casualty.

And then there’s the blind guy himself. He’s the “victim” in the plan of the trio, but serves as the “horror movie antagonist” in the film. The kids trying to escape his house while he hunts them are, by all respects, the bad guys here, but you can’t help but root for them to escape. The opening third of the movie, plus a few interesting twists later on, do a great job of making the victim of the picture into the villain and the villains of the picture (at least the two prominent ones) into victims.

It’s not just great writing in the first half-hour that works so well. It’s also how the rest of the movie is laid out. There’s so little talking once the home-invasion begins I’d bet a lot of it was just story-boarded with nothing ever written beyond a few notes about what happens in each set piece. Writer/director Fede Alvarez flawlessly built the world and its four major players and then just turned them loose for the final hour. 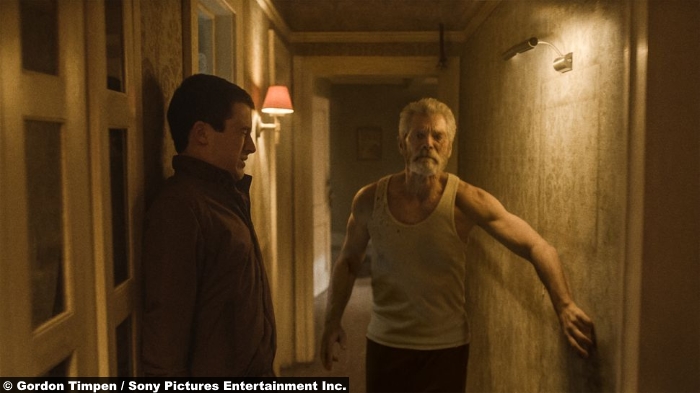 This is a small, low-budget movie, not tied to any existing franchise or marketed around any major A-list actor. It needed word of mouth to succeed and thanks to a great first trailer it got it: That trailer did a great job establishing the premise of the movie (blind guy fights off burglars by boarding them in his house, shutting off the lights, and hunting them) without revealing the biggest twists that are in store for viewers. The premise alone was intriguing enough that it didn’t need to give away anything major. Those unexpected surprises allowed for one of the best jump-scares in the whole movie, as well as gave the plot a second wind just as it might have started to become redundant.

Instead, right around the time most horror movies would have paused to let the audience catch their breath, this movie says “nope: Check this out!” and forces you to keep your adrenaline running. And through all the revelations and surprises the blind man just keeps coming. He’s easily the most relentless antagonist I’ve ever seen in a horror film. He doesn’t stop to quip like Freddie Kruger. He doesn’t slink around in the shadows for long stretches like a Xenomorph. He’s just a guy who gets home-invaded. There’s a lot more to it than that, but that’s the basic premise minus a few surprising twists and turns: He’s a guy who gets home-invaded so naturally he’s not going to stop until everything is back to “normal.” And he doesn’t stop, so the constant tension and terror doesn’t stop either.

And because the movie is grounded in reality, the small premise is very focused. It doesn’t get bogged down with mythology or exposition needed to explain the monster’s powers, etc. In fact, the fact that it’s so grounded ought to work against the terrors of the movie. As backwards as it sounds, it’s the ghost stories that tend to keep people up at night. The more “realisitic” horror movies usually have a harder time disturbing people after the credits roll.

Don’t Breathe works however, despite how simple the premise is. This isn’t a ghost story where, when it’s over, you’ll lie in bed scared (irrationally) at every creak you hear in your house. This isn’t a movie where the villain is some supernatural threat where you think “why is this demon so bent on terrorizing this family, no matter where they go?” In this case the “terror” was just a guy in his house. The people came to him, looking for trouble. There’s nothing about the premise that should make anyone stay up at night scared of every shadow in their home, but the movie worked anyway because it was so perfectly executed. 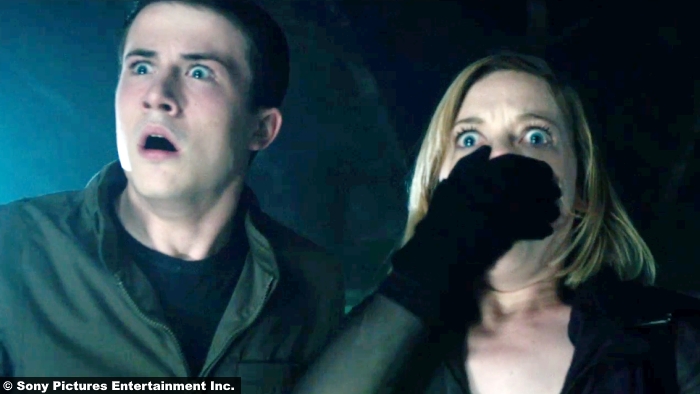 Without spoiling any of the big surprises, plot revelations and twists the story takes, I will say it’s a credit to film that it maintained it’s grounded reality while also delivering some wicked plot turns. It’s easy when your villain is a ghost to have them disappear and reappear or transform into some ghoul or possess a loved one, etc. When you’re working with real people, you have to work twice as hard to give the audience the big shocks they want in a way that makes sense. This film does.

There are some great “Chekhov’s gun” moments, where little things you think the movie has forgotten about come back with a vengeance (usually everytime you think the robbers have escaped the house), and other clues and hints that are revealed later in the picture are first teased near the beginning. This movie was like watching those dominoes videos on YouTube. There’s the anticipation as the pieces are set up, plus the appreciation for the hard work and dedication it took to lay everything out just right. And then, when the first piece falls and the whole picture starts to form, you can’t help but be amazed even though it was all laid out for you ahead of time.

The shocks, the twists and the wonderful jump-scares that litter the film are all so well done, you’d be doing yourself a disservice to watch this movie alone at home on a Thursday night; this movie demands a packed theatrical experience. I watched it at a midnight showing with a theater full of people having the time of their lives. There’s no better kind of movie to see in a crowded theater than a well-made scary movie. If you let yourself enjoy it and not get too upset at all the chitter-chatter and everyone shouting advice (even I screamed “Don’t turn around, just run!” a time or two), it’s really great. 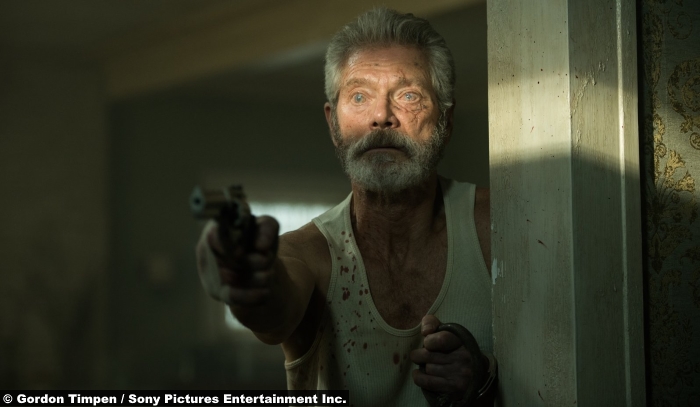 The movie works in part because it zigged (with a down-to-earth premise) where lately most other horror movies have zagged (with supernatural threats). It also worked because the screenplay did its job in establishing the world and your feelings for the characters, and the basic premise behind the plot was perfectly realized with enough surprises to keep you guessing till the very end.

See it at the cinema.