As we celebrate 50+ years of Star Trek and look ahead to the September release of Star Trek Discovery, CultOfWhatever recently completed a look back at the Final Frontier’s many TV iterations, as well as considered the newest entries in the film franchise. We talked about the Original Series and how, when it was great, it embraced the sixties social revolution. On the other hand, when TOS stumbled, it slipped into every silly cliche that doomed all the sci-fi shows from that era.

And though Generations disappointed, First Contact was everything Paramound needed it to be for the film franchise to continue. Insurrection then took all the good will that First Contact had given the franchise and wasted it on a middling movie that was only “okay” for fans, and largely ignored by general audiences. Nemesis was even worse, in terms of story, direction, critical acclaim and box office intake.

The hiatus between Nemesis and the 2009 reboot was self-imposed by Paramount, who wanted to ensure that the franchise’s palate was sufficiently cleansed before starting fresh. A previous hiatus had occurred in the 1970’s, as efforts were started and stopped repeatedly to revive the franchise. All that series creator Gene Roddenberry had to show for his trouble, however, was the Animated Series. Though fans enjoyed it (and it is remembered fondly by Trekkies today), the fact remains The Animated Series was a cheaply produced, Saturday morning affair that did little to bring the franchise back into the mainstream. Its two seasons concluded the five-year mission of the USS Enterprise that began in the original series, but it was hardly the big “next step” that Roddenberry wanted to take the series. Gene’s real ambition was to bring Trek to the big screen. Paramount was reluctant to green-light a motion picture, however, as they thought the franchise’s appeal was too limited to work on such a big stage. It would take the release of Star Wars in 1977 to convince them to give their sci-fi property a try. 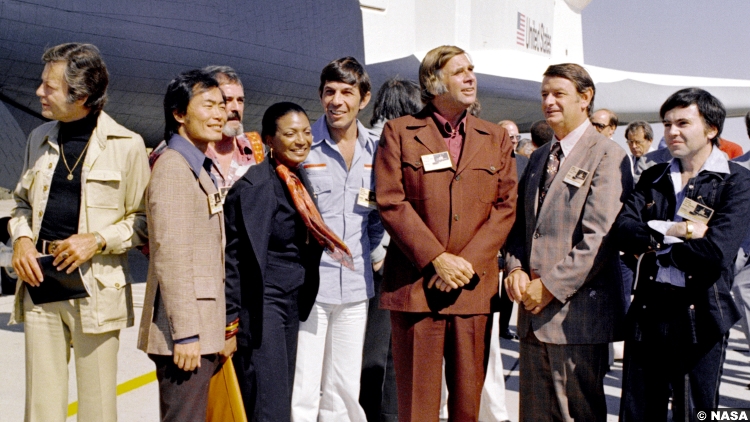 In the meantime, Paramount was toying with the idea of launching their own North American television network (to compete with the then-trifecta of NBC, ABC, and CBS). The new network, to be called The Paramount Television Service (PTS), was slated to launch in April of 1978. Needing a flagship show that could attract loyal fans during the networks fledgling years, Paramount offered Roddenberry the chance to revive Star Trek in a proper way. If all this sounds familiar, it should; it was exactly the formula used during the launch of UPN (the United Paramount Network) in 1995, with Star Trek: Voyager being the premiere show of the network.

The only difference is Voyager actually made it to air.

It’s hard to imagine the days when Star Trek was a little-respected niche show, no more thought of or regarded as Bewitched, or Lost in Space. Was it popular? Network ratings in the 1960’s were very imprecisely measured and it’s clear that Star Trek was at least more beloved than NBC initially believed. When they announced the show was cancelled after two years, a massive letter-writing campaign from fans across the country convinced them to bring it back for a third season on Friday nights. A conspiracy theorist might say that NBC executives were trying to prove themselves right by putting Trek in such an unappealing timeslot. They also slashed the budget which hindered the kinds of stories the sci-fi show could tell. After a year of poor ratings (though, again, those ratings were measured using the same metrics applied the previous year, when NBC was proven wrong as to how popular the show was), the network cancelled the show and seemingly wrote it off forever.

Syndication saved it, however, after “reruns” became the latest innovation to television. Star Trek’s replays were some of the most consistently-watched programs on the air in their timeslots, even beating out many brand new shows in the ratings. This led to Paramount investing in the animated series and then pushing Roddenberry to bringing the show back in a proper way for the PTS.

Along the way, Roddenberry had been hired and fired by Paramount’s motion picture division after failing to turn in a movie screenplay that could produce a low-budget film. Feeling that this was his last chance to revive the series, Roddenberry finally abandoned his vision for a Star Trek motion picture (after taking a two week vacation in order to, as he put it, “purge all the bitterness and negative feelings” that resulted in having his movie dreams dashed) and set about putting his film ideas into a TV box. The idea was to launch the new show (tentatively titled Star Trek II) in February of 1978 as a two hour TV movie, and then launch the show (and the network) formally in April. The budget for the TV movie was significantly lower than a sci-fi movie’s budget, but at 3.5 million (exactly one-tenth of the budget for the first Trek movie a few years later) it was slated to be the most expensive TV special ever produced.

Roddenberry wanted his new show to do things his old one could not. He wanted to spend time on 23rd century earth. He wanted to go deeper into social issues and topical themes that NBC always pushed back on. He wanted a greater emphasis on women in the interstellar workplace; NBC only allowed three recurring cast members to be female in the original series, and eventually forced the removal of Grace Lee Whitney’s Janice Rand character. Not to mention NBC previously shot down the original TOS pilot that featured a female first officer. For the new show, Roddenberry was determined to show that the future was a land of equality.

In terms of cast, the two biggest question marks belonged to the two most important cast members. Leonard Nimoy was not on good terms with Gene Roddenberry in those days, after Gene refused to support his lawsuit against Paramount (Nimoy was suing because he wasn’t being compensated for various uses of his likeness). Nimoy was also trying to make a film career happen, and repeatedly stated he would not return to television. William Shatner was the other holdout. Initially Paramount offered him a nice sum of money for the TV movie and thirteen episode first season, but refused to offer him a long-term deal. As it turned out, Paramount was prepared to kill Cpt. Kirk off after the first season if keeping Shatner on board became too financially burdensome. Eventually both sides worked out a deal, but no such agreement was made with Nimoy; he was replaced by David Gautreaux (who was set to play a vulcan named Xon). 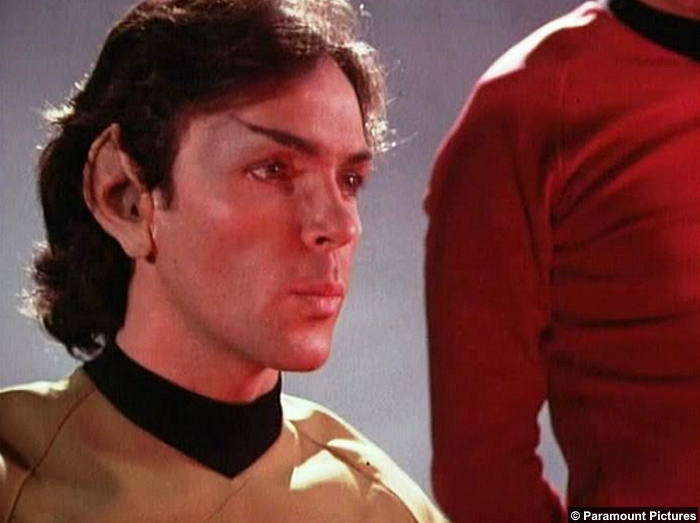 Other than replacing Nimoy, the really big casting story went to Persis Khambatta, who was set to play a character that Trek fans would later become familiar with, Lt. Ilia. As per Roddenberry’s directive, Khambatta wore a bald cap for her auditions. For some reason, Roddenberry was hung up on the idea that the show should have a bald female character; he talked about it frequently in the preceding years. The network executives (including Michael Eisner) hated the idea but, to their credit (or was it?) they deferred to Roddenberry, which is something NBC never would have done a decade prior. Once the cast was secured and the production designs finalized, all that remained was writing and filming the TV movie and finishing the scripts for the first season. 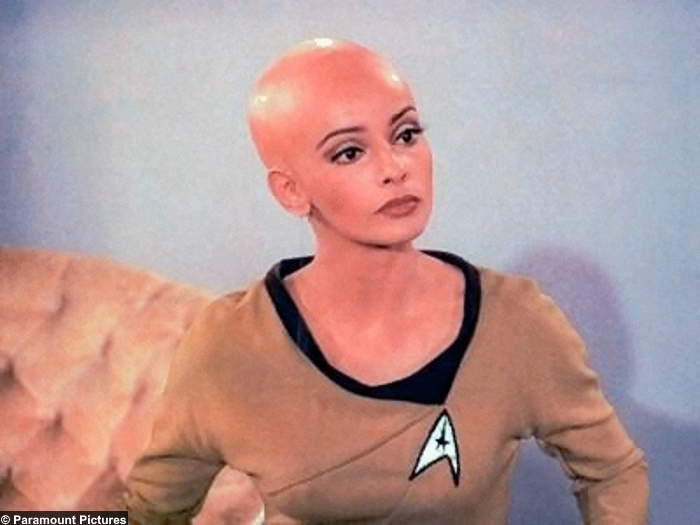 The TV movie was set to bring the Enterprise to earth for the first time in franchise history. The story, entitled “In Thy Image” was to feature the crew saving the planet from an invasion by a giant alien lifeform and then relaunch a new five-year mission at the movie’s end. Roddenberry was excited by the story, as well as other scripts he’d read (both to be used as new episodes for the show and from the days when he was trying to get a movie off the ground), giving him confidence that the new Star Trek show (now entitled Phase II) could far surpass the original series. On the production side of things, everything was ready to go.

And that’s when the carpet was yanked.

Alan Dean Foster, the acclaimed science fiction and fantasy writer who had been hired by Roddenberry to draft the TV movie, met with leaders at Paramount to pitch them the story for “In Thy Image.” The meeting was supposed to be a formality, he thought, since production on the new series was already well underway. Once he arrived, however, things quickly turned south. Paramount executives said that his story seemed more fitting for a movie than a TV show. Perplexed, since he was writing a TV movie after all, Foster pressed for more information. That’s when he was told that the budget for the new series was getting too out of hand, and that Paramount was getting cold feet on launching a fourth TV network (this was after the announcement had been made, mind you, and promotional material was already being circulated hyping the PTS and Star Trek Phase II). Suddenly, not only was Paramount passing on Foster’s script, they were cancelling the whole operation.

Having already spent half a million dollars in pre-production work (including the building of a new Enterprise model and the signing of cast members), Paramount toyed with the idea of selling the rights to the TV movie (and subsequent series) to one of the big three networks. They backed off that idea when they realized they’d have to cede too much control over the franchise. Instead, after years of work and hundreds of thousands of dollars spent, Paramount decided the best course of action was to just turn the franchise into a motion picture series. 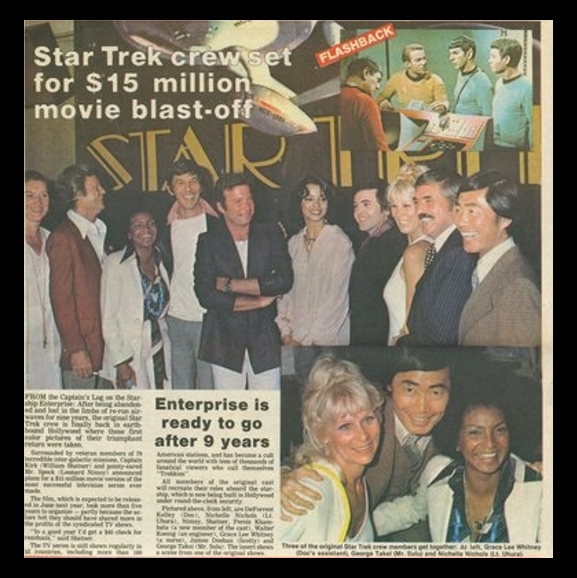 …Which is exactly what Gene Roddenberry wanted in the first place.