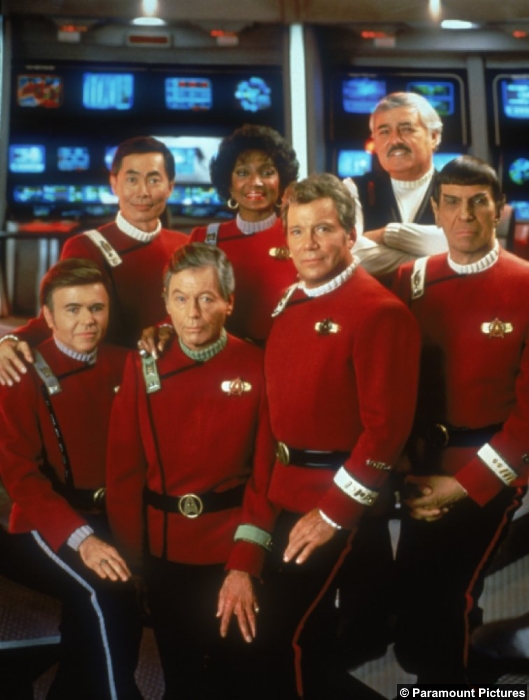 And then there are the original films. Star Trek II-IV offered the most complete cinematic experiences for Trek fans, while the first motion picture brought Trek’s cerebral side to the forefront, with mixed results.

By 1991, Star Trek was at its absolute peak. The Next Generation was a ratings champion on syndicated TV, reruns of the Original Series played across the nation to big numbers, early plans were being discussed for a new show (to be DS9) and apart from one hiccup, the franchise was going strong on the big screen as well.

Of course, that hiccup happened to be one of the worst received movies in the franchise and one of the biggest financial disappointments of the year: Star Trek V. While there is much to love about the film, even the most ardent fans have to admit it was a step down in quality from the trilogy of films that preceded it. Whereas “the trilogy” of Star Trek II-IV injected morality, pathos, wit and Shakespearean themes to the series, Star Trek V was mostly cheap, corny, ham-fisted and dumb. It had its moments of joy, but they were few and far between. It was the perfect passion project for director William Shatner.

After it bombed, Paramount considered letting the franchise die and instead focus on the TV output, which was going strong. The franchise’s 25th anniversary was rapidly approaching, however, and the studio decided to do one more proper and final film for the Original Series crew. The trouble was, no one could decide on what to do.

Roddenberry was in poor health and hadn’t maintained creative control over the film franchise since the original movie underwhelmed critics. II-V producer Harve Bennett wanted to revisit an old idea that would have focused on the Original Series crew as cadets in Starfleet Academy (same characters, new actors). The idea was rejected but Bennett refused to consider other options so he was released from his contract. Chekov actor Walter Koenig wrote a treatment for a movie that would have featured the original cast all forced into retirement for being too old and out of shape, only to be drafted back in to save the day in the middle of a Romulan/Klingon war. At the end of Koenig’s script, all of the crew except for Spock and McCoy would be dead, leaving the two survivors to carry on bickering into old(er) age. Oh and there were also space worm monsters.

Shockingly, it was rejected too. 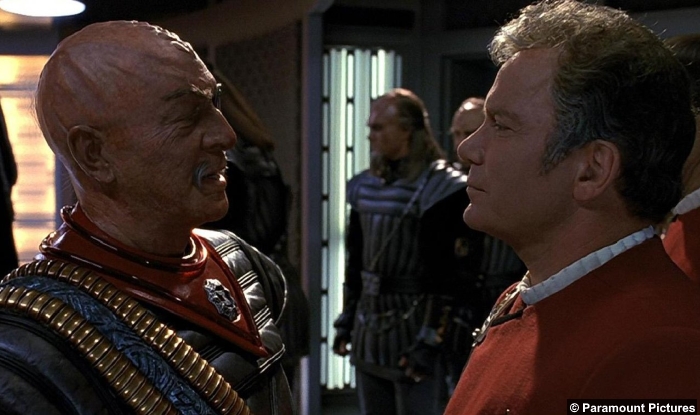 Looking to return to the high water mark of the (film) franchise, Paramount turned to the two men who brought the series to its most acclaimed and successful heights: Leonard Nimoy and Nicholas Meyer. Nimoy of course directed III and IV, whereas Meyer directed II and wrote IV. Together they created a story, based partially on current events (the fall of the Berlin Wall and the end of the Cold War) that also explored the age and impending retirement of the Original Series stars (both on screen and off screen).

It’s here where Star Trek VI is at its most controversial. No one argues against the great cinematic presentation, or the more grounded acting compared to part V, or the moody score by Cliff Eidelman. Where you find contention is in the depiction of the Original Series crew as everyone’s racist, cranky old uncle at Thanksgiving.

Early in the movie, when it is revealed that the Klingon Empire will starve to death within a generation, Kirk argues to let the “animals” die. Granted, he’s personally bitter due to the murder of his son (which is a major plot point in the film), but other characters are not given such justifications. Later, after a fancy dinner between the crew and Klingon diplomats, Uhura and Chekov make snide comments about the way the Klingons eat (with their hands). Other racially-charged shots are peppered throughout the film, the most famous of which is a line originally written for Nichelle Nichols; it would have seen Uhura quote the title of the famous race-relations comedy “guess who’s coming to dinner.” Nicholls refused to say the line so it was given to Koenig.

Most controversial was the speech given Admiral Cartwright (played by legendary black actor Brock Peters) who spoke out against allowing the Klingon’s safe haven in Federation Space. The speech was laced with not-so-subtle racism and earthling supremacy. It was so viscous that Peters needed multiple takes to get through it without breaking down.

But controversy-aside, making the central idea of the movie about the central “conflict” of the series (Kirk and co. vs Klingons), which it self is an allegory of the west’s central conflict with the USSR was great storytelling. To that end, if the Enterprise crew had been too Roddenberry-esque (enlightened, superior, “above” such sins) then there would be no drama. Meyer was never bound to the “utopian” fantasy future that Roddenberry cultivated and perfected in the 24th Century shows. He wanted to see imperfect people wrestling with morality. That may not be Star Trek in its purest form, but it does make for good entertainment.

In a way it’s a fitting end to the voyages of the Enterprise’s original crew.

There are two ways to wrap up and say goodbye to an adventure series: You can go one one last quintessential adventure, that kind of typifies everything that had happened in the past, or you can deconstruct the whole thing and blow it up like a demolition crew does to an outdated office building. If you want to see a quintessential Original Series adventure, feel free to enjoy Star Trek V (I enjoy it!). But if you want to see the “end” of the Original Series, this film has it.

The characters are old, ready to retire until the exact moment when their retirement is announced, at which point they’ll say—to quote Spock—“go to Hell.” They’re cranky, put-out, battle-worn and tired. But when the clarion call rings out, they all rise up and become the heroes they were a generation before. Kirk and McCoy get an adventure on a snowy planet, Spock gets to play Sherlock Holmes, and everyone else gets moments to shine.

Except Uhura, who can’t even speak Klingon.

It’s just as deep as Wrath of Khan, just as dramatic as Search for Spock, just as fun as Voyage Home, and just as banterous as The Final Frontier. At the end of it, Kirk and company have not just saved their ship (as they did multiple times on the show), and not just saved the planet Earth (which they did twice previously in the films), but they saved the entire quadrant by exposing the Klingon/Federation conspiracy, saving the President’s life and ushering in peace with the Empire. 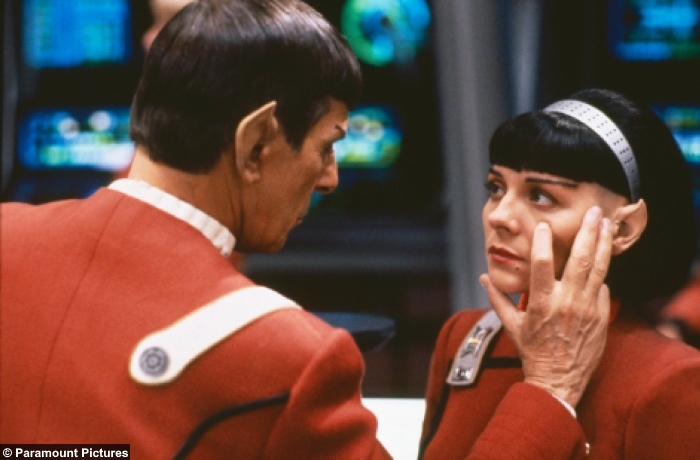 And with the adventure finished and the quadrant saved, Kirk and crew were able to ride off into the sunset in a way The Final Frontier did not allow them. They left as heroes, not only on film but in cinema. Even though Paramount short-changed the film with a budget that was less than 30 million, and even though it was released only two years after the disastrous Final Frontier (which only grossed 60 million on a budget of 33) Meyer and Nimoy crafted a film that surpassed expectations, sent the series out properly and impressed audiences enough to earn it 100 million at the US Box Office.

Kirk would get a second swan-song a few years later but this was really the Enterprise crew’s “legacy celebration” and goodbye, and a proper one it was.

A few years later the torch would be passed to the crew of the Next Generation and they too would kick off their cinematic voyages with a rocky start. but we’ll talk about Generations next month. Until then, here’s to the original crew of the USS Enterprise…