I look forward to the next one when they save the whales!

I kid. Other than blowing up the Enterprise (not a spoiler to anyone who has seen at least one fifteen second commercial), there’s nothing in common with The Search for Spock. That’s automatically an improvement over Into Darkness, which aped Wrath of Khan so egregiously it insulted the intelligence and good wishes of every Star Trek fan who watched it.

After Into Darkness did big box office there was little reason for Paramount to listen to the bubbling discontent of Trek-faithful who longed for a Star Trek movie that captured the spirit of the Original Series. After all, the last movie “for us” was the abysmal Star Trek: Nemesis, which bombed at the box office harder than any Trek movie had before it. Paramount shifted gears radically (as opposed to just doing a traditional Star Trek movie better) and the result was a box office success in the form of Abram’s Star Trek (2009) and Into Darkness. Since then, JJ went off to revive Star Wars (his true passion project) and Paramount turned to an unlikely director, Justin Lin (of Fast and Furious fame) to helm the next one. The good news was that Orci, Kurtzman and Lindleof (the trio of turds that wrote Into Darkness) were out and life long Trek fan Simon Pegg (also Scotty) was in as writer. Fans were still suspicious of Lin, but most seemed to accept that he was a good director (the question was whether he would bring a more contemplative take on Trek or just continue with the recent tradition of mindless action films).

Then the trailer hit, with its Beastie Boys music, motorcycle chases and non. stop. action.

There was wailing and gnashing of teeth.

Simon Pegg, Justin Lin, everyone and their brother involved with the movie insisted that the trailer did not convey the tone of the movie. They promised an adventure on par with a big budget Original Series episode. They promised a slower pace, a meatier story and the right kind of action, adventure and “romp.” The promised a movie worthy of celebrating “50 years of Star Trek.”

Now that it’s out…does it do justice to a half-century TV and cinema institution? 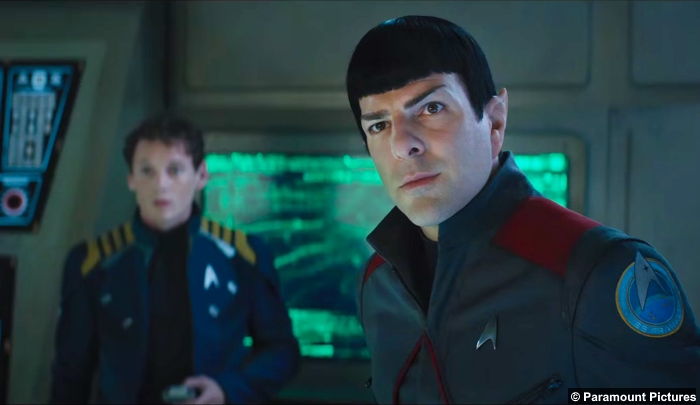 It was good. It wasn’t great and it didn’t redeem the awful Into Darkness. It seems like there’s a ceiling that these movies simply aren’t going to break through; there’s a certain kind of way these new movies are going to be made and that’s going to limit how much a crotchety old school fan like me can ever fully enjoy them. But setting that aside, and considering it on its own merits…

Again, I liked the 2009 reboot movie (it was fun, but shallow) and despised Into Darkness (it was derivative and horribly, horrible written). My bar for this movie was low, but my hopes for it were high. I sat down to watch the first reboot not knowing what to expect. I had no expectations so I was happy that I enjoyed the (shallow but fun) experience. I sat down to watch Into Darkness expecting to like it at least as much as the first one, and hoping it would improve on the things I didn’t like. Instead it killed my enthusiasm for the entire cinematic universe JJ had created. With this one, I sat down just hoping it would be passable. I wanted it to be okay. I needed it to be okay. I don’t like not having Star Trek in my life.

So while I wasn’t pleasantly surprised that it was good, I was certainly very relieved that it wasn’t an abomination. It was good; it was even slightly better than the 2009 film. The best thing I can say for it is that it felt more like Trek than the previous two. It really did have a “big budget episode of TOS” feel to it, just like they promised. It wasn’t very cerebral and it didn’t really explore the human condition, but the original show rarely ever did that either. For every episode like City on the Edge of Forever or A Taste of Armageddon, there were ten episodes like The Arena and Amok Time. Those are classic episodes; they just aren’t the kind of contemplative, cerebral episodes that The Next Generation would make the norm (and which I grew up watching as my first taste of Star Trek).

This movie isn’t based on The Next Generation, though, so I’m fine with them doing a fun “away mission” type movie. It captured the spirit of adventure the original show often had, while dialing back some of the pacing problems (and script issues) that JJ’s movies stumbled with.

There are issues that still bother me, but after three films, and two different writer/directors I’ve come to accept that “this is Star Trek” now and that it’s different than what I knew to be Star Trek for so many years.

(1) Spock is still too emotional.

He smirks, he scowls, he laughs, he cries, he howls in pain. It’s so very human, and were it not for those pointed ears of his and one scene that reminds us that his anatomy is very different from our own, you might forget he’s supposed to be an emotionless, logic-driven (half) alien. The in-universe explanation for why he’s so different from the Spock of the Original Series is that this Spock watched his planet be destroyed and his people become an endangered species (in the 2009 film). That’s enough to mess with a person, it is argued. That’s fine and a satisfactory-enough explanation, but it’s not the way they arrived at the destination that annoys me; it’s the destination itself. I don’t want Spock to be so emotional. Zachary Quinto looks the part, but even when he’s being “traditional, logical Mr. Spock,” the bland delivery that the character calls for (that Nimoy did so perfectly) just comes off as condescending and jerky. It’s the difference between Nimoy, who played Spock as unintentionally smug, and Quinto, who plays him as intentionally smug. It annoys me. But that’s the new Star Trek and I just have to accept it.

Kirk and Spock have moments, Kirk and Bones have moments, Spock and Bones have moments. But countless Original Series episodes ended with all three of them sharing a moment. The real dynamic of TOS, and one of the things that made it so special was the relationship between those three. Spock is analytical and emotionless, McCoy is all about gut-instinct and feeling. Kirk is their mutual friend that they are pulling in both directions; he straddles the fence. These movies don’t really explore that and instead just pair the them up  in different combinations. And then there’s the great bromance between Sulu and Chekov that is basically non-existent in this universe. Also, the Uhura/Spock relationship that has been around for three movies has yet to really work, but that might just be because it’s so foreign to see Spock in such a traditional, human, kind of relationship. 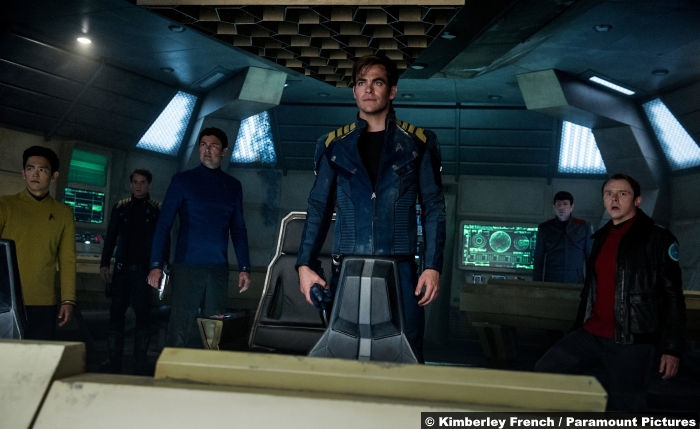 (3) It’s still a little too much “action” and not enough “science-fiction.”

There are moments where tech-talk dialogue is raced through at breakneck pace and I wonder how those precious non-fans that Paramount covets so dearly sat through it without checking out entirely. That’s just clever words on paper, though. There’s no cleverness put into practice in the movie, like when Kirk outsmarted Balok with the “Corbomite Maneuver” or when Spock outsmarted Khan in the Mutara nebula by thinking “three-dimensionally.” The climax of this movie features the crew diverting a swarm of small attack vessels by sending a “loud, disruptive” signal to jam their ship-to-ship communications. That signal? “Sabotage” by the Beastie Boys. It’s an eye-rolling moment and it made me just sigh and say “this is Star Trek now.”

But it’s fine. It’s silly. It’s not very deep, it misses the mark here and there, but it’s not insulting. It’s not the Trek I grew up with and it probably won’t be rewatched as religiously the way I do the original TOS films and First Contact, but it was good. I didn’t hate myself after watching it, so that’s a plus compared to Into Darkness.

The humor is on point too, and Chris Pine (Kirk) and Karl Urban (Bones) are especially great in their roles. There are also many (too many to catch) charming nods to Star Trek’s past fifty years: The closing credits have a light-blue TNG-esque font , Bones tells Kirk “at least you have your hair!” The music is a great mix of the new themes introduced in the 2009 movie and some old school cues too (some of the action scenes have musical cues that sound right at home in the original series). There’s even a nod or two to Star Trek: Enterprise (in ways that would spoil the plot). The starbase the ship visits is called “Yorktown” which was the original name for the Enterprise when Gene Roddenberry was first creating the series. Finally, at one point you get a chance to see the original crew of the starship Enterprise, in a moment that brought a tear to my eye. And the giant green hand from Who Mourns for Adonais is both mentioned and (briefly) seen in the closing credits! 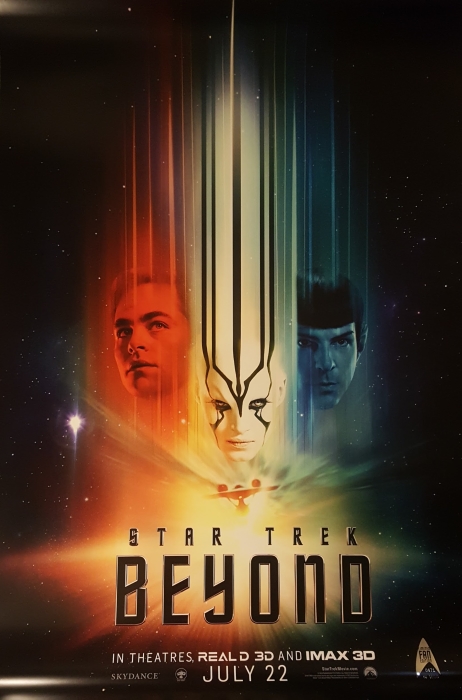 8/10 = There are enough delightful moments to outweigh the disappointing parts.

The cast and crew said many times that their goal was to do justice to Star Trek’s vast legacy. This isn’t a perfect movie, but they have done an admirable job in their mission.