He lived long, and prospered

For almost fifty years Star Trek has captured the imagination of people all over the world. It spans nations and ethnicities, it unites people regardless of culture, religion or social class. Star Trek is a touchstone of the human spirit. It’s message of a peaceful world seeking to expand its knowledge of the vast universe around them is a theme so large in scope, it’s depiction of a united future helped to unite the present. Granted, humanity in the 20th (and now 21st) century is a far cry from the 23rd (later 24th) century’s depiction of a “world as one,” but one thing Star Trek did was give us a clear (and in vivid technicolor) illustration of how things could be. 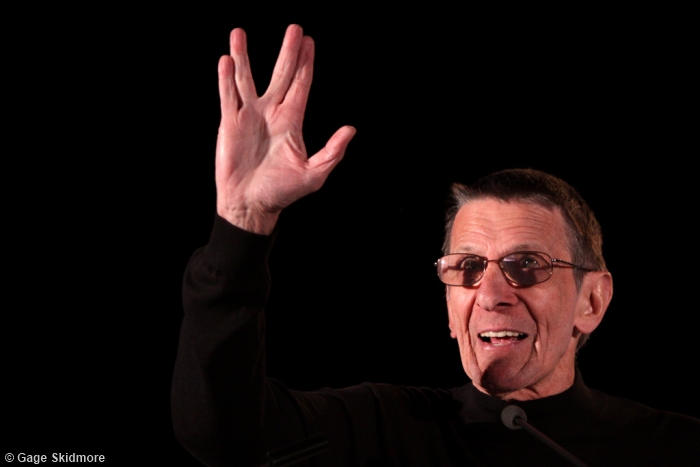 He was never “the star” the way William Shatner was, and he lacked the expansive career that Shatner had. He did not have the acting pedigree of Patrick Stewart, nor was he as active on social media as someone like George Takei. He was not a regular at fan conventions (though you’d see him from time to time), and his career post-Star Trek did not keep him in the spotlight with huge movie deals or big TV gigs. His character limited the amount of range he could show in his acting, which is ironic considering the warmth and humor he maintained behind the scenes.

He played a Vulcan; though technically he was half-human, his personal decision to suppress that part of his life defined his character and allowed him to spar regularly with Star Trek’s other key co-star, DeForest Kelly. Kelly’s Dr. McCoy was a feisty, emotions-on-his-sleeve, old Tennessee doctor. With his thick drawl and folksy one-liners, he was the perfect foil for Nimoy’s Spock, who was stoic to the point of driving McCoy to fits of shouting. The dynamic between Spock and McCoy, working as quasi-shoulder angels to the final decision maker, Captain Kirk, helped Star Trek to stand out among the other sci-fi shows that aired in the mid-60’s, particularly Lost in Space.

Yet, despite playing the straight man, the stiff, the cold emotionless Mr. Spock, Leonard Nimoy became the heart and soul of Star Trek. 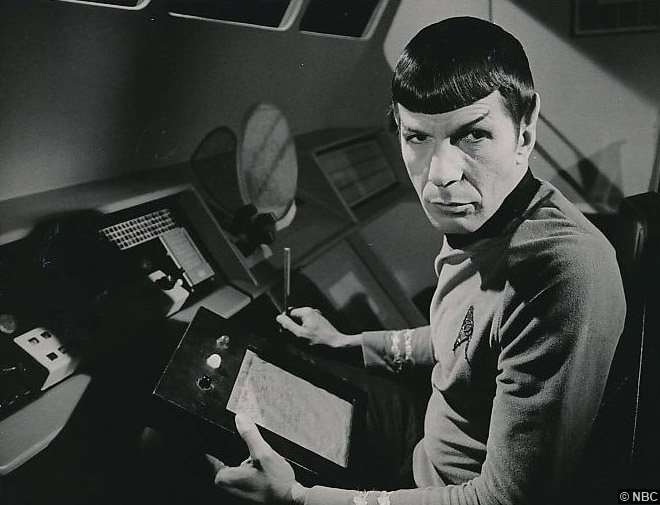 Nimoy portrayed Spock as a curious observer of humanity’s strengths and weaknesses. The character, in the wrong hands, could easily have come off as preachy and smug, but Nimoy walked the fine line and managed to show Spock as an honest outside-observer. With his character accepted, the fans began to see Spock as a mirror reflecting the soul of America. His calm observations about 23rd century humanity made audiences come face-to-face with the changing times of middle 20th century; the late 1960’s to be exact. That meant coming to terms with the horrors of Vietnam, the struggles of race-relations and the proclivity for people to react with fear and premature violence when peace and friendship is always an (often ignored) option.

After Star Trek was cancelled, Nimoy found other work, notably on the TV show Mission: Impossible, where he was a regular cast-member for two years. He hosted a mystery show “In search of…” and also starred in the cult hit “Invasion of the Body Snatchers.” He kept himself busy, but nothing came his way that offered a role that could approach the impact that he achieved as Mr. Spock.

During this period in the 1970’s Nimoy released the first of his two major literary works: “I am not Spock.” The title was naturally eye-catching, and in the book the actor tried to distance himself (as had so many other Star Trek cast members) from the role that made him famous.

Though he would return to the role just a few years after the book’s release, Nimoy continued to venture into other avenues of art and entertainment. He acted in stage plays, directed movies and dabbled in photography. Still, when the next Star Trek movie entered production, it did so with Nimoy (reluctantly) resuming his famous role. The production of the film was tumultuous, and upon release it was considered a disappointment. Paramount moved forward with plans for a sequel, with a slashed budget and new creative forces (producer Harve Bennett and director Nicholas Meyer) in charge. Nimoy was asked to return and did so only on the condition that his character be killed and he be done with the franchise for good.

As it turned out, Nimoy and Meyer worked well together, and the production of Star Trek II was such an enjoyable experience that Harve Bennett and Nimoy secretly filmed an “out” at the end of the movie as a way to bring the character back if Paramount moved forward with a Star Trek III. They did, and Nimoy took the reigns as director. He and Meyer collaborated again on Star Trek IV, which saw Nimoy direct once more with a story both he and Meyer brainstormed. Although Star Trek III was not a big of a hit as part II (either financially or with critics), Star Trek IV was a huge success. The duo teamed up once more, after the disaster of Star Trek V, and sent the “Original Series” crew out with a warmly-received final story that Meyer directed and Nimoy envisioned (the end of the Federation and Klingon Cold War).

After Star Trek VI, Nimoy penned a sequel to “I am not Spock” entitled “I am Spock.” In it, the actor came to terms with the magnitude of the character, the impact he had on so many people, including himself, and his appreciation for what Spock and Star Trek meant to him.

Nimoy used his position as a Star Trek alum to expand the horizons of art for the die hard fans of his work: He published poetry, avant garde music and photography, but through each of his endeavors he never forgot to embrace the fans who loved him and grew up watching him on television or in the theater. Whenever he appeared in front of his fans, he never failed to be kind, meek and considerate to all who approached him.

He appeared in public less and less as he grew older and weaker. He had suffered from COPD (chronic, obstructive, pulmonary disease) at least since early 2014, and spent his final weeks of life in and out of the hospital.

Four days before he died, he sent out what would be his final message to the public. His concise words were poetic, contemplative and inspiring: Much like the man himself:

A life is like a garden. Perfect moments can be had, but not preserved, except in memory. Live Long and Prosper.

Farewell to a kind and sweet man: Science-fiction’s greatest ambassador, and Star Trek’s heart and soul.