At its worst, Star Trek deserved all the ridicule it ever got.

Previously, we looked at the original Star Trek series at its very best, and noted that, when it fulfills its potential, it is some of the finest sci-fi in television history. The good outweighs the bad with Star Trek, but that’s not to say there isn’t any bad. At its worst, Roddenberry’s Star Trek deserved all the ridicule it ever got. There are some episodes of Star Trek that are so cheesy they give a bad name to the honored title of “nerd.” As we celebrate the franchise’s fiftieth anniversary this year, let’s break down what didn’t work with sci-fi TV’s crown jewel.

So what went wrong, when Star Trek went wrong? To start with the shows sometimes had too much cheese (without enough heart). There are some cringe-worthy moments in Star Trek. Its most loyal and hardcore fans can appreciate most of the episodes, and some even outright enjoy them, but you’d be hard-pressed to find much support for the very worst of it.

Also, while some of the sci-fi language has seeped into popular culture, there’s ten times as much technobabble that has remained a part of the show’s lexicon, to an embarrassing degree. Everyone knows what we mean when we say “warp speed” and even people who’ve never seen an episode know the phrase “beam me up, Scotty,” but listen to characters talk about “phase-inducers” and “trans-modifiers” (like you’d hear in The Next Generation) or even something as quaint as “reroute the auxiliary bypass couplers” (like you’d hear in The Original Series) and it’s enough to make your head spin. Regular fans are so used to hearing that stuff that it’s become white noise, but non-fans are instantly put off by the gibberish. It’s like pro wrestling fans: You don’t even notice anymore that you’re watching two guys in their underwear pretend fighting. It’s just so “usual” you don’t appreciate what it’s like seeing it as a first-time viewer.

Finally, the worst of Star Trek is defined by stories that just failed to hit the mark. Either they are lazy stories, stories that are too dated to the era in which they were produced or just embarrassing plot lines that even the most died-in-the-wool fans cringe at, Star Trek has some clunkers in its episode library. You want examples? 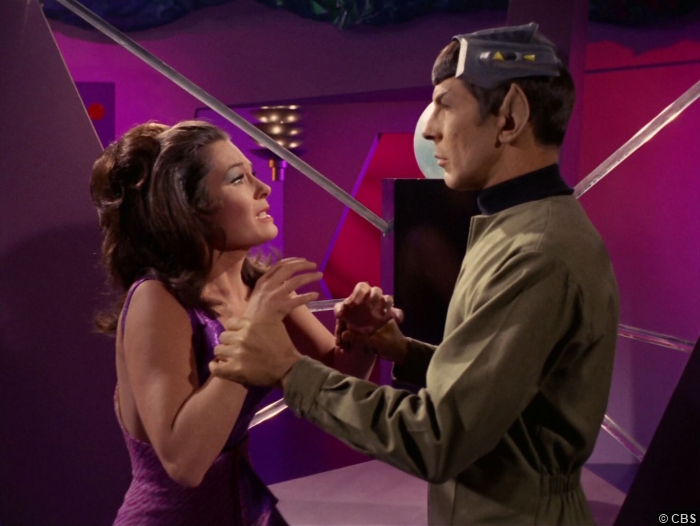 From the very very beginning of this episode it’s clear we have a problem. At the beginning of every episode, after the credits roll, we’re given the title of the week’s show. “Spock’s Brain” flashes on the screen and with it connotations of cheesy B-movies flutter in my mind. Spock’s Brain sounds like something the Mystery Science Theater 3000 gang would roast on their show. And that’s just the title. Watch it and it’s clear that this episode more than lives up to its bad first impression.

The premise of the episode is that an alien (played of course by a beautiful woman) comes aboard the Enterprise and, through her mad alien skillz (actually a power bracelet), incapacitates the crew and steals…Spock’s brain. What follows is a race against the clock to recover the brain (Spock’s body can survive without its brain for 24 hours….I know, I know).  By the time Kirk and co. come face to face once again with the villainess the show really jumps the shark. How do they take her out, you ask? Was it a well-aimed phaser shot? Was it through some cunning strategy whereby Kirk outmaneuvers and outsmarts the alien female? Nope. Scotty pretends to faint and amid the distraction Kirk just takes her weapon from her and that’s that.

McCoy puts Spock’s brain back where it belongs with minutes to spare and the crew flies away, trying desperately to forget the whole thing happened. And so does the audience. Spock’s Brain was the season premier of the show’s final season, after moving from Thursday nights to “the Friday night death slot” and it offered nothing to make NBC execs think they made a bad decision moving the show, and probably made them wish they’d put it out of its misery sooner.

AND THE CHILDREN SHALL LEAD 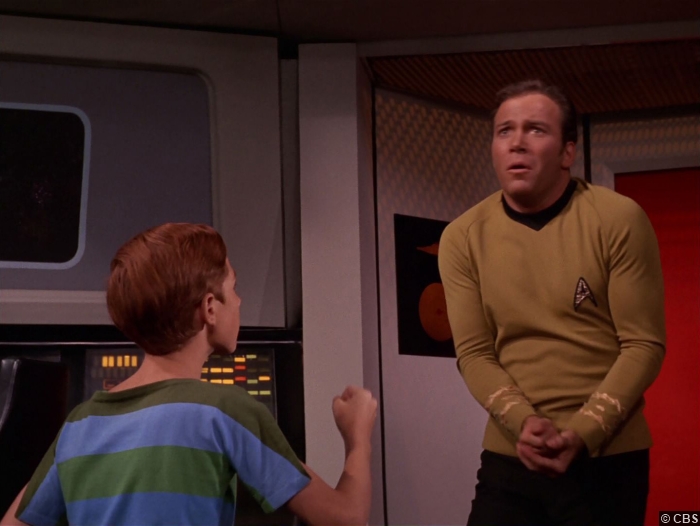 Coming just three weeks after Spock’s Brain is this steaming turd of a show. The premise involves a small group of children who seem to be the only survivors of a doomed scientific expedition. The Enterprise brings them aboard where the children use some sort of psychic powers to trick the crew into flying to a different planet. The children appear to be under the leadership of a man named Gorgon, who can only be seen by them. Naturally, Kirk, Spock and McCoy discover the ruse and make plans to break the kids hold over the crew. The way they go about this is incredible, and not in a good way. Nevermind the fact that the crew of bold space explorers aboard the Enterprise is almost entirely incapacitated by five preteens, that’s bad enough. The way the hero trio save the day is laughably bad.

Basically Spock deduces that Gorgon has the kids in a kind of spell (made possible by the amnesia the kids are suffering, as a result of the trauma of seeing their parents die) and that he’s manipulating them to suit his purposes. Who is Gorgon, then? Basically he’s a ghost. The episode never uses that word, but that’s the insinuation. How does Spock propose they break the kids of the spell? By showing them pictures of the kids playing and being happy with their parents…and then showing them their parents horribly murdered bodies. Oh is that all! Just show the kids their dead parents, and that’ll save the day? Exactly. The kids snap out of it, Gorgon’s hold over them is broken and the ship heads to a nearby Starbase to drops the kids off and be done with this terrible terrible episode.

THE WAY TO EDEN 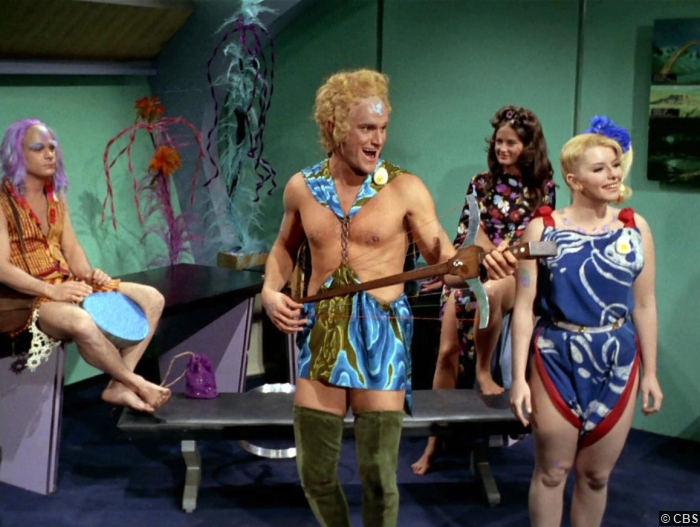 Finally we come to the pinnacle of bad Star Trek. We come to the apex of suck. The pièce de résistance of Star Trek trash. We come…to “the hippy one.” It’s so bad it’s known by non-fans. We tell them we love Star Trek and eventually the conversation will come around to “wasn’t there an episode with space hippies or something?” Yes. Yes there was. Once again coming in season three, The Way To Eden begins with a moment of action, as the Enterprise chases down a stolen space ship on its way to the Romulan Neutral Zone. The Enterprise catches the vessel and beams the crew aboard, only to discover that they are…space hippies.

That’s bad enough, but it just goes on like that. They call Kirk “Herbert” (which is space hippy slang meaning “a square”) and find comradery with Spock, who—of course—understands their hippy culture and speaks their hippie language. Things get hairy when the hippies incapacitate the crew (there’s a pattern there, if you’ve noticed) and redirect the ship into Romulan space. They’re looking for the Biblical Garden of Eden, which they believe to be a planet beyond the Romulan Neutral Zone. Suffice it to say, as usual, the crew comes around, they beam down to the planet (which looks like what you might image Eden looking like) only to discover the plantlife is toxic and the air is acidic. Everyone beams back to the Enterprise and flies away before the Romulans show up. Spock tells the hippies to keep looking and that the real Eden might be out there. Mercifully the episode ends.

In the previous article, we noted how Star Trek—at its best—embraced the 60’s social revolution. Well, at it’s worst it embraced the cornball dorkiness of the same decade: B-movies, cheesy pulp, and hippies. It’s amazing that Star Trek managed to survive beyond its third season. The show was obviously cancelled but would live on in syndication (one of, if not the first show to be “rerun” after its original airing) and despite the bad it had in its repertoire, the show’s cult following grew and grew, so much so that—after the success of Star Wars—a major motion picture became a foregone conclusion (but that’an article for another time). I guess that’s because the good out weighed the bad.

But man, what bad it was!