At its best, Star Trek embraced the 60’s social revolution.

Fifty years ago “The Cage” was first screen to NBC executives, in the hopes that it would be picked up as the first episode for a new science-fiction show called “Star Trek.” The one-hour pilot—which was not seen by a wide audience until it was inserted as “historical footage” in The Original Series’ only two-part episode, The Menagerie—looks very different from the show that eventually made it to air from 1966-1969.

Originally, Star Trek creator Gene Roddenberry wanted a cerebral show, that only accentuated the thinking with a few action scenes. NBC was unimpressed however, but not so much as to outright reject the whole premise. Instead they made the very rare decision to order a second pilot. Of all people, you can thank Lucille Ball for Star Trek getting a second chance; the most famous female actor in TV history was a fan of the concept, and personally like Gene Roddenberry. Her studio “Desilu” foot the bill to fund the second pilot, and the result was “Where No Man has Gone Before.”

Getting a second chance, being reborn, starting over, and other like-phrases have applied to Star Trek from the beginning. With its second pilot the show found the formula that won over the NBC executives. It had a new, younger Captain in command of the ship, it’s tone was more visceral—a reversal from The Cage—with the cerebral moments being used as the punctuation marks to the action scenes. Instead of a show that would have been contemplative and deliberate, Star Trek became a Western in space; even the famous opening monologue declares the galaxy as “the final frontier.”

Still, Gene Roddenberry was not content to tell popcorn action stories with little substance. He used the science fiction setting the way the medium was meant to be used: As an avenue to explore taboo ideas and make people stop and reflect on their own place in society, without their even realizing it. Star Trek tackled gender equality, civil rights, the Vietnam War, Xenophobia and more. It asked tough questions and took bold stands, but because the whole thing was sugar-coated with a science fiction backdrop, the very conservative censors and wary NBC executives never raised a fuss.

Unfortunately ratings were weak and the show was cancelled after just two years on the air.

However, in another unprecedented move, Star Trek was resurrected once more. NBC, being flooded with letters from angry viewers, brought the show back for one more season before cancelling it for good. The nature of its cancellation and resurrection helped the show find a foothold in a new TV market: Syndication. Through “reruns” Star Trek was able to touch a new generation of viewers and present its dream of a brighter future to the young minds just growing up in the world of the late-1960’s and its turbulent social revolution.

Three episodes stand out, among many that dared to offer social commentary to prime time television: 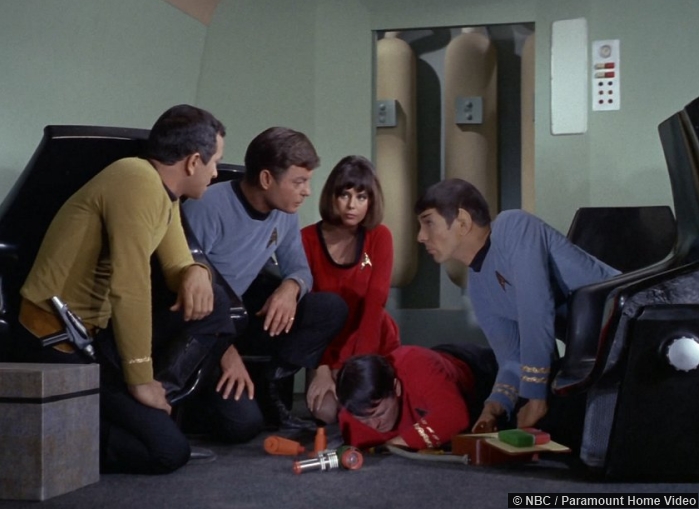 The premise of the episode concerns an away mission—with Mr. Spock in command—that lands on a planet. Damage to the shuttlecraft strands the team, at which point some begin to question Spock’s ability to lead. Being a Vulcan, his having rejected emotions is used against him, particularly by one subordinate team member. The episode openly challenges the core beliefs of the #2 star of the show (and, without question, the franchise’s biggest breakout character), while also exploring the ugliness and unfairness of racism. It’s wrapped up in an outerlayer of standard TV adventure; it’s a thriller of an episode, not unlike many that other TV shows do from time to time, but it’s the message the show is subtly presenting that makes it stand out.

Watch as Spock’s every decision is questioned, particularly by one angry Lieutenant. Decisions that are made weekly on the show were suddenly presumed to be flawed or “the wrong approach” and Spock’s Vulcan heritage is obviously marked as the reason for the sudden doubts. He may not have looked like Uhura, and in fact has she been the one under fire in the episode the message might have been overlooked as too heavy-handed. Instead the “white” male Spock was at the center of the racism, and the way he handled it was offered up by Gene Roddenberry as the template for other oppressed people to follow.

A TASTE OF ARMAGEDDON 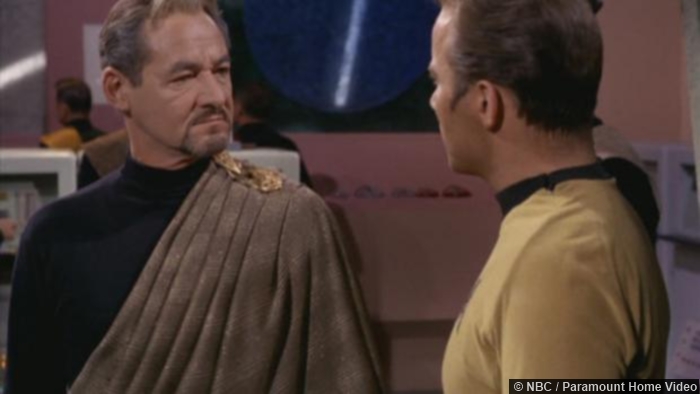 In this episode we’re introduced to two planets that have been at war with each other for centuries. Kirk and company beam down to investigate a world that they hope to invite into the United Federation of Planets. Instead, soon after their arrival they are informed that the capital city had just been hit by an attack from their enemy neighbor-planet, and that half a million people had been killed. Looking around the capital, Kirk finds no dead bodies and sees no damage to any buildings. That’s when he learns the truth: The two planets eventually perfected their war-making skills to the point where they can simulate casualties and destruction with synchronized computers (one on each planet). When the computer logs a casualty, citizens are hauled away to death chambers. This, they defend, preserves the planet’s art and culture, while still maintaining the war that both worlds have grown so used to.

In full disclosure, this is my all time favorite Star Trek episode. When I first saw it I was blown away. Yes, to adults the message is a little too on the nose, but to a nine year old boy, it left an impression: This is a striking rebuke of the comfortability that technology can bring to a war. They had been fighting for so long they lost the value of life. They had developed such sophistication in their tech that war and killing each other had become impersonal and casual. This is Star Trek’s rebuke of Vietnam, and—to Roddenberry—the sending of soliders to die in some far away land, while the generals and war-plotters sit back and sip brandy. It rebukes the casualness of sending someone else to die for your cause. It was a timely message, and one that—as the best scifi does—has shown itself prescient every time another remote drone destroys a house 500 miles away.

THE CITY ON THE EDGE OF FOREVER 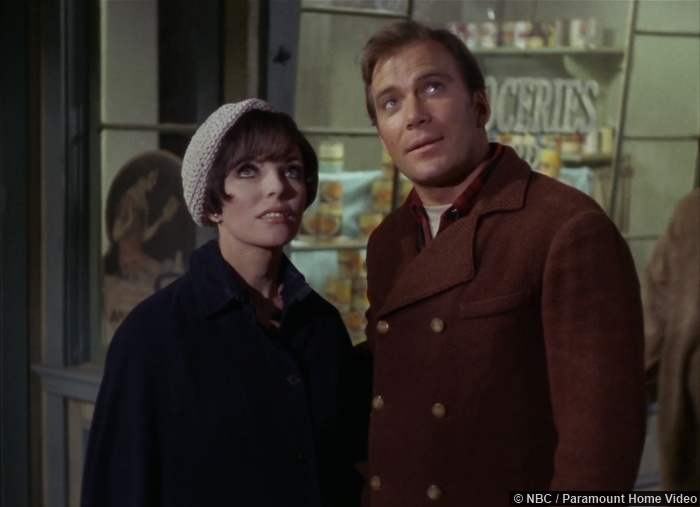 It’s considered by many the greatest episode of Star Trek.

Acclaimed scifi writer Harlan Ellison penned the script (with several small and one humongous change, against his wishes, made to the ending). The premise: Dr. McCoy accidentally injects himself with a medical-cocktail that drives him mad. He escapes down to a planet that houses a mysterious artifact, capable of traveling through time and space. The insane doctor uses it to return to Great Depression-era America, where he unwittingly alters history. Through his error, the Nazi’s win WWII (which has to be the most commonly used plots in Time Travel stories), take over the world, and create a future where the United Federation Planets does not exist.

Kirk and Spock, being in close proximity to the artifact, are insulated from the change to history. They then journey to earth’s past in an attempt to retrieve McCoy and fix the timeline. The plot is classic scifi pulp, but what works is the sincerity behind it, the minimal use of scifi tropes with a focus instead on the human element. The beautiful Joan Collins plays Edith Keeler, Kirk’s love interest of the week, and for the first time viewer there’s no reason to think she is anything but that. We soon find out that she plays a key role in McCoy’s altering of the future, and that puts Kirk in a very difficult position: In order for everything to return to normal, Spock informs the captain that “Edith Keeler must die.”

The drama turns into a tragedy as we see Kirk wrestle with the greater moral obligations and his own personal feelings. It all builds to the near-final moment of the episode when the moment to let her live or die occurs. What Kirk does, doesn’t do, tries to do, starts to do—whatever—was different on Ellison’s typewriter than what ended up happening on the screen. Either ending would have worked, and the one that was filmed gave us one of the most powerful climaxes in Star Trek history.

Later, in the movie Star Trek II, Spock would utter a very prophetic line: “The needs of the many outweigh the needs of the few, or the one.” Spock would go on to prove his belief in that motto, by sacrificing himself to save the Enterprise. That creed had its genesis here, as the value of life was considered in a no-win scenario: What is the value of life in general? Is one more valuable than many, or is all life truly equal? If all life is equal then we are morally obligated not to let one die in order to serve the needs of the many. But if one must die to help the many, then life is not truly equal. You see the philosophical debate that a “mere scifi show” can bring? That’s the magic that keeps Star Trek going, watched by people from all ages and cultures.

Incidentally, Kirk’s belief is that the needs of the one is more important, which is why he was willing to sacrifice his own career to save Spock in Star Trek III. His actions in Star Trek III are perfectly in line with his actions at the end of City on the Edge of Forever (which is why I prefer the show’s ending to Ellison’s script ending).

Nichelle Nichols, who played Uhura, likes to tell the story of her visiting Gene in his office after reading one of the latest scripts for the show. She wagged a finger at him and said “I’m on to you…” Gene asked what she meant and she replied “You’re writing morality plays…” To which Roddenberry held up a finger to his mouth, saying “Shh. Don’t tell anyone.”

From it’s inception and at its very best, Star Trek has been the home of thought-provoking, probing questions. It was skillful enough to hide its virtues and morals behind the phaser blasts and deep space standoffs. It promises us in its opening to “seek out new life and new civilizations” but its focus has always been on our own little blue marble in the galaxy. Exploring new worlds, cultures and societies is fun; bettering our own is paramount.