By the time (Star Trek) Enterprise found its footing, the carpet was yanked…

As we celebrate fifty years of Star Trek, CultofWhatever is looking back on each of the shows and film franchises that defined the Final Frontier.

We’ve talked about the Original Series and how, when it was great, it embraced the sixties social revolution. On the other hand, when the Original Series stumbled, it slipped into every silly cliche that doomed science-fiction from that era. The Next Generation took a little bit to find its mojo, but when it did it managed to surpass the original by expanding the franchise’s horizons. Deep Space Nine followed soon after, and though it was the red-headed step-child of the brand, it dared to be different and was rewarded with loyal fans, many of whom regard it as the best of the bunch. And then there’s Star Trek Voyager, which tried to be “more TNG” but ended up being “lesser TNG.”

Voyager, like DS9 and TNG before it, finished its run on its own terms after seven years on the air. But unlike TNG, which ended with higher ratings than it started with, and unlike DS9 which ended with more critical acclaim than it started with, Voyager limped to its finish line. Ratings were down, even as the UPN network had expanded its viewerbase, and the show never found the spark to launch it into the stratosphere of critical popularity. TNG started as a C- show that ended up an A+ program. DS9 started as maybe a C+/B- series that concluded with a string of A+ seasons and a final ten-episode stretch that was a Star Trek franchise-highlight. Voyager began as a C+ and basically ended the same way. After a decade and a half on the air the initial buzz that came with TNG’s premiere (“Star Trek is back on TV!”) had long since ended and the stories Rick Berman’s team were churning out were mostly filler-episodes; the stand-out gems were few and far between.

And yet, before Voyager’s meandering seventh season even began, Berman and Paramount announced that the next Star Trek show would launch only a few months after Voyager’s series finale. The promise was to return the show to its “Original Series” roots, making the new series a prequel to the adventures of Kirk, with a swashbuckling captain, less reliance on technobabble…and more sex, because nerds. 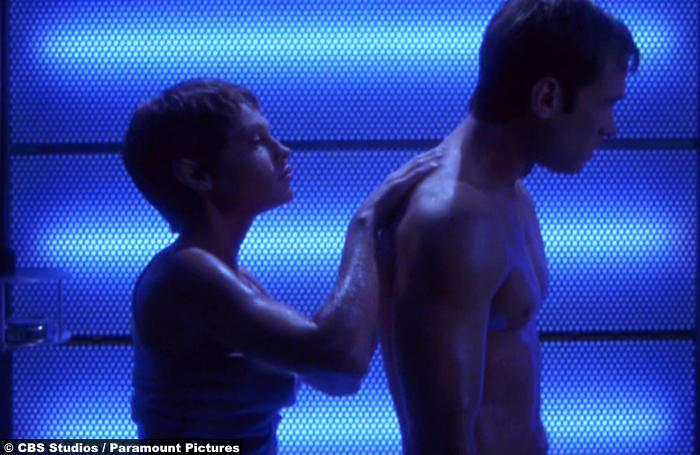 The idea of returning the Star Trek franchise to (before) its roots was an exciting prospect, but the announcement came with immediate red flags being raised. First of all was the fact that Rick Berman would continue to Executive Produce. While he mostly left Michael Pillar to run Roddenberry’s The Next Generation, he was very involved in the two spin-offs. But after DS9 got its feet wet, Berman shifted his focus to the upstart Voyager and allowed Ira Behr to guide the direction of DS9 (to that show’s great success).

There are multiple reasons why DS9 succeeded where Voyager stumbled, but one that can’t be ignored is the fact that Berman’s fingerprints were all over one from the very beginning and basically non-existent on the other after the first couple years. Really the only edict from on high that Berman ever insisted upon to the TNG and DS9 writers was that they should (barring a few notable exceptions) keep any and all references to the Original Series out of their scripts. The general consensus was that Berman was embarrassed by the kitsch and cheese of TOS and wanted “his” Star Trek show to be its own thing. Having him oversee a show that was supposed to take inspiration from TOS concerned many Star Trek fans.

Another problem was Berman’s choice of show-runner: Brannon Braga. He was a veteran Star Trek writer, having worked on TNG and Voyager, rising from writer to producer to co-executive producer. Enterprise was to be a show co-created by him, with his own personal flair being given to it. And what is Braga’s flair? High concept scripts that were reliant on technobabble, scenarios that required rabbits being pulled out of hats to solve the problem and very little humanity.

Braga’s best work was when he was teamed up on TNG with Ronald Moore. Together they were like Star Trek’s Lennon/McCartney. One had the big ideas but usually lacked the heart, and the other had the heart but occasionally had a wicked good idea too. After Moore left Star Trek (due to being fenced out of the Voyager writer’s room), Braga was left to handle the creative side of the show by himself. The tired plots of Enterprise’s first two seasons have Brannon Braga’s signature all over them, with big ideas wasted on characters the audience is never given a reason to care about.

Without a competent co-writer to pick up the slack on Braga’s limitations the show suffered out of the gate. Actually, I should correct myself: Braga did have a co-writer on Enterprise: Over half of Enterprise’s episodes were co-written by Braga and Rick Berman himself, the man with one previous Star Trek writing credit before Enterprise: TNG’s mediocre episode “A Matter of Time” (he also co-wrote the good TNG episode “Brothers” with Michael Pillar). So I guess, no, I don’t need to correct myself, since I said Braga needed a “competent” co-writer, and he didn’t have one. 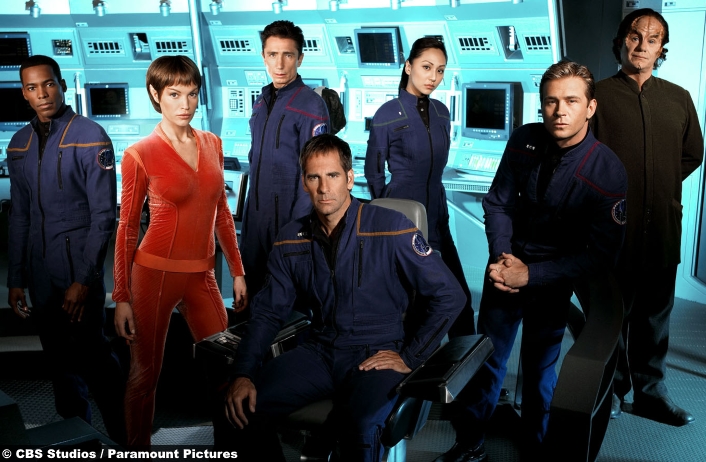 Enterprise stumbled and bumbled along for a year and a half when UPN stepped in and said that the show wasn’t working. Either a new direction would have to be given to the series or the show would be cancelled. Ratings were okay but not okay enough to justify the high budget each episode demanded.

For comparison’s sake: Voyager debuted (along with the UPN network) to 20 million viewers. That’s a staggeringly high number today, especially for a start-up network, but it was only considered “pretty good” in 1995. It ended it’s truncated first season with a little over 8 million viewers. After that, the show settled in at around 5 million viewers for the next several years, before dropping to an average of 3 million and then finally, in its seventh season it dipped to the low 2 million range. Enterprise premiered to only 12 million viewers, dropped to 9 million for its second episode and was down to 5 million at the end of its first season. By the end of its second it was under 4 million.

The shakeup Berman and Braga decided upon was a 9|11 allegory, by having a hitherto unknown alien race attack earth (because “earth” is basically “the U.S. in space”), killing millions. Enterprise then ditches its mission of exploration to become a war machine bent on finding the aliens and bringing them to justice. That sounds exactly like what Gene Roddenberry envisioned! Remember when everyone was angry that DS9 featured a war as the show’s major focus? No one cared anymore by the time Enterprise one-upped it. 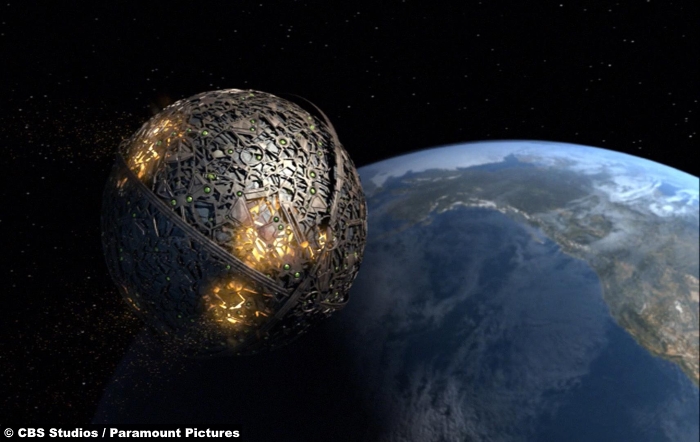 The third season of the show was a departure for Star Trek in one specific area: It tried to be more serialized. Berman’s insistence that Voyager and Enterprise offer a “new adventure a week” was finally out the window…sort of. There were still well-defined plots with beginnings, middles and ends every week, but there was a more clearly-defined arc that carried the show through the third season.

Credit where it’s due, though: This was long before the days of Netflix-binging. TV viewing habits were still focused on sitting down in front of your screen at a predetermined time once a week every week. Cable shows were beginning to offer serialized shows, but the networks were leery of scaring away casual viewers. Everyone likes to compare Enterprise’s season three with Ronald Moore’s Battlestar Galactica, but BSG didn’t air its first proper episode (the brilliant “33”) until sixteen months after Enterprise season three began. This was a very forward-thinking move, but it was probably a few years too early to catch on with network TV viewers: Ratings for the season continued to drop, with the show notching it’s first episode under 3 million viewers halfway through the year.

By the end of the third season Paramount ordered real change and Berman/Braga were out as the day-to-day creative force and Manny Coto (a guy who had written a couple season three episodes and, before this, was most famous for his work on Odyssey 5 on Showtime) was in. Coto took Berman’s serialized idea and simplified it, turning the fourth season into a series of mini-arcs that lasted 2-3 episodes at a time. His biggest contribution to the show, however, was his genuine love of The Original Series and his focus on making the fourth season into an exploration of the lore of Star Trek.

The fourth season was the ultimate in fan service. Old ideas were resurrected (the Gorn, the Tholians, the mirror universe, Kahn’s Eugenics Wars, and the formation of the United Federation of Planets). Old questions were answered (how did the Klingons get their ridges; how did the Vulcans become so logical). For the first time, Enterprise finally became the show it was promised to be: It was fun, it was fresh, it was “retro,” and it was well-written.

The ratings just weren’t there. A fifth season was teased, ideas were planned and concepts were talked about, but in the end it was not to be. It’s like…you know how John Lennon’s solo career started out really strong, with Plastic Ono Band and Imagine being just amazing records? And then he went and released Sometime in New York City and it was like he lost the ability to make good music. Mind Games wasn’t much better, either. Soon after he retired from recording, but a few years later he got the itch again and recorded Double Fantasy. It’s a great record (the songs he sings at least; ignore the Yoko stuff) and it looked like he was finally back to the Lennon of old. And then Chapman put a bullet in him. Just as he was singing about “starting over” and celebrating a new beginning and how excited he was about raising his child and growing old with his wife…boom: dead. Just like that.

That’s what happened to Enterprise. Just as the show found its groove and Star Trek looked to be back, it was gunned down tragically.

There are a few episodes (see page 2) that stand out, however. Setting aside the stellar fourth season, there are some episodes from the first—and much maligned—two seasons that offered the fools gold that the show—with Network support and better writers in the beginning—might have blossomed into a very good Star Trek series.