In January we looked at the brilliant comedy-slash-philosophical examination that is Groundhog Day. in February it was Sleepless in Seattle, easily one of the greatest “romantic-comedies” in history. In March we remembered the late-great Robin Williams and the endlessly-rewatchable comedic stylings of Mrs. Doubtfire. Last month we looked at The Fugitive, an adaptation that distills the basic premise of its TV show source material into a tight and thrilling two-hour mystery.

Speaking of adaptations, that’s not a word typically associated with Jurassic Park but technically the movie is adapted from the Michael Crichton novel. When reading the novel, however, it’s clear—whether Crichton realized it consciously or not—it was always destined for the big screen. Even his writing style was more like a long-form screenplay than a novel. There’s hardly any inner-monologuing or highly descriptive prose. It’s a very straight-forward, beat-by-beat story with a premise that had to be seen not just read. 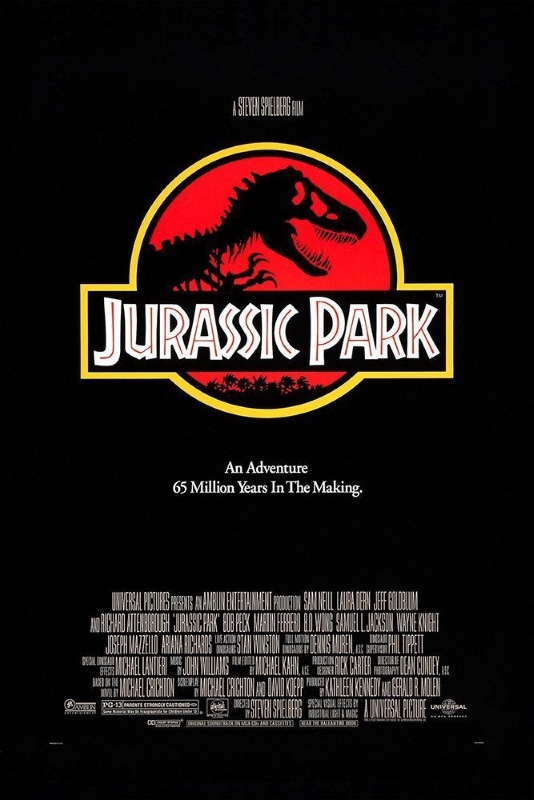 Crichton’s initial idea was about a grad student/scientist who genetically reverse-engineers a dinosaur into existence. He played around with what he could do with such a concept while working on his other project, E.R. (which was originally to be a movie but later became the acclaimed NBC drama). Steven Spielberg got wind of the book even before it was published and immediately moved to secure the rights. Ever the shrewd businessman, Crichton told his agent not to accept less than 1.5 million from whichever studio bought the rights, knowing that having Spielberg’s name attached meant it was guaranteed to be big.

Spielberg, however, had another movie he wanted to make first, the Holocaust-epic Schindler’s List. Universal was set to produce and they doubled-up by paying the high price for Jurassic Park as well. That’s an important detail to consider in the life of this movie; Universal’s parent company CEO, Sid Sheinberg, personally stepped in and asked Spielberg to direct Jurassic Park first (Spielberg was already about to start pre-production on Schindler’s List). Sheinberg had a hunch that the Spielberg might not be up for shooting a popcorn adventure movie right after such an emotionally-draining film. Spielberg would later agree with that hunch and thus, Jurassic Park was made.

Spielberg has mentioned two things that appealed to him and drew him to the project: The first was the opportunity to top Jaws by doing it “on land,” the second was the science-fiction side of the story, exploring how dinosaurs could conceivably (or at least semi-plausibly) be brought into a modern setting. Instead of using time travel or magic or some other fantastical scenario, the plot grounds itself with science and genetics. That might seem like a minor point, but it subconsciously adds an element of believability to the horror, suspending your disbelief and taking away that little voice in your head that might otherwise say “it’s not real because time travel isn’t real, etc.”

Crichton’s story and Spielberg’s handling of it lull you into things (besides a creepy creepy teaser in the opening minutes) with beautiful vistas, happy herbivore dinosaurs like brachiosauruses and triceratopses, before killing the power and turning loose the raptors and the T-Rex.

That might be one of the very best teasers ever put together. Breaking it down is breaking down the movie so let’s kill two birds with one stone…

The trailer begins with John Williams’ score. Cinema’s maestro proves once again that he has a way of tapping into a story and giving it a musical accompaniment that seems so perfect for it you can’t imagine any other score happening alongside it. What you see in the first forty-seconds is daylight, wonder, happy dinosaurs, Spielberg eyes, and just enough exposition to keep you moving through the spectacle. It’s like the slow click-click-click up a roller coaster. You know something crazy is coming over the hill, but you have to sit through the set-up first and just admire the views. 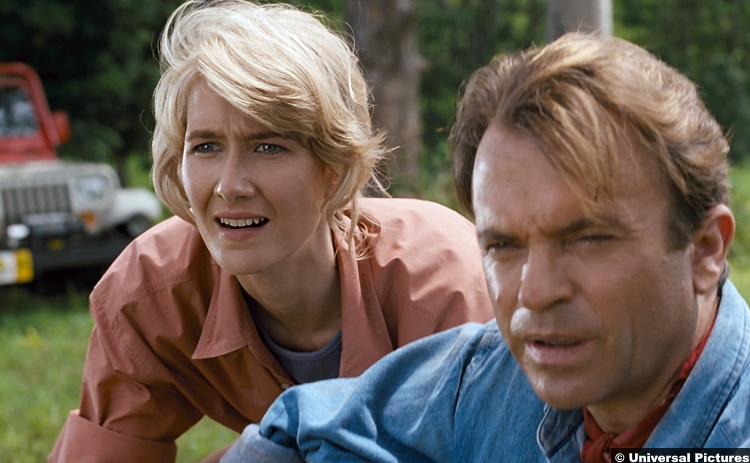 The movie does the same. There are enough wondrous images to keep you engaged, but most of the first half of the movie is devoted to click-click-clicking you up the roller coaster. The moment in the movie when things get crazy happens at the same point in the trailer: The power goes out with our main characters right in front of the T-Rex display, the glass of water ripples (one of cinema’s most iconic shots ever), and…mayhem ensues. 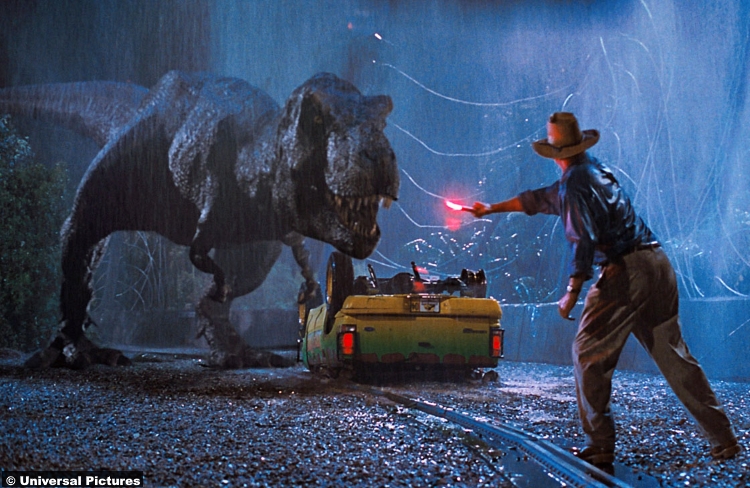 In the trailer the change happens so suddenly, William’s majestic score isn’t even finished when we see the water ripple. But once the announcer says “Universal Pictures presents…” we cut to the T-Rex foot imprinting in the mud and it’s “A Steven Spielberg film…” followed by a breakneck-speed montage of panic, tension, and—in the case of that T-Rex pupil dilating in the flashlight–abject horror.

Right after that scene is another classic moment: When the T-Rex is chasing the jeep and we get the “objects in mirror are closer than they appear” shot. It’s the kind of visual gag that a giddy, child-like Spielberg would have said “hey you know what’d be funny…” and then did it. A lesser director would have said “No that’s too cheesy; it ruins the tension of the moment.” But Spielberg understood what he was making: This isn’t just “Jaws with dinosaurs.” It’s a theme park thrill ride, and like all roller coasters, you have to be scared and exhilarated at the same time. Few movies have been able to strike that balance the way Jurassic Park did.

It’s almost impossible to pin down which Steven Spielberg movie is his best (not really though), but most who’ve seen them all will agree there is a clear “before-Schindler’s List” and “after-Schindler’s List” divide in his filmography. Sid Sheinberg was right to suggest that his Holocaust movie would change him, and though he certainly made countless more excellent movies since then, they’ve all been either a little more grown up, a little grittier or just a little less wondrous. The movie right after Schindler’s List was The Lost World (the follow-up to Jurassic Park), a mediocre movie that might have shown just how important it was that he did Jurassic Park first.

Jurassic Park is the last in a special era of Spielberg movies, populated by films like Jaws, Raiders of the Lost Ark and E.T. It might not be his most personal work like E.T., or his most “perfect from beginning to end” film like Raiders was. It may not have been made with the same hunger he had when making Jaws. What Jurassic Park is, however, is a cinematic roller coaster; relentless, exhilarating, thrilling, terrifying, supremely fun, and, of course, still awesome…twenty-five years later.