While 1984 failed to reach the lofty heights of 1982 as a great year in cinema, it still managed to churn out some of the best hits (cult or otherwise) of the past half-century. Just to name a few, 1984 gave us The Terminator, Karate Kid, Gremlins, A Nightmare on Elm Street, The NeverEnding Story, The Temple of Doom, Beverly Hills Cop, Spinal Tap, and so many more. It was a stacked year and a big one for franchise starters. Of the eight just mentioned, only two were stand-alone movies. One was a sequel, and the rest all produced follow-up movies.

There must always be a champion, however, and for 1984 there was one hit that rose above all the rest. One movie reached a pinnacle of perfection that few others have been able to touch. Whether you’re judging it as a sci-fi movie, a comedy film, a summer blockbuster, or anything in between, this movie can be summarized in one word: perfection.

Three years ago, I wrote this:

The original Ghostbusters is the Raiders of the Lost Ark of the sci-fi comedy genre. It’s flawless from head to toe. The premise is clever, the actors are on point, the screenplay is tight, the humor—particularly the improv (especially by Bill Murray who, it seems, ad-libbed 90% of his dialogue)—is timeless, and the special effects, which were good in 1984, have a charming, silly quality 32 years later.

Ghostbusters doesn’t need a remake. It needs a rewatch.

So that’s what I did; I rewatched the original Ghostbusters, and let me tell you… 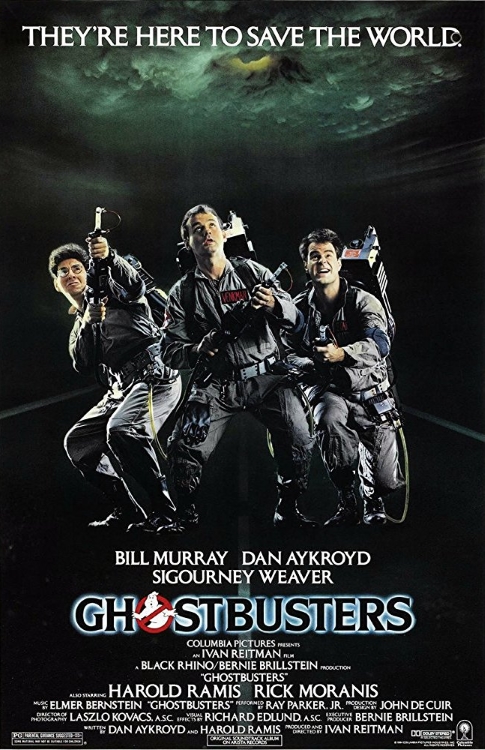 There are so many things working for this movie it’s hard not to just list them all in a row. Here are a few things that make the movie great…

1. There is obvious care put into the “mythology.”

Although to talk to Dan Aykroyd, the “mythology” would be better termed “science.” Aykroyd is a die-hard student of paranormal research and poured a lot of his knowledge into the movie. Even though the surface-level of the film takes nothing seriously there’s an underlying “respect” for the subject matter that gives the movie more depth than most other genre films. 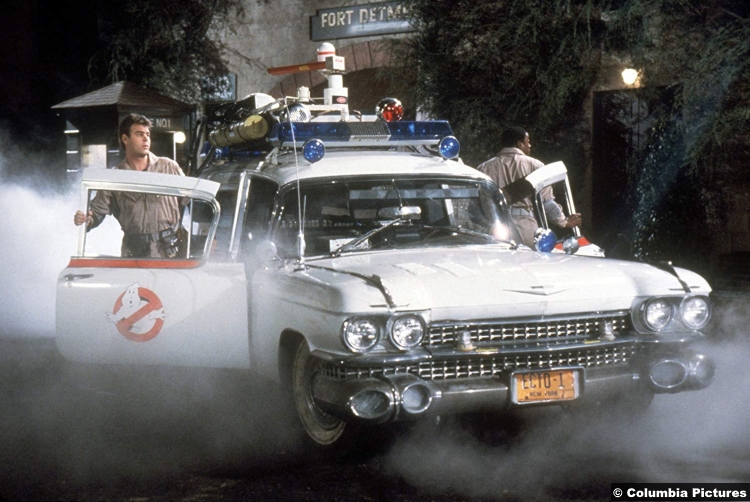 2. The four-man group is precisely balanced.

Egon is the socially-awkward brains of the group. Ray is the eager beaver. Venkman is the unflappable wise-cracker. Winston is the audience surrogate every-man. There’s no overlap, no unnecessary parts, no over-emphasis on one role over another; everyone has their part to play and each plays it to a tee. Everyone also gets at least one side-splitting line or moment every ten minutes or so. 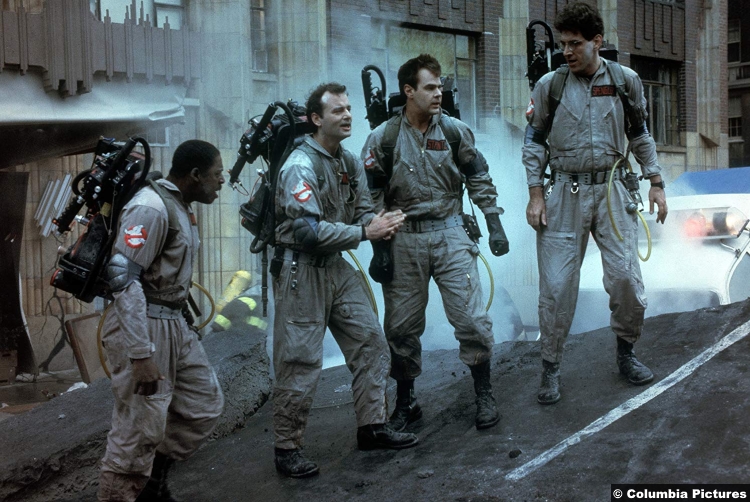 At 105 minutes, Ghostbusters moves breezily. There’s a reason why it flows so well (which we’ll get to at the bottom of the list) but in terms of pacing, you can’t beat it. The action moments are punctuated by comedy, and the down-time segments have a healthy mixture of paranormal weirdness (and sometimes horror) and lighthearted nonsense. Nevertheless, there’s not a second of film that could have been excised and there’s not a moment to be found where you will be tempted to check your watch.

The screenplay by Harold Ramis and Dan Aykroyd (Egon and Ray, respectively) deserves a ton of credit for introducing the rules of the universe, explaining them, turning them on their head while still remaining consistent, and setting up throw-away lines and gags to be important moments in the climax. It’s a fantastic script, but the script is only half the magic; the other half is the freedom director Ivan Reitman gave to the cast to riff and play around with their lines. Bill Murray might not have even read the screenplay, but every word out of his mouth is solid gold. 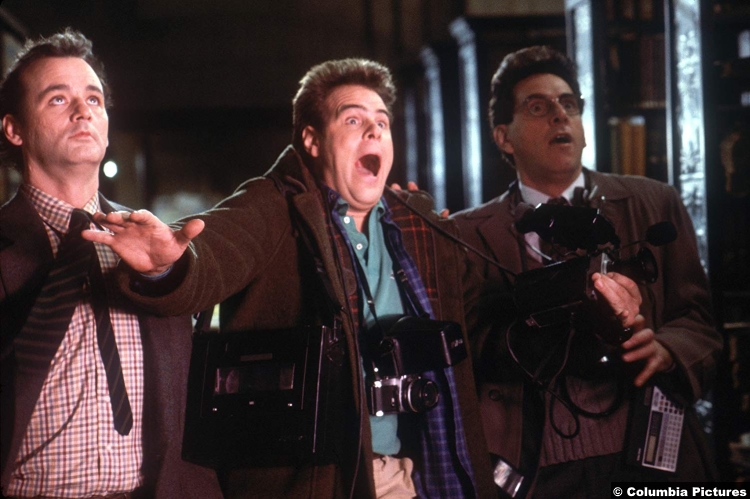 5. The “escalation of insanity” makes the movie accessible to a variety of fans.

The movie begins with a ghost in a library turning into a spooky old wretch. It’s effective but small in scale. The movie ends with a skyscraper-sized marshmallow man having been summoned by an inter-dimensional demon that entered our world through a refrigerator. You simply can’t go from point-A to point-Z without a lot of incremental steps in between.

The true magic of Ghostbusters is how it ratchets up the insanity a little at a time throughout the movie. It desensitizes you, little by little, so that by the climax, you’re not only not impressed by an ordinary ghost (by that point hundreds of ghosts are running amok throughout New York), you’re actively wanting bigger and crazier. A casual or first-time viewer might find the idea of the Stay Puft Marshmallow Man absurd, but if they start from the beginning and go along for the ride, they’ll completely buy-in when the big guy lumbers onto the screen.

That’s the true secret sauce of the movie. 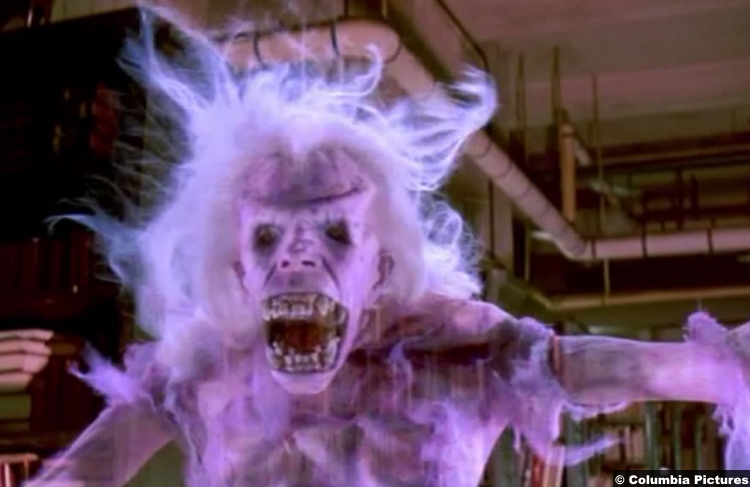 A few years after Ghostbusters, Columbia Pictures released Ghostbusters II, a movie that felt like exactly what it was: A sequel made solely for the purpose of making a sequel. There was nothing new to say and it showed: The jokes were either tired or forced, lacking the freshness and spark of the original. I still enjoy it but only because I love the characters so much and am just happy to see them interact, but there’s no denying it’s a step down.

After several aborted attempts at a part three, Sony released the reboot in 2016. After that crashed and burned, the surviving members of the original have announced their own attempts at reviving the franchise. I have low hopes, but no matter what happens nothing will change what the original was.

Thirty-five years ago Ghostbusters was the perfect sci-fi comedy summer blockbuster. Today, thirty-five years later, it remains the gold standard. If it’s been a hot minute since you last saw it, remedy that this summer.

Rewatch Ghostbusters, and laugh just as hard today as you did thirty-five years ago.