Where have you gone, Rick Moranis?

Thirty years ago this summer, a quirky little high concept sci-fi movie debuted in theaters, and while it didn’t dominate the way Tim Burton’s Batman did (which released on the same day), Honey I Shrunk The Kids was nevertheless a humongous success. The film raked in over 200mm dollars, good for fifth place in the 1989 box office chart. It fell short of Batman, Indiana Jones & The Last Crusade, Lethal Weapon 2 and, bizarrely, Look Who’s Talking, but managed to beat expected heavyweights like Back to the Future Part II and Ghostbusters II.

The movie, if you’ve never had the privilege of seeing it, is about a derpy scientist and inventor named Wayne who develops a shrinking-device that, well, you know: It shrinks stuff. This isn’t hard sci-fi here. As a result of shenanigans, Wayne’s kids (and the neighbor’s kids) get blasted down to the size of ants, and have to navigate the dangers of the front yard, contending with bees, scorpions, and a lawnmower. 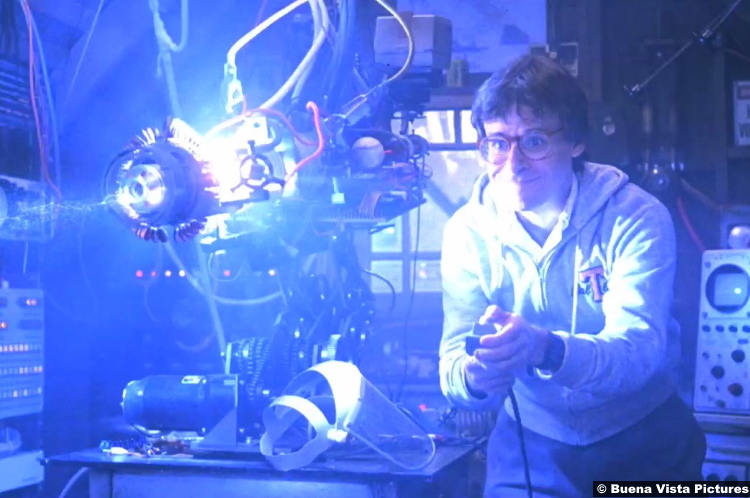 As a child the movie was wonderful, mostly because the special effects were of the pre-computer age, giving everything a tactile and authentic feel. The giant blades of grass, insects, and oatmeal cookies were all practically made, and thus all felt real, and the journey the kids took through their adventure had me on the edge of my seat. On the other hand, whenever director Joe Johnston cut away from the kids to the action featuring Wayne I tended to grow bored.

Now that I’m older I have come to appreciate those scenes, thanks in large part to the charm and subtle humor of Rick Moranis.

Moranis made his mark in show business, first as part of SCTV (the Toronto-based, Canadian version of Saturday Night Live) and its offshoot film Strange Brew, and then later via a string of successful Hollywood comedies. Between 1984-1989, Rick Moranis was one of the most reliable and funniest comedians working in the industry. He did Ghostbusters in 1984, turning the very small part of Louis Tully into a show-stealer. As it became the second-biggest movie of the year, the appeal of its entire cast boomed. Moranis followed the movie up with Little Shop of Horrors in 1986, taking the lead in Frank Oz’ musical-horror film. Though the movie failed to generate a big success, it quickly turned into a cult classic still beloved by many today. 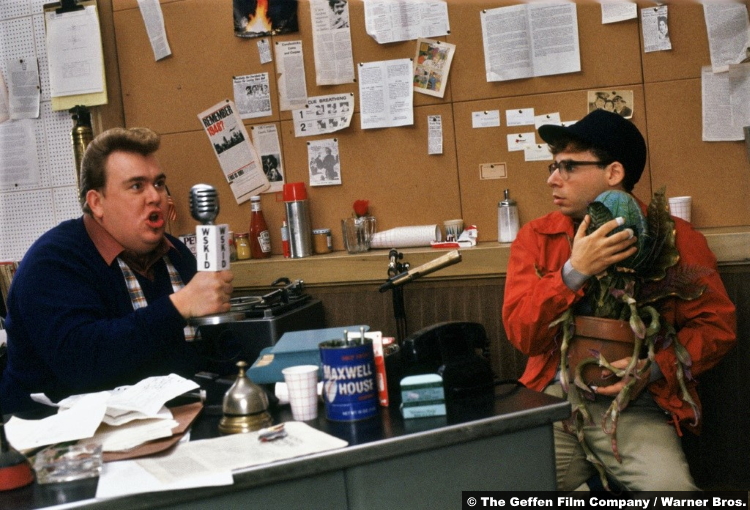 A year later, Moranis was in Mel Brooks’ Spaceballs, assuming the role of Darth Vader knockoff, Dark Helmet. By this point, Moranis had perfected the character of a goofy weakling who made you laugh with his every misfortune. Spaceballs was barely a hit upon release (like Little Shop of Horrors, it’s gone on to become beloved) but it was Mel Brooks’ biggest earner since the 1974 one-two punch of Young Frankenstein and Blazing Saddles. Nevertheless, after Spaceballs, Rick Moranis disappeared for three years before returning to Ghostbusters II in mid-June, and Honey I Shrunk the Kids a week later. 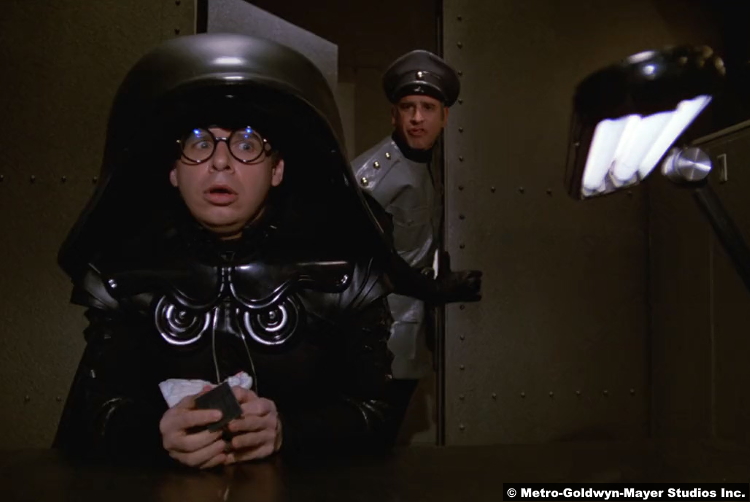 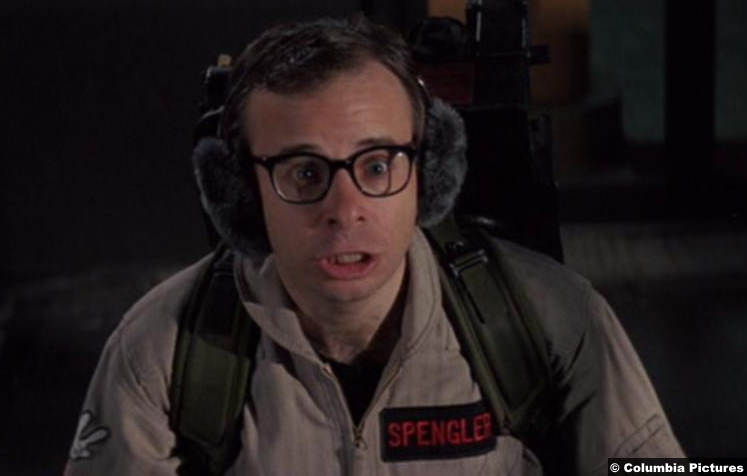 Honey I Shrunk the Kids was Moranis’ eleventh feature film in six years. In the thirty years since, he has filmed a total of eight theatrical appearances, with his last notable roles coming in 1994: The Flintstones and Little Giants (let’s not speak of 1994’s Big Bully). His star never dimmed in the ’80s, his flops were never career ruining. He was never at the center of any scandal, nor was he ever considered challenging to work with. By all accounts, Rick Moranis was a stand-up guy, a genuine talent, and moderately bankable box office star.

Where did he go?

In 2005 he gave an interview with USAToday…

In the last few years I’ve been offered a number of parts in movies, and I’ve just turned them down. I don’t know whether I’ll go back to it or not. I’ve been doing a lot of writing and a lot of parenting…

Unmentioned in that quote is the reason why he’s a single parent. Moranis lost his wife to cancer in 1991 and after a few years trying to juggle fatherhood with actorhood, he decided something had to go, so he (mostly) walked away from acting. A few years ago he spoke on a podcast on the subject, saying…

Stuff happens to people everyday and they make adjustments in their lives for all kinds of reasons. And there was nothing unusual about what happened or what I did. I think the reason people were intrigued about the decisions I was making, and sometimes seem to have almost admiration for it, had less to do with the fact that I was doing what I was doing and more to do with what they thought I was walking away from—as if what I was walking away from had far greater value than anything else might.

The decision in my case to become a stay at home dad, which people do all the time, I guess wouldn’t have meant much to people if I had had a very simple kind of “make-a-living” existence and decided, “You know what? I need to spend more time at home. I’m not going to do that. I’m going to do this part time and then work out of my house to do this and this and this.”

But because I came from celebrity and fame and what was a peak of a career, that was intriguing to people and to me it wasn’t that. It wasn’t anything to do with that. It was just work and it was time to make an adjustment…

I didn’t walk away from [creativity], I applied all my creativity to my home life, to my kids, to my family.  I was the same person; I didn’t change, I just shifted my focus.

And even though my saying it’s wonderful is partially what he was criticizing, I would say it’s wonderful if anyone—be it a famous actor or a 9-to-5 clerk at a bowling alley—decided they needed to re-prioritize their family over their work. Moranis went on to say…

I was trying to recreate a lot of the joy I experienced as a kid… [I] kind of decided to follow the adage of “90% of the success is showing up or being there” and I found that to be true.  Just being there was the best thing I could do.  That’s what I experienced with my mother at home all the time and so when my kids came home there was music and there were lights on there were great smells coming out of the kitchen and it was just always a joyous place to be and that’s what I wanted, what I wanted to create.

I admire that tremendously, but at the same time, while he might not miss it, as a fan of almost all things ’80s, I miss him. His hard-luck, aw-shucks, “slightly less than everyman” personas were some of the best parts of that decade’s film repertoire. His kids are older now and if he wanted to return to acting full time, I have no doubt he could work in today’s environment as a character-actor doing small or supporting roles. According to the man himself, those were the parts he preferred anyway…

On the last couple of movies I made—big-budget Hollywood movies—I really missed being able to create my own material. In the early movies I did, I was brought in to basically rewrite my stuff, whether it was Ghostbusters or Spaceballs. By the time I got to the point where I was “starring” in movies, and I had executives telling me what lines to say, that wasn’t for me. I’m really not an actor. I’m a guy who comes out of comedy, and my impetus was always to rewrite the line to make it funnier, not to try to make somebody’s precious words work.

It’s been a quarter-century since Rick Moranis was a Hollywood man. As happy as I am to know his heart is golden and his family is taken care of, a little part of me hopes to see him on the big screen one more time. Until then I’ll just have to re-watch Honey I Shrunk The Kids with my children for the 78th time. 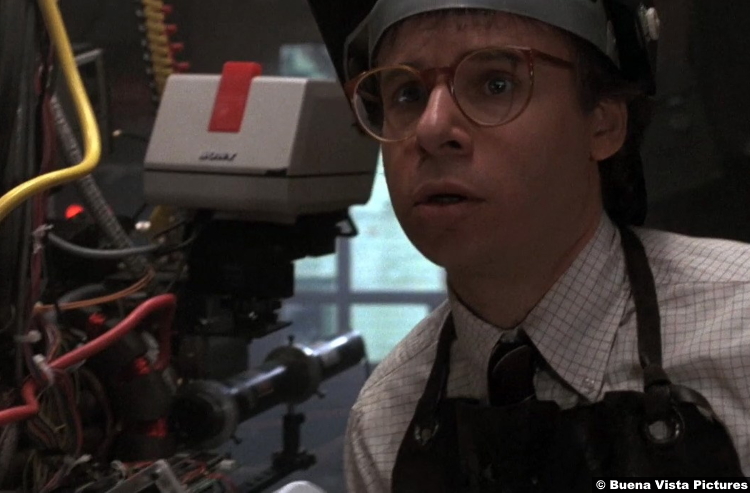 Happy thirtieth anniversary to that great kids film, and the great actor at the center of it.