“Ghosts” looks like a 24 homage from the cold open. Hour 1 spans to hour 40+ as a horde of walkers bear down on Alexandria and our tired heroes are forced to express some truths. When the post-apocalypse makes alcohol-fueled truth bombs unlikely, you use sleep deprivation to achieve the same effect. It’s a clever workaround to get characters talking. The third episode of the tenth season is surprisingly light on substance for the heavy title it carries. What it does deliver on, however, sets up some exciting possibilities about how next week will finally escalate the narrative.

Paranoia sits at the heart of the episode, but its presence is rather stale in a world gone numb to its own violence. It’s hard to find any of the caution and exhausted frustration the characters feel as something unexpected or soon-to-be resolved. We’ve watched them live in this state for ten seasons now. Without any immediate personal stakes, the fear-fueled stories appear less like exhausted confessions and confrontations and more a dose of overdue exposition. The resolution offered, especially in the Negan/Aaron plotline, is shallow and arbitrary. The episode lacks a clear flow. Given how well episode two was crafted and the clever use of time across the season so far, episode three is rather disappointing.

Once again, Melissa McBride saves an episode. I’m not sure if I’m just overly in love with her or her plotline remains the only one the writers are still trying to be creative with, but Carol is struggling to stay ashore. Her supply of speed is running out and sleeplessness is getting the best of her. She attempts to assassinate Alpha, she hallucinates a whole conversation with Daryl, and manages to escape from a rabbit snare to kill a whisperer and a whole gym full of zombies. For how little happens elsewhere, Carol’s narrative keeps the episode moving forward. Daryl plays more an extension of her moral conscience than foil. He’s Jiminy Cricket with a heavy drawl and excellent skills as a marksman. 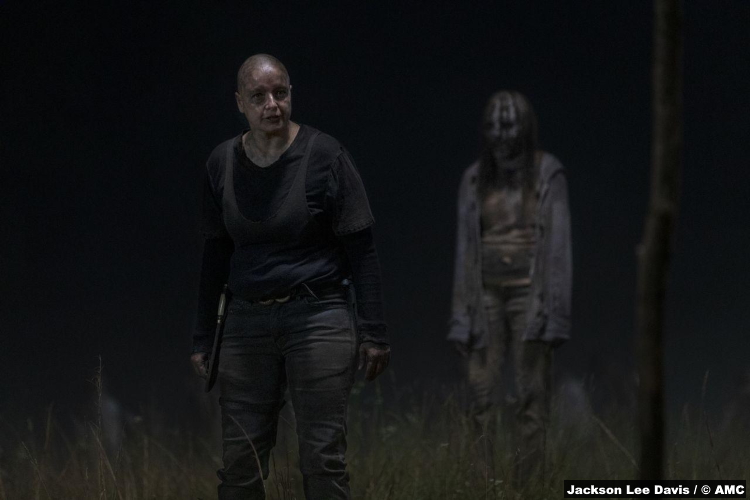 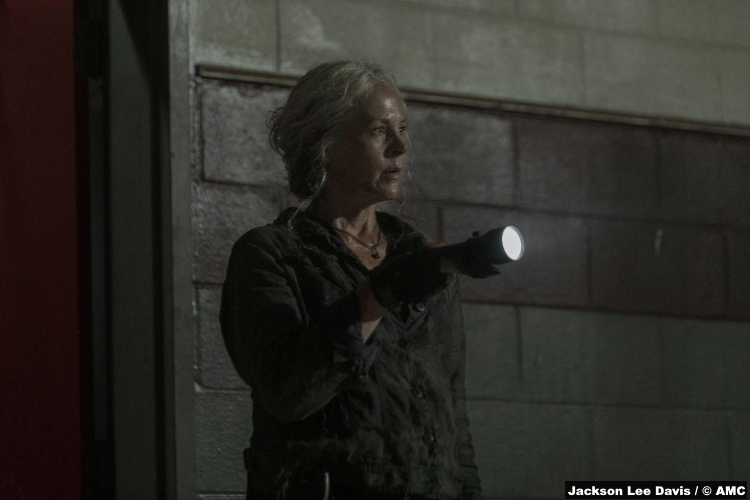 For the many things “Ghosts” falls short on, and there are many, it does manage to create an eerieness that’s hard to shake. The flow of time is stuttered and uncomfortable, punctuated by a kitchen timer’s buzzing. The weighty, fractured flow of the episode works well for some of its plots, but makes it hard to take everything else seriously. Samantha Morton continues to impress even if Alpha’s scenes fail to bring half as much terror as they’re supposed to. In the end, I think that’s really where this episode could have learned from its predecessor. When the B plot is the only one actually moving forward, there’s a problem.

This episode was supposed to be about the consequences of crossing the borders. The city gets a bit pinched in and there ends that story. The entirety of the second episode devoted to The Whisperer’s background and they have maybe five minutes on screen? They’re barely mentioned directly. The monsters who walk among the dead that we’re supposed to fear flex their power for a few frames, flash some guns, and move an unimpressive fence of tall sticks.

Aaron and Neegan’s conversation around Eric’s death felt out of place. Gabriel is consistently making some poor leadership choices and I don’t get why no one else seems to have figured that out. Forcing the two together gave us mace-fist-attachment which makes Aaron all the more dreamy, but the story falls flat. The only sort of ‘resolution’ comes from Negan saving the blinded Aaron instead of letting him die after the two exchange some trite barbs about masculinity and Negan barely stops short of “No True American”. If we’re supposed to find him sympathetic, we don’t. If we’re supposed to suspect Negan, we already do. He’s the character the heroes should just finish off and never do. Unless there’s going to be a twist Aaron/Negan romance plot, I really just don’t get this whole scene. 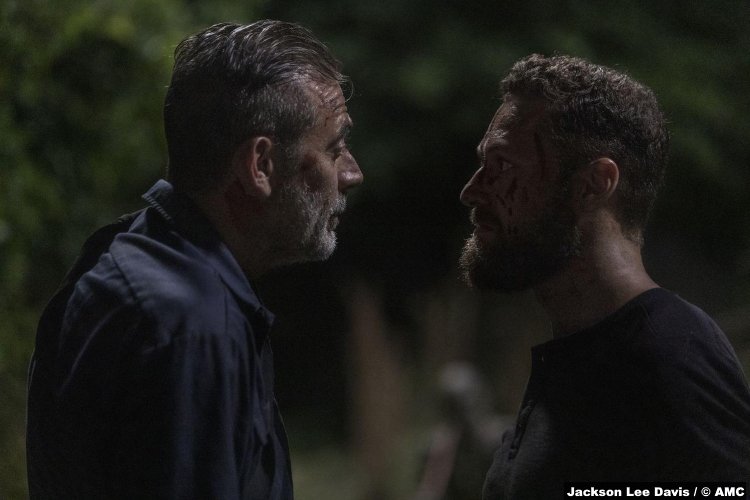 The rest of the episode’s plots are equally bad. Michonne is basically just tired mom the whole time. Eugene has a moment of self-awareness after Rosita confirms he is squarely in the friendzone. It’s uncomfortable to watch and even more uncomfortable when you consider he’s supposed to be the object of our sympathy, not annoyance. Lydia exists almost entirely to confirm the attacking horde isn’t The Whisperers’ doing. Siddiq and Dante touch on PTSD by drinking moonshine. It’s not great.

Of the three episodes so far, “Ghosts” feels more like a time-killer than anything else. The majority of the episode could have been cut in favor of telling a more cohesive story. There’s plenty of eeriness and past pain to fill an episode, but do we need more of that? How much of the unresolved trauma do we need to explore at once? If the show is going to try and have “the more you know” moments, stick to one an episode. Especially when the moral is something we already know.

Carol is deeply haunted. Eugene is oblivious. Aaron is angry. Michonne is tired. The show has too many characters.

Still, Carol’s murder of a Whisperer who leads her into the trap and the tightening of the borders continue to hint at conflict. The writers are trying to make The Whisperers’ horde frightening. They haven’t had much success. I hope next week finally gives us some plot progression. There are already too many loose threads:

Do we really need more? Would it kill the show to give us a conclusion before introducing half a dozen more threads? The Walking Dead is infamous for leaving threads unwoven but three episodes of tattered edges is giving the tenth season a rough start. Delivering on a tight story with a clear open and close would be a much-needed change of pace and next week’s teasers keep hinting we might finally get it.

4/10 – While there are some eerie moments worthy of the episode’s title, “Ghosts” is a lazy replica of the show’s formula without any body to it. The secondary and tertiary plots neither spring from nor feed into the A plot and the lack of coherence hurts the discomfort we’re supposed to feel. What should be tense and overwhelming ends up boring and predictable.