The Walking Dead S10E02 Review: We Are the End of the World – Why are the Whisperers so desperate to prove themselves?

“We Are The End of The World” sets out to explain the origin of The Whisperers and their pro-apocalypse philosophy. It did well enough on the first part, giving us a more complex and strangely human relationship between Alpha and Beta, but fell short on any sort of explanation. The episode is interspersed with conflicts over the true death of one’s humanity, Empire Strikes Back homages, and some curiously tame fight scenes. The second episode of the season echoes the first, more establishing shots than giving any sort of plot progression. At least this time, it’s for a group of characters desperately in need of some background exposition.

The writers use long flashbacks cut with the events leading up to Alpha and Carol’s post-soviet crash clash. Seven years earlier, Alpha and Lydia escape to an abandoned mental hospital where a masked man and his machete give them a night’s refuge. In the present, Alpha and Beta continue to grow their horde while “the sisters” struggle to cast off what remains of their humanity. The episode ends undecided: are The Whisperers the product of The End or were they always this way and The End simply freed them. 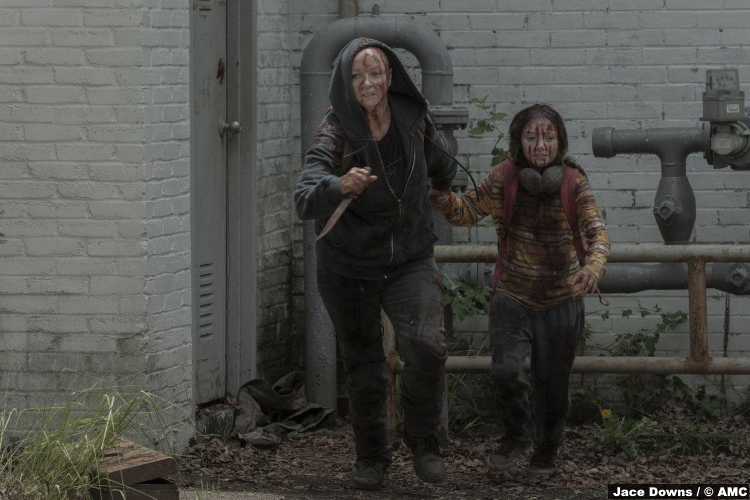 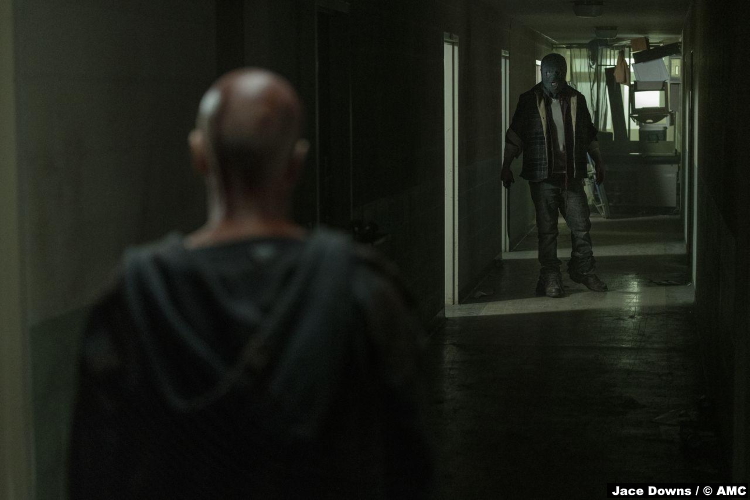 Freedom is a curious theme present throughout the episode. The Whisperers’ philosophy, rooted in the freedom of death, sounds more like a perversion of the Jedi Code than any unique take on the apocalypse. “The dead have no names” neatly summarizes what takes the episode nearly half its run-time to get to. Alpha sees the wandering hordes of mindless zombies as truly liberated, bound only by their hunger. “They are free” is delivered with terrifying emotion from Samantha Morton, but does little to explain why The Whisperers carry on or what exactly their cause is.

The writers are very obviously trying to establish this season as the fight between the birth of a new civilization in a world freed from its fetters and those who seek “clarity within the chaos”. Within each faction there are dissidents: Beta is more violent and seeks active destruction whereas Alpha is more concerned with the philosophy and personal ‘attachment’ she has to death; the survivors are fractured and spent the better part of the first episode bickering when not slicing zombie heads clean open. Unfortunately, the episode failed to give The Whisperers any kind of convincing ideology. Once again, the counterpoint has nothing but force on its side and the outcome is already evident. 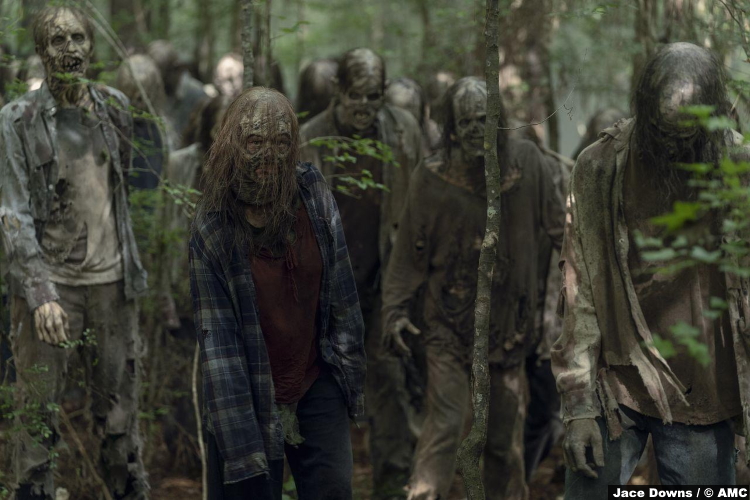 Plenty of works have tackled the theme of man vs nature. The follies of civilization and its degradation of humanity has always been a meaty conversation in philosophy. The Classical Greeks believed they were the fallen remnants of a golden age. Rousseau spent plenty of money on ink celebrating the freedom and glory of the naked, unfenced man. Christianity itself celebrates the downfall of kings and their crowns. Hell is organized by political rank; Heaven is mindless ecstasy. With much of its history devoted to showing what kind of depravity hides in humans and how, given the chance, the weaker among us would fall into that darkness, The Walking Dead’s turn toward bigger questions about civilization is refreshing. Their take, at least so far, remains lukewarm.

The Whisperers are mindlessly violent and their ideology is subverted any time they show even the slightest bit of emotion. Beta is, despite the pack’s worshiping of Alpha, the one closest to that ideal. Alpha still mourns the loss of Lydia, whom the pack believes she killed, and Gamma is barely able to contain herself. The gender take on this episode deserves its own article, but Alpha’s hypocrisy only makes the episode’s take on this primordial question all the more tepid. Freedom from emotion is freedom itself, but why does that necessitate violence? Why does Beta feel the need to destroy the “fantasy” he fears tempts the pack? Why are the Whisperers so desperate to prove themselves?

Because they’re the bad guys and their philosophy is supposed to be wrong. 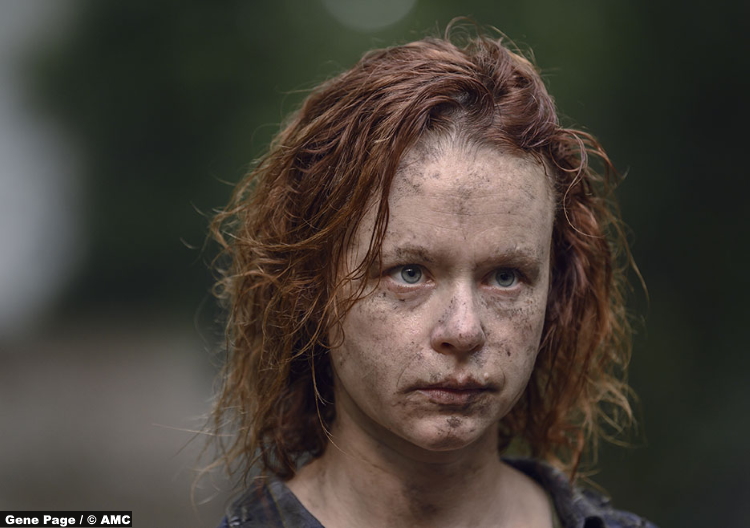 The Walking Dead has yet to shake its “grey area” problem. Any time the show attempts to present a social structure not desperate to replicate moderate America, they can’t help but cast things as black and white. “It’s not perfect, but it’s the best we’ve got!” can only carry the imagination for so many seasons. I don’t imagine most viewers tune in for heavy meditations on the worthiness of organized society, but an episode dedicated entirely to explaining why the bad guys are the way they are should at least give the antagonists something more than “mentally ill” and “hypocrites” if we’re to take the squabbling and in-fighting amongst the survivors as anything more than cheap setup for drama now that Walkers are essentially props.

What the episode excels at, and what makes it worth watching, is Alpha’s complex relationship with Lydia. It doesn’t fit well with The Whisperers nor their conflict with the survivor’s attempt at rebuilding society, but it does explain better some of last season and sets up what will surely be at the center of events to come. The use of gore is surprisingly effective. A walker taking a chunk out of a screaming woman’s leg in the cold open is fairly mild compared to the organ harvesting we see later. Beta’s origin story, neatly summarized as “Michael Meyers but with zombies,” is fun, even if not especially unique or compelling. I hope we see more of him, his past, and his reasons for believing in Alpha despite her remaining attachment to Lydia and her anointing of Gamma.

“We’re all monsters now” lacks the depth the show is convinced it holds. I had hoped for something bigger to chew on, but aside from a few great lines and Morton’s incredibly eerie performance, The Whisperers remain starved. Next week’s teaser promises the story will move forward and Alpha will demonstrate just how monstrous she really is. As someone who hoped the show would move away from superheroes-lite toward a more thoughtful reflection on the world it’s created, “We Are The End of the World” was a disappointment. So far, The Whisperers are just the most honest and open version of the same antagonist setup across the series. They’re creepy and there is an undeniable cool factor to their scenes, but without something heavier to them, season 10 is shaping up to be a lot more of the same.

4/10 – Depravity as a philosophy isn’t half as bold as the show wants us to believe. Gore and great acting can carry an audience, but it doesn’t give us anything we haven’t seen before.