REVIEW: Dumbo makes me sad for all the wrong reasons

Growing up in the 80s and early 90s, Tim Burton was my favorite director. I think, even as a child I recognized Steven Spielberg was “better” but I connected more with Burton’s movies. Other than E.T. I never felt like Steven Spielberg was making a movie that really expressed anything about himself. They were always wondrous fairy tales or escapist films but they had no hooks to dig into me.

Tim Burton, on the other hand was, once upon a time, the maker of these weird, original ideas. He had a unique visual style and off-kilter characters. His movies were like macabre fantasies about characters who, like him, we odd ducks in a world full of normals. His movies came from somewhere and as such they spoke to me (someone who also always felt like an odd duck in a world full of normies). Burton’s movies basically defined my childhood. If you have forgotten just how magical his first string of films was, these are his first eight films: Pee Wee’s Big Adventure, Beetlejuice, Batman, Edward Scissorhands, Batman Returns, The Nightmare Before Christmas (not directed but everyone concedes the movie is basically his), Ed Wood, Mars Attacks, Sleepy Hollow.

Now? After thirty-five years of directing big movies, he seems to have lost his spark. Not only that but somewhere along the way he seems to have become incapable of making even a competent film. 2014’s Big Eyes teased being a turning point moment for the director, as did 2007’s Sweeney Todd, both hinting that he might grow into something different from what he’s been over the past twenty years (a maker of stale, Burtonesque stereotypes). Instead, that movie is looking more like an anomaly.

Which brings us to Dumbo. 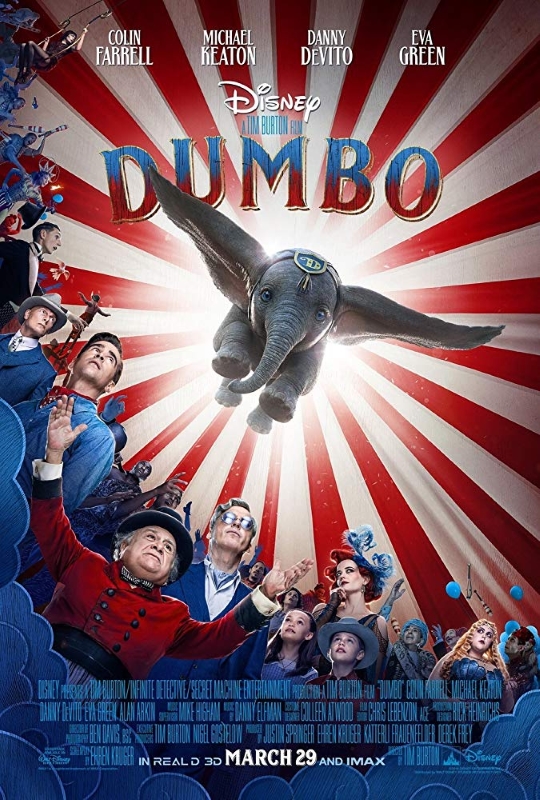 This movie is just a mess. Visually it’s good, not great but good enough. There are little moments here and there when it feels like the old Tim Burton was at the helm. Those moments are rare, however, and the rest of the time I watched a pale imitation of the man who directed my childhood.

Probably the saddest thing about it is that it highlights just how far Burton has gotten away from what made his films special. Ironically enough, it’s his ability to direct actors.

Burton is an admittedly bad connector with people. Nevertheless, in his heyday he made that weakness a virtue, creating outcast characters, oddballs, or just people who, like him, had trouble connecting with people. This is the man who gave us Edward Scissorhands, who brought Pee Wee Herman to life better than anyone else, who made Ed Wood a hero of every wannabe bad director.

Say what you want about his take on Batman from a comics-purist standpoint, no one can deny that Burton didn’t find something in the story of a man so obsessed with vengeance that he dresses like a bat to beat up criminals. Batman Returns was even more misunderstood when it released, but now it’s viewed as Burton being Burton, telling the story of three misfits who don’t belong anywhere and who seem doomed to torment themselves and everyone around them until death.

Ichabod Crane was the same way; in Sleepy Hollow, he’s a scientist in an era that shunned modern technology. Again, the outcast and the misunderstood was the hero. Whenever Burton focused on that, built his movies around that, and kept his stories restrained in exploring those ideas, he soared. Whenever he got weird for the sake of it, his movies flat-lined. That started right around the time Planet of the Apes nearly killed him.

So blame Fox I guess.

The point is, through all those quirky and oddball movies, his quirky and oddball characters were fully realized and well-directed. The director who claims to struggle dealing with people used to direct Oscar-worthy performances (Martin Landau even won the Oscar for his role in Ed Wood). In Dumbo he doesn’t seem to know what to do to get a good performance out of anyone.

Whenever the real people are off screen the movie soars (no pun intended). Case in point is the Mad Elephant/Baby of Mine scene. It’s genuinely moving because it features two non-human creatures simply emoting over a touching song. The staging, timing, editing, everything works. But once the people start talking it’s like they’re high schoolers doing a bad play. 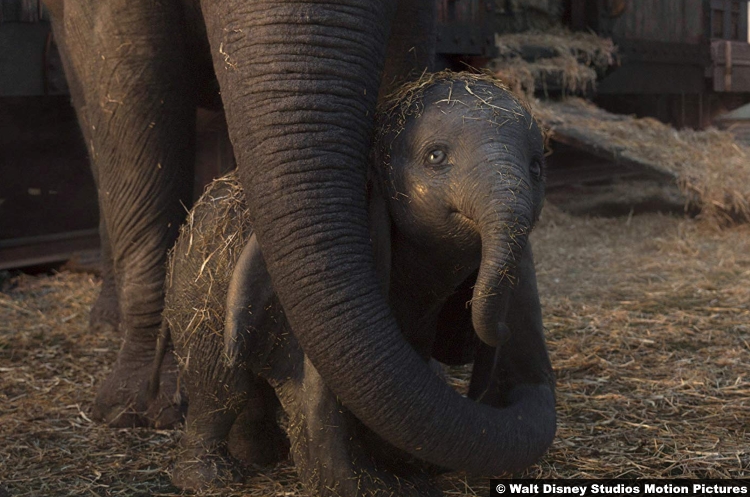 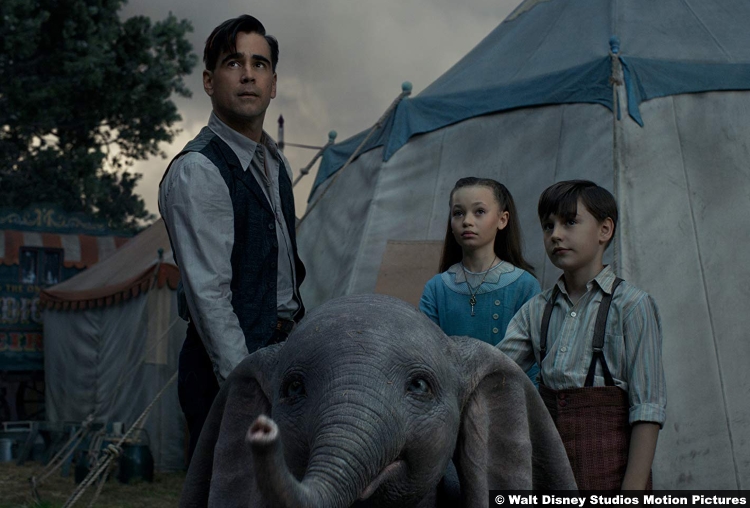 To be fair, the screenplay does the director no favors; it is egregiously bad, with some of the worst, most cliched lines ever in a major movie. Tim didn’t write the movie but his job is to direct the actors to make the most of the writing. Instead, holy cow these actors are horrid. Danny DeVito sounds like he’s reading his lines off of cue cards on an episode of SNL. There’s no reality to anything he says. The words feel detached from the world, like he’s not genuinely reacting to anything but instead is just saying his words without any context or understanding of the scene. It reminds me of the Star Wars prequels. 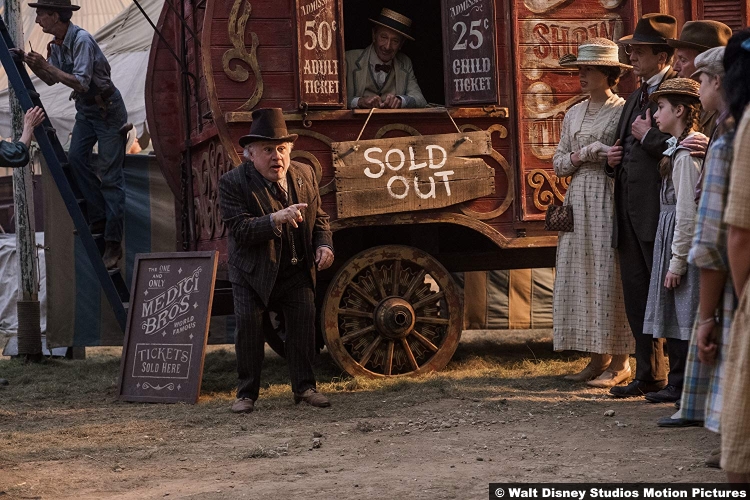 That’s not to say there aren’t a few moments that almost work: Michael Keaton is the only one giving anything resembling a performance. Dude is over-acting his head off and it pays off in spades. In a better movie it might be distracting but in a dull, stilted, and mostly lifeless affair as this, over-acting is an oasis. He’s the only one who seems to be enjoying himself. In fact, he acts like he’s in a different movie entirely and doesn’t realize he’s supposed to be sleepwalking. 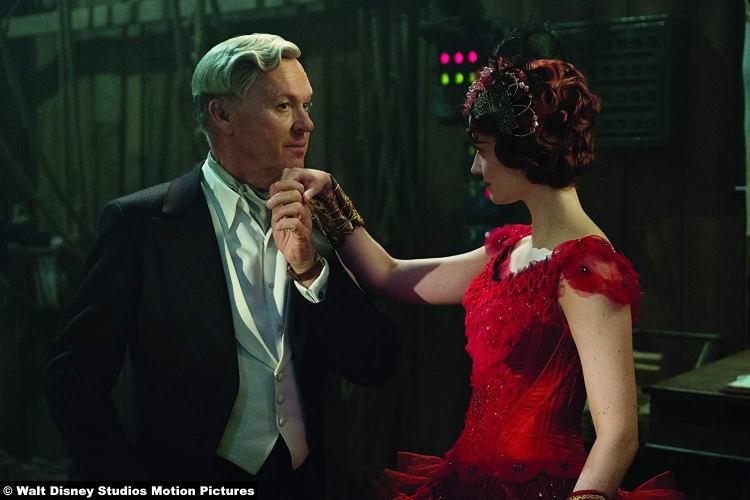 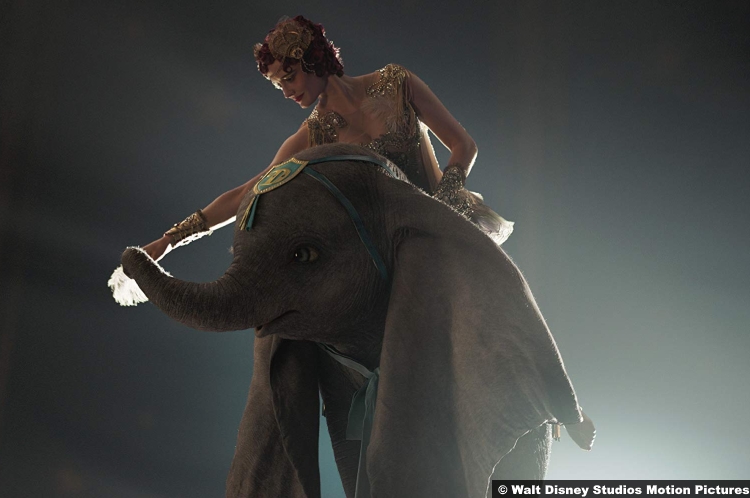 The other bright spot came to me after about the fourth or fifth time Dumbo took flight. I watched him sail around the circus tent and I felt a flutter in my heart, the same feeling I got when Edward made the ice sculpture, or when Batman broke through the glass ceiling in the Art Gallery, or when the opening refrains of “Day-O” played at the beginning of Beetlejuice. That old feeling was back for a brief moment…and that’s when I realized the feeling wasn’t because of what I was seeing, because what I was seeing was the same CG-elephant fly in a circle that I’d already seen three or four times. No, the feeling was because of what I was hearing: Danny Elfman’s score, the chorus of “aaaahhh’s” mixed with strings that define his thirty-five-year relationship with Tim Burton.

Maybe it’s not Tim Burton that made my childhood; maybe it’s Danny Elfman.

I have been looking forward to this movie for a year. Dumbo always seemed like the perfect movie for the old Tim Burton. It’s about an oddball outcast, it has has a bizarre setting, and there’s plenty of opportunity to mix quirky humor and touching drama. I wish Tim had directed this in 1994 or 1989, or even 1999. But in 2019…he just doesn’t have the same spark to make it work.

I would have liked to have seen Burton direct an animated remake of Dumbo, using the story from the 1941 movie as its template, talking animals and all. Maybe something akin to Frankenweenie in art-style. This is what we got, however, and while I wish Burton had a better story to work with, even with the poor screenplay he had, he did little to improve it and certainly far less than his younger self would have. This was the movie where I finally realized the director of my childhood had given up.

And that makes me very sad.

4/10 – Dumbo’s music is on point, some of the visuals work, but the people let the production down, and the direction failed to stir anything out of them.