Happy 30th to the inimitable BEETLEJUICE

Fairly early in the movie, Adam and Barbara stumble upon a mysterious instruction manual that was left for them by what I can only assume was the ultimate cosmic force of this movie’s universe. During that moment, ominous music kicks in as Adam reads the title:

Handbook for the Recently Diseased.

The music stops, Barbara interjects a word to correct his misreading: “deceased” and Adam looks down at the book to re-read the word, this time correctly. It’s a simple gag, but Danny Elfman’s score picks back up for the punchline, echoing the ominous tone only now in a wink-and-nod parody sort of way.

That’s the magic of Beetlejuice. 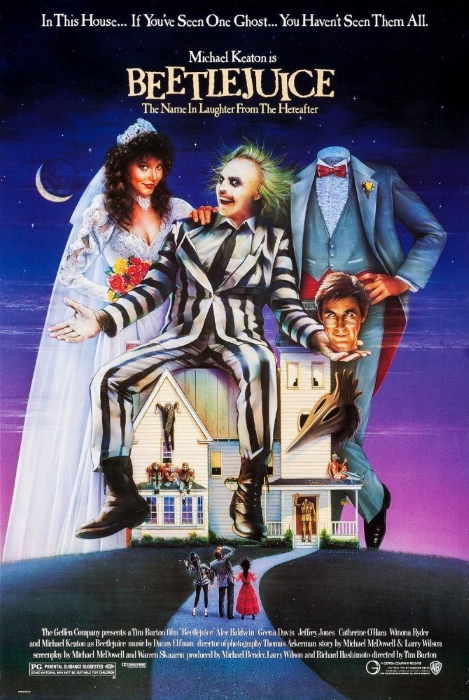 Played straight this might be a scary little movie about ghosts and hauntings. But director Tim Burton does not play it straight. He simply can’t; there’s too much fun to be had just laughing at what is, at its core, an ultimately thin and silly little story. So much of this movie ought to be picked-apart. There are more plot holes, inconsistencies and contrivances than you can shake a stick out. So many little things that happen in the movie have no explanation and really make no sense: Why do the Maitland’s enter their home through the front door right after death only for that same door to be a gateway to Saturn (which has solid ground, green moons, and giant worms)? Why do the Maitlands, after clearly being the victim of a botched Exorcism, suddenly revert back to their normal selves moments after being left rotting and elderly on the table? Why does Barbara have no reflection while still being able to be set on fire?

SO MANY QUESTIONS that don’t matter! 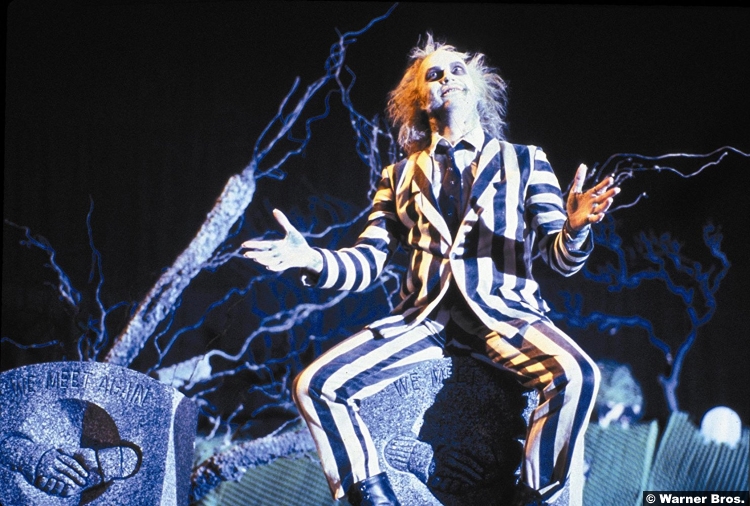 None of them matter because the movie never stops long enough for you to ask them. And whenever it gets slow enough that you might want to comment on some awfully convenient plot contrivance, it quickly sits on the whoopie cushion and makes you forget all about it. Case and point: When Juno starts talking about Beetlejuice for the first time, the lights suddenly get all red and spooky and Elfman’s ominous music kicks in. We’re a good twenty minutes after they discovered the Handbook, so the characters have already encountered Spooky Elfman Music; this time they look around the room for the source of the music and lights. It’s a gag. A naked, would-be scene-stopping gag, but it works simply because it’s too quick and funny not to work.

It may sound like I’m doling out backhanded compliments here but that’s not the intention: I love this movie so so much. I’m just likewise in awe of how audacious it was, how cavalier Tim Burton was with it, as though he had nothing to lose while making the movie…which is crazy because it was only his second major motion picture (after Pee Wee’s Big Adventure). He’d already been attached to Batman but Warner Bros was dragging their feet to finally start production on that movie. The script for Beetlejuice found him and hit all the notes the young director was interested in: It was dark, creepy, mocking in its humor, ultimately “pointless” (no lessons to learn, no morals of the story, none of that nonsense!) and ripe for visual experimentation (Beetlejuice has some of the most memorable art design and stop-motion work of any 1980’s movie).

The subject of the film’s name is a well-told story: Betelgeuse (the character) only appears for about seventeen minutes of screentime and doesn’t even get a proper introduction until exactly halfway through the feature. He’s a side-character, a minor antagonist, more of a mischief-maker and wildcard than anything (Sami Davis Jr. was the first choice to play the part, in what would have been a more laid-back style). And yet, despite so little screentime, Betelgeuse gets the title. Of course, Hannibal Lecter only had sixteen minutes of screentime in Silence of the Lambs; then again, he wasn’t the focus of the movie but just happened to be one of the greatest “supporting” roles ever. Betelgeuse, however, was clearly intended to be the character you walk away remembering.

The film grabs you right from the beginning with that creepy music, the haunting “day-o!” and the pan across the model town. So weird, yet so perfect; just like the movie itself.

The original screenplay was much darker, more graphic and less funny. It’s ironic then that the director often associated with the macabre would be the one to lighten things up. Of course, hiring Michael Keaton (who, at the time, was known for his comedic roles) had a lot to do with that too. Warner Bros. almost took things too far, however, as they insisted on changing the title to “House Ghosts” (a terrible pun/play on “House Guests”). Burton, in his trademark acidic way, offered to call the movie “Scared Sheetless” and then had to backpedal when the executives seriously considered the title. A compromise was reached and the easier to pronounce “Beetlejuice” was adopted as the film’s title. 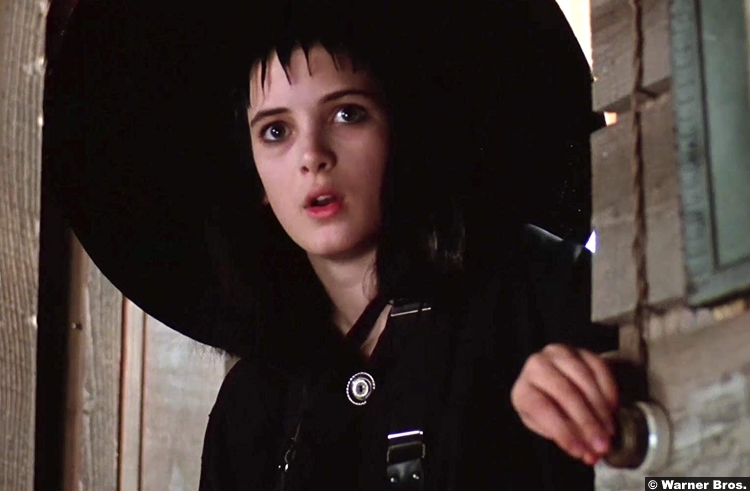 And now it reaches its thirty-year anniversary. It’s still as oddball as ever, as simultaneously dark and playful as it was then, and still an excellent showcase for Tim Burton, Michael Keaton and Danny Elfman in their prime.

Happy birthday to the ghost with the most.