You can read the previous installments in this series here:

As Elvis ended 1970, he did so on a high the likes of which he hadn’t experienced since the heyday of 1957. Multiple albums were selling hundreds of thousands (if not millions) left and right, single after single was charting high and receiving frequent radio play, his International Hotel shows were the standing room only talk of the Las Vegas and every stop on his brief nation-spanning tour in the fall had sold out on the day tickets went on sale.

The king was back on his throne.

But as thrilling as the year had been, it had been equally as hectic. As exhilarating as it was to be Rock’s top banana once more, it was equally as grueling to keep up with the renewed demand he suddenly enjoyed. The solution, sadly, was prescription drugs. Uppers at night, to keep him going through the many early-morning concerts. Downers in the midday, to bring him down and let him sleep as much as he could in between house calls, rambunctious fun with his cronies and meet-and-greets with world leaders…

In December of 1970, Elvis made his now-legendary White House visit to sit down with President Nixon. The famous photo between singer and leader is iconic, and when copies finally went on sale, years later, it was the single-most requested item ever sold in the National Archives: 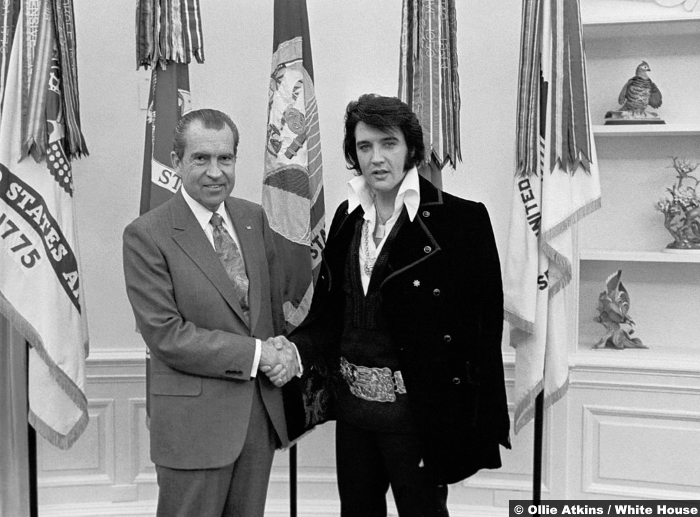 Sporting his recently-gifted “World’s Champion of Las Vegas Attendance” title belt, Elvis met with the President to discuss the epidemic of drugs facing the country. The actual story of how the meeting came about is so fantastical you’d swear it was dreamed up.

It began with Elvis’s father Vernon and his wife Priscilla complaining that he’d spent too much money on Christmas presents (something in the neighborhood of one hundred thousand dollars on friends and family). Tired of the drama Elvis left Graceland and flew on the first available flight out of town. It was a flight to DC and he took it. After spending a little bit in a DC hotel he decided to fly to Las Angeles. While resting in his house there he decided that he shouldn’t have left DC because he really wanted to meet the President, and he really really wanted to be deputized as a drug marshal.

What a random thing to really really want.

According to Priscilla, Elvis believed that if he had a badge and Presidential authority then he could travel freely with any kind of drug he wanted without the fear of being arrested or having his possessions seized.

So, just like that he left LA and returned to DC with California Senator George Murphy in tow. On the flight, he hastily scribbled a letter to the President explaining his intentions, confident he could just drive right up to the White House front door and sit down with the leader of the free world. Because why not.

First I would like to introduce myself. I am Elvis Presley and admire you and have great respect for your office. I talked to Vice-President Agnew in Palm Springs three weeks ago and expressed my concern for our country. The drug culture, the hippie elements, the SDS, Black Panthers, etc. do not consider me as their enemy or as they call it the establishment. I call it America and I love it. Sir, I can and will be of any service that I can to help the country out. I have no concern or motives other than helping the country out. So I wish not to be given a title or an appointed position. I can and will do more good if I were made a Federal Agent at Large and I will help out by doing it my way through my communications with people of all ages. First and foremost, I am an entertainer, but all I need is the Federal credentials.

I am on this plane with Senator George Murphy and we have been discussing the problems that our country is faced with. Sir, I am staying at the Washington Hotel, Room 505-506-507—. I have two men who work with me by the name of Jerry Schilling and Sonny West. I am registered under the name of Jon Burrows. I will be here for as long as long as it takes to get the credentials of a Federal Agent. I have done an in-depth study of drug abuse and Communist brainwashing techniques and I am right in the middle of the whole thing where I can and will do the most good. I am Glad to help just so long as it is kept very private. You can have your staff or whomever call me anytime today, tonight, or tomorrow.

I was nominated this coming year one of America’s Ten Most Outstanding Young Men. That will be in January 18 in my home town of Memphis, Tennessee. I am sending you the short autobiography about myself so you can better understand this approach. I would love to meet you just to say hello if you’re not too busy. Respectfully,

P. S. I believe that you, Sir, were one of the Top Ten Outstanding Men of America also.

I have a personal gift for you which I would like to present to you and you can accept it or I will keep it for you until you can take it.

Elvis landed in DC around sunrise and his letter was quickly delivered to the White House. It came into the hands of a Nixon aid who happened to be a big Presley fan. Knowing the good publicity that would come with meeting with the biggest entertainer in the world, the get-together was hastily arranged for noon that day. Elvis brought his bodyguards/lackeys Sonny West and Jerry Schilling as well as the “gift” he mentioned in his letter: A Colt-45 that he quickly grabbed from his Las Angeles mansion on his way out the door.

Elvis was waiting inside the White House to meet the President before the Secret Service even inquired about any items he had brought. That’s when he whipped out the gun, which the Secret Service quickly seized before ushering him into the Oval Office. Elvis apparently thought he’d just waltz up to the President’s desk with a revolver and seven matching bullets.

Their meeting was brief with each star-struck by the other. Elvis repeated his request for a badge and then lit up when Nixon turned to an aid and said “Can we get him a badge?” When the aid nodded, Nixon turned to Presley and said “Consider it done.” Elvis was so happy he grabbed the President and hugged him.

I’m sure that’s a no-no today.

As Elvis was being escorted to the Oval Office door to leave he turned back and asked if his entourage could meet the President too. They did and Nixon gifted them White House-engraved cufflinks. Still not satisfied Elvis said, “Mr. President, they have wives too.” So Nixon gave the wives brooches on behalf of the First Lady.

The man was on a roll. Elvis could have gotten an ambassadorship out of him if he wanted.

1971 began with a humbling award. As he’d mentioned in his Nixon letter, Elvis was honored by the Jaycees with their annual “Most Outstanding Young Men” award given to “young men who demonstrate outstanding achievement in their field of endeavor.” It sounds a little like a Simpson’s gimmick, but it’s actually an honor that had been handed out since the 1930s (and continued to be well into the 2010s). It’s sort of a “congrats on achieving the American Dream” honoring, and Elvis was touched to receive it and gave a short and heartfelt speech in acceptance.

Another Las Vegas engagement came and went with mostly the same set-list as in 1969-1970, except a new song was featured as the show-closer: “The Impossible Dream” became a sort of a biographical anthem for Elvis and one he fell in love with briefly in this year. Even though much of the early 1971 Vegas season was hindered due to illness, he still gave the closing-number his all, and regularly received big ovations for it.

Another studio session was booked for the Spring, but the March recording was ended early due to Elvis still not being in good health. In fact his eye was causing so much trouble that he went to an optometrist and was diagnosed with secondary glaucoma. Determined to press forward with one big marathon session (such as had succeeded in 1969 and 1970), Col. Parker and Felton Jarvis rescheduled the March session for May, intending to burn through some forty songs and end with enough material for three albums and some 45s.

The success of the 1957 Christmas record, which had recently been re-released as a ten-track budget album (to tremendous sales), had Parker itching for a follow-up for years. All he’d been able to wiggle out of Elvis so far was a single song in the mid-’60s and the 1968 TV Special that featured one throwaway rendition of “Blue Christmas.” Parker was determined to have a proper Christmas album recorded, as well as a follow-up to the big 1967 How Great Thou Art hit record.  Elvis, however, had other music on his mind: Folk.