The Purge S01E10 Review: A Nation Reborn – We finally find out who survives the night

ICYMI, The Purge has been renewed. Also, the show got another season. If we’re going with the trend so far, it’ll be anthology-style, with a whole new cast in a city they’re pretending is not New Orleans.* But that’s a while off yet, so let’s check back in one last time with this cast.

As I mentioned last week, I couldn’t wait to find out the egregious sin the Betancourts committed. I mean, he’s got Penelope in a cage because of a five-second etiquette lapse, so God knows what Rick did. (You know it had to be Rick.) 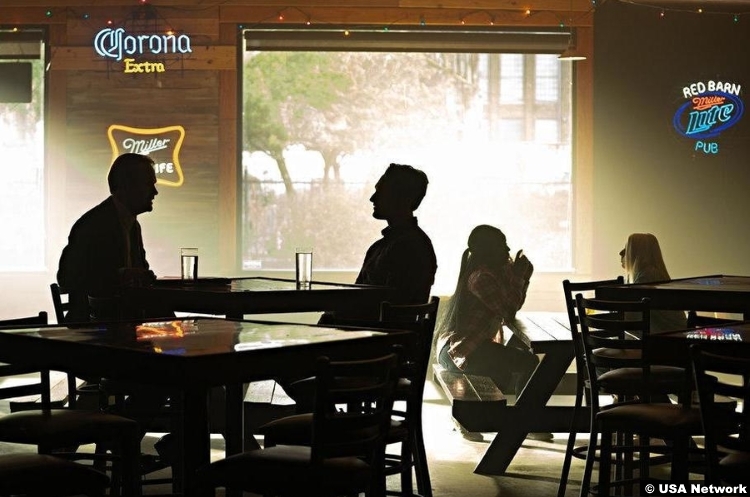 And it was something Rick did. Apparently, Joe reinvented himself as a security installer after his layoff from Saticoy. Rick hired him to do just that in one of his and Jenna’s buildings. Everything was going great until Rick claimed there were issues with the system installed–it was failing quality checks–and took advantage of a clause in their contract to withhold payment from Joe.

Rick denies and denies any wrongdoing, but it’s clear, even to Jenna, that something isn’t right. Finally, he confesses. The project was going to collapse, so he spotted the loophole and gave himself some financial breathing room. He’s defensive–“Everyone screws everyone, all the way down the line”–but that belief system is how you get a Purge, folks. Jenna, by this point, is almost resigned. It reminds me again of that John Connolly line I’ve already quoted, about how good is “corrupted and polluted” when you perform acts of evil to get there. It ultimately doesn’t really matter what Rick did, Jenna thinks. By taking money from bad people, they were doing bad. 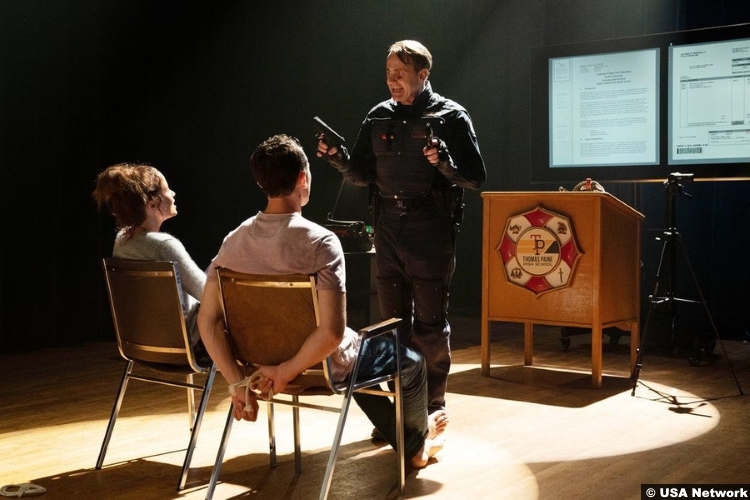 Maybe Rick should have held out longer, though, for his confession, because maybe Joe’s work isn’t that great. While he’s bickering with the Betancourts, Penelope finds a loose screw in the cage, handy for both removing her restraints and fake-threatening the other remaining prisoner, Paige (Kelly Murtagh) a gal from Joe’s father’s insurance company. When Joe tries to put out this fire, Penelope stabs him in the eye with the screw. Yeowch. At this point, all heck breaks loose, as Joe’s prisoners make a break for it. Miguel and Pete have been outside, by the way, this whole time, engaging in a fight with Rex and his goons in a B-plot that seems as if it exists just to have something to cut to.

Penelope and Paige run in one direction, where Paige is felled by one of Joe’s booby traps. The Betancourts go in another, where they run into Miguel and Pete. Miguel goes off after Penelope, then the remaining trio are surprised by Joe, who shoots Pete in the leg and Rick in the chest. It’s a little over ten minutes ’til the end of the Purge, at which point emergency services will be back on, but Rick doesn’t make it.

Meanwhile, Penelope and Joe have one last stand. She’s still ready to die, but she’s not going to do it while accepting his pity party bullshit. As she deftly points out, if the Purge were so great, if it really made the country better, wouldn’t they have grown out of it at some point? Before they can come to an agreement, because they never will, Miguel bursts in and shoots Joe. And Miguel must have never seen a horror movie, because after one shot, he’s turning his back on Joe to embrace his sister.

Big surprise, here comes Joe again. Anyway, all three of them tussle, but before anyone can really get the upper hand, the sirens go off. Joe’s like, that’s okay–I’ll just come after y’all next year. So Miguel kills him. Outside, when our survivors are reunited, Jenna and Pete are like, “Nope, didn’t hear anything after the siren.” 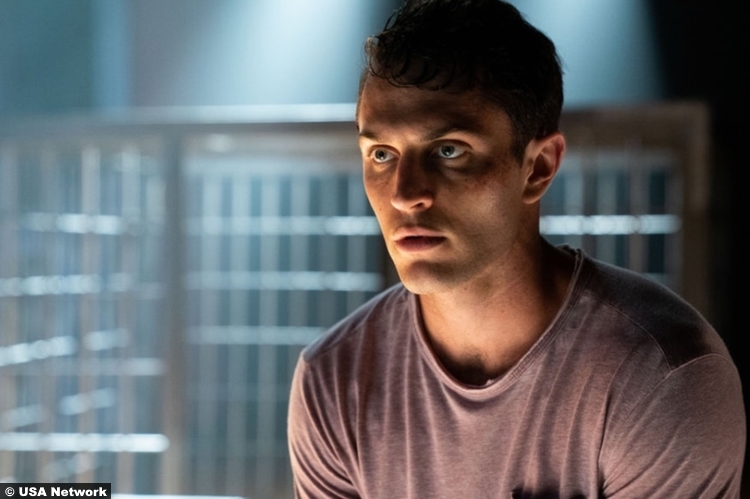 One year later, Jenna and her baby are in Paris on Purge night. Yeah, good idea. If the Purge ever really pops off in the States, I’m heading straight for the safety of Germany, a country that has never done anything questionable ever. [CITATION NEEDED] Back in not-New Orleans, Pete’s serving drinks to Miguel and Penelope, who are both in flak jackets and declining his offer to stay at his place. They’re heading out on Purge night to do what their parents would have wanted, the kind of thing that actually makes America great–they’re helping people. *commence sirens*

8/10 – While I wasn’t that satisfied with the resolution of the revolution storyline–the French newscaster mentions precautions against that sort of thing this year, but what happened with the original one???–and the other storylines were rather neatly tied, that’s not so bad. As this is an anthology, we’d like to know how it ends. And in many ways, we could see these endings coming. Jenna’s always been conflicted, Rick has always been compromised, and Penelope’s always been adaptive. And Miguel’s apparently bulletproof, I don’t know. I just know that I never once thought he was really in danger. But that’s a minor complaint at best. Overall, I enjoyed the season, as much as one can enjoy something frightfully close to home. Speaking of, the stuff about the propaganda guy, Bobby Sheridan, whose name I’ll never stop trying to type as “Bobby Sherman,” came up so much that I wouldn’t be surprised to see it make a reappearance next season. As the news is sadly, not short of stories about people being radicalized by what they read and hear and see in the media, it’d only be fitting.

*When Jenna is in Paris, the French newscaster throws to an American reporter talking about the Purge. While they don’t name the city–just calling it “the city”–it’s unlikely a French news show would be talking to New Orleans, even if they used to own it. I guess they’re trying to make it like an everycity, like this could happen anywhere. (Fun fact, though: You can see the word “Louisiana” on a sign in the picture of Joe and Penelope last week.)