Among the many things that fascinate me about the Purge is the banality in the middle of all of it. People go out and do these extraordinary things–they kill strangers in startlingly inventive ways–right after like, eating a ham sandwich.

It should come as no surprise, then, that some people would find a way to monetize the Purge. During its lead-up to the series premiere, for example, USA Network ran fake commercials for a shopping network that was selling Purge armor. That kind of thing probably exists in the NFFA’s US. 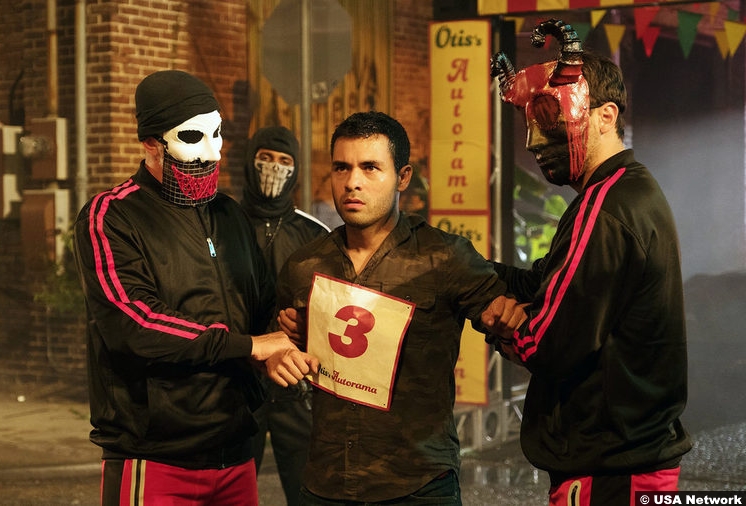 Miguel doesn’t run into that, but he does run into a different kind of monetization. He’s captured and taken to The Gauntlet, a contest broadcast by the owner of a used car lot. As with any Gauntlet, the object is to make it through. As this is Purge night, though, it’s a little challenging. Miguel has to make it around the block and back. If he comes back, he wins a vintage Chevy SS. If he loses…well, who cares? It’s good entertainment, ain’t it?

While he’s fightin’ around the block and making it through an obstacle building–calling it a “course” seems too mild–Otis (Lance E. Nichols) of Otis’s Autorama is beaming the whole thing into God knows how many homes. It’s a feature attraction at the Stantons’ party, where the women and men react like they’re watching something no more troubling than a football game.

Rick’s not watching, though, as he’s finally been called upon to do some schmoozing. As he tries to network and get some money from the likes of Albert Stanton (Reed Diamond), Jenna awkwardly stands by herself. I don’t know if she’s trying not to be obvious that she’s watching Lila’s every move, but she’s being VERY obvious. Finally, Lila comes over to her. 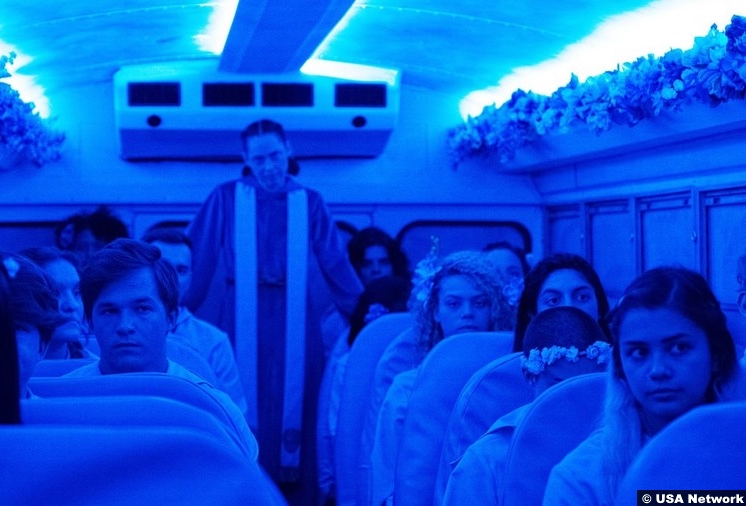 Clearly, we don’t know every fine contour of this threesome yet, but judging by the interactions, we can at least surmise a few things. One, it was more than sexual between Lila and Jenna. Two, Lila is still carrying that torch and Jenna might be. Three, Lila sees Rick as standing in the way of her happiness. That last one is my fuzziest point, but I’m going by the mild threat Lila delivers to Rick about her father’s support. Whether my deductions are correct or not, I do know that a locked-down party is not the greatest place to play out a love triangle. An only slightly related deduction: Jenna has a headache, tum tum troubles, and isn’t drinking. So she’s either pregnant, dying, or the show is just trying to distract me.

Back at Jane’s building, her underling Alison (Jessica Miesel) snoops around and finds something that unnerves her on Jane’s computer. I don’t know if she saw the app or not, but the tone of her later conversation with Jane–about having a Purge wish list–seems to indicate that she does. That app, of course, is the one by which she’s following her deal with Bracka (AzMarie Livingston). 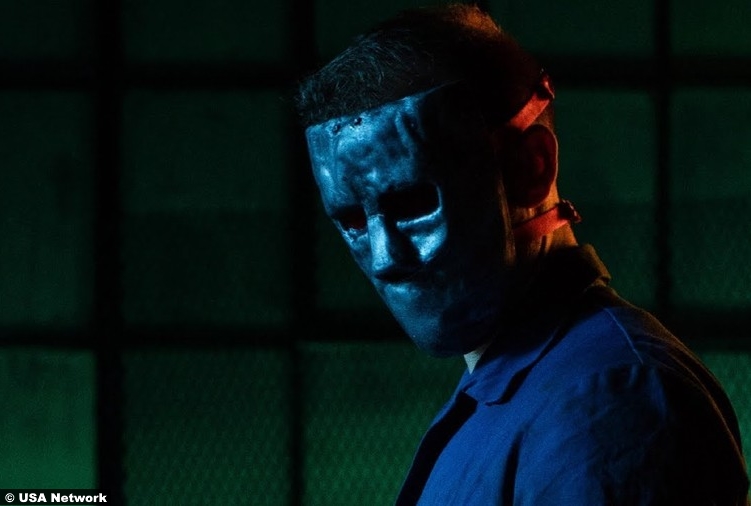 It’s not made explicit, but it seems pretty clear that Jane’s put a hit out on her boss, Don (William Baldwin). As for the reasoning, she came into the firm with big dreams of advancement and they were moving smoothly along until she rebuffed Don’s advances. Then she found herself shut out of company parties and stagnating in her career.

Still, she’s better off than Penelope. Whatever hesitation she had last week, she’s back to drinking the Kool-Aid this week. Melissa (Emmanuelle Nadeau), however, who’s sitting in front of her wants out. So obviously, Good Leader Tavis (Fiona Dourif) gets a vision to pick her next. Penelope tries to volunteer as tribute–and wouldn’t that be a fine kettle of fish if she got purged before Miguel finds her?–but she’s gently spurned by Tavis. Poor Melissa.

As Miguel tries to get help from “Pete the Cop” (Dominic Fumusa), a mysterious masked man roams the city. Who is he? (I’m guessing Lee Tergesen.) What’s he after? (Revenge?)

8/10 – Although the stories don’t move forward much, we did get to see at least one backward. Learning about Jane’s motivation goes a little way toward earning our sympathy for her. On another note, although it seems perverse to enjoy them, the action sequences with Miguel during the Gauntlet were really well-done. The look at other aspects of Purge night, like the volunteer medics, was also quite interesting. More of the little details, please!