The Purge S01E01 Review: What Is America? Some intriguing storylines…

Although we haven’t specifically reviewed any of The Purge film series here, IRL I talk about it a lot. Like, a lot. Do I have a Purge plan? Maybe. *cut to me at the end of the Annual Purge in my bunker with at least one stolen dog and a Scrooge McDuck-size money vault*

Everyone I know: Stop making the siren noise! 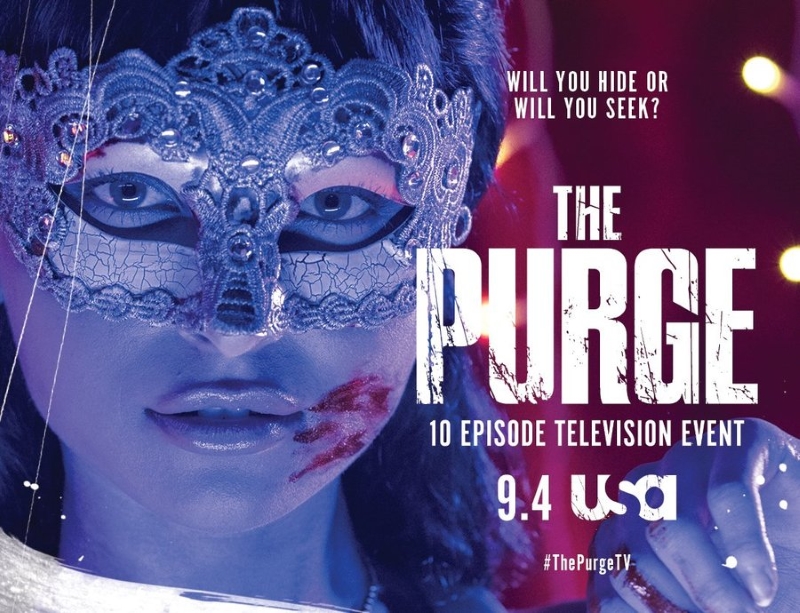 I’ve seen all of the films, which have been a mixed bag. That, combined with the difficulty of adapting films to TV, had me a bit apprehensive when USA announced a limited edition Purge series. Sometimes movies adapted to television series can be successful. Other times, they are less so. So how did they do? Let’s find out.

As the show begins, we are just over an hour until the commencement of the Purge, which is taking place in an as yet unnamed small city (that I can easily recognize as New Orleans). We meet Miguel (Gabriel Chavarria), a Marine who’s back from Afghanistan and who is looking for his sister Penelope (Jessica Garza). It’s clear that she’s had some problems–he first goes looking for her at a rehab–but we know something Miguel doesn’t. Judging by the robes, Penelope’s joined a cult. CULT 2018, BABY! And judging by the brief conversations we overhear between cult members, they’re going to sacrifice themselves. For the Purge? Because of the Purge? Ah, who can fathom cults?!

Speaking of, aren’t the New Founding Fathers kind of a cult? In case you’re unfamiliar, the New Founding Fathers of America is the political party that took over the United States after a period of “economic collapse and social unrest.” To get the country back on track, they began the tradition of the Annual Purge, after a test night on Staten Island. Now here we are years later, about to see the something annual–the timeline is confusing–Purge.

Of course, not everyone purges. Obviously, money buys safety. It puts distance between you and the fire outside. That’s where we find the rest of our recurring characters. First, there’s Jenna (Hannah Emily Anderson) and Rick (Colin Woodell), a married couple who usually stay in, locked up tight on Purge nights. They’re venturing out this year, because they’ve been invited to an NFFA-affiliated fancy party and they need to network for their charity.

Then there’s Jane (Amanda Warren), a financial professional who’s supposed to be pulling an all-nighter with her team on a secured floor in their office building. As the guards repeatedly assured Jane and her underling that the floor was secure, I answered them: “Somebody’s gon’ get in, though.” After all, they wouldn’t have mentioned it so many times if they weren’t trying to foreshadow it. I must admit, though, I was a little surprised that it was Jane who let the “somebody” in.

While she’s setting that up, Miguel is finding the cult HQ and learning what his sister has planned for the night. We’re learning that their parents were killed on a Purge night years ago, which I suppose explains a bit about how they’ve turned out. As you might imagine, Miguel is horrified to find out what his sister is up to these days. 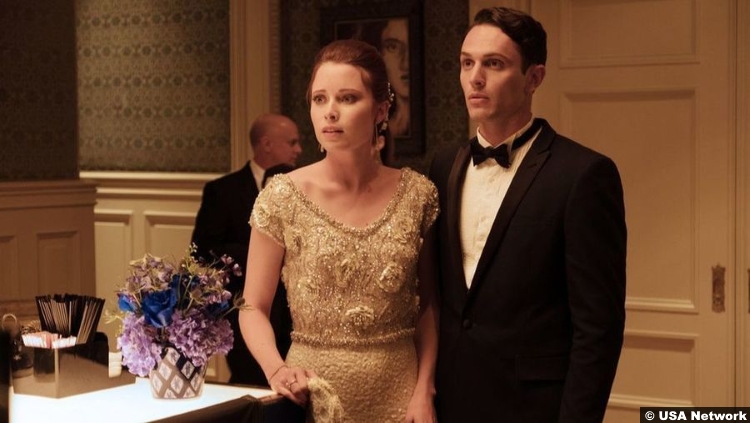 Having almost as bad a time are Jenna and Rick at the party. Look, it seems like a boring party and when the Purge barriers come down and the guests are given serial killer masks to wear, that just makes it a creepy boring party. Jenna and Rick had, at the very least, a sexual relationship with Lila (Lili Simmons), the hosts’ daughter, and the only saving grace for them tonight is that Lila is out of the country. Whoops, no, she isn’t! Thank goodness–awkwardness was what this party was missing.

As they digest that, Miguel cruises the city, looking for the cult bus. It, meanwhile, has stopped in a field, where Arnold has been chosen first for “The Giving.” As he stands there, waiting for the masked assailants to attack him, it almost seems like his composure falters for a moment. And a moment later, when they’re upon him with their axes and sledgehammers, it definitely seems like Penelope’s does. I don’t think she wants to be here anymore. Let’s hope her brother finds her fast.

8/10 – Although, as I said, it can be a challenge adapting a film (series) to television, so far it’s pretty good. The show has set up some intriguing storylines. I think the party is the most interesting one so far, but who knows what’s going to pop off in Jane’s office building? We still don’t know, after all, for what purpose she hired a Purge-night assassin. Finding that out and learning a little bit more about what the NFFA is up to has grabbed both my curiosity and my attention so far.