13 Reasons Why Review: Season 2 – Why won’t they tell their parents?

Whether I’m watching season 1 or 2 of 13 Reasons Why, I have a couple of recurring thoughts. The first is one I often had whilst watching Pretty Little Liars, the show we discuss here exactly the right amount: Why won’t they tell their parents?

[Note: This review will include spoilers and will frankly discuss subject matter, including suicide and sexual violence, that some readers may find upsetting. If you are in crisis, I urge you to visit the website the show has set up for viewers to find help. Please don’t hurt yourself or others. There is someone who will listen to you and I want you all to be safe.] 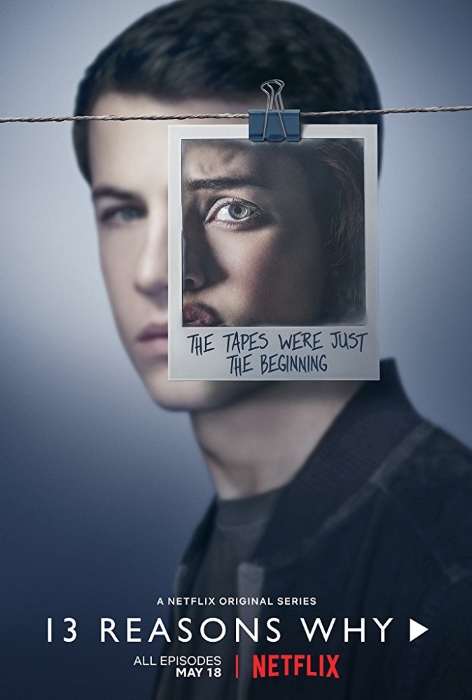 I realize that there are cultural and other differences out there. And not everyone has that open of a relationship with their parents. I mean, I didn’t tell my mama and daddy every detail about the parties I went to, but if I’d gotten an anonymous death threat? I would have turned the full force of my parents on them. (Y’all don’t want that.)

But these kids stay clammed up. Part of that could be chalked up to teenagers being teenagers, but let’s be real. It’s mostly that way for narrative reasons. If the kids told the adults anything, there’d be no show. There’d especially be no season 2.

That’s because the kernel of season 2 is the Bakers’ lawsuit against Liberty High and the school district for their negligence. Without the framing device of Hannah’s tapes, this season instead uses court testimony to structure each episode. One by one, the kids get on the stand and are forced by the school’s awful lawyer into telling their deepest secrets.

Opening up the show’s storyline to tell other stories, to let other kids have a voice, is theoretically one of the better aspects of this season. Hearing only Hannah’s side of the story doesn’t give us the full truth, after all. Giving a voice to characters like Jessica (Alisha Boe), whose testimony episode (“The Drunk Slut”) is maybe the best episode of the season, provides us with an entirely new perspective. Like Hannah, Jessica was raped by Bryce (Justin Prentice). Clay and Alex keep urging her to go to the police or to talk about it during her testimony and they don’t really understand why she won’t. She sweetly, sadly tells Clay that unlike Hannah, she’s not the “right kind of victim.” 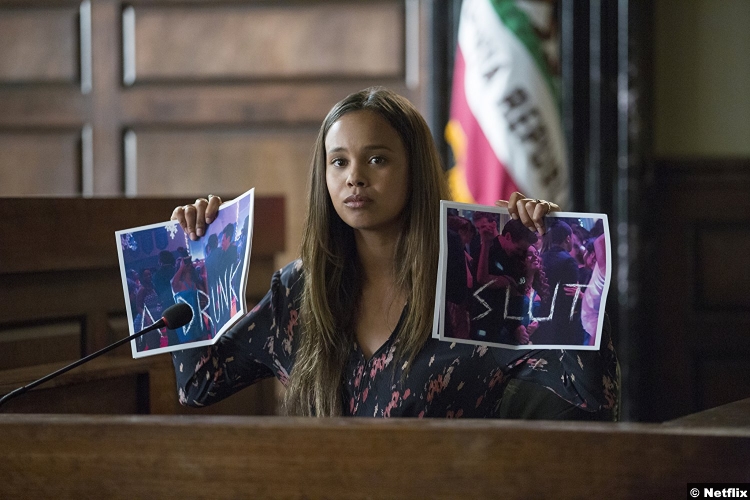 They want her to speak out not to help her but to help the case and to punish Bryce. Jessica moves on her own time, though, which is a right every survivor should be afforded. She’s able to find strength and the help she needs by joining group therapy and speaking to people who understand. In addition, she’s given a role model in the form of Nina (Samantha Logan), a fellow student who refuses to let her rape define her life. Jessica is given the room to grow and heal in this season, which is a good thing. 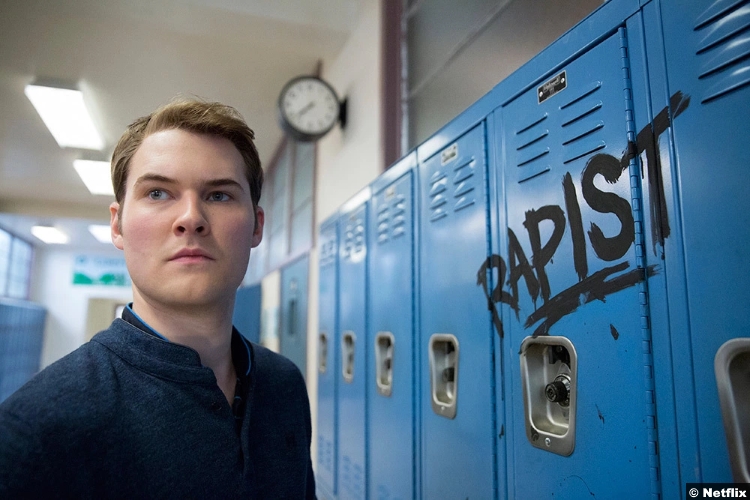 However, the show gives voice to so many characters that it may be too much for some viewers. There are so many storylines going on and so many characters and everyone talks the same and nearly everyone seems to be hiding a dark secret. It can be exhausting trying to keep up. I kept shouting, “WHO?” at the screen every time another character was introduced or reintroduced.

Like, another recurring thought I had was of this PSA. While we’re watching all this other drama, Tyler (Devin Druid) seems to clearly be headed directly toward orchestrating a school shooting. We saw his weapons stockpile in season 1 and in one early episode of season 2, he’s even wearing a shooting sweater, which I thought was a bit on the nose. 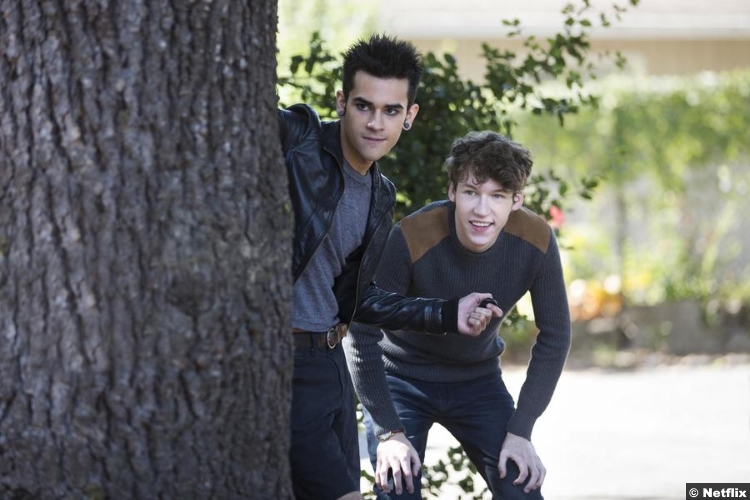 But while I was paying attention to him, the show was pushing yet another narrative, that of Monty. It turns out he’s behind a lot of the ugliness in season 2. And to that, I can say only, who? It isn’t earned and it doesn’t make sense. The show hasn’t laid the groundwork for this character, who I still only vaguely recognize, to become so important by the end. And that’s a problem they have repeatedly this season.

See, since they ran out of book, they keep the story going by revealing new truths during the trial and by having someone send Clay Polaroids that depict Liberty High’s rampaging rape culture. But some of the revelations, like Zach’s exact relationship with Hannah, just don’t make any sense in conjunction with the first season. I understand that they want us to be like first season Clay, realizing we don’t know anything about the people we thought we knew. I just wish they’d come up with something a little more logical. 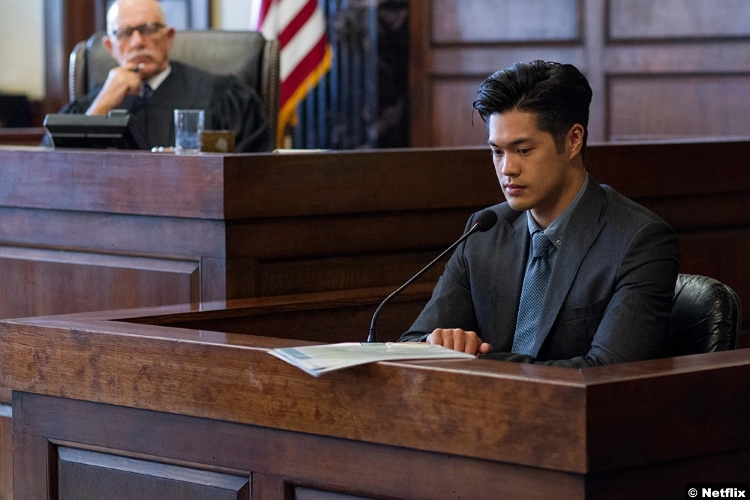 And I wish they’d come up with anything other than where they go in the last episode. I said Jessica moves on her own time and that time comes near the end of the season, when she and Justin (Brandon Flynn) finally go to the police to report her rape. Bryce is convicted and she’s allowed to make a victim impact statement. The show turns her solitary statement into a shared one, blending her words with statements from other characters, talking about the harassment and assault they’ve faced. It’s moving and one of the best moments from the series, period. 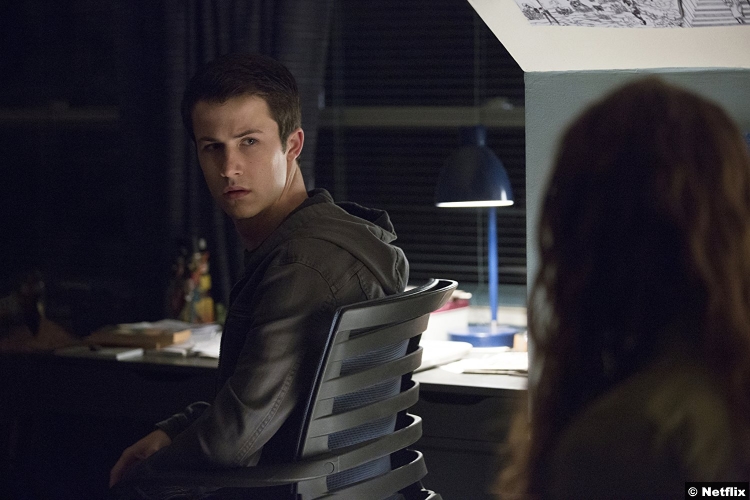 Unfortunately, the show decides to go in a vastly different direction with another decision. Monty and the who-cares gang come upon Tyler in the bathroom and viciously assault him. Netflix and show creator Brian Yorkey have defended this scene by talking about how male-on-male sexual violence is often under-reported if not completely unreported. I understand that and I would never try to argue against it. In the wake of #MeToo, men shouldn’t be left behind.

Again, I’m not criticizing this kind of plotline. What am I criticizing is the graphic nature of it. Tyler is thrown into a mirror, has his head repeatedly slammed into the edge of a porcelain sink, and is then dunked into a toilet. And all this happens before he’s raped with a mop handle. We see every second and that is my issue with this scene. It’s important and right for the show to talk about victims who often go unnoticed. But this is a show aimed at teenagers. I don’t see how showing them every brutal detail helps. And if the show really wanted to discuss it, why save it for the last episode? The show can give all the excuses it wants, but to me, it seems like they were trying to do something controversial to recreate the controversy over the graphic depiction of Hannah’s suicide in the first season finale. And if there is a season 3, I don’t even wanna imagine what gratuitous horror they’ll cook up for its finale.

6/10 – While some of the storylines, including Jessica’s and Alex’s, respectively, are handled responsibly and respectfully, the final episode torpedoes all those good intentions. In addition, there’s some good, grounded acting here, but it’s often in the service of some nonsense. That would be a lot more tolerable if it were entertaining [see also: Riverdale], but this show is a depressing slog more frequently than not. I recommended the last season with reservations, but I can’t really find a reason for this one.

[And again, children: Like Hannah’s mom says, there are always more reasons why not than there are reasons why. If you need help finding some, go to this website and get help.]