Mindhunter Season 1 Review: A compelling look at the history of modern criminal profiling

Mindhunter is Netflix’s new series based on the history of criminal profiling in the FBI. If the name was familiar to you before the series, you’ve probably already guessed that it’s based on the work of former FBI profiler John Douglas. 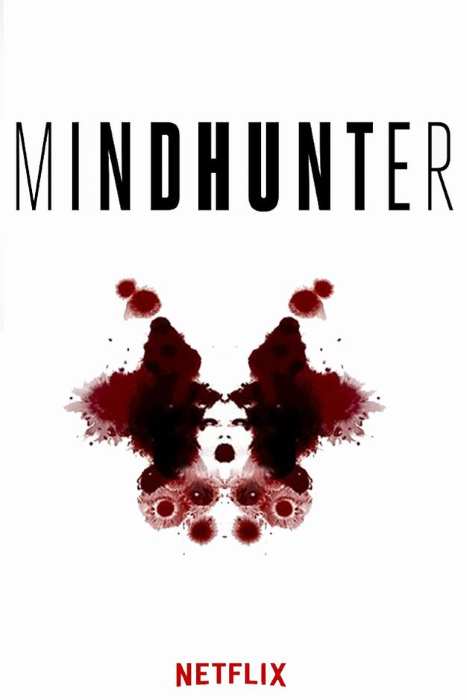 In the series, Douglas is reimagined as Holden Ford (Jonathan Groff), a Quantico instructor who’s so earnest it makes my teeth hurt. A chance meeting with sociology postgrad student Debbie (Hannah Gross) piques his curiosity about what academia knows about criminology that the Bureau doesn’t. He attends some classes at UVA, but still doesn’t feel like he’s cracked the criminal mind. He’s then invited to shadow veteran agent Bill Tench (Holt McCallany), a character based on  former agent Robert Ressler. Tench travels around the country, teaching police departments the latest in FBI know-how. But as Ford is figuring out, they don’t know all that much.

The realization hits him in Iowa, where a local detective tries to pick their brains concerning the recent violent murder of a woman and her little boy. As Ford tells him they’re “in the dark” as to the motive, it’s like it’s the first time it’s truly occurred to him. 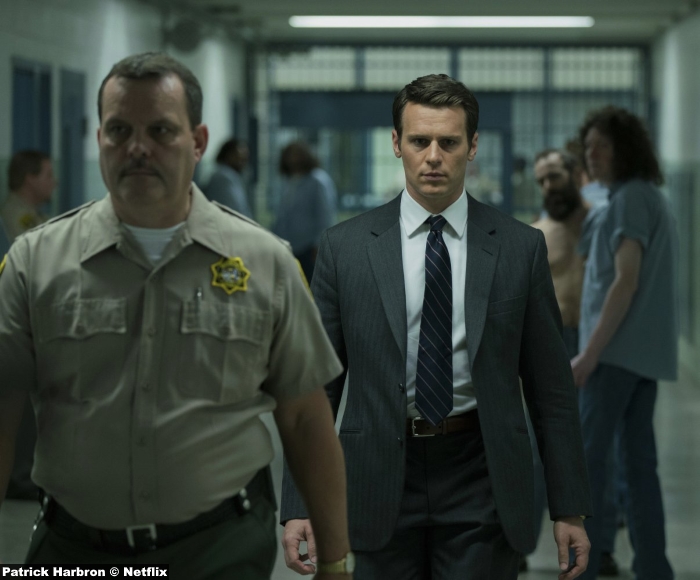 So when “road school” takes them to California, Ford wants to travel to Vacaville, where one Charles Manson is incarcerated. He’s told that Manson is likely a no-go, but if he’s going to Vacaville, he should talk with Edmund Kemper (Cameron Britton), the Coed Killer. Kemper is the kind of killer we’ve gotten used to seeing in TV and movies—he’s bright and eloquent, casually dropping the word “oeuvre” in conversation, for example. That he’s using the word to refer to his “vocation” of serial murder is never far from our thoughts, though.

It may be difficult for modern viewers, then, to put ourselves in Ford’s place and to remember what crime-solving was like back then. I thought of the movie Night of the Hunter. When I first saw it, several years ago, parts of it seemed clichéd, like Robert Mitchum’s knuckle tattoos, which read “LOVE” and “HATE.” It took me a bit to realize that parts of the movie seemed so familiar because so many shows and films have borrowed from it. That’s the sensation you might get watching Mindhunter, as they build the science of profiling. But it’s a world where they don’t know the term “serial killer” yet, because they haven’t invented it.

Of course, that doesn’t mean they don’t exist yet, and in some number, if Kemper is to be believed. He estimates that there are around 35 roaming the country, which he doubts the law will ever catch. (As an example, at the beginning of episode 2, we see a flash of one who won’t be caught for another 20+ years.)

But can Kemper be believed? That’s one of the risks with which Ford has to reckon. During their first meeting, Kemper steamrolls Ford into eating egg salad sandwiches with him. Later, we find out that Ford doesn’t like egg salad. But he ate it with Kemper. Let me say that again. Kemper gets a grown man to eat a sandwich he doesn’t like. You can argue, of course, that Ford is just trying to gain his trust. But just imagine Kemper, 6’9” Edmund Kemper, with a teenage girl who’s always been socialized to be nice. Ford might just be polite and Kemper might be pleasant enough in conversation with Ford, but we can never forget that he’s a manipulative killer. 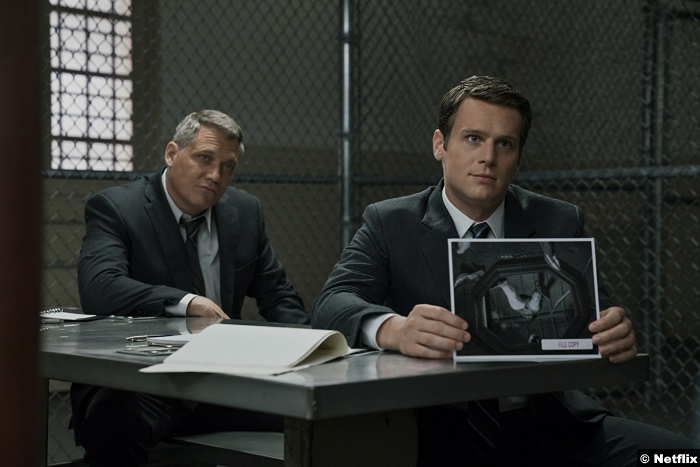 So when Tench doubts the sincerity of Kemper’s involvement, especially after Kemper parrots Ford’s language about “conditioning,” it’s not difficult to sympathize with the veteran agent. Still, he and we can see the potential value in Ford’s work. Tench sees it enough to stick his neck out for Ford in a confrontation with their boss, who is none too happy about his agents’ secret assignations with Kemper. They’re reassigned to the basement, but they’ve been given latitude now.

The work they did has echoed for years since. It’s become part of our pop culture fabric, seen weekly on procedurals like Criminal Minds. But Mindhunter isn’t as interested in the prurient details as the average weekly cop show. Unlike a product killer like Kemper, they want you for your mind, not your body. There are few cheap thrills here. 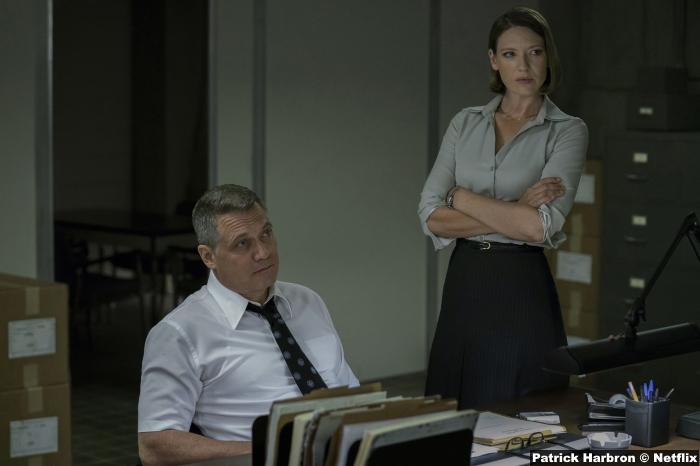 That’s not to say that Mindhunter is not an entertaining show. Britton is outstanding as Kemper, and when he did casually drop that “oeuvre,” reader, I hollered. However, it’s not perfect. Unfortunately, as is all too common, the female characters, including Debbie and Anna Torv’s Dr. Wendy Carr (based on Dr. Ann Wolbert Burgess) are underwritten. Anyone who’s seen Fringe can tell you that Anna Torv can do the heavy lifting. [Sidenote: If genre shows were given the respect they deserve, Torv and her castmates would have buckets of awards. But I digress.] Debbie and Holden’s sex scenes can also be jarring in the midst of hearing from men who love women…when their heads are on sticks.

But these are semi-minor quibbles for a show that’s overall very good. If you’re looking for gore, you’re going to be disappointed. However, if you’re interested in a program that’s more talking than trauma, Mindhunter is show for you. Sometimes it feels like the world is irrevocably broken, that there’s always been something rotten at the core. Mindhunter reminds us that there are people out there who want to fit the pieces back together and try their hardest to do so.

8/10 – Although it starts out shaky, the show gets better and deeper as it continues. While I can’t say the same for its female characters, at least it cares enough to cast them well. That confident casting is most exemplified with the relative newcomer Cameron Britton, who is noticeable in a cast that’s not exactly nondescript. Mindhunter shows us a world with methods and terminology with which we’ve become familiar and shows us how we got from there to here.