It’s no secret that the United States has a gun-violence problem. This year alone has seen the country go through multiple mass-shooting incidents. Under the radar is the murder rate in various cities; in Chicago ten people a day are shot and on average one person is murdered every day. It’s a painful situation for our land and not one that sees a solution in the near future. People like to slip into entertainment—movies and television—to escape from the world. Even when the entertainment in question is horrific or dramatic it is still something beyond the regular and the normal and the usual and the “everyday.”

Marvel’s parent company Disney and TV distributor Netflix greenlit The Punisher immediately after the character was warmly received in the second season of DareDevil. In fact “warmly received” is an understatement; most agree Jon Bernthal absolutely stole the show with his dark, conflicted, raw and real take on the Marvel anti-villain. At the time Marvel’s Netflix slate was riding high; DareDevil season one was a brilliant debut, Jessica Jones proved a virtually-unknown character can work if the writing is strong and the acting sincere. DareDevil’s second season slipped only slightly in the second half but it was still highly regarded, again with Jon Bernthal’s work receiving the lion’s share of praise. There was no reason not to keep the train rolling.

Since then, however, things have not been as smooth. Luke Cage started strong but really stumbled in its second half and Iron Fist was a bomb from the outset. The big mini-Avengers team-up series, Defenders, improved on the previous two series’ but failed to live up to the expectations. Still, hopes were high for The Punisher. The character was well known, like DareDevil. The story promised to be down-to-earth and drama-focused with a strong lead, unlike Iron Fist. Fans were eagerly anticipating it.

Then the Las Vegas shooting happened.

Disney and Netflix decided to delay the release from its expected mid-October drop (only a couple weeks after the shooting) to mid-November, hoping that enough time would pass for them to release a show about a gun-toting maniac without it coming off as “in poor taste” and without the complaints that it “wasn’t the right time.” The delay was quiet; I don’t think there was even a press-release (Bernthal himself confirmed it, however), but it was smart on the part of Disney and Netflix nonetheless.

And then—two weeks before the (new) premiere—just outside of Houston, the Sutherland Springs shooting happened. 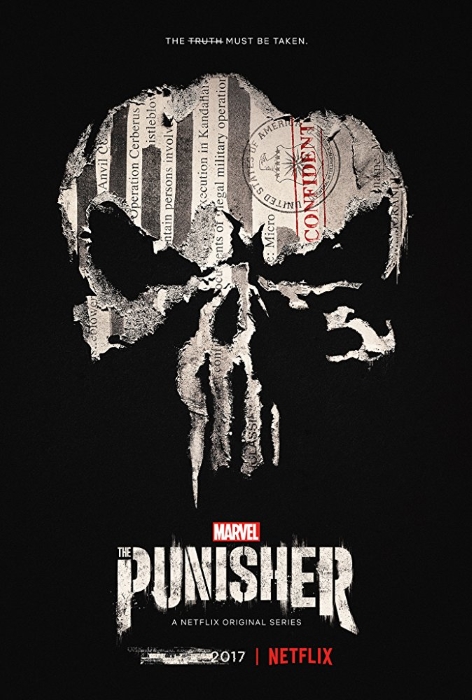 By that point Netflix had already announced a November 17th release date for Punisher (they hadn’t specified a date when they bumped it in October). To bump it again would have put a big spotlight on the series and on how it is perceived, internally, by Disney/Netflix. There was nothing to do but press on and hope for the best. Now that it’s out, most reviews (including, I guess, this one) have focused on the show in the context of the gun violence that’s recently happened in America, with more said about the relation between it and how Punisher “glorifies” such violence, than on the actual content of the show itself.

I disagree, however, that Punisher “glorifies” gun violence.

I will happily concede that there is a connection that is inescapable between this show and what has happened in the USA. And it’s sad that a medium meant to allow us an escape from reality’s horrors instead serves as a terrible reminder of them. But to look at this show and the character at the heart of it and say “this is part of the problem” fundamentally misunderstands both the show and the characer of The Punisher. 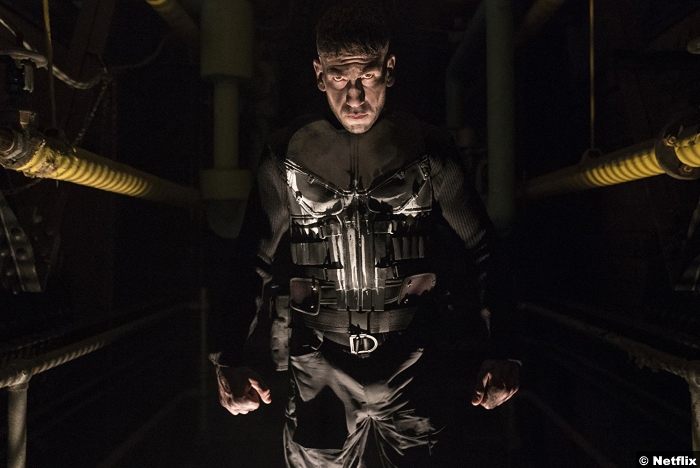 The Punisher is not a hero. If he was then you could rightly balk at the timing or the circumstances or whatever you wanted to balk at. Personally is there ever a time to hold up a disturbed gun-toting person as a hero? No and that’s never been in the interest of Marvel anyway. That entire argument is a strawman. The Punisher is not a hero. Is he often sympathetic? Certainly. Is he occasionally disturbing? Absolutely. He’s also always captivating, thanks to Jon Bernthal’s portrayal of Frank Castle as a man struggling with his violent past and present, not a man reveling in it.

This show doesn’t glorify violence…it is haunted by it. To say The Punisher is not the show we need right now in the wake of this shooting or that tragedy misses the point entirely. The Punisher is exactly what we need. It reminds us that there are disturbed people out there that need to be found and who need to receive the help they need to, if not recover, then at least be sheltered so that they don’t have the means to do what happened recently in Las Vegas and Houston. 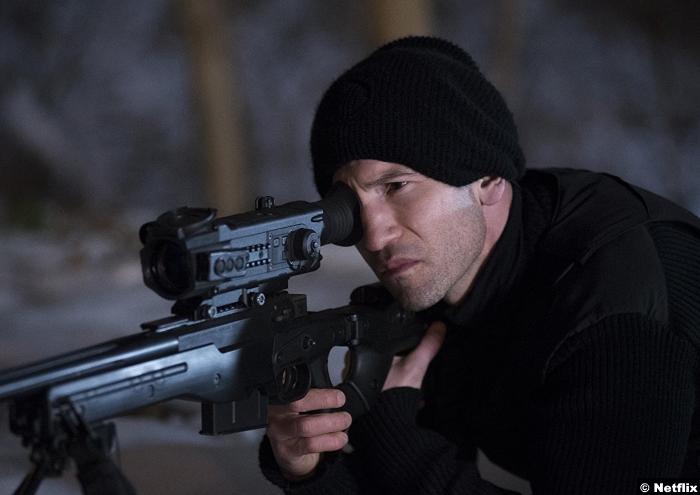 The Punisher is a comic book story, not a documentary. But through the filter of that make-believe world it tells a story that reminds us that there are real people in the real world who need help just like this pretend person in this pretend world does. The show focuses on a character ravaged with PTSD, who has terrible demons that haunt him and even though he tries to direct his unbridled rage at people you have to say are worse than he is, there’s still nothing about what he does that is cheer-worthy. Even when he’s helping a relatively innocent person under attack by a trio of thugs (as in the first episode), there’s never a moment where you smile at his violent actions. The idea that he’s doing this because he’s a broken man scarred by the trauma of his past is always in your mind. It defines Castle and it defines the show.

9/10 – The Punisher may not be the show for you, but it’s not because “this isn’t the right time” for it. If it’s not your show it never was your show, and that’s fine. But those familiar with the character and those who were impressed by his role in DareDevil season two will find a faithful adaptation of the world of Frank Castle here. It’s grim, it’s raw, it’s uncomfortable, but it’s also a gritty, “comic-book-world” reminder that troubled people do troubled things.