I don’t care if it doesn’t make sense, Chapter Seven is in the Episode Nine club

It speaks to the inherent weirdness of Legion that as I’m watching David argue with a British version of himself that claims to be his rational mind, I think to myself that this is the best show on television. FX is on a bit of a hot streak, what with The Americans going strong, Ryan Murphy scoring another hit worth Feud, and their confidence in all things Noah Hawley. Without the success of Fargo Hawley wouldn’t never have made Legion, so it’s appropriate that when Legion is down next week, there won’t be too long to wait until Fargo season three. My point is that, very much due to Hawley, and his projects, FX is the best place for challenging drama at the moment.

Ok, enough accidental advertising, let’s talk about Chapter Seven. The Episode Nine club is only called that because The Second last Episode Club doesn’t role off the tongue. So due to this technicality (come to think of it, the penultimate episode club could work) Chapter Seven makes the grade for being the most mind-blowing episode of Legion yet, and that bar was set high.

It seems fitting that an episode that plays with the rational and the irrational would use quite traditional story techniques to get its point across. Legion has thus far been excellent at using different filmmaking styles to keep the viewer ill at ease, and just a step behind, but here the episode presents traditional tools used in untraditional ways. There are two main examples of this that I want to highlight, mostly for their use of exposition. 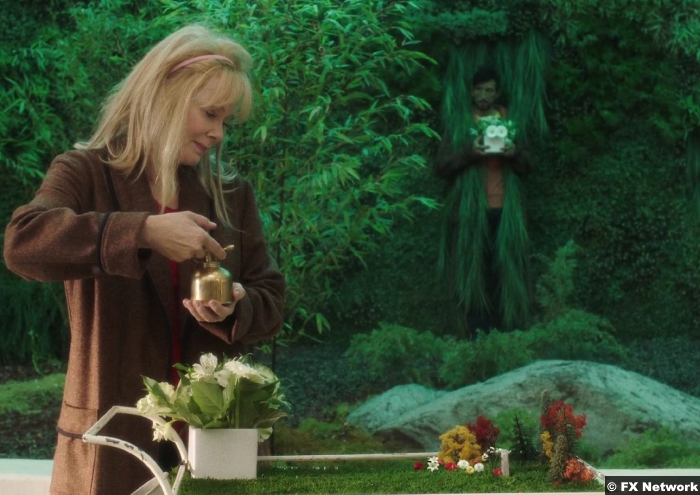 Exposition in films and television can be a sticky proposition. Television pilots are affected the worst by info dumps that are designed to not so subtly give the viewer a better idea of characters and the world that they inhabit. Most superhero shows use exposition in a clumsy way. For example, take any scene in DC’s Legends of Tomorrow that has to sum up the threat to the team in any given episode. The situation is described within an inch of its life, with each character in its large cast getting a line so no one feels left out. The same can be said about scenes featuring fewer characters. Take the first episode of Iron Fist where Ward Meechum talks to his father for the first time, giving out the typical daddy thinks I’m a disappointment lines sop the audience is left with no doubt that their relationship is lousy.

Those are two examples of lazy exposition. Legion has two instances where they treat the info dump, which is both designed to get both the characters in the scene, and to a lesser extent the audience because Legion trusts that we have been paying attention, up to date with the current situation.

The first scene is between Cary and Oliver in the astral plain. Through a conversation that is filled with interruptions, musings about the ethnicity of Oliver’s wife, and lines of poetry, the scene utilises a lightness of touch to accommodate the fact that the scene is just an info dump. The difference is that the show isn’t spelling the plot out, instead it’s summing it up so we can move to the next step.

The second example of this is David using a projection of his rational self, in which Dan Stevens gets to screw with everyone by using his own accent, David gives himself a literal connect the dots lesson, complete with classroom and blackboard. Again, this is information that we the audience have already put together, because we are always allowed more information that David. What makes this scene more than just an info dump is the style with which the information is represented. In a show that never lacks for innovative style, the animation of David’s infection at the hands of the Shadow King (I knew the name would be that cool), is yet another filmmaking technique that the show nails.

Chapter Seven is about the duality of the rational and the irrational, the imagination verses common sense. There are numerous examples of these different ideas at war with each other. To David and his friends common sense is power. David is not trapped in a box, how can he be if he isn’t even in his own body. It’s the imagination in which the Shadow King has power, but this entity is spread thin as each character rebel’s against the Clockworks fantasy. Empowered by the rationality glasses, which as a symbol is top notch, Syd, who already knows that none of this is real tries to save David and the rest of the group.

It’s difficult to talk about the episodes final confrontation between David and the Shadow King. The use of the visual language of silent film was an inspired choice since the Shadow King is nothing if not whimsical, but David’s rejection of this reality, the way he destroys it and manages to stop Syd dying in the real world is significant because he doesn’t face the Shadow King head on. They don’t actually share a scene in the entire episode, meaning that is great as David’s freeing himself and his friends, the problem is still there. You can’t just compartmentalise your pain by putting it in a box, sooner or later, in this case sooner, it will break free. Which isn’t good news for David or the Division 3 goons that capture him at the end of the episode. Lenny has some more mischief up its sleeve.

9/10 A – rewarding, and exhausting, episode more than earns its place in the Penultimate Episode Club (yes, it is better), and sets up a compelling problem for the next weeks finale.