American Gods S01E08: Come to Jesus – Season One ends with faith rewarded, and just a tinge of anti-climax

American Gods first season has certainly been unique. Bryan Fuller and Michael Green have succeeded in bring to life Neil Gaiman’s sprawling fantasy novel and improved on it greatly, well at least the first third since that’s all that’s been adapted. Season one’s eight episodes have proved to be the most varied hours of television in 2017, and this is Twin Peaks year. Come to Jesus is pretty much all new, just Bryan and Michael letting us know that they’ve got this down, and the results, though mixed, provide a nice full stop to this first chapter.

It turns out that American Gods first season has a lot in common with another anarchic, religious, road trip adaptation: Preacher. Both are adapted from works of famous comic book writers, both are concerned with finding Gods even if the reasoning is different, and both have breakout Irish characters. The first season of Preacher acted as a prequel to the main action that will commence in season two, and wouldn’t you know: American Gods has pulled off the same thing, but much better.

Season one of American Gods has been all about teaching us how to watch it, while at the same time moving Shadow to a place where he can believe all the crazy shit that’s been happening around him. It’s a show about belief, and how stories can be delivery systems of belief. Each week we meet a new god, who is usually played by a character actor having the time of his/her life, and presto: we believe in that character. Come to Jesus has gods coming out of its over-sized bunny ears, including a big mess of Jesus’, as well as Mr Nancy, Bilquis, and the new Gods. It shoves us and Shadow into the technicoloured deep end as war is properly declared. It’s a fine episode and a suitable convergence point for the major players of the first season. 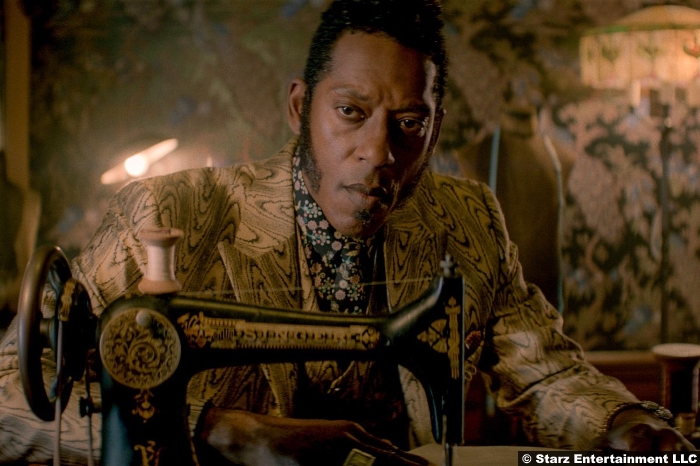 But first, a story. This wouldn’t be American Gods without a beautifully written, acted, and shot diversion from the main narrative. This time, instead of our usual guide Mr Ibis, it’s Nancy that spins the proverbial web as we are shown Bilquis rise and fall through millennia. Even before Nancy screams the moral of the story, that you need a queen, Bilquis tale is a testament, if nothing more, of what a viewer can get used to. While the orgy unfolded and morphed into Bilquis disco themed degradation I found myself popping my shoulders to the beat while simultaneously eating a snack. It’s not toi say that the show doesn’t thrill me, or knock me off balance as in previous weeks. It’s that I’m now deeply entrenched in Fuller and Green’s America. As good as this story is it’s still frustrating that Bilquis hasn’t been given the same nuanced treatment as someone like Mad Sweeny. Even through her own history it’s hard to get a grasp on who she is when she isn’t swallowing people with her vagina, which is the weirdest sentence I’ve ever written.

So, yes, the goal is for Wednesday to get a queen on his side. How does he do that? With a string of brutal insults that shatter Easter’s fragile sense of self by pointing out that Jesus has stolen all of her credit. Jesus Prime feels terrible about this. Played by the wonderful Kristen Chenoweth, Easter is another distinctive god who, despite being surrounded by the son(s) of God, manages to steal have the episode all to herself. The main reason for this, other than the fact that Chenoweth seems to have brought a chunk of Pushing Daisies with her, is that Easter has a active influence on all of the episodes main story threads. 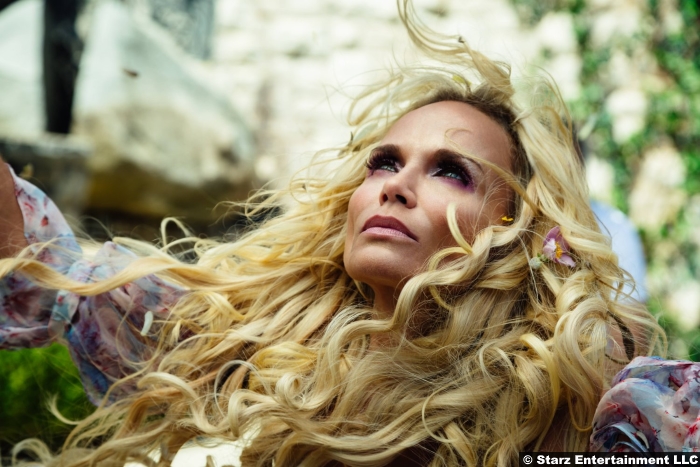 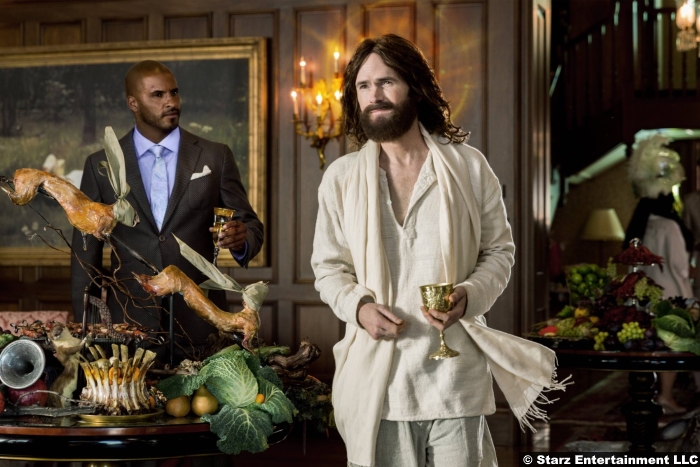 She is the object of Wednesday’s desire of adding another powerful god to hos growing army. She is the god that Mad Sweeny thinks can resurrect Laura, and she already has a steady deal with Media that Wednesday doesn’t know about. As we have already seen in Bilquis story, and Vulcan’s too: the old gods are vulnerable the more belief they lose over the years making them a prime target for the new gods to take advantage of. Easter and Media have a connection that goes back decades that gives Easter her worship even if it comes at the expense of no one remembering her for who she truly is. Pivotally Easter is the first god to show that she has world affecting abilities. One criticism I have of Neil Gaiman’s novel is that the stakes of the war seemed a little distant since it had little obvious effect on the world it was being fought over. The show has changed that: on a small scale with the police station massacre, and now on a large scale as Easter takes back the spring. It’s a huge gesture, a declaration of war, and one that the new gods are taking seriously. 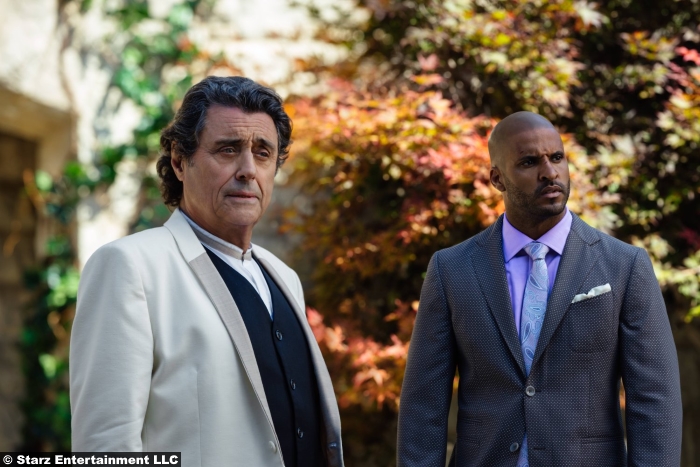 The other consequence of this is that Shadow now fully believes. This element worked less for me as this seems like a weak arc the longer it’s stretched out. Even the reveal that Wednesday is Odin is anti-climactic since Norse mythology lives on through Marvel and Vikings, meaning that his identity was obvious to anyone paying attention. Still, the gauntlet has been thrown down and war is inevitable. Shadow is still Wednesday’s man, although maybe Laura will have something to say about that.

8/10 – American Gods first season has skilfully built a universe more diverse, beautiful, and brutal than anything else on television. Even if the ending is a little anti-climactic, it doesn’t stop this unique story from being one of the year’s best shows.