The experience of watching Chapter Five of Legion brought to mind a host of influences that the show is now wearing on its sleeve. To its credit these influences enhanced my viewing experience rather than coming across as derivative. The first clue was Dan Stevens’ performance which echoed both Anthony Perkins as Norman Bates and Jack Nicholson in The Shining. Stephen King has famously derided The Shining, saying that Nicholson’s performance left no room for ambiguity: it was clear that this was someone who had gone mad. There are shades of this in the way that Stevens plays David here, not that he’s gone mad, but that something has gone horribly wrong inside of him.

In every scene he is just a little off, a little too confident in his newfound acceptance of his power. When he’s with Syd in there white room sanctuary, and talking to Melanie about seeing her husband in the astral plain, he is almost predatory in his movements and dead-eyed smirk. It is enough to have you asking, what is wrong with this picture? Syd and Melanie aren’t exactly blind to this change but find it easier to be thankful that they saved David from the astral plain and have him back on their side. Syd is understandably preoccupied with David’s creation of the white room, a place where they can be together like a normal couple, a place in which they can have the kind of physical intimacy that has been denied to them thus far in their relationship. David’s thinly held aggression can, again be explained on the surface by his need to rescue his sister from Division 3, and his confidence in his own abilities. 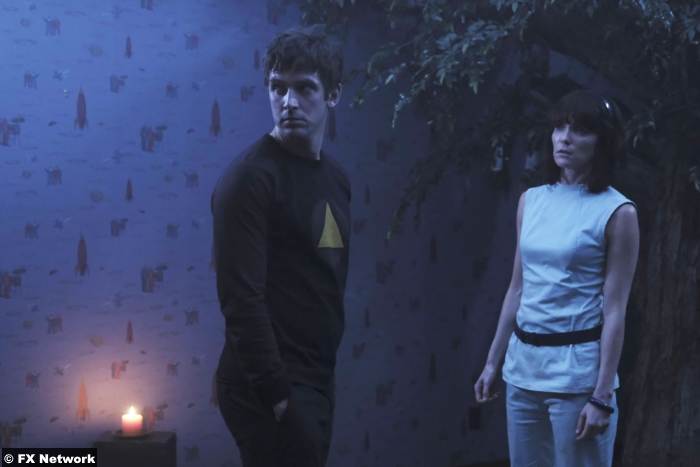 Interestingly when thinking about the full episode it is hard to pinpoint exactly when the Fatman has taken full control. If he has control from the beginning then David and Syd’s intimacy is tainted, but the fact that David is arguing with Lenny as Syd sleeps suggests that David still has some level of consciousness at this juncture. Even more interesting is the actual identity of Lenny/Fatman/the world’s angriest boy in the world. When Cary is going looking over David’s brain scan again, he catches glimpses of the fatman on the monitor: glimpses that come when David is stressed. Not only that there is a picture of David as a child suggesting, which Cary then confirms, that the Fatman first manifested itself when David is a child.

The Fatman is part of David but not in the way we first thought. He, or it, is a parasite who, because David is an incredibly powerful mutant, is able to borrow into David and feed of him. It’s also powerful enough to mess with David’s consciousness, deleting or editing memories so it can stay hidden. Speaking of influences, like Bryan Fuller’s majestic Hannibal series, Legion owes a huge debt to David Lynch and, in particular, Twin Peaks. The Fatman is Legions’ version of Bob an evil spirit that takes over a host in order to commit horrible acts. Acts like murdering everyone, well almost, in Division 3.

The Division 3 sequence is another brilliant set piece from the show. Sound tracked by Radiohead’s “Daily Mail”, because mind-bending shows must use Radiohead songs because it’s the law, Syd Melanie, and Pytomny follow David to Division 3 only to find that he has massacred everyone. At first they only see the aftermath, bodies melded into any hard surface that will take them. Lenny was right after all, he didn’t need back-up. I was a little disappointed at first that we didn’t get to see David in action but that was fixed as the Melanie and Ptomny accessed the security feed in order to piece together what happened. What we see is truly horrible as David gleefully hops and skips and murders his way through the complex. It is here that we are given confirmation that David isn’t driving, that this s the work of the Fatman. 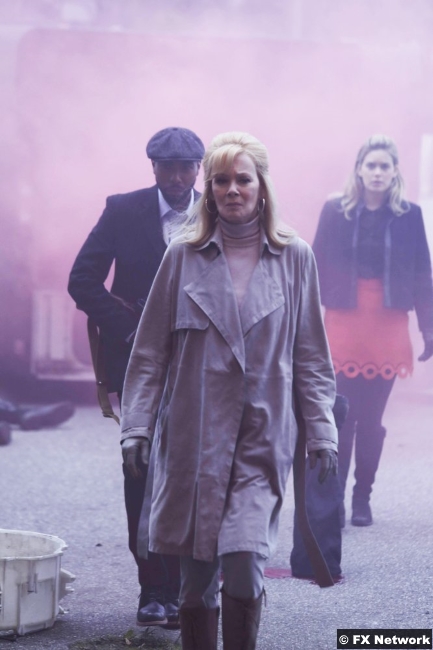 David did achieve his goal, he did save his sister and took her back to their childhood home. It’s here that Lenny materialises and forces David’s sister to admit that David was adopted, which fans of the comics will already have guessed, and it also explains the blank faced parents that are in David’s memories.

It’s in David’s home that the Lynch influence goes into overdrive as the house transmogrifies into a nightmare controlled by Lenny, complete with nightmare stipulations of being unable to communicate, and having your body not respond to your own will. Syd finally finds David as Lenny is torturing him and blaming them foir putting new ideas into his head. Syd pleads with David to send them to the white room, a place of safety, but the Fatman is there as well stalking Syd through the room as David is powerless to intervene. As the Fatman corners Syd on the bed where she and David made love, the symbolism of that shouldn’t be lost on anyone, David bends reality, sending everyone in the house to a place resembling Clockworks in which they are all patients and Lenny is the doctor.

10/10 – Chapter Five was a spell-binding hour of television and the strongest episode of Legion to date. If there is any justice then both the cast and crew will get awards recognition. Legion is able to tell a coherent story through incoherent means, a story in which all that has influenced it is a platform in which Noah Hawley has created something truly original.