Legion S01E08: Chapter 8 – An excellent season caps off with a touch of Pink Floyd

A few weeks back I commented on the new trend of mind-bending shows using Radiohead songs like it was a new law. So imagine the wry smile on my face when Legion went even more obvious in their song choice with Pink Floyd. The presence of “Breathe” from Dark Side of the Moon is so cheekily obvious that it just, misses the point of cliché. The songs inclusion is the latest example of Legion nailing the type of style and tone created throughout these eight episodes: very weird but on the right side of familiar.

Chapter Eight bypasses another cliché. Legion is, first and foremost, a comic book show, so its genre leanings are closer to science fiction than anything else. However, the genre that come the closest to overwhelming the sci fi trappings is horror. The Shadow King is a villain most suited to horror which brings us to another convention that the show turns on its head. In most horror films the personification of the threat: ghosts, monsters, and killers of all descriptions, the terror that they evoke is usually lessened when they are fully introduced; not so with Legion. The Shadow King, mostly in the form of Lenny, doesn’t lose its threat because for Chapter Eight its motives are different. Last week was the Shadow King’s last gasp attempt to take over David completely. This week its only need is to survive him, meaning it must utilise new tactics.

That’s not the only threat that David and co are facing as we last left them surrounded by Division 3 and the return of the severely burned interrogator (Hamish Linklater). This threat is quickly neutralised by David as he believes that he can broker a peace between mutants and Division 3. Apart from the conclusion of David’s arc, of which I will get to in a minute, this idea of peace brings up the episodes most interesting questions. 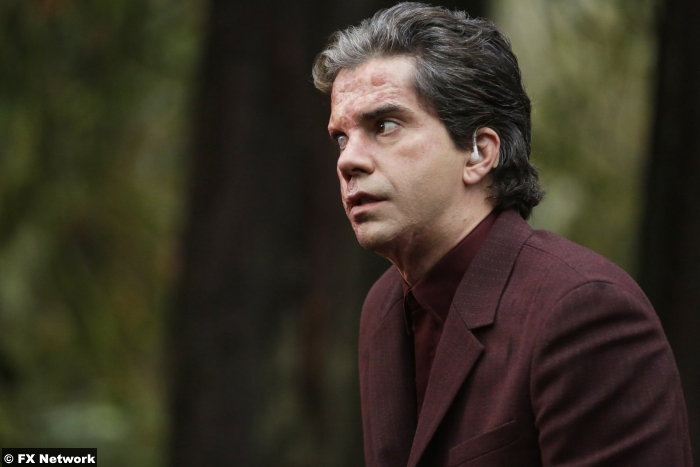 Let’s think about the X-Men films and how they represent the evolution of mutants in modern society. In the films the public bashing, and fear of said mutants are a thematic stand in for things like racism and gay rights. Many of the antagonists in the films, be they mutant or otherwise, don’t believe that they are evil. Magneto thinks he is his kind’s saviour, that mutants are gods. William Striker in X2, despite being played with evil gusto by Brian Cox, has reasons for hating humans because of his son, and his taking advantage of Wolverine’s powers are, to him, an advantage to US military concerns.

Division 3 is portrayed the same way. Through the episode’s introduction we see the Interrogator’s recovery from the horrific burns cause by David’s escape. We see his family support him through this recovery, and him dealing with his disfigurement. It was a lot easier to root against Division 3 when or point of view was The Eye, but through this intro we see the human side of them. This is clearer when the Interrogator sums up what Division 3 actually is. It’s a branch of the US government served with protecting the nation from powerful mutants like David. He’s not evil, he just has a different experience. For the show to play with the set definitions: Summertime-good, Division 3-bad, that has been apparent all season in the finale is an ambitious play. A play that pays off as the threat of the Shadow King is made so clear that it forces a union between these two rival factions, for them to come together to face the bigger threat. 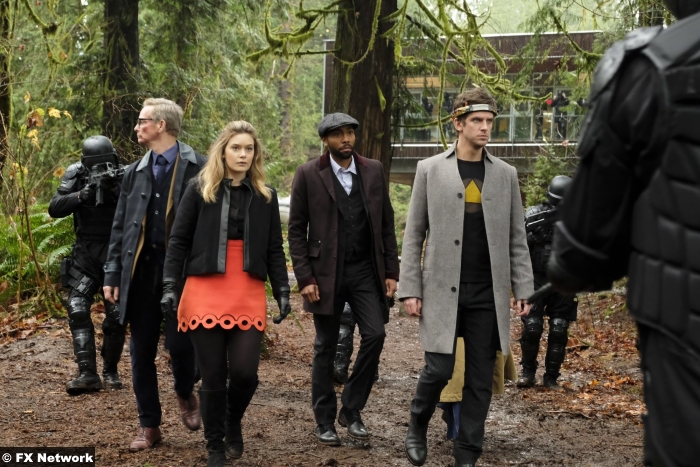 Which bring us back to Pink Floyd, specifically the scene that “Breathe” soundtracks. With the promise of being rid of the Shadow King, David starts to think about what the loss of this parasite could mean for him. The Shadow King has been a personification of David’s mental illness all season, so when he asks the question “what will I be without it?” it’s an honest metaphor for people suffering from mental Illness. For many people that suffer from schizophrenia, or bi-polar disorder, and depression, its easy to separate it from themselves and view it as some sort of infection. It’s an infection that is part of them, firmly rooted in their personality, part of their identity. So when David is looking at his life, with every part of the Shadow King being erased from it, his question of “who am I now?” packs an emotional punch that transcends the sci fi window dressing of his disease. As does the feelings he shares with Syd before the removal is attempted: what if this is still his disease talking, what if this most powerful mutant/chosen one scenario is part of his schizophrenia? Because this is a comic book show David as a mutant has to be the reality, otherwise it wouldn’t be part of the X-Men cannon; but that doesn’t mean Legion shies away from these types of questions.

The battle is won, but at a huge cost. David is freed from the Shadow King as it manipulates Syd into giving it a way out. As it travels from Syd, to Kerry, to Oliver (whose powers in the astral plain make him the perfect candidate as an escape route) means that the Shadow King lives another day.

9/10 – Chapter Eight is a great ending to a great first season. There is really no other show, comic book of not, that has the ambition, charm, sensitivity with mental health, and epic scale than Legion. Roll on season two, and for those that haven’t already, watch past the end credits.