REVIEW: Mother! is a claustrophobic mess of a movie about nothing

Not every movie needs some big, elaborate “point” at least not an internal one. No one would walk away from Independence Day and say “what was the point of that?!” as though the movie accomplished nothing.  Of course it accomplished something, it just didn’t have an internal point.  It had a point though: The point was to entertain, and it does so wonderfully. On the other hand there’s a movie like Schindler’s List, whose purpose is certainly not to “entertain” but to move you emotionally, and it does so through a powerful internal “point” about how one man may not be able to make all the difference, but he can make enough of a difference, and that’s all the difference that some need. You can call that the “message” of the movie if you want; it’s the same thing: A movie needs a point, but it doesn’t have to have an internal—message—point.

Mother! has no point. 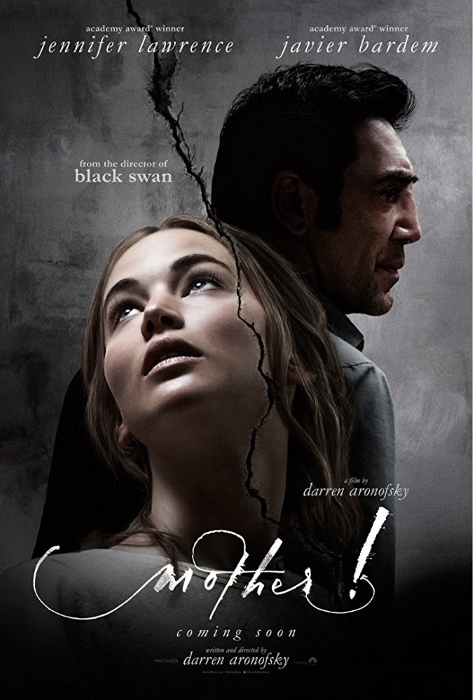 The movie’s first half is a masterclass of suspense, with an initial unsettling feeling that turns, very slowly, into a feeling of tension, then claustrophobia, then outright terror. At times you’ll wonder if all that happens is a bad dream or if there’s some big third-act reveal that will explain it all and make you reevaluate everything you thought you knew—At one point I was convinced Darren Aronofsky had remade Rosemary’s Baby without telling anyone—but no, there is no big twist. The movie arrives at a thematic conclusion that puts a neat and tidy bow on the story and does so with such a presumption of greatness, the director himself might as well have stepped into frame, stretched out his hands, and said “huh? How about that, right? Something, wasn’t it?”

It is not something. It is nothing. It is a movie with no message, no purpose, no point. If the intent is to be a horror film it stumbles by being too long, too slow, too void of actual scares. If it’s supposed to be a thriller, it succeeds for its first half, but then becomes simply too loud, action-heavy, and busy to accomplish any more thrills. Its point certainly isn’t to “entertain” because, after an hour, it stops being entertaining and just devolves into showing off a laundry list of symbols and in-your-face metaphors that add up to nothing in particular and collapse under their own weight.

Darren Aronofsky is a controversial director, there’s no disputing that. When your least-divisive and most “normal” movie is the powerful-but-dour The Wrestler, you know you’re dealing with a library of non-traditional films. His first movie, Pi, is the same wannabe artsy-fartsy black and white student film that a lot of directors have in their filmography. Aronofsky never moved beyond “artsy fartsy” and “pretentious=good” though; with Requiem for a Dream he just added color. The Fountain probably best exemplifies the director’s divisive nature, though for my money it’s a masterpiece, and the only time where Darren goes “full Aronofsky” and the movie doesn’t implode. It’s big and bold, complicated in its execution yet narratively simple. It stands alongside Black Swan (which, truth be told is less about the story as it is a couple amazing performances by Portman and Kunis) as his best works. Let’s not speak of the big budget turd that was Noah.

With mother!, the director once again goes all-in on his beloved brand of bizarre, dream-like structure and faux-realism, but he fails to stick the landing. It has the big images/little idea of The Fountain, but without the tightness in the execution. It has the surrealism of Black Swan, but with a scale far too big (despite the one-location setting) for it: Toward the end, the feeling of claustrophobia that makes the first half so strong turns into a nosy, busy mess. And unfortunately it has all the bleak, pointless “look at me” try-hard artsy-fartsy nonsense of Requiem for a Dream and Pi.

The plot is no spoiler; everyone from the director to the film’s two lead stars have gone on and on about it. But if you insist on seeing it, and have not yet been spoiled, and you don’t want to be spoiled, skip the next part… 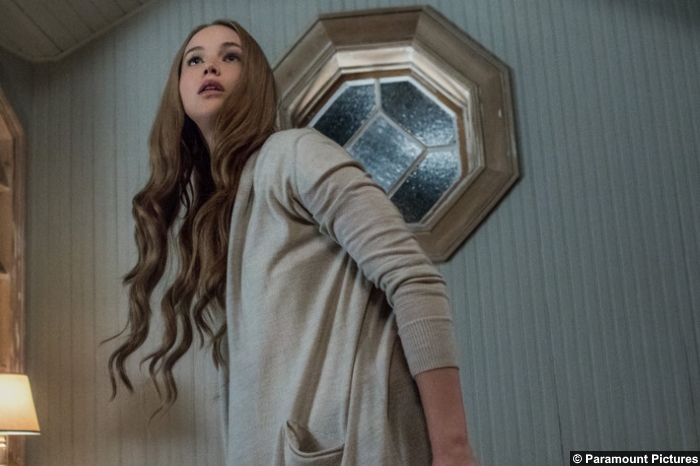 Mother! is Rosemary’s Baby, with God as the bad guy instead of Satan.

Now there’s a lot more going on than just that, and the actual “baby” doesn’t come into play until the late-second act, but the same sense of dread, where (on the surface) everyone seems crazy but the female lead, and there’s some kind of sinister cult going on, culminating in the birth of a baby…it’s like Aronofsky said “Let’s do Rosemary’s Baby, but let’s waaay over-complicate it.”

The hook is, it’s not Satan that’s the ultimate villain here, it’s God. Pesky God keeps letting we terrible people into the home of “mother(!)” and we proceed to trash the place. It’s an allegory for man ruining the planet. That’s it. It’s as base and superficial as that. And once you realize that, you’re forced to sit there and watch the shallow story play out in agonizingly slow fashion. And you’ll realize what’s going on at most an hour into the two-hour movie.

The rest of the film is just one quasi-Biblical reference after another, each one serving no purpose other than to say “see here! this is God and that is mother earth! THIS IS A SYMBOL FOR THAT! AND THAT IS A METAPHOR FOR THIS! EXCLAMATION POINTS!” If it wasn’t so stupid as an idea, it’d still be offensive in the unsubtle, un-nuanced way it is presented. If you want the laundry list of the metaphors, here you go:

The movie starts with God (in the credits: “Him” with a capital letter and he’s the only character with a capitalized name) and “mother(!)” living in a house. The house is representative of earth. She’s “mother earth” which is weird because everything else in this movie is somewhat Biblically based (skewered and skewed though it may be), but there is no “mother earth” concept in the Jews’ or Christians’ religion. But whatever, mother earth lives with God together alone and everything is swell.

Then a guy shows up. In the credits the guy is “man.” It’s Adam, but you already knew that. Man is later seen puking in a toilet with a fresh scar on his rib; God hovers over him.

The next day woman shows up. Eve, but of course. In the credits: Woman. There’s no depth here people. We’re all in the kiddie pool.

The woman and man touch the thing, and soon after their two kids show up. They’re brothers and they fight and one brother kills the other. Cain/Abel.

Then a lot more people show up and take over the house before the pipes break and the water makes them all leave for a bit. Noah.

God finishes a book (ten commandments I’m guessing) and people show up at his doorstep (Sinai) to read it. But they turn rebellious (as the Israelites did). Soon after, mother(!) gets prego and has a son (Jesus) who is killed (Jesus) and whose body and blood is eaten and drunk by the people (Jesus).

Finally mother(!) has all she can take; she burns down the house and kills everyone. God then rips out her heart and recreates the earth with a different woman rising from bed, married to God, soon to have their quiet house invaded by man all over again. None of that part’s in the Bible, but whose counting?

That’s the movie: “God is evil for letting His creation ruin mother earth.”

That’s not a message, that’s a cliche that mixes its metaphors to the point of becoming incomprehensible.

And yet, despite all of that, the first half of the movie was really good. Throughout the opening hour, we watch as mother(!) deals with the house guests who eat her food, break her dishes, clog up her toilets, etc. As more people arrive and populate the house, only mother(!) feels the claustrophobia and sense of violation. We feel it too, because for all his storytelling failures, Aronofsky really knows how to shoot a scene. But after that first hour is ended, the movie’s peak ends too, and then begins a steady downturn in quality, where the movie becomes less gripping and more eye-rolling in its pointless metaphoring and wannabe “message” having.

5/10 – a one-hill rollercoaster, climbing up and up for the first half, building tension and claustrophobia brilliantly. After it peaks, however, it turns downhill for good, getting louder, dumber and blunter by the minute.

The bad parts of mother! are worse than the great parts are good.