That was a rumor floating around the interwebs. Sony of course owns the film rights to Spider-Man and its related properties. Disney is now working alongside them to feature the webslinger in their Marvel Cinematic Universe, but Sony is still in charge of any solo outings featuring the character or any related characters. At one point, the studio had everything from “Amazing Spider-Man 3” to “Spider-Man Origins: Aunt May” in development. They were going to have movies based on Madame Web, Black Cat,  Venom, Carnage and—no it’s not a joke–Aunt May, all released as their own Spider-Man Cinematic Universe.

After the Disney deal was finalized, Sony seemingly abandoned their ambitious plans and concentrated  on rebooting the Spider-Man property with Tom Holland in the lead. That movie is coming this summer, but the strong excitement generated by his appearance in Civil War seems to have given Sony the gumption to get the band back together. The studio announced that plans for a Black Cat movie were back on, as well as a movie featuring Silver Sable (though they may team up in one film). In addition, Sony has promised that a Venom movie will happen, due to the continued popularity of the villain.

But when the trailer for Life appeared several months ago, some began to wonder if the movie wasn’t a covert origin story with enough details left out to allow for plausible deniability.

Again, there is nothing in the movie to directly tie this story with anything in the Spider-Man universe. All the connections are coincidental…unless the studio decides to retroactively make it a prequel. In that case, there is more than enough material in this movie to make it work. And what’s most amazing of all, is the fact that the movie is good enough that I was disappointed when no overt connection was made by the time the credits rolled. 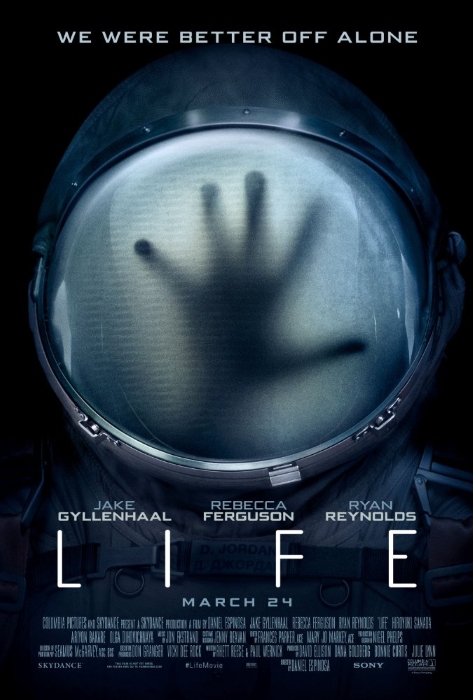 Setting aside the Spider-Man talk, the franchise most people will think of while watching the movie is 1979’s Alien. Both films feature astronauts on a ship, isolated from all others, who bring aboard an extra-terrestrial life form that grows in size and picks off the crew-members one by one. Those are very broad strokes however and there are several notable differences between the two stories. Alien takes place in the distant future; Life could easily be set a decade ahead of us. Alien’s crew of the Nostromo are blue collar jimmies and joes working for the man; Life’s crew are scientists and doctors aboard the International Space Station. In Alien, the organism is brought on board unintentionally (or at least, that’s what the crew thinks); in Life they wanted it on board intentionally to study and catalogue it. Alien seamlessly transitions from pure sci-fi movie, to thriller to outright horror, from one act to the next; Life cuts right to the tension and, apart from one or two moments, never totally embraces being a horror movie.

In fact that’s probably the biggest flaw in the film: The opening half does such a good job making you invested in the movie that it fails to sustain its level of quality through to the end. As such, most of the compliments to be had are based on what happens in the first 45 minutes. The second half of the film is very by-the-book, with few surprises and a plot progression that feels a little too much like checking off a list than it does watching real people make real (smart) decisions. Other than the actual ending, there’s no risk-taking in the back-half.

But that first half is really well done.

I appreciate a movie that cuts to the chase but also refuses to rush things. The first act of Life features a steady forward progression, with no wasted dialogue or moments. At the same time, however, the pace is not hurried. Scenes are held so that you can appreciate the beauty of space or the ballet-like movements of astronauts in zero-G. The score is subtle but occasionally, early on, is allowed to flourish. You might even be reminded of 2001: A Space Odyssey (though nothing in it is that ambitious) 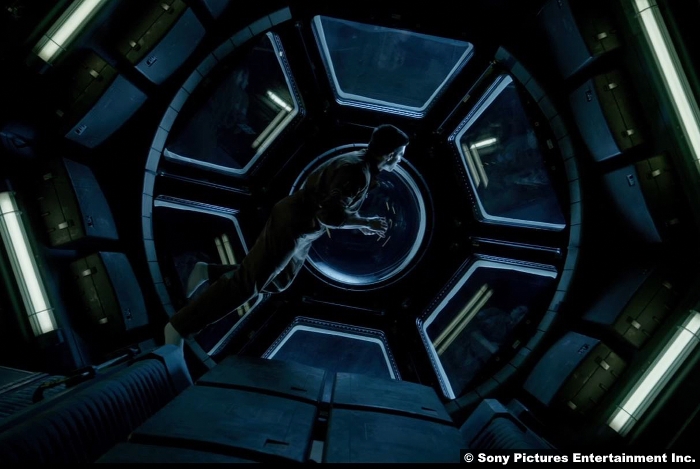 Early in the film, the crew works to reel in a probe using the Space Station’s giant mechanical claw. This is actually the first scene in the movie and even though the audience is given nothing to go on—not even the names of the crew and certainly not any moments to help us develop an affection for them—the scene is so tightly shot that the moment the Station manages to grab the probe you’ll want to celebrate with the crew. That’s good film-making.

Once the probe’s Martian sample is recovered and the titular life-form is studied, the movie sustains a feeling of dread. You know what’s coming; you know the tiny little organism will mutate or evolve or…something and begin its rampage, but the movie is patient with its payoff. Instead it gives us needed character background and only teases the alien’s capabilities. The action doesn’t even start until half-an-hour into the movie, but every scene leading up to it is necessary to make the pay-off work as well as it does. All the fat and unnecessary exposition that usually pads these sorts of movies was left on the cutting room floor. This really is one of the best-edited thrillers in recent years. 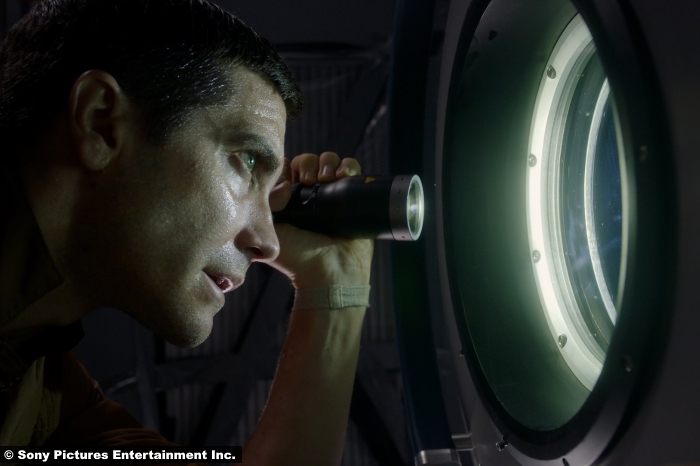 But then the second half happens, and it’s just the same “trapped in space” movie you’ve seen a hundred times. It’s still really well made and hopefully director Daniel Espinosa gets to sink his teeth into movies with bigger and bigger budgets going forward. But in the end, you’ve seen this movie before: Characters “run” (float) from monster, turn the corner and think they’ve lost it only to turn around and BAM, right in the face. Characters think they have the monster cornered, try to kill it with fire, but it outsmarts them and gets away. Astronauts try to “flush it out an airlock” (the Battlestar Galactica fan in me always enjoys that line) only to have the monster be “incredibly adaptive at surviving” or something. It gets back in and the last hope is to kill the oxygen and try to suffocate it, going down nobly with the ship…only to suddenly remember “we have lifeboats!” All the boxes are checked, and even though the filmmaking is good, it’s let down by the routineness of it all.

Spoiler warning for those who care about such things… 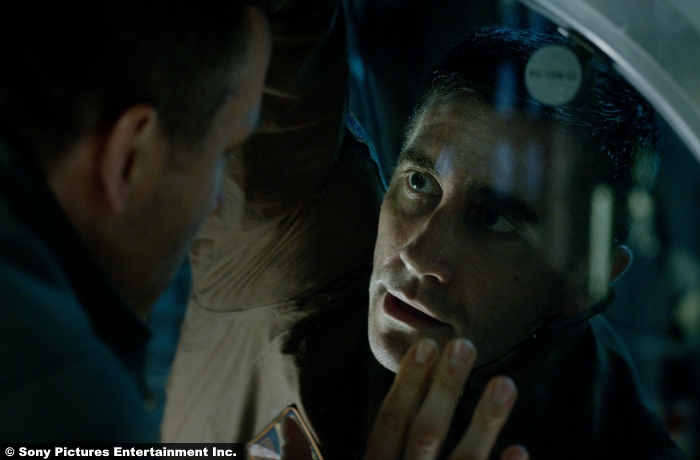 In the end, there are only two survivors left, one decides to sacrfice himself by luring the alien into a lifeboat with him and then blasting off into deep space (which can only be done manually), allowing the other astronaut to take the remaining lifeboat and fall gently to earth. However complications arise and earth-bound ship hits some debris. Meanwhile, the alien-inhabited ship tries to take control away from the astronaut piloting them into the abyss. Sly editing makes it unclear which ship is going up and which is going down, but in the end one of the lifeboats lands in the pacific ocean and is discovered by a couple fishermen. They peer inside the window only to see the alien has basically made a little cocoon for himself. The sounds of the astronaut screaming “no don’t open the door” mean nothing to these fishermen, who promptly crack open the door and then….cut to black. The end.

It’s a pretty ballsy move to end with the monster not only winning but presumably ready to wipe out the human population. Say what you want about the movie being an Alien knock-off; Alien ended with Ripley victorious and the monster defeated. This movie ends with the goodguys dead or dying and the bad guy successful in getting to earth. The story did a good job establishing how resilient the creature is, as well as its ability to grow exponentially in just a matter of days. One character theorizes that a race of them might have once ruled over Mars for millions of years. Imagine what it could do on earth! It would take a superhero to defeat it…

I’m not saying it’s a Venom prequel. I’m just saying if the movie is successful I wouldn’t put it past Sony to come out and say “it is now!” And if it is, it’s actually not a bad way to do it.

8/10 – An almost flawless first half is dragged down by a paint-by-numbers second part, and then redeemed by a good ending. The final result is a work that is good, but not much more than that.

Be forewarned: This movie is nothing like the board game!