Five days. Five days? Five days. Fünf Tagen. That’s how long the Mist has been in town. I was being generous last time when I guessed a week. I’m so grateful to the Mother of Snakes herself, Taylor Swift, for releasing her new single just as the episode finished, so I had a momentary distraction.

Now back to this. When we last left off, Eve, Alex, and Adrian were caught by the main mall group. This week, we begin with their being put in the same storage room as Jay. Alex and Jay start to comfort each other, which sends Adrian into fits. He beats Jay with a paint can, while telling Alex and Eve a horseshit story about how he and the “late” Kevin found out at the hospital that the “DNA test” said that Jay was the rapist. They don’t process rape kits at St. Rando’s Community Hospital, but I guess SVU doesn’t air in Mistville.

Anyway, that was getting on my nerves so much, I called for Kevin. And he appeared! Thank Mist he is finally at the mall. The first person he runs into is Mia, who, as you might guess, is quite surprised to find him not dead. He explains what happened and then they split up to look for his family. 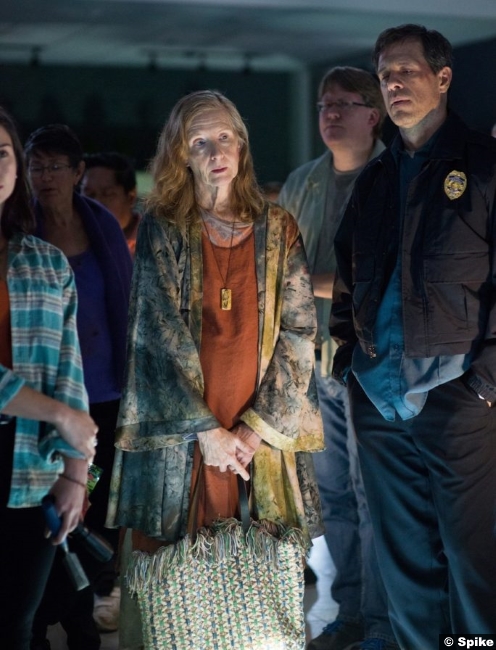 Also at the mall? Connor and Nathalie. Everyone’s thrilled to see Connor, because they think that help has arrived, but he just wants to find Jay. Gus is more than happy to turn him over, because he just wants to keep order in his mall…which has turned into a nightmare after, I repeat, FIVE DAYS. The storage room gang is happyish to see Connor too, until he just takes Jay and leaves. However, he and Eve share a look that clearly telegraphs that he’s Eve’s biological father.

And whadya know? He is! This little reveal is saved for when Alex and Eve are brought out to the main mall group for their show trial. There’s a scuffle and Kimi is shot by Kyle, then the group starts grumbling for Alex and Eve to be pushed out into the Mist. Eve pleads for Connor to do something, to save his child, but he’s frozen. Plus, he’s already pushed one child into the Mist. After nothing happened, after the Mist didn’t dissipate, Nathalie tries to reassure him with the idea that Jay’s probably not dead yet. When he dies, the Mist will end. It is candy-colored nonsense and you can see Connor starting to wake from her spell. However, he’s so stunned by the news that Alex is his daughter that he can’t move to stop the crowd. 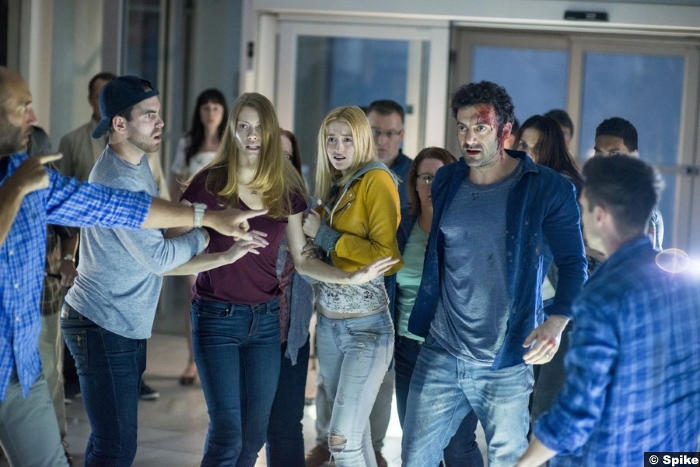 Meanwhile, Kevin has found Adrian and beats him to a pulp before Mia stops him, telling him they’ve gotta get out of there. She’s already found Jonah, who’s now leaving with Wes to go back to Arrowhead. Write if you get work, I guess. She and Kevin go to the main mall group, where he is finally reunited with his family. It should be a nice moment, but of course, Gus spoils it by telling him that Connor is Alex’s father. I guess he thought that Kevin didn’t know? I mean, he didn’t know it was Connor, but he did know it wasn’t him. Anyway, Gus played himself.

But it doesn’t matter, because they’re all pushed out into the Mist: Kevin, Eve, Alex, and Mia. They make a run for the Jeep, where I guess Vic is still just chillin’, but Alex is caught up in a Misty snakelike formation. Man, Taylor Swift’s media penetration is good. Jay, who’s still alive, helps her break free from it, but then he’s sucked up in it. Alex tries to go back for him, but her parents won’t let her, and Jay dies. But the Mist doesn’t stop. 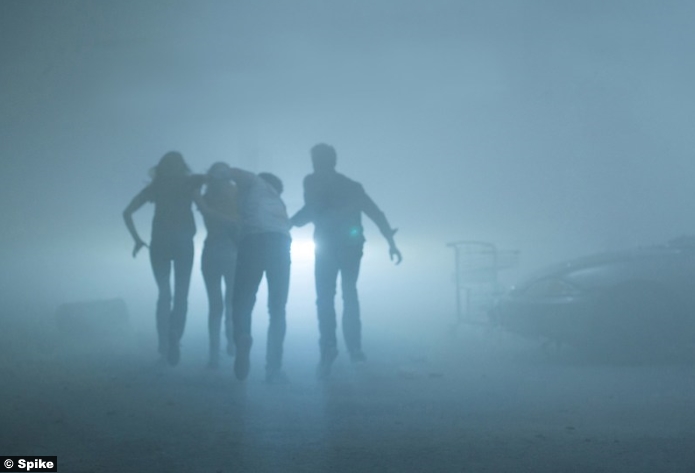 Now Nathalie is saying that once the foursome is killed, the “Black Spring” will end. She’s babbling on about baby bears and nature and you can tell no one wants to hear this shit. Connor’s wandering around in a daze.

Once the group is in the Jeep, where it turns out Vic was just chillin’, Kevin starts to drive off, but then he stops and makes a move that should be enshrined in the Petty Hall of Fame. He floors it in reverse into the mall, shattering the glass doors and letting in the Mist. Connor helps free the Jeep from the door frame and accepts Alex’s invitation to come with them.

Meanwhile, the Mist is upon the group in the mall. It brings with it a host of horrors. Kyle is wrapped up in snakes, Shrill Harpy #3 is bleeding from her eyes, and Nathalie turns into a withered corpse. It’s something.

In the Jeep, everyone finds out that Jay wasn’t the rapist. When Eve asks who was, Kevin just replies with a question of his own: who told them he was dead? Speaking of the little squirmy worm, he’s wormed his way into the back of Wes and Jonah’s vehicle. Enjoy whatever experimentation is in store for you, I guess.

And speaking of that, Kevin stops the Jeep when they come upon a moving train. They’re hoping for help, but all they find are just prisoners being shuffled off into the Mist. Kevin says they’re feeding it. FIN.

The ending is obviously supposed to be a setup for the next season, should they ever get one. They probably won’t, but stranger things have happened in the Mist.

7/10 – This was a not great episode of a not great show. It’s really disappointing how often Stephen King’s work is adapted into something mediocre. Then again, he produces so much work* that there are bound to be duds in the adaptations out there. This unfortunately was one of them.

*Like two weeks after reading Gwendy’s Button Box earlier this year, I was like, “When is Stephen King going to come out with something new?” because he’s just that prolific. The answer, by the way, is September. Sleeping Beauties, co-authored by Stephen and his son Owen King, is due for release on September 26. It has already been sold to Anonymous Content for adaptation.