This week in Foggy Bottom, hey! Didja think since they made us see a dead dog last week that they’d keep the animal deaths to a none this week? [In the arms of the angel, fly away from here…]

Well, too bad! We aren’t as unlucky as the moose that careens through Connor’s windshield, granted, but I still don’t feel like I’m in clover. 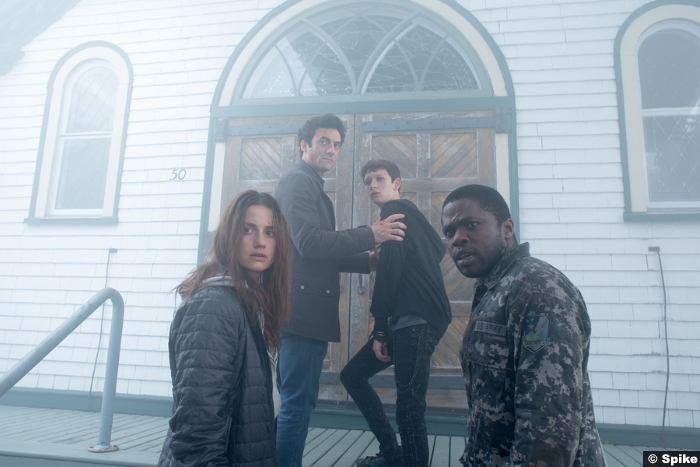 Thankfully, Adrian falls down the stairs immediately after they leave the police station, so I had that. The gang’s grand escape goes sideways almost as quickly. Mia, their getaway driver, is shaken by an encounter with some armed thugs and crashes the car after speeding away from them. Into the fog, men! And Mia!

They make it to a church, where others have sought sanctuary, including a still blood-spattered Natalie. Before they get there, Mia hears a loved one (Anna?) calling to her from the mist. We find out later that Bryan heard it, too. Connor also comes to the church and upon seeing Mia free, handcuffs her to a railing. She’s going through the titular withdrawal, so it’s not great for her. Natalie shakes out of her fog (no pun intended) and liberates some communion wine so that everyone can toast the memory of her husband. The church group is doing pretty good, all things considered. 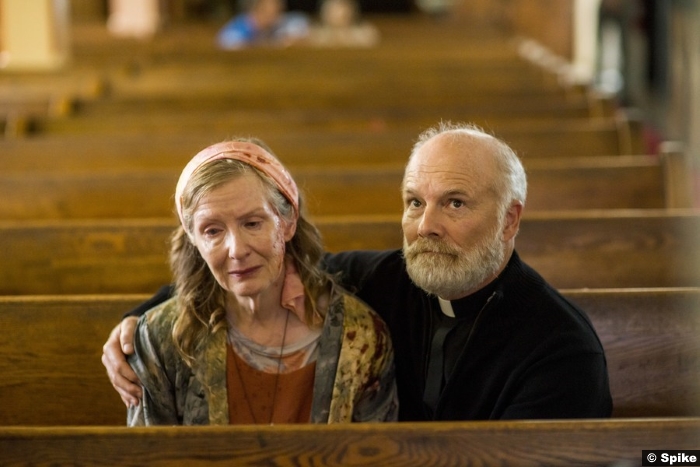 The mall contingent is not. Gus Bradley (Isaiah Whitlock Jr), the mall manager, tries to get everything under control, but it’s hard when bodies start popping up in the mall. One of them has a word written in blood next to it. It could be “Anna” or it could be something else, like the start of “Arrowhead.” Gus directs volunteers to lock down the mall, while a mall visitor suggests they get the emergency radio station public institutions like malls were issued after September 11th. It’s in a part of the mall where a body was found, so they hold a mini-lottery to pick who retrieves it. Eve’s name is picked, but another mall visitor, whom she doesn’t recognize as a local, volunteers to go with her. Once they’re in the office, things get real weird. The radio works, but when the stranger starts sending messages out like “Shadow 41 standing by for report” to “Arrowhead,” Eve is obviously suspicious. Also, he has a concealed weapon, which I assume is very strange in this town. (I grew up thinking everyone had a reloading room.) She tries to leave, but he tackles her in the hall and tries to strangle her. They struggle, she hits him with a fire extinguisher, they struggle some more, and she shoots him dead. Don’t you love the mall? 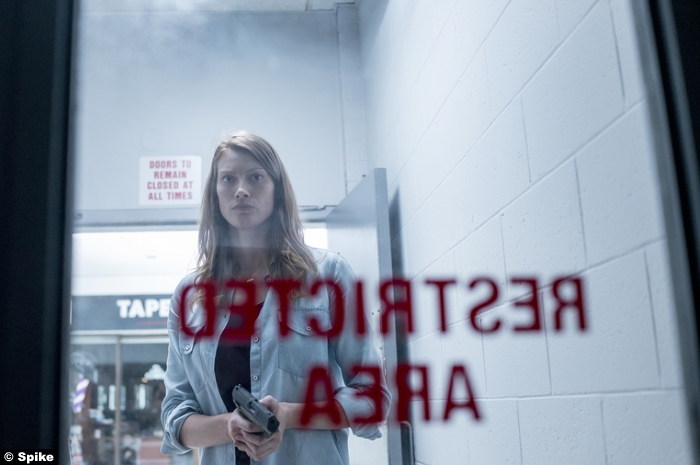 The stranger had two pals with him and Eve tells one of them that they got separated on the way back. As afternoon turns into evening, everyone at the mall beds down for the world’s worst sleepover. Jay gets up in the middle of the night to go to the bathroom, which is where he finds the stranger’s pals hanging dead. What the hell is going on here?

8/10 – The dialogue is clunky, but thanks to cinematographer-turned-director David Boyd, the episode has no lack of beautiful shots. The characters still feel wafer-thin and are still making some questionable decisions, but at least the story is moving forward. Very slowly, yes, but it’s moving.