The Mist S01E08 Review: The Law of Nature – Everything just keeps getting crazier!

It’s easy to resent the happiness of others when you’ve suffered a loss. You want people to acknowledge your loss and to be affected by it. I’m not saying it’s the most rational thought, but it can sting to know that the world outside is spinning just the same, like your feelings don’t matter.

It’s understandable to feel that way, but once you decide to act on that feeling, then you’ve started veering into really irrational. That’s what I thought about when Shelley was so outraged by the sight of Alex and Jay kissing. She immediately reports back to Gus and Kyle and some randos we’ll never need to know. Gus is like, can we take this crazy down a notch? I’m trying to keep this mall from going full Lord of the Flies.

Meanwhile, Kyle says that Shelley has a point and…what is that point, exactly? Teenagers make weird decisions? Their brains aren’t fully formed. Next! Oh, her point is actually that Alex wasn’t harmed by the Mist because she’s part of it? Neeeeeeext! 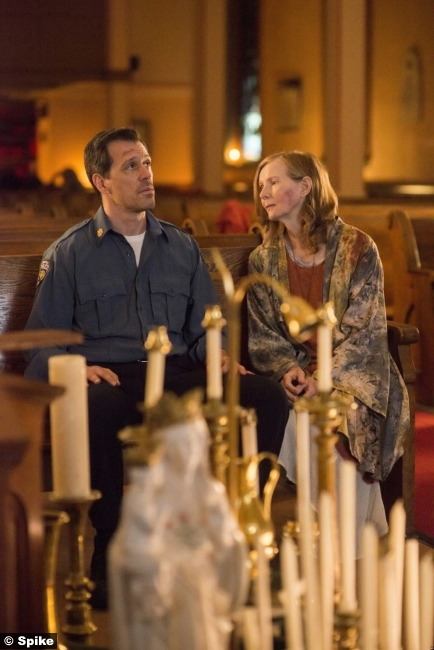 So that’s going to end well. Not that it’s any better on the other side of the mall, as Eve locks Jay in a makeshift cell or any better at the church, where Nathalie is pushing Connor toward a dual “realization” that his son Jay is a rapist/should be destroyed, maybe. She decides that the church group should go to the mall to purge Jay. Apparently, the Black Spring started just after the abuse of a girl, so Nathalie has read the signs and decided that this is the way “to restore order.” Also, it is literally ride or die with her, because anyone who doesn’t want to go to the mall should be killed.

Again, we’re barely what? A week into this? And it’s already that scene from Community where Troy returns with the pizza to find everything in flames. And just when you thought our smallest crew was okay, they go extremely sideways. They find themselves in Adrian’s neighborhood after leaving the hospital so they stop by Adrian’s house so he can check on his family and it’s not great there. It wasn’t great before, but now his mother is dead, taken out by Mist birds. His father tells him he never loved him, but that’s no big change from before. 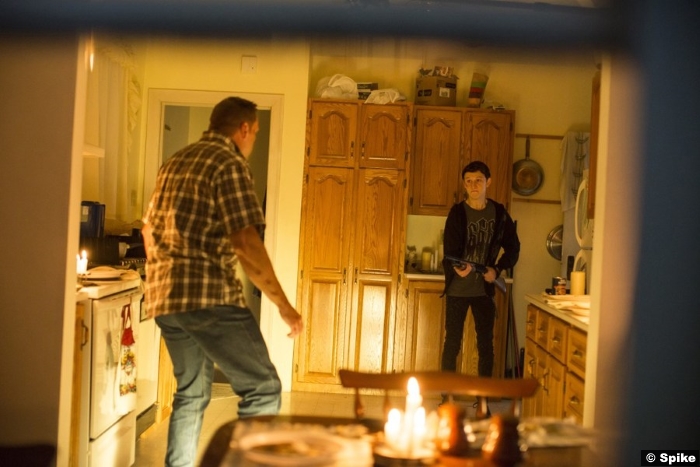 While Bryan and Mia make out—I’m sorry, correction, they have sex—Kevin hangs in the car, where he’s approached by mall evictee Vic, who’s managed to stay alive by “house-hopping.” He tells Kevin the situation at the mall—Alex is okay, but the whole scene is turning into “The Last Stand,” a zombie game where the players turn on each other.

So everyone is headed to the mall. But before then, I feel so sorry for Adrian, as his dad starts filling his head with poison: You’re a monster, your mom never loved you, no one loves you. When Adrian tries to protest that Alex loves him, his dad retorts that Alex will love him only until she “finds someone who can fuck her.” WHOA. My head has only a second to spin at that, because Adrian immediately jumps in to say that he did. So he’s the rapist. I would like to holler that I called it from the very beginning, but this is really not the topic for that. I could harp on the fact that they’ve handled this serious topic with only the hammiest of hands, but they’ve done with all serious topics and we could be here all week. Anyway, he offers up some feeble excuse that he had to, because he couldn’t lose her to Jay and let’s just draw a thick line under that. He raped Alex, so he could frame Jay. In an earlier review, I said that we don’t need to wait for the Mist, because the monsters are already here. Like, right here is one. And if you’re thinking that maybe we misunderstood and that’s not really what he did, he then shoots his dad and slices up his arm so he can claim it’s self-defense when Kevin rushes in to see what the hold-up is. 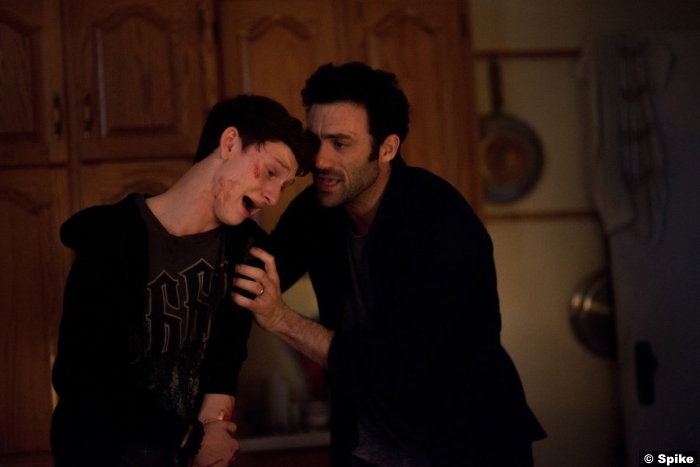 So Adrian’s a liar, just as I originally suspected. As for when everyone else will find out, for most of them it will have to come in a later episode. For Kevin, it will come when he’s rummaging through the medicine cabinet and finds the pills that were used to drug Alex. They end up in a face-off and Kevin might have actually gotten grazed by a bullet—it’s unclear—but he’s certainly knocked a-windin’, as they say in the South. It’s enough time for Adrian to get out to the car and tell the others that his dad killed Kevin.

Back at the mall, Gus confronts Shelley about the fire from a few episodes back that trapped Alex in an office. He urges her to confess or he’ll do it for her, but she has a better idea: he should confess that he has a personal stash of food, which she saw in his office. He’s not into that. In fact, he’s so not into it that he bashes her over the head with a candlestick and then strangles her to death. And if you’re thinking that he was a basically decent man who was pushed to a heinous act in a moment of weakness because of the stress of the situation everyone’s in, you are very generous. But he doesn’t deserve your sympathy, because he immediately pivots to pin the murder on Alex. And that’s the last thing she needs.

8/10 – As the fate of Kevin is unclear and everyone else is heading to the mall, everything just keeps getting crazier. Alex’s rape and its aftermath have never been handled well, so it’s no surprised they fumbled that again. At least we’re getting somewhere. It’s nowhere good, but it’s somewhere.