The Mist S01E07 Review: Over the River and Through the Woods – More craziness

Last week, the hospital crew holed up in the psych ward at the end of the episode after the gennies finally died in the greater part of the building. This week, they meet a stranger, a psych ward employee who is definitely who he says he is.

Ha, just kiddin’. Nash is actually a patient who thinks he can see evil in people. He’s already killed a few. Then he spirits Adrian away because he thinks something’s not right with the boy. At the beginning of the season, I would have been like, “Yeah, obviously,” but the kid’s grown on me. Maybe it’s how vulnerable he looks after the eyeliner is scrubbed away. Maybe it’s the rejection from Tyler he gets after Kevin rescues him from Nash. But I feel for him. 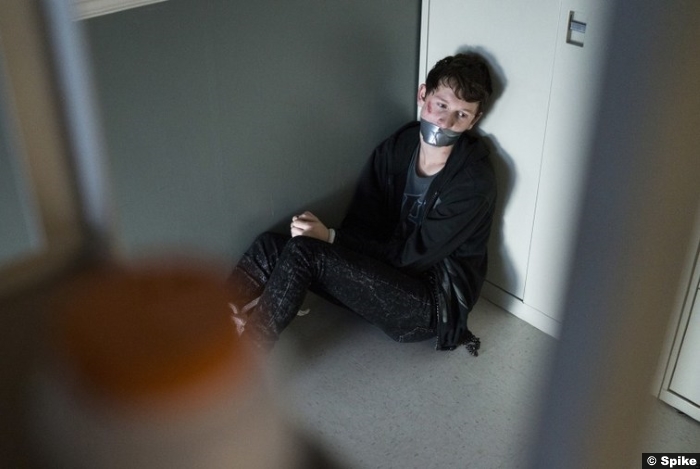 And speaking of that rescue, it comes after Kevin convinces Nash that he’s the real evil one, which he does by describing his violent fantasy of what he’d do to whoever raped Alex. That’s still a thing, by the way, and I wish the show would solve that mystery, because it’s difficult to get a rape whodunit right. Broadchurch is/was doing well with it in the third season [sorry, UK, but we’re drinking tea over ice and just now getting to see it in the US], but I don’t exactly trust this show to pull it off. Anyway, that convinces Nash to allow Kevin into the room where Nash has holed up and then free Adrian. Then Kevin beats Nash to death. Damn, Kevin.

While that’s going on, Brian, whom I guess we’re still calling Brian, is helping Mia go through detox, something she wants to do to regain the trust she lost last week. This involves loadin’ her up with opiate blockers and strapping her to a bed, a process that normally is undertaken with the patient under general anesthesia, which they have to skip. It is as unpleasant for her as you’d imagine, but it does spark a memory in Brian. When he was a slightly younger man, he was strapped to a bed and given electroshock treatment while a woman read off a list of rando words, including lamp, orange, feline, and…mist. Mia makes it through the detox, though, and she and Brian don’t even have to watch Kevin beat a man to death. 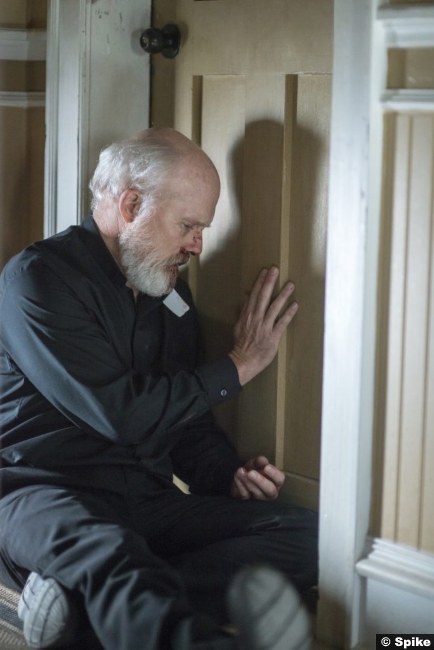 At the church, Connor goads and then punches Father Romanov into admitting that he knew what that little twerp was going to (try to) do to Nathalie and that ends up setting up a duel of belief in which Romanov and Nathalie will face off against the Mist. Two people are going on mission—one of you ain’t comin’ back. When Nathalie appears for their trial, her appearance is very surprising for everyone, including the guy delivering my dinner, to whom my first words were a stunned “She just nekkid.”

Out in the Mist, they don’t have to wait long for something to happen. Quickly, we hear the unmistakeable sound of approaching horses. Four of them, in fact. And I looked, and behold a pale horse: and his name that sat on him was Death, and Hell followed with him.

One of the riders shoots Father Romanov with an arrow and then they all ride off, dragging a screaming Romanov behind them. Damn, Kevin. Later, when Nathalie tells the story of what happened (“nothing” and “everything”), she says that Father Romanov died a painful death and it was ril bad but it was also so beautiful, like a strange bird call. Riiiight. I’m just going to Kool-Aid Man back out of the church and check in at the mall.

Oh, they’re even crazier? Cool. Eve has the bright idea to plant a baby monitor down with the main group to check on Jay’s story that they’re getting scary. And it’s true! They’re only like, less than a week into this and already things are getting a mite bit terrifying. I thought the real cult-scariness would come from the church and it still might, but never count out the awesome power of large groups to do some frighteningly dumb stuff. It is still a little hard to believe, though, this early in the game. Kyle, the security guard, is like, “I’m starving” and I’m like, “You haven’t even skipped a meal yet.” Some people don’t want to wait for things to get dire before they get dire, though, I guess. But everything happens so much. 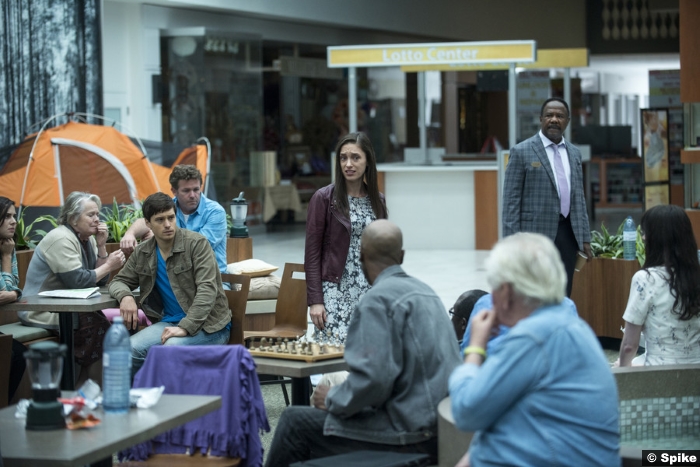 Like, Shelley, the mom of the Mist-swallowed little girl, is now in a committed relationship with Kyle? And she is back on her bullshit about how Alex is a liar. But she seems to believe her at the same time, because she also says that the Mist didn’t want Alex, which is pretty much what Alex said. She quickly pivots to “Alex lied about being raped,” and it’s always a good sign in times of crisis when people begin to create scapegoats. She’s going to end up tossing Alex into the Mist, isn’t she? Damn, Kevin. You better get to the mall.

7.5/10 – This was better than last week, mostly because of the four horsemen. Their appearance was both ridiculous and unnerving, a balance the show would do well to try for more often. I didn’t get the significance of the episode title, though. I mean, “to grandmother’s house we go,” obviously, but what does it mean in the context of this episode?