The Mist S01E09 Review: The Waking Dream – It’s dark and full of terrors…

For a show called The Mist, the actual Mist hasn’t played much of a part for the last few episodes. Sure, Nathalie and (the presumably late) Father Romanov had their trial, but for the most part, the real danger has come from people. As usual.

That changes only slightly this week, as we do finally see the Mist again, but the worst things are predicated by the actions of men. And one increasingly terrifying woman. In fact, in light of this whole Project Arrowhead thing, I’m reminded of “The Monsters Are Due on Maple Street,” with the way that neighbors turn on each other with just the slightest provocation. I’m surprised no one has accused anyone else of actually being the Mist. I mean, Shelley came pretty close with Alex.

Back in the neighborhood, it turns out Vic didn’t go with the gang to the mall, so he finds Kevin, who’s alive and sporting a nice goose egg. He tells Vic about Adrian and they work out a plan to get to the mall by house-hopping. Kevin does have a Mist-influenced incident in which he sees people he’s killed or let die, but my theory that Kevin can’t actually be killed by the Mist continues to hold. They stumble on a house with two dead soldiers in it and one live resident, who’s apparently killed them. He’s paranoid, as one might be in this situation, and ends up killing himself with a grenade. Jumping away from that is the last thing concussed Kevin needs, but at least he and Vic have some supplies and a military vehicle to use to get to the mall.

They don’t make it in this episode, but Brian and Mia do. Brian, whom I guess we have to start calling Jonah now, leaves Mia in an office to rest, since she did just detox. Before he leaves her, though, they make promises to go away together if the Mist ever clears up. 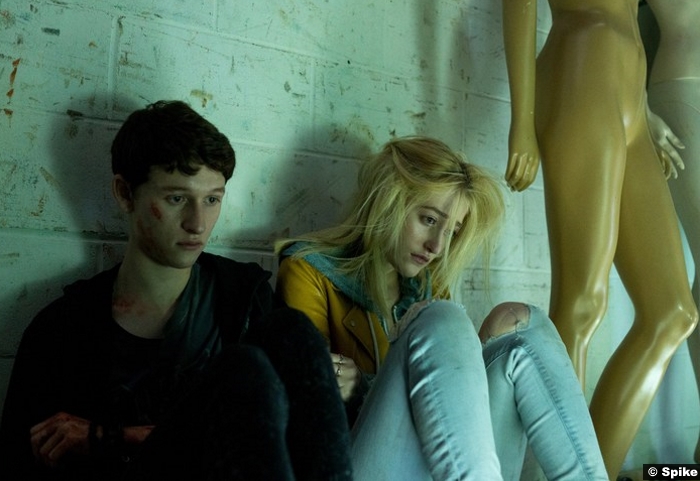 Jonah ends up running into and scuffling with that one Project Arrowhead soldier, Wes (Greg Hovanessian), who’s still in the mall, and that’s how we find out that Jonah is a superior officer. We learn literally nothing else about Arrowhead, except that those soldiers were probably part of it, so let’s put it back on the shelf. Just like this show!

Elsewhere at the mall, Gus is spreading the lie that he saw Alex kill Shelley and I don’t understand why anyone would believe that. Others in the mall are starting to get a little  suspicious about his story, but they need to get more. I need one person to ask, “Wait, little Alex with the wrists like matchsticks beat a grown woman to death?” It doesn’t pass the smell test. Maybe the Mist short-circuits your logic or something.

Also at the mall, we see Adrian tearfully telling the story of what happened to Kevin and it takes only a few seconds for me to realize that he’s practicing for when he tells Alex and Eve. Then he actually runs into them and I gotta say, his rehearsed story is much better. 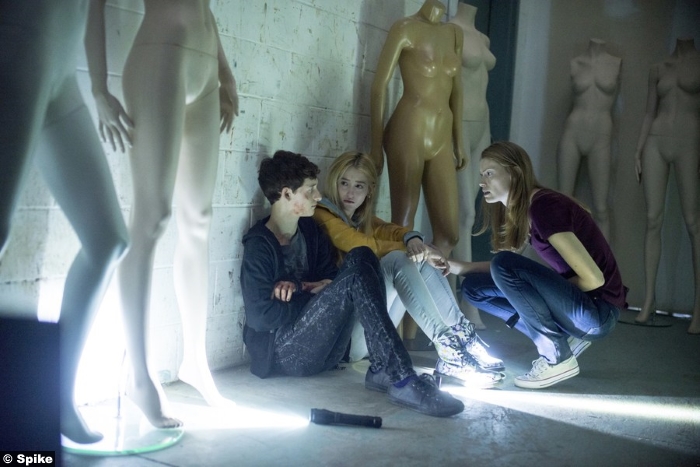 That’s about the same time that Gus and company find Alex and she’s confronted with the accusation that she killed Shelley. Of course she denies, because it’s ridiculous. They also bring up Jay and she and I are both like, “Wait, is he dead?” No. They just think so because they haven’t heard from him in a minute. They’re all such lovely people; I don’t know why he’d be avoiding them. It’s not like he moved camp so he didn’t have to live with them anymore.

Eve ends up showing them where she’s keeping him and Jay and Alex have a nice reunion, watched over by a murderous-looking Adrian. Watch your back, Jay! 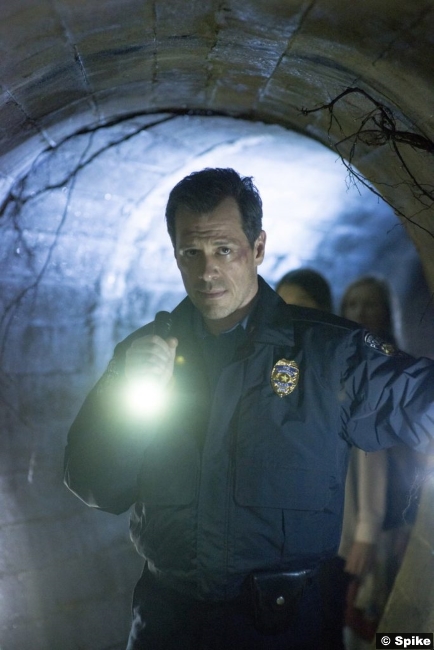 Earlier, Jay and Eve had a moment where he told her that she was wrong about his father supporting him, because Connor believes he raped Alex. And speaking of Connor, he’s fully drinking Nathalie’s Flavoraid now. He’s shown the church group underground tunnels they can use to travel to the mall. When poor Trevor (Darcy Lindzon), a church group redshirt, falls in a hole—it doesn’t matter how—and breaks his leg, Nathalie coos something about gazelles leaving wounded herd members behind. When Mrs. Redshirt, Ursula (Laurie Hanley), protests, Connor stabs her and pushes her in the hole, too. They are immediately set upon by rats. Again, this has been like, a week. What do these people do when there’s a blizzard? Kill everyone in sight, I guess.

So everyone is still pushing toward the mall, which is where everything’s going to go down next week in the finale. This far into the season, I don’t have the greatest confidence that they’re going to be able to pull off…anything. But we’ll see next week if the show is able to stand its ground or dissipate like so much mist.

7.5/10 – It’s still so hard to believe that these people have turned so blood-thirsty in such a short period of time. Then again, on Maple Street, all the aliens had to do to start a riot was fiddle with the electricity for a night. Still, there are horrors within the Mist—that woman randomly pinned to a tree with a golf club that Kevin saw was a creepy visual—and I wish we’d get to see them more. The little we did see in the episode made an impact, though.