In the film version of Stephen King’s novella The Mist, the mist comes early and it doesn’t take long for the small community of Bridgton, Maine to fray and collapse. In the TV version, we have a lot more time to fill.

That means that the mist–excuse me, the Mist–doesn’t come to town until ’round about 40 minutes into the episode. That is plenty of time for us to see that it won’t take much for this community–now Bridgeville, Maine–to fray. Sandcastles have more structural integrity than this place. 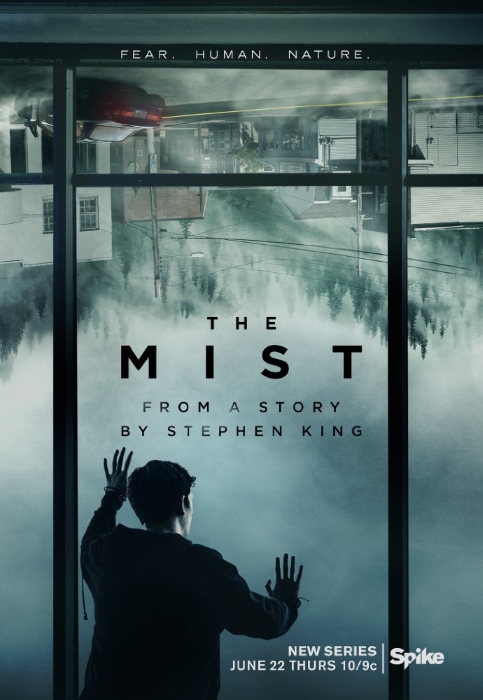 But before we even get to town, we meet Bryan (Okezie Morro), a soldier who wakes up with no memory of who he is or how he got to be asleep in the woods. If that isn’t bad enough, there is the Mist on the horizon and his dog is soon dead. Let’s just put it that way, because the full description is unpleasant and I can’t believe Spike made me look at that with my own two eyes. (RIP, Rufus–you were too good for this world.)

Bryan comes to Bridgeville, bearing news of a vague terrible something on the horizon. With that depth and breadth of info, the small town police are not inclined to believe or help him and they are even less so when he tries to take one of their guns. That gets him thrown in a cell. The sight of a black man being man-handled by the police might make your mind go to some ugly places, but this show doesn’t dwell there. 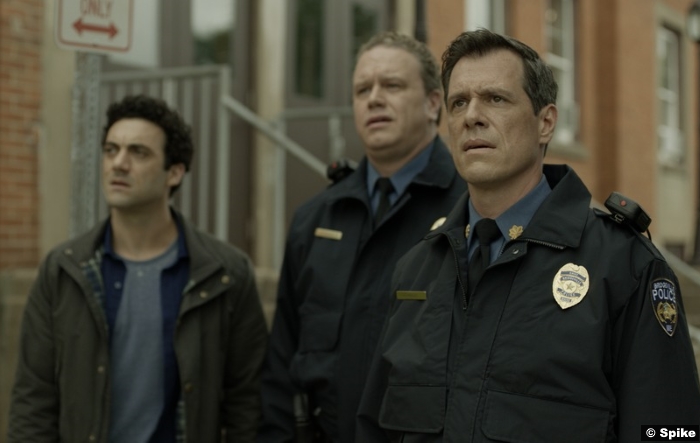 That’s because the show decided to go to another ugly place: rape. To that end, we meet the Copeland family: Mom Eve (Alyssa Sutherland), Dad Kevin (Morgan Spector), and daughter Alex (Gus Birney). Alex has it got bad for teenage dream football player Jay (Luke Cosgrove) and is thrilled when he invites her to a party. Eve puts the kibosh on that immediately to Alex’s visible mortification, but later, Kevin tells his daughter to sneak out. She can go to the party on two conditions: she takes her friend Adrian (Russell Posner), who looks like Jonathan Tucker’s kid brother cosplaying as Orin from Parks and Recreation, and no drinking.

Alex and Adrian go to the party, where some boys give Adrian guff because he, quite frankly, looks ridiculous. Jay defends him, though, and you can practically see the big, red cartoon hearts around Alex when he does so.

The next morning, Alex isn’t in her bed, but sitting outside. She looks stunned. The story she tells her parents is sadly all too familiar: drinking, blackout, blood on the sheets. When she came to, in a bed, she realized someone had raped her. Adrian told her that he saw Jay on top of her. I don’t know if I buy Adrian’s story. Something feels off about it. 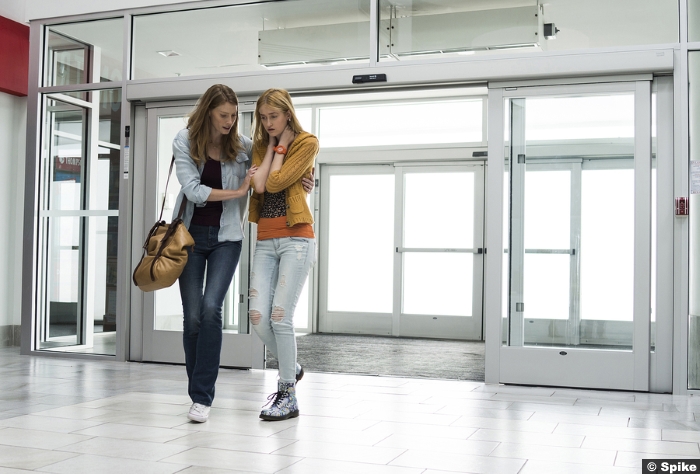 The showrunners said that they were inspired by the Steubenville case, which could hint at worse to come for poor Alex if the Mist weren’t already on its way. But before it comes, did I mention that Jay’s dad (Darren Pettie) is the chief of police?

You can feel the contours of the case already, sense the narrative that will be constructed. Eve, a teacher, was just suspended for teaching a sex ed class that was waaaay lighter on abstinence than Bridgeville’s pearls-clutching parents would have preferred. And apparently, in her youth, she was what my dad would call a “fun girl.” You just know this town is going to use that to grind Alex down to a nub. They’ll say that clearly, she’s just making up a story about good boy Jay and even if it were true, she was a loose gal who wanted it. Tale as old as time.

Elsewhere in town, Mia (Danica Curcic), a mysterious junkie, kills a man with a pitchfork, tells an Anna Lambert’s gravestone “I’m not sorry,” and unsuccessfully tries to steal a bag of money from another man’s house. That man calls the cops, which gets Mia a seat in the cell next to Bryan.

Slowly, all our players are moved into position. Kevin goes to the police station, which puts him there with Bryan, Mia, and Adrian. Eve and Alex go to the mall. The Copelands’ next door neighbors, Benedict and Natalie Raven (Derek McGrath and Frances Conroy) are at the library. Cue the Mist. 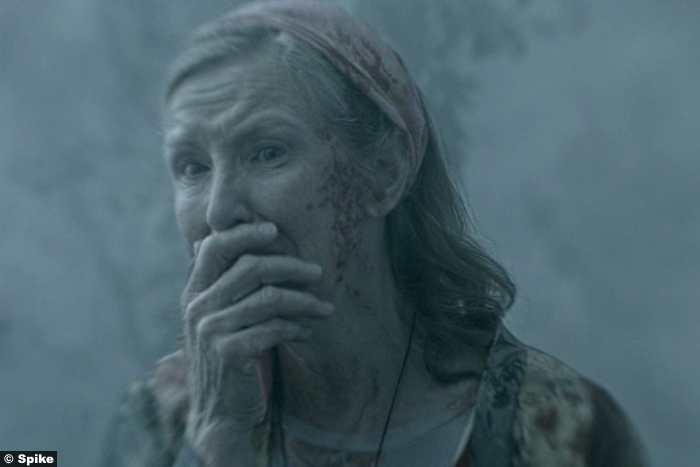 At the police station, an officer stays outside to take copious selfies and gets a head full of mutant roaches (?) for his trouble. Jay’s dad, Connor, abandons everyone at the station, so Kevin frees Mia and Bryan. Mainly he does that because Mia is yelling that he’ll doom them if he leaves them and he “knows that.” How would he know that? What do YOU know, Mia? Officer Roachface comes in shrieking and Mia shoots him in the head. And everyone’s okay with that, apparently. At the mall, a mean mom snaps at Eve and Alex and stalks off into the Mist. After a scream, she reappears at the glass doors minus her lower jaw. Something snatches her back into the fog. No one’s leaving the mall now and that includes Jay, with whom Alex is trapped. At the library, the blissful Ravens are deciding that maybe the Mist is a little too heavy to bicycle home through, when a stranger appears. He wants to know if they’re real. Before he gets an answer, he shoots Benedict. Then he turns the gun on himself.

We still don’t know exactly what’s in the Mist or where it came from, but we don’t have to wait–the monsters are already here. That’s another tale as old as time.

6/10 – While it does an okay job at table-setting, the characters and plotlines are drawn in such broad strokes as to be almost generic. Goth kid, (possible rapist) jock, stranger with mysterious past, etc—these are all types. They’re not real characters. There is real potential in this show if it just gets a little bit subtler.