We always knew it wouldn’t have a happy ending. You only have to look back at any Purge, like The First Purge. It ends with the triumphant strains of Kendrick Lamar’s “Alright.” And as he announces that “we gon’ be alright,” you believe it…until you remember the name of the movie.

A lot of hurt and terror and death followed. But the song wasn’t wrong. We can be alright. That’s the ultimate message Esme is trying to push as her plan is fully revealed. As it turns out, she doesn’t need to worry about that one random Purger at all. The real trouble, as it usually does, comes from inside. 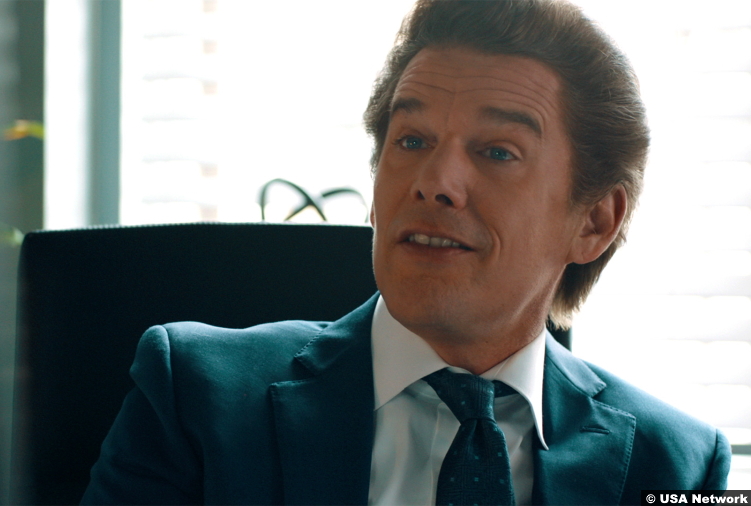 What she’s planned to do is disseminate the footage of a NFFA hit squad conducting an off-Purge murder (when they killed research subject, Olivia). However, since system protections keep files from being transferred outside, she’ll have to do it the most perilous way: by broadcasting it over the emergency system.

The pre-credits scene, which saw a return from Purge veteran Ethan Hawke, already taught us how secure the broadcast room is. So getting in requires Vivian to steal an access key. In the interest of being charitable, I will say that she’s a little unconvincing. So unsurprisingly, Curtis is alerted and corners them in the stairwell.

This is a great tense scene. I couldn’t even look–I had to look at my online Christmas shopping, while watching the scene out of the corner of my eye. Because it seems for a moment like he’ll let them go, but for some people, the poison is in too deep. So he aims and fires, but Vivian jumps in front of the gun. As we’ll later find out, she’s fine, but Curtis isn’t. 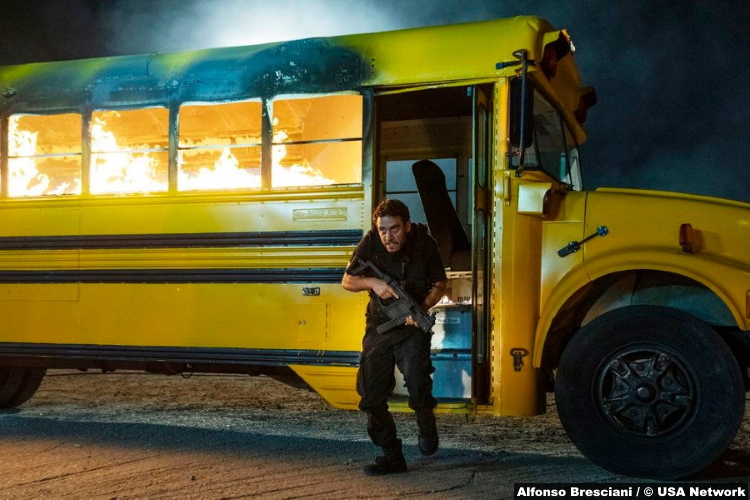 Esme manages to make it into the broadcast room, just as Ryan’s crew manages to finish the money part of the heist. It’s not without incident. Although they trap the loot-carrying Jackals just fine, they end up in a fire-fight with more random Purgers. It’s actually kind of funny, though. Sara, Doug, and Tommy are having a shoot-out, while poor Ryan is having to knife-fight a woman under a truck. 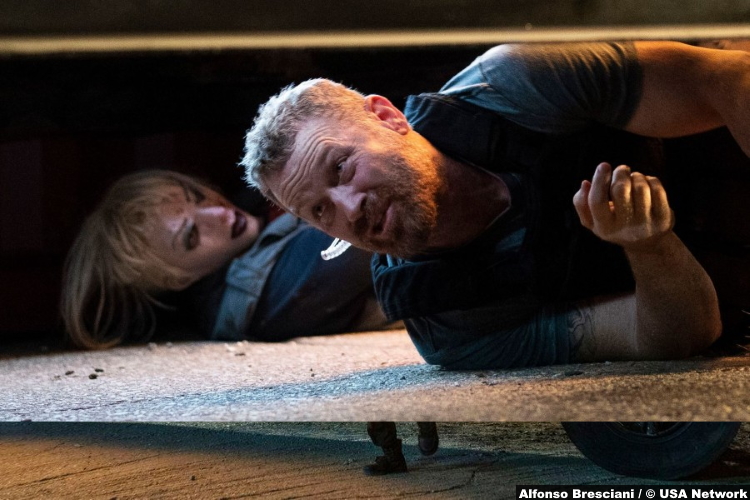 They get it done, though. And they get away with it: so much money and jewelry and other valuables. They’re going to be fine and their families will be, too. But as they pick up a radio transmission that Esme has been marked for termination, Ryan can’t leave her to fight alone. So he heads over to the NFFA center. 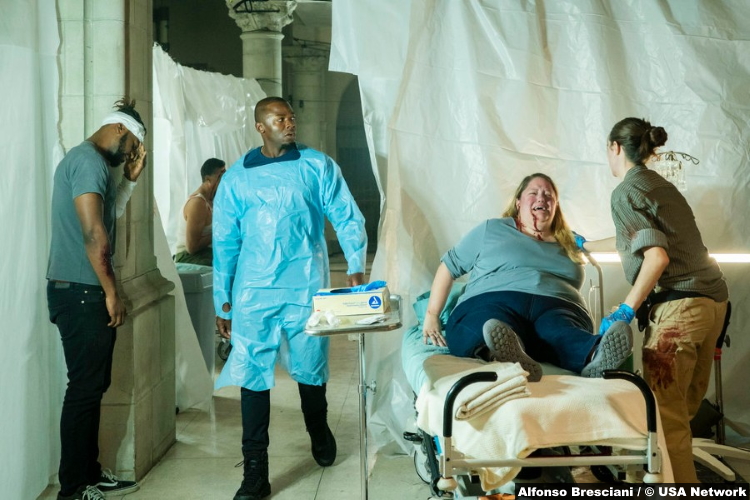 Meanwhile, Marcus and his group have made it to a triage center. Michelle is going to be fine, so as she’s recovering, Marcus volunteers. He meets a green, but enthusiastic med student named Lindsey. Everything proceeds as it should, until it doesn’t.

Marcus can’t find one of the other doctors. Then he can’t find Lindsey. Finally, he follows a blood trail, where he discovers a horrific sight: a pile of slashed bodies. Lindsey’s lying there, blood pouring from her neck. She can barely tell Marcus what’s happened before Ben, who recovered just fine from the hit-and-run, is on him. 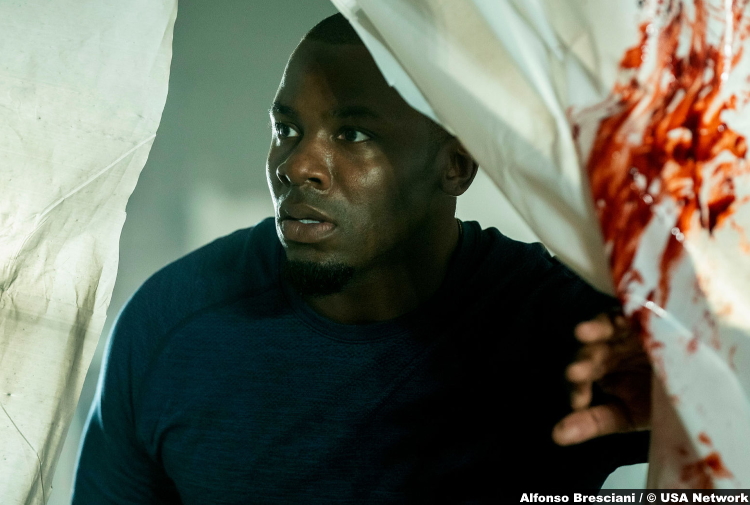 They tussle, but Marcus, the guy who was marked for death because he “killed” Maisy, can’t kill Ben. He just sedates him and leaves him outside. Now, you could argue that it was still immoral, I suppose, but it ends up really being a gift. Being conked out like that, he probably looked dead, which kept roaming Purgers away from him. Anyway, he lives to celebrate another Purge. And if you’ve noticed I’ve left out his movie villain monologue…yeah. Ain’t nobody got time for that nonsense.

Because there are more important things to discuss. After Ryan enters the center, he moves through it like a hot knife through butter. It’s a bit unrealistic, but it is fun to watch. And he makes it to the broadcast room, where he stands guard, not letting anyone near Esme. He’s going to keep her safe until the Purge is over, when they’ll only be able to arrest her.

And he does that, and she gets the message out, but they won’t make it. Ryan is shot just before the Purge ends. Esme comes out after the sirens end, but the termination order stands. As the hit squad leaders absorb this information, Esme points out that she was right. We love a gal whose last words are “I told you so.” 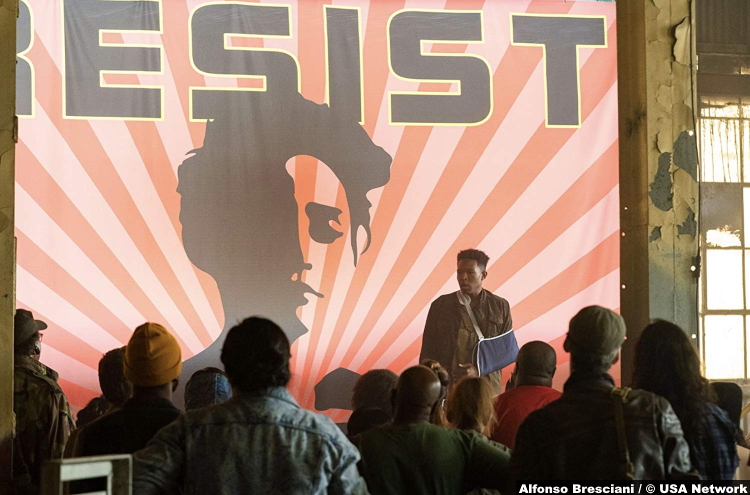 But her earlier words, when she sent the broadcast, resonate, because 2 months later, a resistance movement has been born. Funded in part by Ryan’s share of the heist loot, Esme has become the face of a movement that will eschew thoughts, prayers, and your stinkin’ grief boxes in favor of action. Not everyone will buy into it–after all, we’ve learned that the Purge can fundamentally alter your brain. But some people will. And then maybe more people. And then they could be alright.

9/10 – While I still can’t decide what season I liked best, I do know I’d like to see another one. I’m just not sure where they could go after this one. I s’pose they could show us another city. What would y’all like to see?